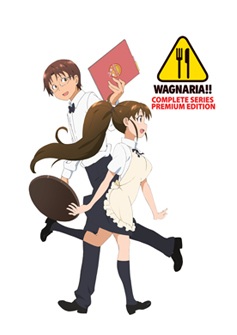 Overview:
There are many ways that anime has tackled slice of life material. The usual set up would either revolve around the characters’ home or high school but that appears to be a bit too common now. Especially for the people at Aniplex’s A-1 Pictures because they have adapted WORKING!!, a yonkoma (four panel) comic manga and turned it into an anime series. Now, NIS America has brought it overseas as WAGNARIA!!, and with a unique setting and characters will it be an enjoyable slice of life comedy?

Story:
Nearly the entire show takes place inside the place where all of the characters work, Wagnaria. The restaurant has become understaffed after becoming more popular. The manager, Kyoko Shirafuji, passes along the task of hiring a new worker onto Poplar Taneshima who accepts the task. Now Taneshima has a special trait about her which attracts Sota Takanashi to even help her out in the first place after she bumps in to him on the street.

What makes Taneshima unique is the fact that she is extremely tiny. Takanashi originally mistakes her for a lost child but is quickly told not to worry because Taneshima is actually a seventeen year old high schooler and needs a part-timer to help out at the restaurant. Now after hearing this Takanashi readily accepts her offer due to his love of anything small. Little did he know that, although Wagnaria is just a normal restaurant, the staff that work there are far from normal. 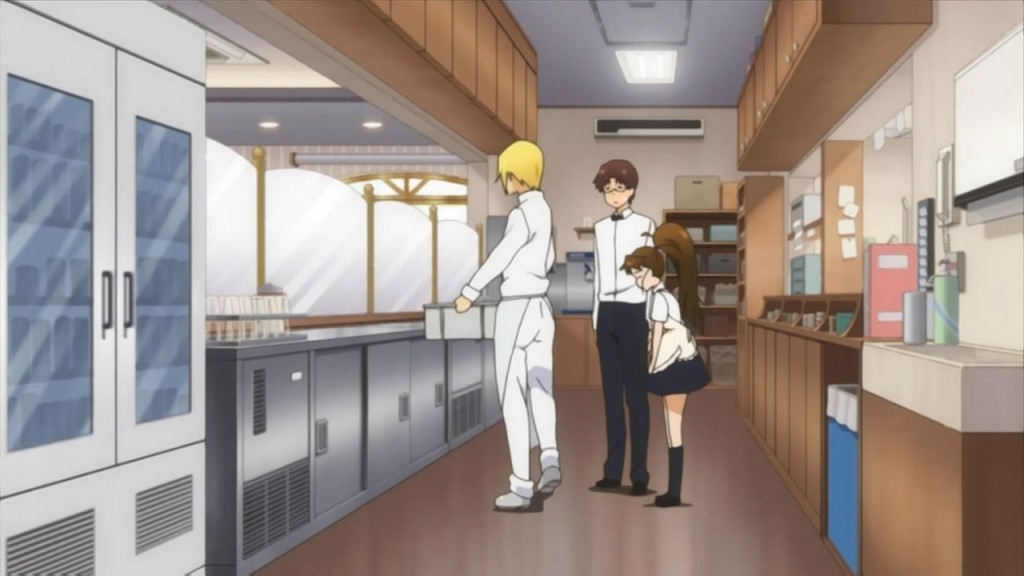 Now as a whole WAGNARIA!! doesn’t exactly have much of a plot. There is no objective in mind or task to be accomplished other than to serve the customers and “do their work.” Of course considering the series is of the slice of life genre it does not require a driven plot. Rather episodes mostly progress at a simple pace with the characters interacting with one another in the restaurant with only minor interaction with the customers. There are plot points which are followed throughout the series but these can be seen more as running gags and it actually holds the series together well  while keeping the watcher laughing all the while.

Artwork:
There is one thing that caught my eye as I began to watch WAGNARIA!! and that was the fact that the characters’ hair coloring manages to avoid the “halo” effect that is prominent in nearly every anime that is made today and is shaded impressively. Plus there are plenty of vivid colors that help keep the viewer’s attention on the characters with their great designs added into the great coloration. The backgrounds for the most part help set the fact the characters are working in a family restaurant but isn’t impressive or lackluster; simply suitable. The few moments when the anime turns away from the restaurant we see some more impressive backgrounds and design which shows that the main reason for the lack of noticeable backgrounds in the restaurant were due to setting constraints.

Audio & Subtitles:
The voice actors who are playing the characters do an impressive job of handling the voice work. The personalities of each character really shine with the voices that are matched to them, especially Soma and Sato the kitchen staff.  What is surprising is the opening sequence for the anime. The opening song “Someone Else” is extremely catchy and timed perfectly with the animation making it a great way to set the mood for the viewers. The ending song “Go To Heart Edge” is also enjoyable to listen to but not as impressive as the opening. 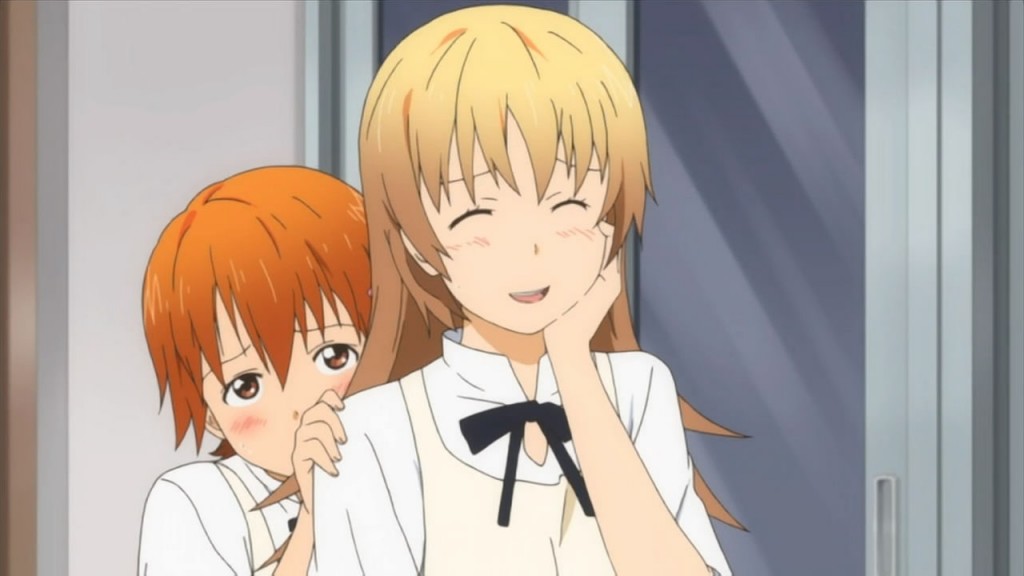 Now WAGNARIA!! uses the original Japanese dialogue which means that the whole series is subbed. Some people may be turned off by this aspect but there are those who do appreciate the original voices with subtitles. As far as the subtitles themselves they are suitable enough and I only noticed a handful of grammatical errors throughout the thirteen episode series.

Characters:
Now every anime is held together by how the characters interact with one another, but this is especially evident in the slice of life genre when there usually isn’t a plot to follow. Now the workers of Wagnaria are no slouches when it comes to having unique personality traits and each of them ends up bringing something interesting to the restaurant and to the show.

Our main character Sota Takanashi appears to be the most normal of the workers but that is only because his personality trait is less evident than the others. Takanashi has an extreme affinity for anything that is small and cute. This ranges from children, tiny animals, toys and Taneshima. Though his actual fondness for these small things is only because he wants to protect them and only happens to see Taneshima at the same level as a “water-flea.” His constant affection for tiny things appears frequently throughout the show and is the whole reason he joined Wagnaria in the first place.

Now before I mentioned that Poplar Taneshima is vertically challenged. Being a worker at a family restaurant this causes her to have more than a few problems with her height. She is often mistaken for a middle schooler, or even worse an elementary school student thanks to her small size and she often requires help around the back of the restaurant with certain tasks. Her sensitivity to her height is only made worse by Takanashi’s (or in her case Katanashi) constant reminder she is tiny and Sato’s teasing. 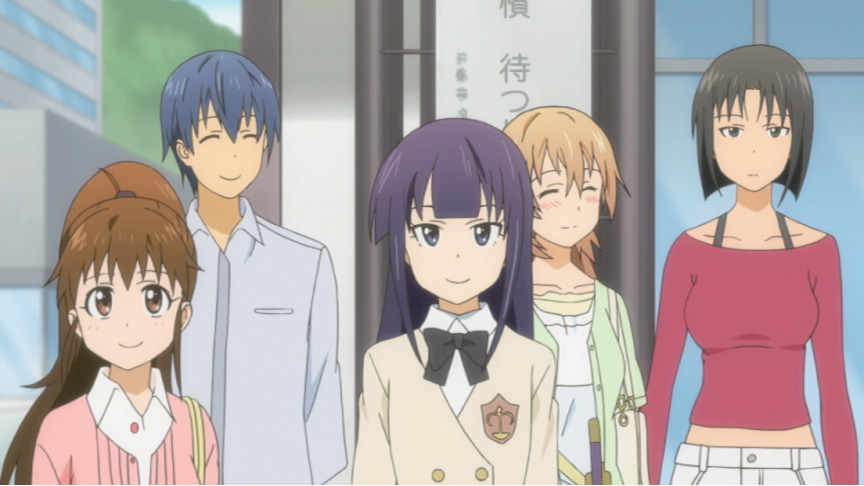 Rounding out the three characters with the most focus in the anime is Mahiru Inami. Now Inami is one of the strangest girls to work at Wagnaria, mainly because she suffers an illness. This illness is androphobia, better known as a fear of men. She is so extreme in her illness that she punches any man without hesitation which leads to her constantly pummeling Takanashi as the manager told both of them to work together to try and fix their respective problems. Inami manages to work at Wagnaria by serving only the female customers and taking out her built up frustrations on Takanashi in the back.

Now earlier I mentioned that the manager of the restaurant is extremely lazy, her name is Kyoko and does absolutely zero work around the restaurant. Instead she only eats parfaits that are made for her by Yachiyo Todoroki. Now Yachiyo has a unique trait of her own, and that is the fact that she always carries a katana strapped around her waist and is more than willing to pull it out whenever someone threatens her close bond with Kyoko. Kyoko responds in same by providing a dominating force in Wagnaria and helps keep the restaurant from coming under any trouble.

The chefs of Wagnaria are Jun Sato and Hiroomi Soma and although Sato appears to be the most calm and collected worker at Wagnaria he actually is far from it. Sato is unusually helpful in the back and often helps Taneshima when she needs help, of course that isn’t when he is teasing her about her height or making designs with her long hair. This usually only happens however when Yachiyo has finished telling him a story about the manager for certain reasons….  Soma appears to be the quiet member of the workers but there is a saying that one should always watch out for the quiet ones. Soma is extremely deceiving and often blackmails various members of the staff with his knowledge about their lives or pasts that they don’t want revealed to the rest of the staff. 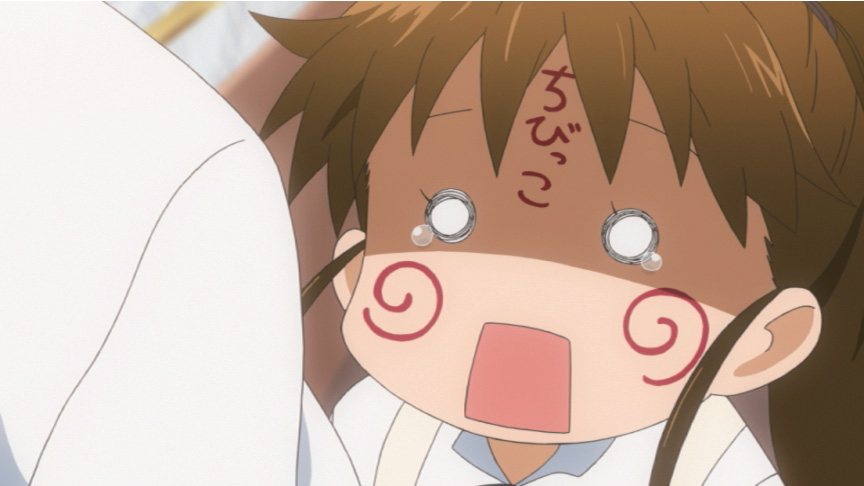 Now various other characters appear throughout the series, with Aoi Yamada helping to round out the final main cast later in the series. Yamada is a very cheerful but apparently clumsy girl whom is found by the head of the restaurant Hyogo Otoo, who is never at the restaurant because he is searching for his lost wife. Yamada has a mysterious past around her and is “suffering selective amnesia” after falling and hitting her head. Yamada appears later in the series and sees various workers at the restaurant as “perfect family members” to make up for her forgotten family.

Sota’s sisters also make an appearance occasionally and range from either a wild drunk who can’t manage to stay in a relationship, a shut-in romance author, a younger sister with a habit of twisting her elder sisters around, and a divorced lawyer. Sota’s sisters are evidently the reason for his love of small things as even his youngest sister is quickly passing him in height. Their diverse personalities create a hectic home life for Sota who tries to keep the household from imploding on itself. 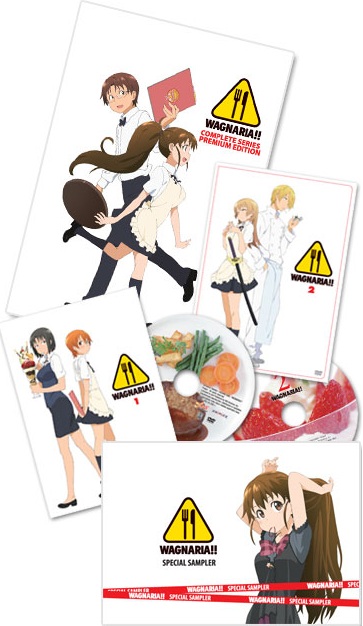 WAGNARIA!! comes inside of a hard white collectors box. As per standard with NIS A’s premium editions the box is oversized to help store the rest of the contents of the package with ease. On one side of the box we see Sota in his waiter uniform walking to the left side of the box with Taneshima in her waitress outfit walking to the right side of the box. In the top right corner is the anime’s title and yellow caution sign logo with a knife and fork inside the sign. On the flip side of the box is a large picture of Inami in her street clothes that is cute looking. Also the pictures are completely crisp and avoid of any pixilation issues which were a problem in the previous release.

Now the two DVDs come inside of slim cases with one disc containing seven episodes and the second disc containing six episodes. Also on the second disc are the clean versions of the endings, meaning no credits in the way of the animation. Unfortunately it is a disappointment that the opening was not also provided as bonus content as it is a major highlight of the series.

Now onto the best part of the premium edition, the hardcover artbook titled WAGNARIA!! Special Sample. Inside of the book are a number of different character sketches and background pictures. The highlight of the art book however are the character pictures and descriptions about their personalities, a relationship chart showing off the relationships between each character and of course a few four-frame comics that the anime is based off of. The artwork inside the book is pleasing to look at and the comics are humorous, though best read after watching the anime for full enjoyment.

Overall:
WAGNARIA!! does everything right as far as being a slice of life comedy goes, especially with a little bit of romantic comedy as well. There may not be a central plot but with characters as unique as the ones working at Wagnaria there certainly doesn’t need to be one. The humor is usually well set up and the only person I could see not enjoying the comedy is someone with a bad sense of humor. With great artwork and a cheerful opening each time WAGNARIA!! welcomes you with a smile that you will experience throughout the series.