The iTunes App store is full of word games. Word searches, word puzzles, words with friends, enemies and Siri. Then there is W.E.L.D.E.R., short for Word Examination Laboratory for Dynamic Extraction and Reassessment. Published and Ayopa and developed by Highline Games, a start-up formed by ex-Rockstar New York staff, there were high hopes being brought to the table (or desktop, rather) with this title. The game has faired pretty well on the iTunes App store, but what happens when this iOS word game leaves its App format and becomes a Mac game? 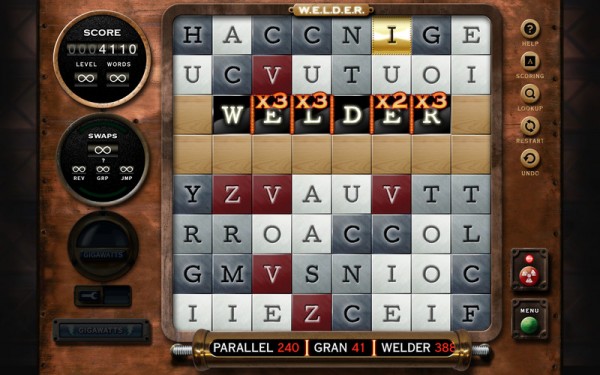 The gameplay is very simplistic. There are a bunch of metal tiles with letters on them, which need to be swapped around in order to make words comprised of four or more letters. Amongst these metal panels there are wooden ones, which can have any letter imprinted on them. Sounds simple enough, right? Well the challenging part is, you only have so many ‘swaps’ you can use. As the levels progress (there are 12 in total), you get less swaps to complete the puzzle. However, you eventually earn new swaps to change tiles in new ways. At first swaps can be done only with tiles that are next to each other. Moving a letter across the board uses up precious swaps and means that you become ever closer to finishing your game. Of course, every time you gain 250 points you get new swaps – but that isn’t such an easy task. New swaps like jump swaps, which allow tiles to be swapped across the whole board, or reverse swaps that allow a string of letters to be turned around, become helpful as you progress through the game. 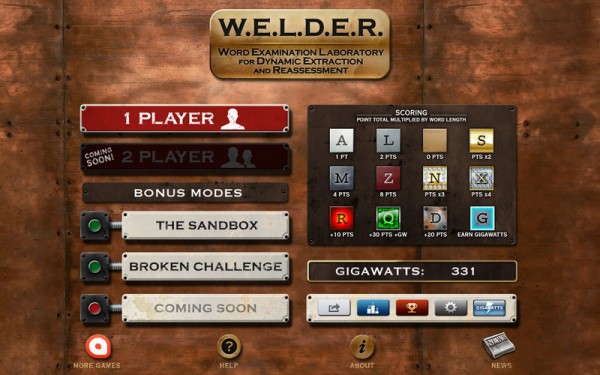 But this is all in the standard game mode. There are also two more game modes in W.E.L.D.E.R that you can unlock. Sandbox mode has unlimited swaps, and allows you to construct words uninhibited. The other type of game mode is the Broken Challenge. This features limited swaps, like normal mode. However, this time around there are a bunch of ‘broken’ tiles. Broken tiles can’t be moved, even when words are made underneath them – doing so will just cause gaps in the board making it even hard to form words. The only way to get rid of them is to construct a word around them, using that lettered tile. This provides an adequate challenge, although it can become rather taxing and tiresome very quickly.

I should also note, a nice feature of the game is being able to close the App and then come back and be where you left off. Although, I often close the game out of frustration and don’t want to come back to a game where I have one swap and no near by letters to form words. But there is always the chance to start fresh in the level you managed to reach before your game ends, which is good if you find the first few levels too easy. Overall there are a lot of features in the game. There are a huge amount of tiles to utilise for scores, numerous ways to move the tiles around the board; there are gigawatts and a whole other manner of things. In short, there is a little too much going on which doesn’t ultimately effect the challenge or mechanics of the game. As dressed up as it is, it’s still just clicking to form words – the game does have very limited appeal. 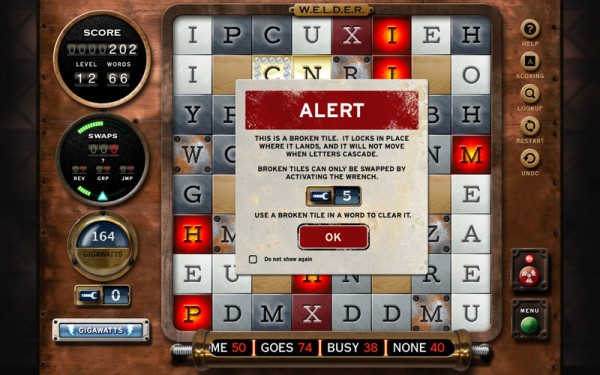 There isn’t all too much to say about the visual style of W.E.L.D.E.R. It has an industrial feel too it, which is matched by the music and sound effects, but more about that in a moment. There is very little to say about the actual board, it has different styles of tiles, some of which can look out of place given the ‘factory floor’ setting of the game. But on the plus side, the interface is well constructed. Granted, there is a lot of information that doesn’t come into play all that much – the swaps being the primary focus for attention. However, the information that is there is useful and is presented well to help the game progress. As for the audio, clicking tiles, moving tiles, and hell, just doing anything in the game results in mechanical noises. In the background there is a whirring machine-like noise that pushes the game’s theme forward. The industrial setting works, it fits the game and the constructing of words. But ultimately, it doesn’t add anything extra to the game; any other theme could fit and probably work just as well. 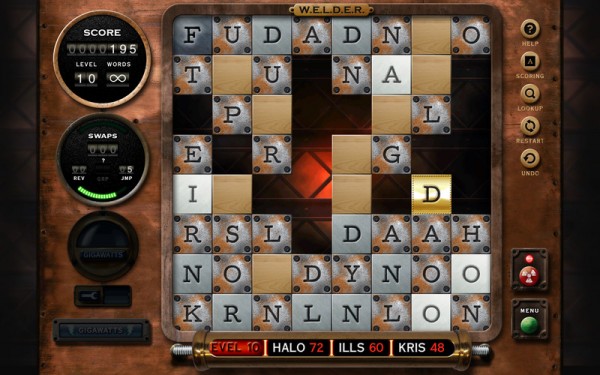 If you like word games, then this is sure to give you some sort of enjoyment. I can also see the game working well as an educational game. However, I don’t feel like W.E.L.D.E.R really cuts it as a desktop game. Despite how popular it was as an iPhone game, the act of opening and playing it on a desktop computer becomes a bit of a chore. Sure, the interface has been updated to fit with the aesthetics of a larger screen and the input of a mouse, but it just doesn’t cut it in this case. Think of W.E.L.D.E.R. as akin to those card-based games that come free with your PC – they may have provided some enjoyment when you first got your computer, but they are seldom opened these days.