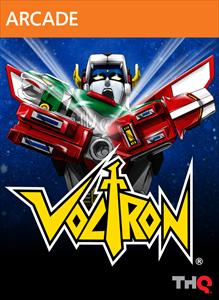 Overview
In the 1980’s, Voltron quickly became a popular anime television series. Even though the series had gained immense popularity, not many games have been developed in its honor. The developer, Behaviour Interactive, has created a duel stick shooter that incorporates different styles of gameplay. Let’s take a look and see if Voltron: Defender of the Universe lives up to the anime persona.

Story
The good planets of the universe created an alliance to protect the galaxy from evil oppressors. From this alliance one name rang throughout the galaxy – Voltron. A group of five space explorers sought the secret of the lion force to fend off the new evil from Planet Doom. Proclaimed as king, Zarkon rules his planet with force of machines. In addition to the evil ruler, a mischievous Prince Lotor and Witch Haggar aid in the king’s plans. 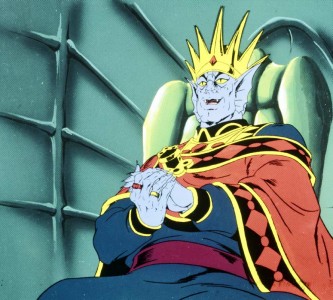 As Zarkon’s forces begin to spread, it has become the Voltron Lion Force’s duty to stop his reign. With the combined efforts of King Zarkon and Witch Haggar, they summon powerful Robeasts to destroy the lion fleet. Only by forming into Voltron will they be able to defend their universe.

Gameplay
In the character select screen, players will be able to choose their favorite/available lion to play. Each lion is given different attributes and identifiable color. However, the difference in lion attributes is hardly noticed during play. Once the character chooses a lion the game begins with a short film from the anime series.

The game style changes between three modes of play during the course of the game: Lion Mode, Space Mode, Voltron Mode. In Lion Mode, players use a duel stick shooter format that provide constant fire with the right analog and movement with the left. A tap of the right trigger will cause a lion to activate mega-thrusters and pounce in a targeted area. This melee attack can be quite useful to avoid attacks or take down flying opponents. Additionally, each lion is given their own special attack using the left trigger. During the course of each Lion Mode level, players are to complete objectives like defending a castle, protecting supplies, or defeating minions. No matter what lion you choose, the constant firing of your guns will grow tiresome and make you wonder if you have really accomplished anything. Any level can be cleared alone by strafing left to right with constant fire. 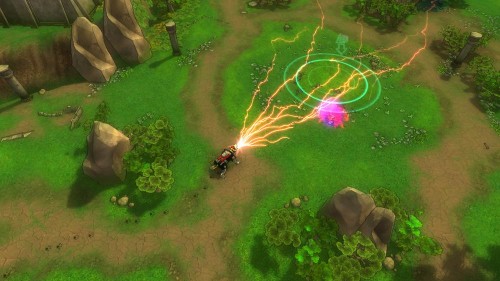 Within Lion Mode, players are given a chance to redeem themselves once their lion takes too much damage. The character is ejected out of the lion and must defend the position for 10 seconds without dying. If the player can survive 10 seconds and make it back to the lion, his/her life will be spared. Staying alive is a huge deal in multiplayer because extra lives are shared by everyone – this is a team sport!

Space Mode incorporates a scrolling environment in zero gravity space. Moving in outer space can be difficult if the screen becomes full of Zarkon’s forces. This mode mimics a combination of Geometry Wars and Asteroids but with Voltron graphics. As the Voltron Lion Force travels from planet to planet, they must dodge/shoot asteroids as well as take down attacking airships. Still with the duel stick format, the only difference is with the secondary controls. Once activated the right trigger will perform an unique somersault that avoids any contact with enemies. This becomes extremely useful when enemies begin to cloud your screen with projectiles. Space Mode was the most difficult for me to play because I would occasionally lose sight of my lion in the blending background. 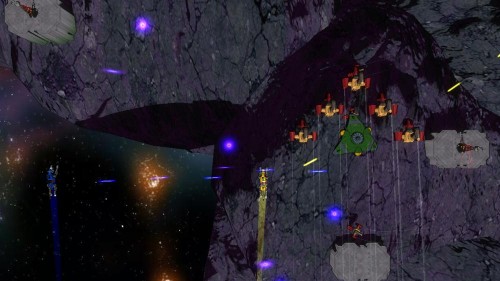 The final mode I got to experience was Voltron Mode. After breaking down a robot’s defenses in Lion Mode, up to five player conjointly form into Voltron. Shifting from a duel stick shooter to a turn based accuracy match really dampened any of the game’s greatness. If this section was changed in favor of active boss battles, I believe a lot more opinions would have been positive. To make this mode even more aggravating, you must count on your teammates to accurately time attacks when it is not your active turn. The turn based battles are slow moving and could have been made much more interesting, yet it seems necessary to involve all five players. 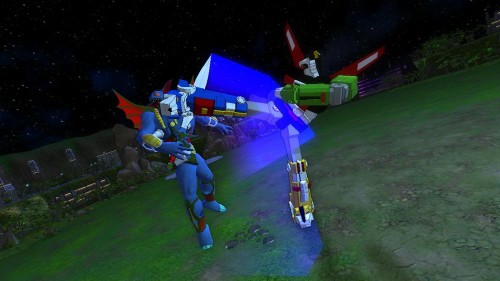 You may find yourself strafing and avoiding a lot in single player, but multiplayer offers a fast, addictive style that understands the meaning of playing with friends. Voltron: Defender of the Universe should always be played with five players. The aspect that makes Voltron unique is that a team of space explorers with different mentalities have fought together separately and as one unit. Put away your pride and fight with courage and humility with the rest of the Voltron Lion Force.

While the environments are not completely distracting, they provide enough space for an effective dual stick shooter. And there is enough space for five separate lions to roam freely! In many multiplayer shooters, players complain that they have to stick to a specific area or follow their partners around. This game offers freedom from that “player following” and allows you to take full control of your lion.

Audio/Visual
The storyline becomes enhanced by scenes from the anime series. Before each stage begins, a short film is initiated and offers the nostalgic environment that fans have loved about Voltron. Being able to watch segments of the show was a definite bonus. I almost felt the need to continue to beat each stage just so I could view the next clip. At one point, my brother-in-law came into the room and asked me what I was watching. I told him I was playing Voltron. Stunned, he looked at the screen once more and shook his head in disbelief.

Game visuals do not compare well with modern graphics. Players can definitely tell that this game was made as a downloadable title rather than on a physical disc. The robot battles take the biggest hit for having too much of a cartoon vibe. I felt that the machines did not fit well into the environment and that the turn based system prevented a stream of animations that could have made battles more appealing.

Overall
Many reviews critique Voltron on poor graphics and repetitive gameplay. I agree that the graphics aren’t as great as they should be, and the fact that the gameplay becomes a rigorous grind against robots. However, the greatness that is Voltron is experienced within the multiplayer. Not only does the game move faster but also gains a feeling of teamwork that is the essence of the Voltron Lion Force. What is Voltron but the make-up of five space explorers? With the single player lacking the essence of a team and game lacking Voltron playability, Voltron does not sit well with a lot of viewers. For those that want to experience an enjoyable multiplayer experience and the nostalgia of Voltron film shorts, this is still a game that can be enjoyed.

Voltron will be right back after these messages… for