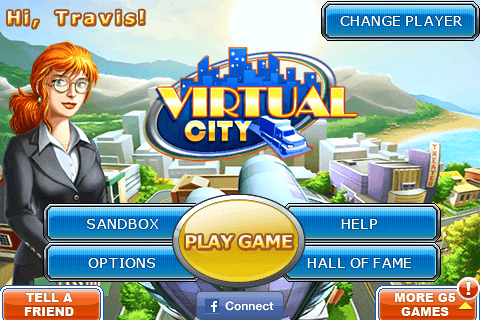 Graphics:
Everything you see in VirtualCity is gorgeously designed and has an overall cuteness to its appeal. Many things are drawn true to life, but the coloration and the overall appearance it ends up providing is very cheery, even the menu screens themselves. Though occasionally buildings will appear very similar to one another and when the player first starts out, a labeling of the building names would be appreciated beyond the initial tutorial.

However being the fact that this is on the iPhone’s screen, the graphics can lose detail and start to distort slightly when zoomed out far enough away. Plus this also makes selecting various vehicles or buildings difficult due to misinterpreted finger taps. Combine this with the fact that the game does not have an option to zoom out far enough to view your entire city in one screen forces the player to have to jump from place to place to see what is going on inside of their city.

Gameplay:
As you may expect from the title of the game, you are in control of a miniature city and have to complete various missions for each level. There are a total of 50 different levels you can advance through and play, though the Sandbox mode that you will see above is not incorporated into the game yet. This mode would definitely be an amazing edition to the game, because the way that the missions are set up make some of the areas feel too short. Good thing there are plenty of different missions and various things to do within your city.

As you begin you will play through the first few levels which will train you in everything that you will need to know, whether it is directing truck routes, upgrading buildings and your vehicles, or simply making sure that your populace isn’t dieing of disease you will be given a crash course in managing each city you will work with which is a very helpful. A game that would be very confusing to first time players is transformed into an experience that anyone can jump into and play thanks to the tutorial levels. 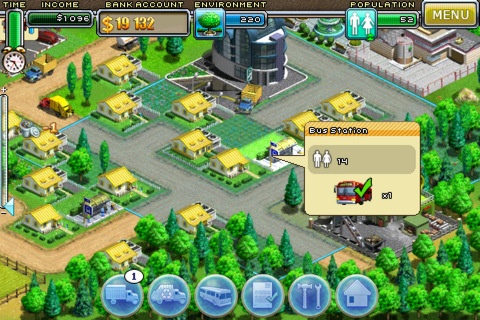 Everything that you do is handled through the tapping of your fingers on the screen to select the building you wish to use, or the truck you want to direct. However due to some touch recognition issues the game will occasionally think that you are selecting something entirely different which can be annoying at times but is not a game breaking problem.

As you advance through the game and encounter more difficult missions, VirtualCity may at times begin to feel overwhelming but this is usually easily handled through just a few swift taps of the screen, as long as the recognition stays fine. VirtualCity has very few excess problems that hinder your enjoyment of running a city. There are many features that set it apart from other city simulation games you have played, but more than anything else is the game’s easy to play approach.

Overall:
When you pick up VirtualCity for the first time the game welcomes you in with wide open arms by showing you an in depth tutorial and the way it is presented. There are times that you will literally not be able to put the game down until your mission is complete, and even then will advance to the next mission regardless of whether you have things to do elsewhere. The only downside is that the game suffers from finger recognition and that the Sandbox mode is not quite in the game yet, though this has been promised for a future update so be ready!.