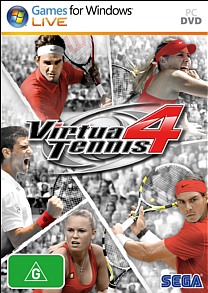 Virtua Tennis 4 does an amazing job of making a sport, that many would argue as boring, into a fun and accessible package. Over the course of the game, players will be able to compete in tournaments, verse living tennis legends and build their own character as they battle through the ranks to become number one.

Virtua Tennis 4 plays as you would expect for a Tennis game. You have one team of tennis players on one side of a net, with another team on the otherside. Teams generally consist of one or two members. Player one, in any single player event, will always get the first serve. Each player on the tennis court will try and hit a ball into the opposing teams field in order to win.

Now, this seems like it would be an easy thing to do, but, some of your opponents throughout the game can be a little tricky with their handling of the ball. I found that thinking of a strategy before going into a match is a must if you intend to win on more than luck. 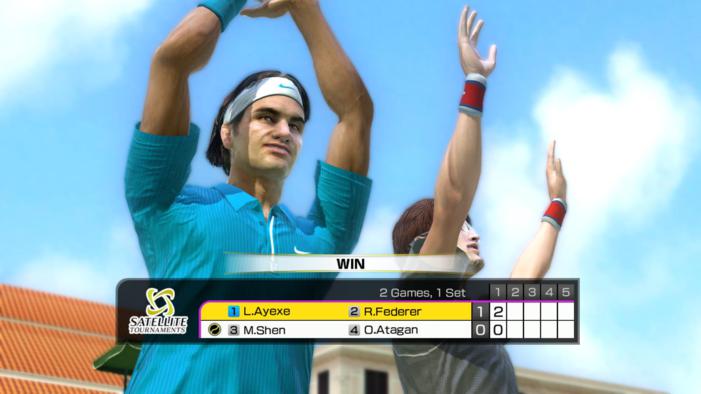 The game has many gameplay modes such as: World Tour, Arcade,  Exhibition, Practice, Party, Online and My Club. Each gameplay mode is it’s own thing, but they all revolve around tennis in some way.

World Tour mode is a kind of Board Game that follows your journey from a newcomer to the tennis sport to your (hopeful) triumph over the tennis world. It is possible to make it to the end of this gametype without actually winning. I quite liked that aspect of the game, as it keeps you on your toes as well as allowing you to feel the defeat that so many actual tennis players feel. In World Tour mode, you must become qualified in order to compete in the larger events. This means that you will need to attend as many smaller events as you possibly can in order to earn stars. If you play particularly bad throughout the game, you will miss a lot of the minor tournaments and have to compete in the major tournaments from the very bottom. The World Tour mode is also a gametype that has you managing your own condition. Condition is basically your ability to play well within a match. As you progress through the board, your condition will worsen so you must train regularly to build your overall condition, as well as get plenty of rest in order to keep your condition at its best. The condition feature is one that I did not like about the game. I found that condition loss was too prevalent in major tournaments and that by the time you were in the finals you would have no condition left and would be basically going into the match on a broken ankle.

Arcade mode is pretty much as it sounds, you play through a series of tournaments in order to win. In Arcade mode, you can choose from a wide array of living tennis legends, or as your own custom tennis star that you have been using in World Tour mode.  This gametype can also be completed with other players, which is a nice addition to the gametype. 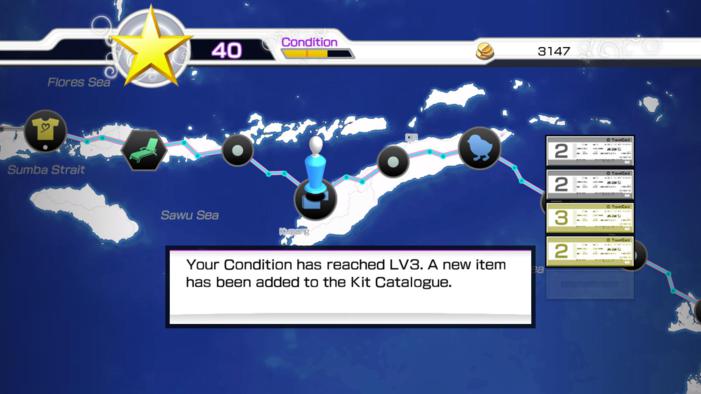 Party mode is a group of minigames designed to be played with multiple players playing the game. The minigames seem to be centered around the training games found in the World Tour mode of the game. I actually rather enjoyed these minigames as a whole and as individual units. One minigame has you running around hatching chicken eggs while avoiding cannonballs, while another will have you playing hot potato with a bomb. The minigames are incredibly fun and offer some quick enjoyment solo, or some competitive fun in a group.

Exhibition matches are fully customisable games of tennis. In this mode you do not have to worry about completing tournaments or doing minigames, it’s just straight-up tennis. Select the gamemode, mess with the options, decide how many players are going to be in the match, select characters and then play some tennis.

In online mode, you verse other players online. What I particularly liked about about online mode is that the game will match you up against a computer controlled opponent until a challenger is found. This means that players will not be left on a waiting screen for an opponent and are also able to practice before a match.

Throughout the game players collect coins that can be used to enhance their characters play-styles and appearance. These are purchased and modified in the My Club area of the menu. There are many modifications to choose from, from apparel to different strikes. I absolutely love character customisation in this game, and it’s pretty in-depth for a game that you would not expect to even have this feature.

Okay, now we can actually talk about the important aspects of the gameplay, like the controls. Unless it is absolutely your last option, do not use the default keyboard control scheme. I recommend playing this game with an Xbox360 controller or a similar high-quality gamepad. The keyboard does not feel right at all, and I actually performed worse with the device than if I was using a controller. Of course, individual players have their own preferred playing style, I myself prefer KB/M controls most of the time, but in this case, the controller felt a lot more natural and easier to pick up on. 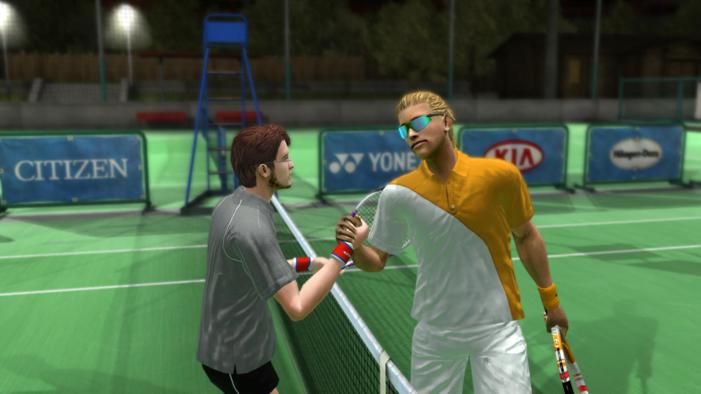 That isn’t to say that the controls for this game are perfect using a controller. I frequently found myself hitting the power-strike button only to find my dude was using a normal strike. I have no idea if this is expected behaviour, but, it was a little frustrating.

Other gameplay mechanics that I liked is this one where you get this guage you fill as the tennis match goes on. When you fill it, you’re able to do a kind of special strike, which may assist you in your match and potentially win it for you. Having strikes like these are a great implementation and keep matches interesting, especially if you’ve messed with the match options and you’re playing for a really long time.

Virtua Tennis 4 is a visual delight, though, it is quite evident that it was developed with the graphical prowess of consoles in mind. I wouldn’t say that the graphical quality hurts the PC version of the game any, and it does keep the entry level for customers quite low, with players on older hardware able to play this game. Not only that, the game runs very fluidly at 60 frames per second (with the exception of some parts of the game, where it has noticibly been cut in half for what appears to be no technical reason), which keeps the flow of tennis very smooth. Like water. 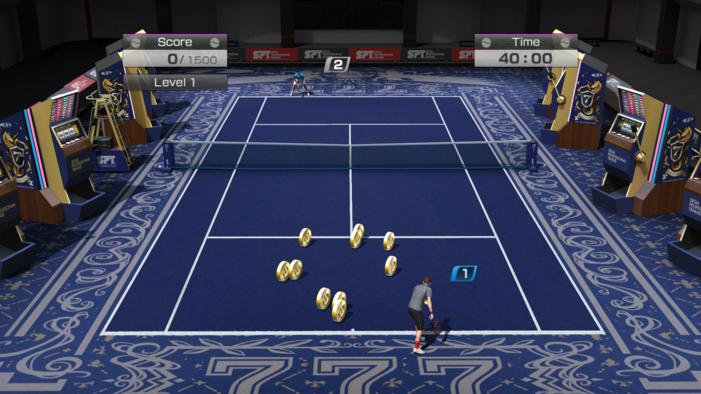 One thing that I disliked in this game was that some characters in the World Tour mode have 3D images of themselves, while others have 2D cutouts. I’m not a tennis enthusiast, so I don’t know if the rendered characters are original players made for the game, or are actual tennis stars, and having the two different displays adds a certain level of confusion as to whether or not these are representations of actual players or not.

Obviously, Virtua Tennis 4 was developed by SEGA and as such carries that kind of SEGA feel across its interface. It’s kind of hard to describe, but it is very obviously done by SEGA and it certainly feels that way. It’s an incredibly hard thing to describe, you’ll have to see it or experience it for yourself, but you’ll immediately know what I mean.

Virtua Tennis 4 has an amazing soundtrack that no doubt adds to the overall fun experience presented in this package. The soundtrack is a techno/electronic soundtrack, but it isn’t the heavy stuff that you’d expect to hear at raves. It fits the game quite well and I absolutely loved it. 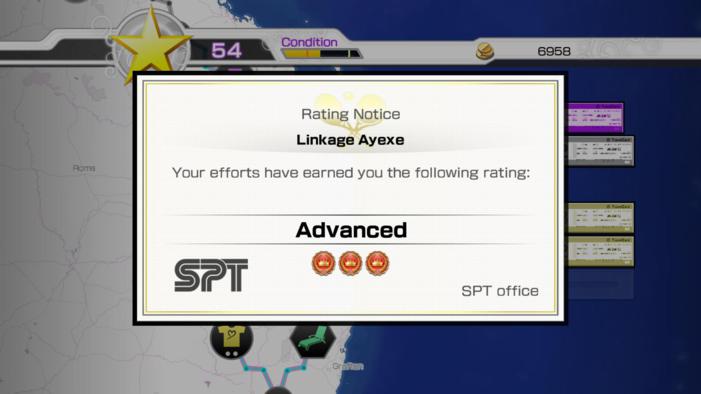 The sound of a Tennis ball hitting a racket may not seem to be something worth talking about, but I actually found the effect to be pretty well done. I mean, in a tennis game, hearing that one sound over and over again could drive some people mad, but it didn’t bother me at all and I don’t think anyone will really complain about it or really notice it. It’s one of those things that if it wasn’t there, you’d immediately be able to tell that something was off. As with the tennis ball, all the sound effects in this game are amazingly well done and the sound team should be commended for their efforts.

Virtua Tennis 4 doesn’t feature too much of a story outside of the World Tour mode, and even that is pretty lite. You’re a tennis player and you have to work your way up to become the grand champion, that’s about it. 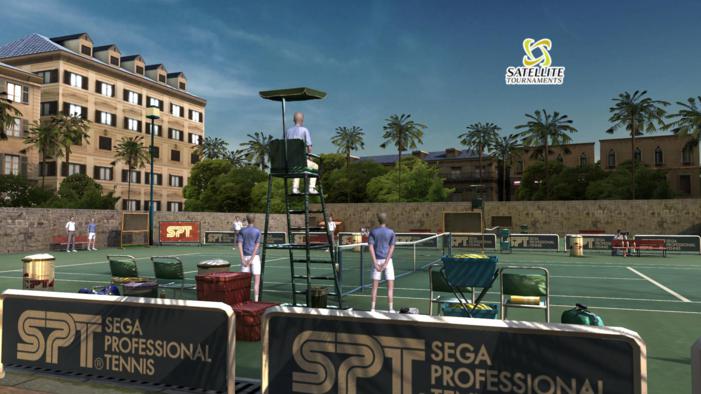 Along the road to becoming champion you’ll meet other tennis legends and some will even join your team as a doubles partner. As doubles partners, some of them are more useful than others, so make sure you choose a partner that compliments your own playing style for maximum efficiency.

Virtua Tennis 4 is an amazigly fun tennis game. I went into this game expecting it to be as boring as the sport is to spectate, but I was incredibly wrong. I’m absolutely hooked on this title and will probably revisit it later on. Aside from the issues that I have pointed out, the game is an amazing package that needs to be played by, not only tennis enthusiasts, but gamers everywhere. Be sure to pick this title up, if not on PC, then on a console.