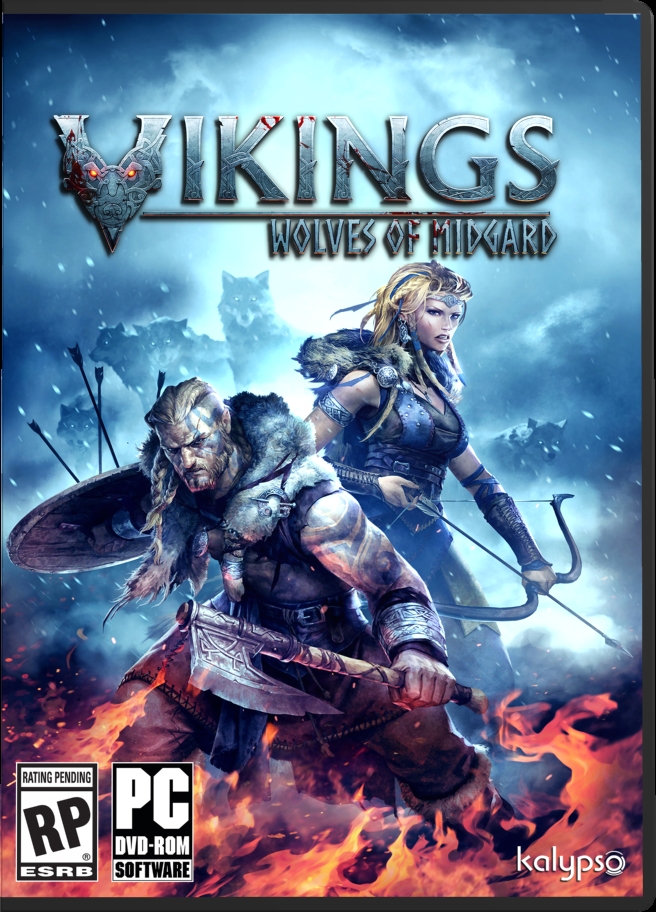 Vikings: Wolves of Midgard is an action RPG inspired by Norse mythology. Players take on the role of the chief of the Ulfung clan, a band of misfits and outcasts who lead the charge to stop the war between the Jotan and the Gods of Asgard. Blessed by their patron god, gamers will slay hordes of creatures from Norse lore, conquer the mortal foes of the Ulfung, and cement their legacy as the most feared Viking warrior. 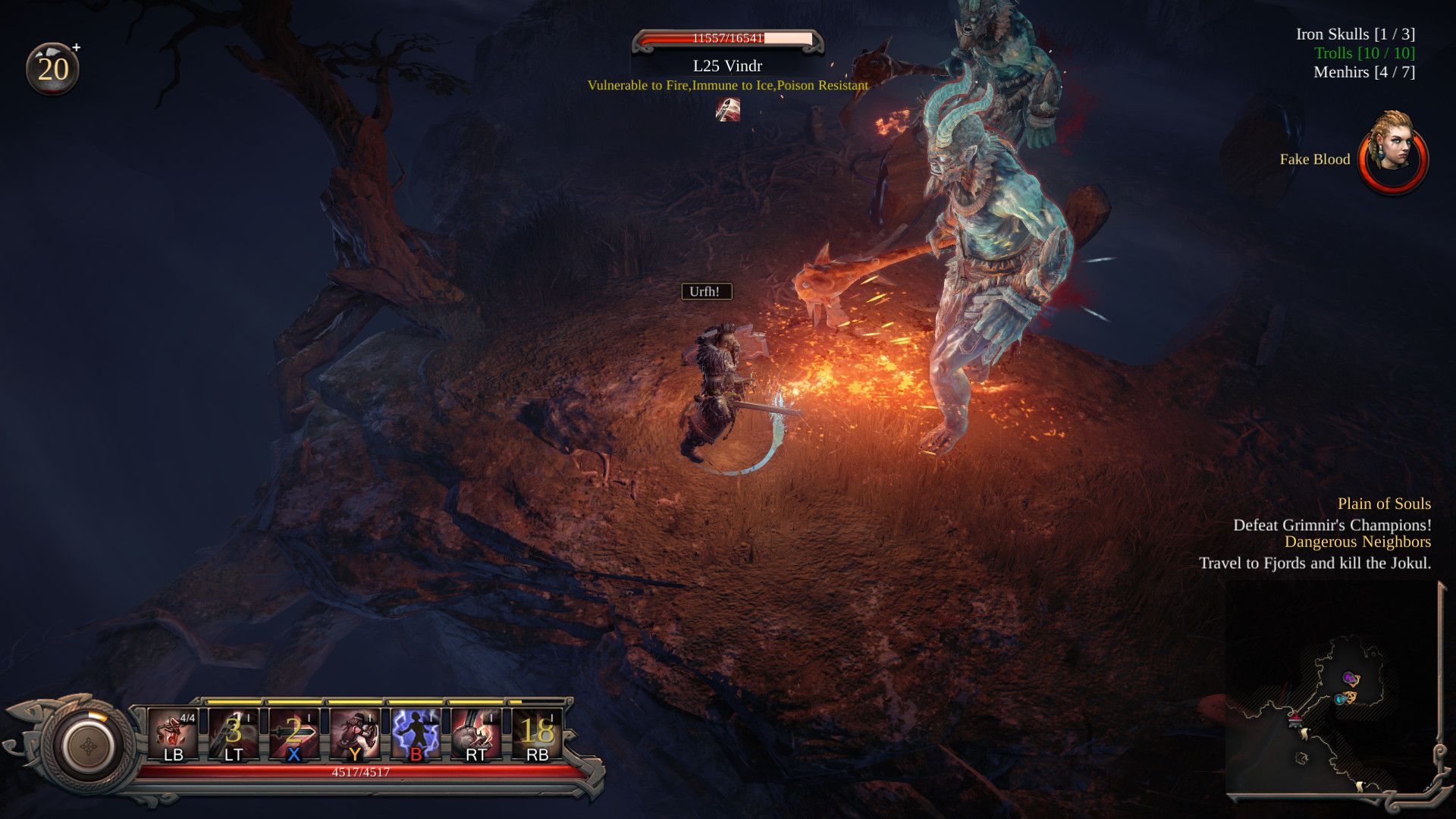 Vikings: Wolves of Midgard’s story is rather weak. While the overall idea for the plot has good potential, the execution just falls flat. A large part of the problem is that the writing lacks direction. The overall plot is presented in a very serious tone but the dialogue is often a lame attempt at being funny, corny to the point of cringe-worthy, or just plain lazy. The main character’s lines makes them unlikable, as most lines make them out to be a blood thirsty brute who answers almost everything with awful one liners. There are a few moments where the game is genuinely funny, but these moments are few and far between. The disjointed dialogue feels like different writers handled the script writing and at no time spoke to each other or that management decided to demand serious changes to the script mid-way. The game feels like wasted potential as the setting has plenty of content to explore and there are characters like Helga who would be well served by actual character development.

Vikings: Wolves of Midgard is a standard action RPG with a few twists. Character creation consists of the normal aesthetic choices, but instead of choosing a class, players pick a deity to initially worship. The choice in deity will dictate the player’s weapon specialty: two handed, dual wielded one-hander, one-hander and shield, bow, or staff. Players’ rage ability is based on the weapon, while remaining abilities are purchased from the skill tree. When players kill an enemy, there is a chance it will drop blood. Collected blood immediately restores a little health and is later spent at an altar to the gods to level up. Each level gained awards the character with two points to spend on the skill tree and a point that can increase one of five stats. The skill system leaves little room for creating builds. Each tree is rather linear as each level unlocks only one or two skills. There is no incentive to experiment with dual class builds as most of the time players will lose out on important stats with little gain in return. It leaves the game with a rather bland and overly simple progression system. 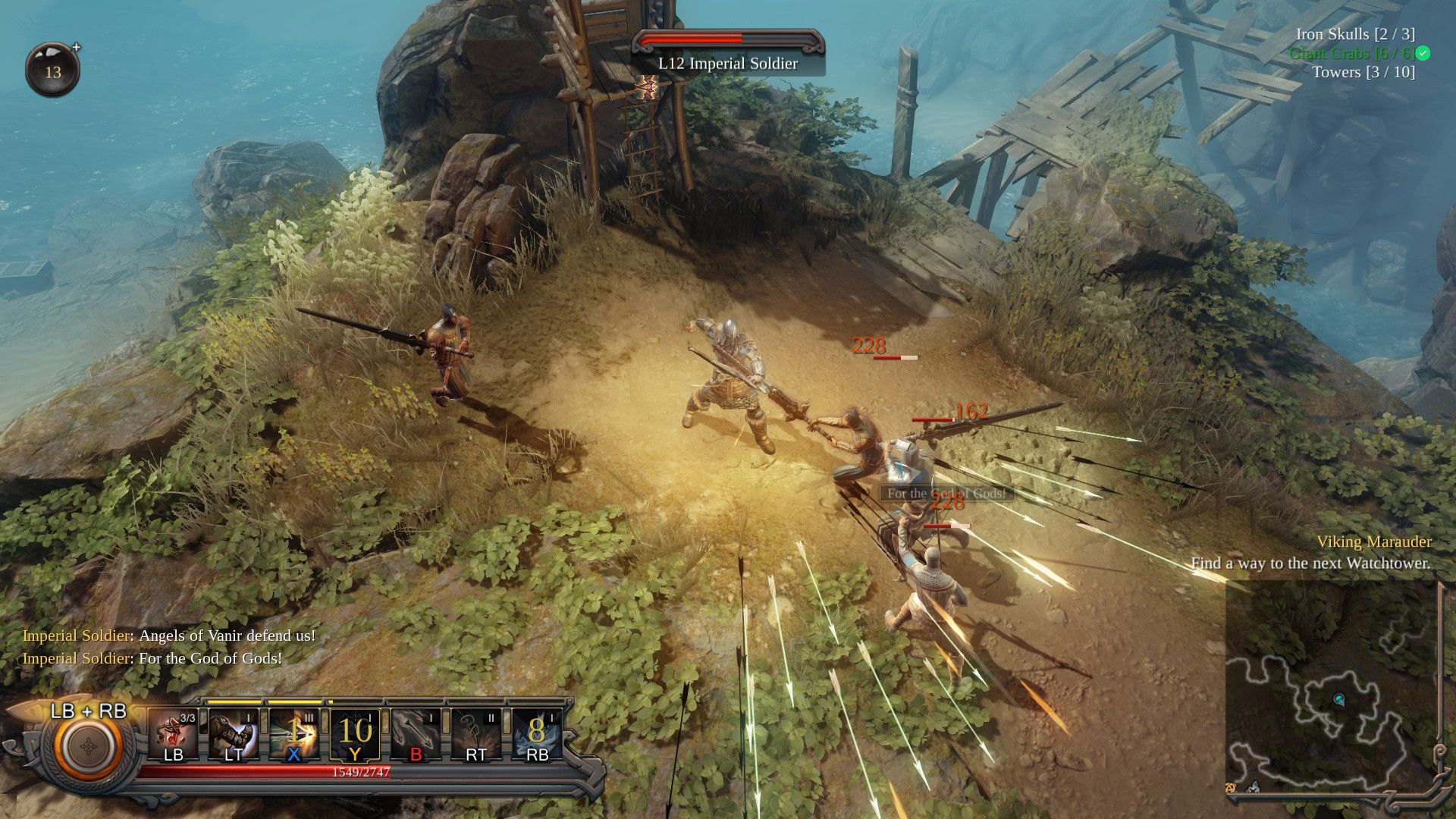 I like the combat system in Vikings: Wolves of Midgard. It mixes traditional isometric action RPG combat with mechanics found in modern action games. Stamina fuels both skills and the all-important roll function. Mobility is well rewarded in the game as strikes from behind are guaranteed critical hits and dodging prevents quite a bit of damage in a game where heals are rather limited. Having to choose between a quick burst of speed or dealing a boat load of damage adds a nice layer of complexity to combat. The game also uses a combo system that will be familiar to Diablo 3 players that reward people with extra blood for executing multi-kills and stringing together long hit chains.

The game’s biggest twist to the action RPG genre is the harsh environments. Many levels have some sort of elemental based hazard that players must contend with. Spend too long in a hazard zone and the player will begin taking damage until they can return to a safe area. Stacking elemental protection can extend the length of time a player can spend in a hazardous area, but eventually the player will need to seek cover. I like the idea as these levels become a constant decision between choosing to fight or retreating to a safer area. The cold levels get an extra wrinkle as light armour protects against cold at the cost of armour points, putting melee characters in the difficult position of figuring out how much long term survivability they can sacrifice for short term survivability. 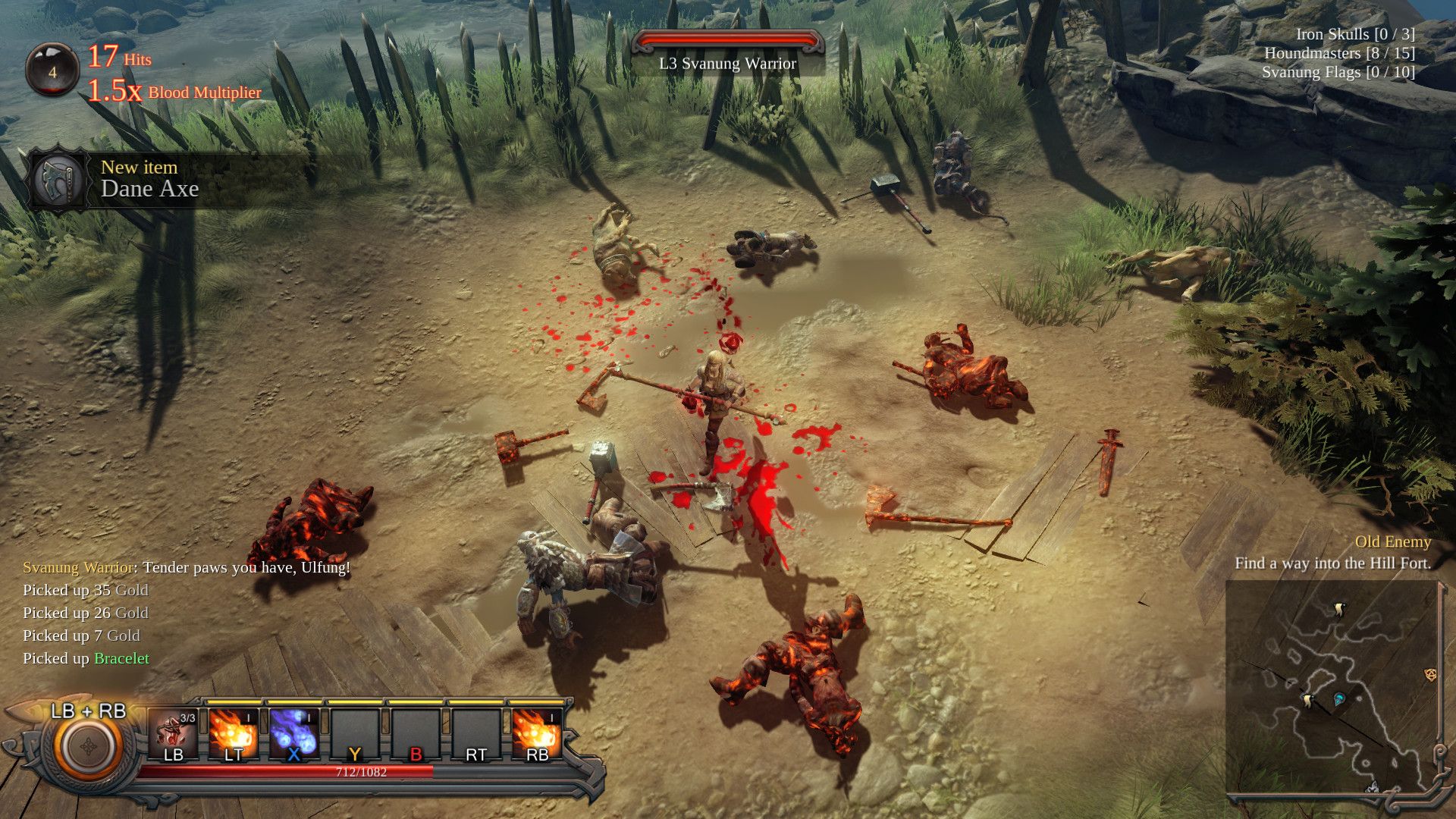 The biggest issue with Vikings: Wolves of Midgard is its subpar controls. The mouse tends to latch onto destroyable items from quite a distance away, making it difficult to navigate with the copious amounts of destroyable objects littered around the maps. Targeting long range AOE abilities with a circular area of effect is just as inconsistent as sometimes the ability would target at the mouse cursor and sometimes right in front of the character. The game generally feels like it was designed for a controller first as movement is much smoother and the game lacks tooltips outside of menus. Another major issue that is not restricted to mouse and keyboard is the many corners that the player could get stuck in. The vendor menus also seem to be lacking some quality of life features like sell all collectibles or a buy back function. 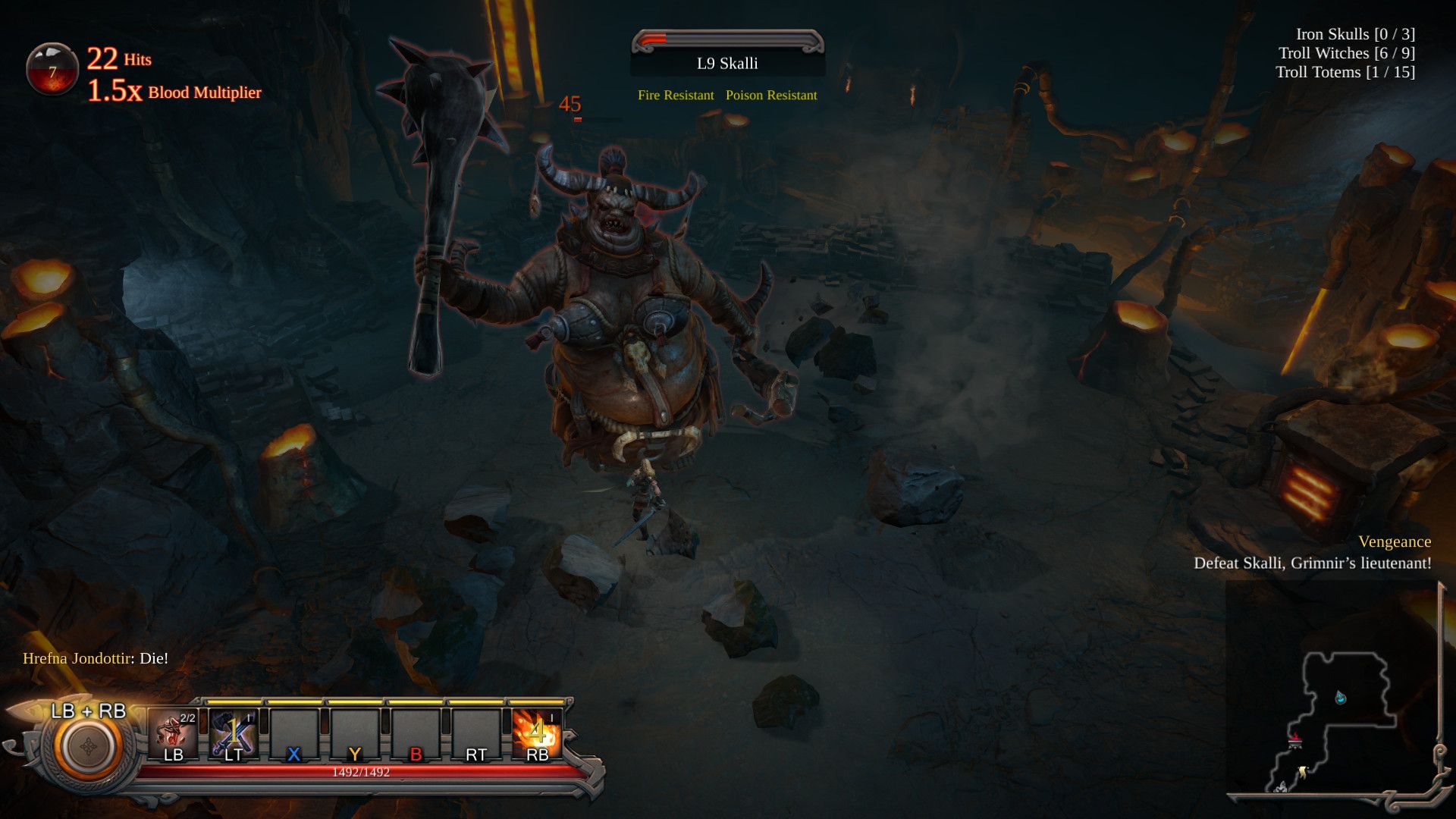 Vikings: Wolves of Midgard has rather average graphics. The art style channels a dark look that is popular with many games in the genre. The textures and models look good; however, the animations feel a little unnatural and clunky.

The audio experience is generally quite good. The soundtrack starts with a Norse style that fits the experience of being a Viking warrior slaughtering hundreds of thousands of enemies perfectly and mixes in some more modern touches at times. I would have preferred if the soundtrack was expanded by three or four tracks to give the game a little more variety. The sound effects are enjoyable. The voice acting threw me for a bit of a loop. The acting is quite good, and the actors make the best out of a lousy script. I just don’t understand the director’s decision to have the player character speak with a Scandinavian accent while the rest of the cast speaks with a British one. I understand a British accent is standard code in English language media for “historical,” but consistency is key. 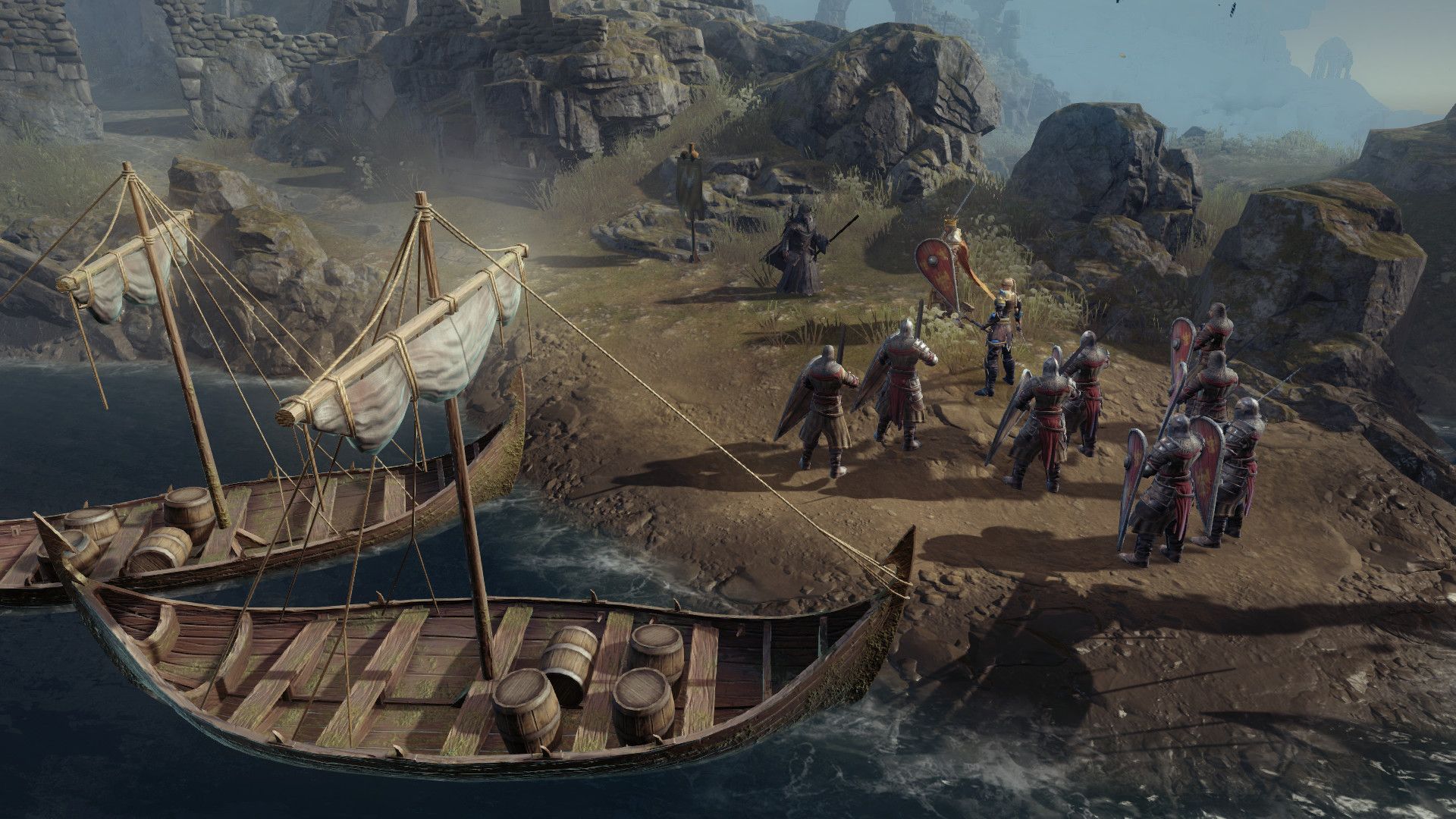 Vikings: Wolves of Midgard tries hard to distinguish itself from the hordes of other action RPGs. The elemental exposure system and the modern style combat system is a nice, small twist on the formula. Unfortunately, the game is hampered by iffy PC controls and a boring skill system. When mixed with the poorly written script and middling audio/visual presentation, I can only recommend the game to the most hardcore action RPG addicts looking for a new game on PC and those stuck without really good options on consoles.

A slight twist on the standard action RPG that is hampered by poor controls and a boring skill system.
6