There are not many RPGs that can satisfy my need to snoop through (mostly) abandoned locations and loot whatever I can find. Vaporum gives me one gigantic location with a lot of secret areas, lockers and containers to pillage from. Killing many enemies along the way and trying to stay alive is only a bonus.

Vaporum puts us into a place of unnamed castaway waking himself near a grim, gigantic tower. Still, it seems far more welcoming than the ocean we’re in. We set to explore its interior and soon enough we find one of the three available exosuits that we can hop in. Now it’s on us to uncover the rest of the story by exploring the tower, moving up and listening to occasional audio logs we find on our journey. Despite playing as one character during the game, we’ll hardly feel alone since our protagonist has a habit of narrating as we explore. 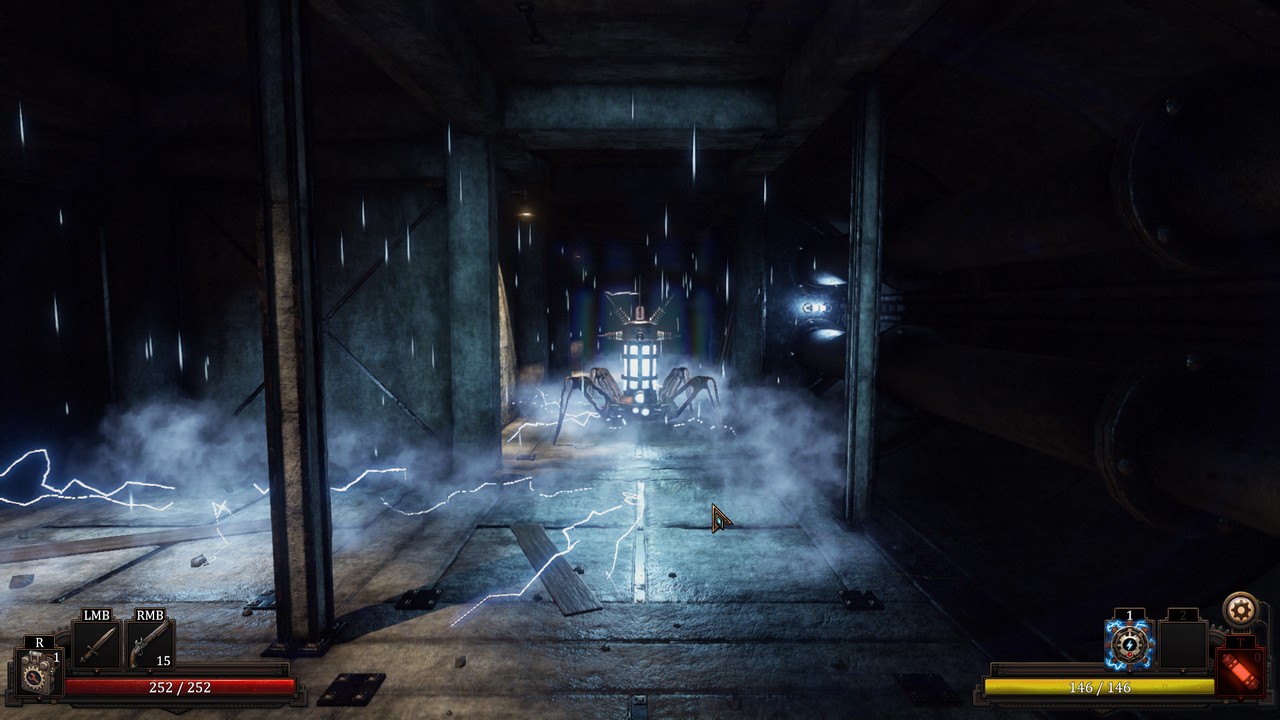 As we put on the exosuit and step deeper into the tower, we find out that we’re not exactly alone. The tower is a home to many enemies and traps. Enemies range from mechanical spiders & drones to mysterious humanoids and there is always a danger of falling into a pit if you’re not careful where you step on. To not make it so simple as going from one room to another, sometimes there are doors we need to open by finding a specific key or solve a puzzle. Regarding enemies, there are plenty of ways how to dispatch them. Our arsenal (that we build up from looting) ranges from melee weapons to guns and later on, we even get access to certain gadgets that we can equip on our exosuit. Some provide us useful defensive buffs while others can unleash devastating area effects on multiple enemies, which saved my life on more than one occasion. As for the weapons, there certainly is a lot to choose from. Blades, blunt weapons, pistols, two-handed rifles…..there is always something new to try on enemies and see which one brings them down easily. There’s no such thing as winning combination that you can set up and just steamroll through the game so a lot of times you’ll switch from various sets to deal with different enemy types. As you defeat them, they’ll drop a substance called “fumium”, which is just a fancy form of experience points. Getting a lot of fumium enables you to level up your exosuit and assign points to better weapon usage and defense. 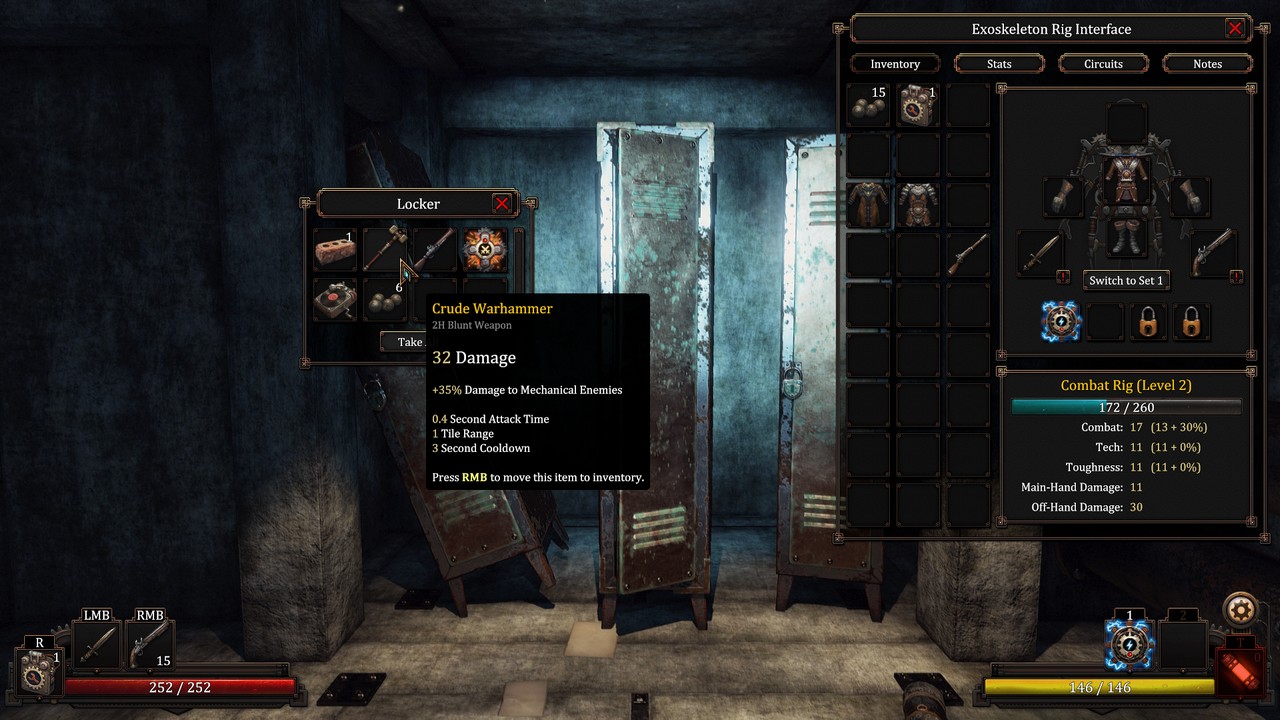 Having a game in a steampunk setting with mechanical enemies was more than enough for me to start reminiscing about first Bioshock as I explored the tower. Nevertheless, Vaporum’s design and art contain a lot of its own identity. For a grid-based dungeon crawler, it manages to escape from repetitive level design and monotonous locations. There is a map that you can summon at any time but I rarely had any need for it since the levels and paths are easy to memorize. I never had a moment to think “hm, this room looks kinda the same as the one from 10 minutes ago, have I been here already?” 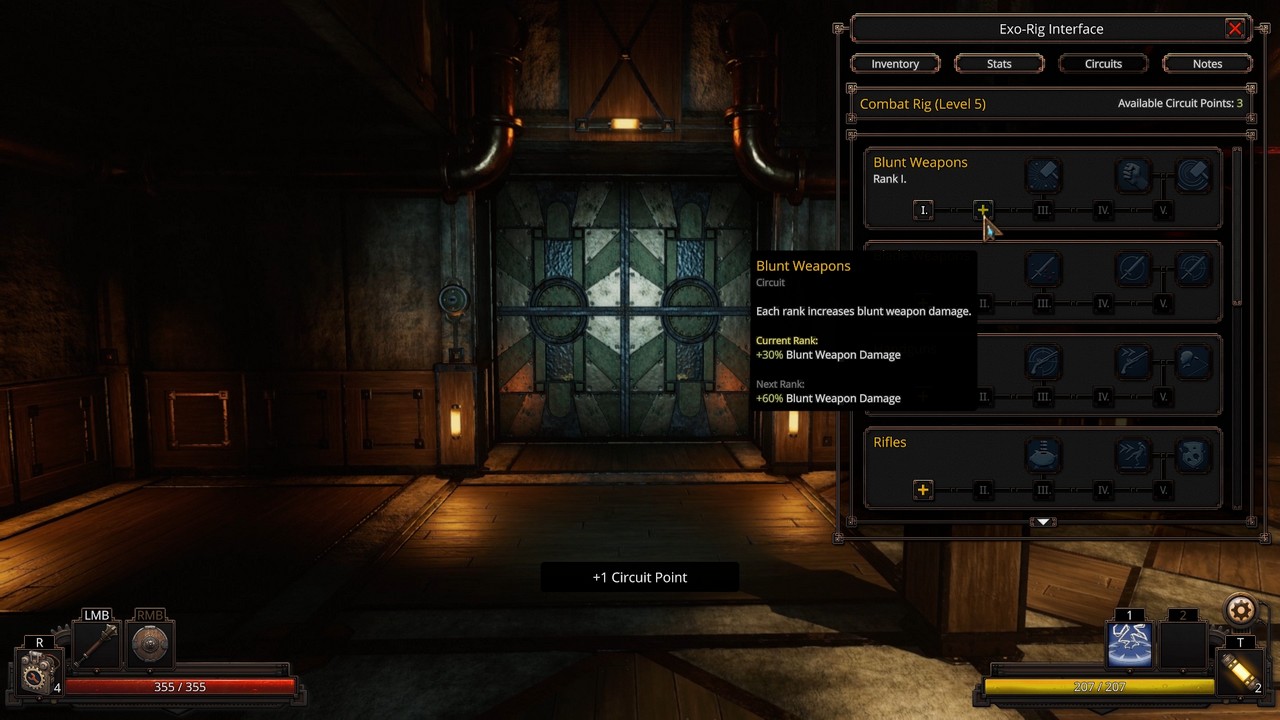 Considering Vaporum hits all the good spots so far, I was slightly disappointed that I couldn’t find anything to say about the music. There’s hardly any of it as you explore but as I mentioned above, at least you’re not alone with the main character often narrating. There are some ambient sounds coming from broken pipes, electricity buzzing and they do a nice job of spicing up the atmosphere. There is an excellent theme on the main menu of the game so it makes me wonder why something similar wasn’t included at least during intense battles. On the bring side, the ambient audio does a superb job, especially at making me feel nervous at some points and culminating in self-inflicted jump scares. In 90% of times, there really was nothing behind my back (and in the room I just cleared) but it’s always something you realize far too late. 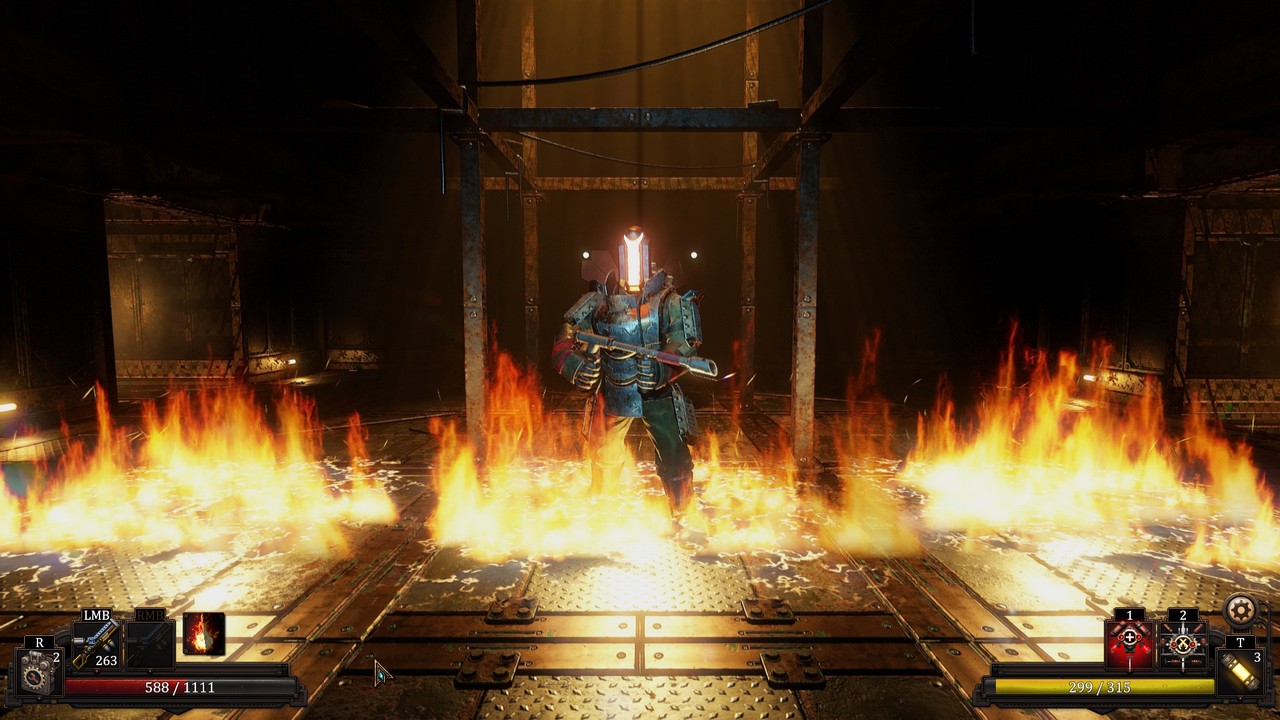 Vaporum is a tricky piece of work. On the surface, it doesn’t show anything to lure you in instantly. However, as you continue to play more, you catch that common virus of “just one more room to explore and loot”.  Combat manages to be surprisingly intense, especially at later stages where you get to use a combination of gadgets along with standard attacks. It is a game that doesn’t try hard to pitch itself to you since the atmosphere and addictive gameplay speaks for itself. A lot of the gameplay elements click perfectly resulting in you spending hours exploring every nook and cranny it than you intended. Not that it’s a bad thing.

A surprisingly addictive dungeon crawler that will keep you entertained for many hours.
8