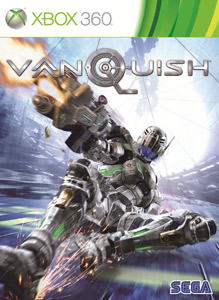 Story
The game takes place on an orbital space station called Providence. The Military have been dispatched to this station in order to get rid of a Russian extremist group known as the Order of the Russian Star. The station uses microwave energy to basically boil all water and the extremists have turned it onto San Francisco, instantly boiling all the water that is present (including the 70% found in the every human body nearby). It is up to the military to stop the extremist group before they do more harm. You play as a DARPA operative by the name of Sam Gideon. He is tagging along for two reasons: to test out the new ARS battle suit in the field, and to also save Professor Candide who is being held captive by the extremists. 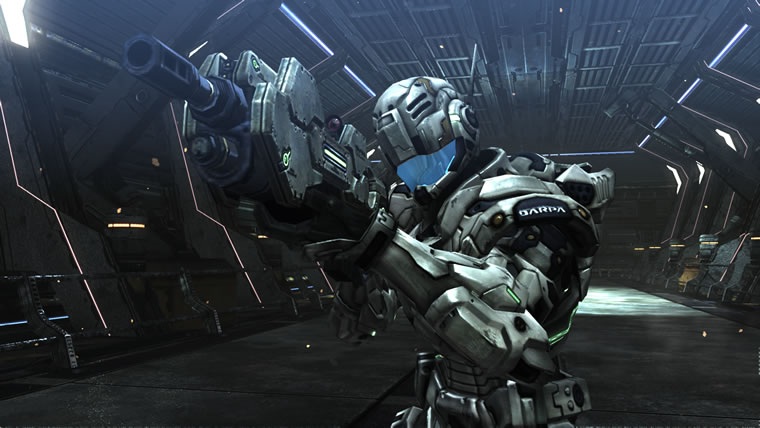 Gameplay
You can pretty much consider this game a 3D bullet hell game with third person shooter aspect thrown in just for fun. The entire game screams insane, and tons of missiles flying everywhere creates and adrenaline pumping experience. It isn’t only missiles either, debris and scenery will break all the time and you have to adjust your gameplay style to accommodate. The underlining gameplay includes: dash, get behind cover, focus, dash some more, and hide behind cover some more. I forgot to mention “shoot” didn’t I? Yeah, you’ll have to do a lot of shooting as well. A LOT!!

The screen literally fills up with missiles at every possible moment. Every enemy is trying to kill you and there are a lot of enemies. Not only missiles, but also bullets, debris, scenery, and more are coming at you at all times. The game is literally a 3D bullet hell and these are the bullets you need to avoid. Not only that, but you also have to shoot back at the people shooting the bullets at you. Luckily you have a few tricks up your sleeve that you can utilize in order to gain the upper hand. Since you are equipped with the ARS battle suit you have the ability to dash around really fast. This helps maneuver quickly while so many bullets are flying. There is also the ability to focus, which allows you to slow down everything that is happening around you and get better accuracy and also the ability to dodge bullets easier.

There are neat little extras in the game as well. There is a slight powerup system in place that lets you upgrade your guns. These upgrades can either be acquired by picking up an upgrade or by picking up the same gun 3 times while you are full ammo. These upgrades come in handy, but sadly you lose the upgrade if you die a lot. On the harder settings, your guns never get that strong because you die a lot and this in turn makes the game harder. It basically beats you down while you are already down on the ground. An arcade style scoring system is also within the game. This scoring system was nice to see how I did, but eventually I just skipped over it. Some people who go for leaderboard scores will like this but everyone else will look over it like a pointless gimmick. Finally there is the ability to smoke (we in no way condone smoking, but this is actually pretty nifty). During the cutscenes, the main character is a pretty hefty smoker. The developers decided to let the player themselves take a smoke break at a press of a button. Since the robots use heat to detect enemies smoking a cigarette while behind cover and then tossing it aside draws the enemy fire while you jump out and take them all out.

Challenges are also within the game and are unlocked by beating certain levels. These challenges are basic enemy wave scenarios, but they are used to recreate the most hectic moments in the game instantly. These moments are pretty much the craziest and hardest parts of the game without the story, or level progression attached. While it is just a whole bunch of enemy waves, it is still fun and adds more gameplay value to the game. 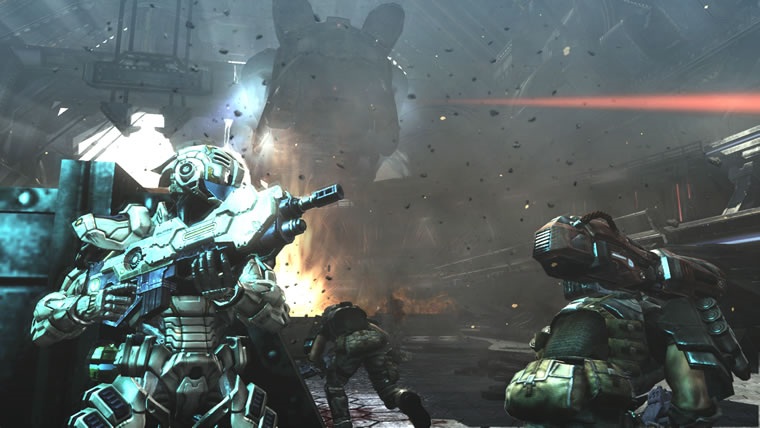 Audio & Graphics
The audio easily fits in with the pace of the game, and the voice acting isn’t that bad either. The only annoying aspect within the audio is the one liners that everyone spits out. At first I found it amusing that whenever someone on my team got in my way, Sam would yell at the person and tell him to “move out of the way”; it felt like he was saving me the trouble of yelling it myself. Sadly, after a while it just became annoying and I wish they would all just shut up; but it doesn’t really take away from the fun of the game that much.

The graphics are superb. There are so many missiles on screen that I am amazed that I rarely saw any frame rate issues at all. The game seemed so smooth, and fast. The levels blow up around you, missiles come from everywhere, and robots blow up in a beautiful array of sparks and metal bits. What is even cooler, is when you focus and slow down everything around you. When you do this, you can see the bullets flying past you and the missiles slowly traveling towards you. Another nice little addition is that smoking in the game isn’t just something the main character does during cutscenes, there is actually a button that lets you take a smoke break. 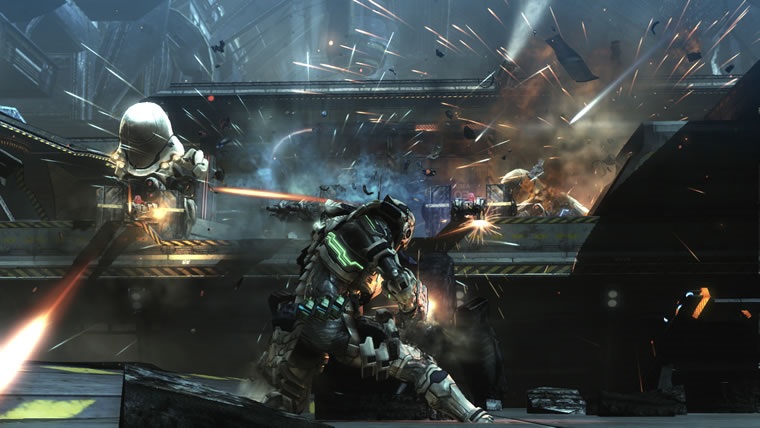 Achievements
The achievement list is pretty easy. A majority of them can be achieved by simply playing the game. There are two sets of difficulty based achievements: one for beating each level and the game, and one for doing the same thing on hard or above. Then there is the statue achievements, which requires you to find all 112 statues in the game. This is the obligatory hidden item achievement, that seems to be necessary in every game. They don’t even do anything, other then add to your overall score if you find them. Other than those, the rest can be obtained by doing certain tasks or beating a certain boss in a certain way. Luckily the game is broken up into a whole bunch of levels and chapters, so doing any level specific achievements only requires you to load that level back up (if you have unlocked it through story progression). 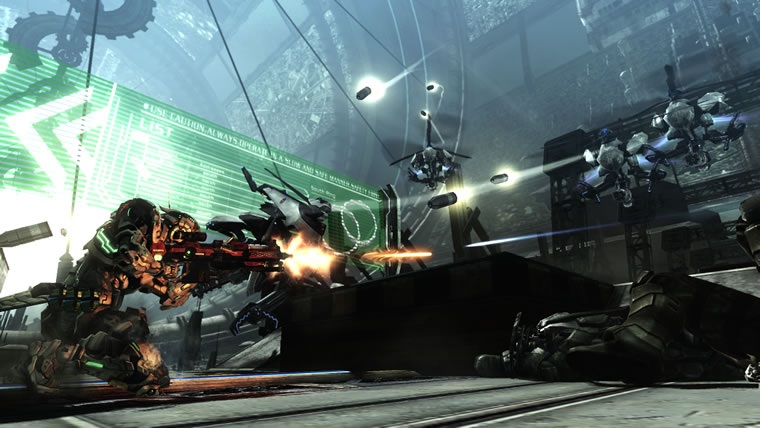 Overview
While Vanquish never really sucks you into the story and most of the characters are easily forgettable; the gameplay easily makes up for all of that. Bullets flying, robots blowing up into a million pieces, epic boss fights; the game yells “FUN!” and lives up to its word. Most third person shooters are pretty slow paced and require  a lot of cover and shooting, Vanquish speeds everything up and cranks the insanity up a notch. There is even a button that lets you take a smoke break in the middle of all the insanity. Since it is so fun; however, the game seems pretty short and calls for about 6 or 7 hours of playing time based on skill level and difficulty. The “hard” and “god hard” settings will take a lot longer if you aren’t that good at the game though. Luckily, there are challenges to complete and the “God Hard” Difficulty that you unlock after beating the game on Hard. These additions are nice for a bit of replay value.
I give Vanquish

NOTE: I do not condone smoking in any way, form, or fashion. I just found it to be one of those neat little additions that fit in so perfectly while at the same time not being required at all for the overall gameplay experience. Small touches like that are rare in games these days.