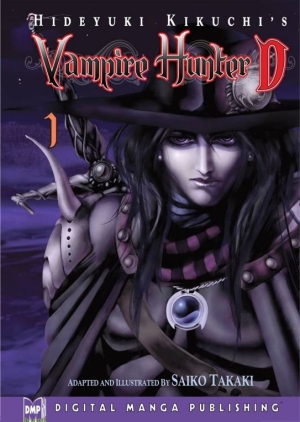 Overview
Hideyuki Kikuchi and his Vampire Hunter D series have been around nearly three decades. The series has seen animated films, audio dramas, video games, and more. The question remains, though: How does mangaka Saiko Takaki’s take of the worlds best vampire hunter hold up? How well does the first volume in the series do?

Story
The world of Vampire Hunter D is one far removed from anything we’ve ever known. The world’s great powers took aim at one another and destroyed earth as we know it with nuclear war. Radiation and cosmic rays then turned many beings into mutants, throwing mankind back into the dark ages. Out of the darkness, a power vacuum was created. Vampires known as the nobility rose to seize power, and they held onto it tightly for nearly 5,000 years. That’s when other beings, spawned by radiation and more cosmic rays, began to make themselves known. With great strength, agility, and wisdom, they alone could withstand the nobility. They came to be known as “Vampire Hunters.”

When we’re first introduced to our hero, he’s alone on a road. As he’s traveling, he encounters a beautiful young woman who attacks him with a whip. When she realizes that he is no mere bandit, but is actually a vampire hunter, she begs to enlist his help in exchange for food and a place to sleep. Then she reveals two deep puncture wounds on her neck – the “kiss of the nobility.” Upon seeing the bite marks, he agrees to enter her employ. She then introduces herself as Doris Lang.

After an encounter with Larmica, Count Magnus Lee’s daughter, on the ranch, the true nature of the plot is revealed. Count Magnus considers Doris to be the most beautiful girl in the land and wishes to take her for his bride. Through happenstance, Doris and D are soon separated. We’re also introduced to a local gang known the Fiend Corp who quickly form a vendetta when Doris is kept from their clutches by D.

Through the various encounters D has in the first entry in the series, we’re shown not only how masterful he is with swordplay, but also his deep knowledge of the lore in the world around him. It’s also easy to see that, much like an ace fighter pilot, D stays cool as ice in virtually every situation. Whether he’s fighting bandits with stolen magic, vampires, werewolves, or other mystical creatures, he’s the man you’ll want for the job.

Vampire Hunter D, Volume 1 does a fine job establishing the players and all of their motivations. While D and Doris are clearly the focal points of the story, the effort was clearly put in to develop several secondary characters. That helps give more weight to the decisions they make that help drive the plot. The story also keeps the pace moving at a solid clip and the setting and plot really draw you into the world.

If I had to levy an argument against the story, it would have to be a lack of driving force for the next entry in the series. With a few very minor exceptions, every story arc was closed with a satisfying conclusion. That creates a satisfying read for a single manga, but leaves little tension to build up for any future entries in the series. Fortunately, Volume 1 closes with D’s air of mystery intact. I’ll be quite interested to see what he encounters in future volumes.

Artwork
The artwork in Volume 1 feels a bit broken in terms of pace. It’s clear that illustrator Saiko Takaki was trying to find her footing with the first bit of the manga. Faces often feel as though they’re sometimes a bit warped. Doris, in particular, can feel somewhat off-putting, especially in the first few pages. She’s referred to as one of the most beautiful ladies around, but it feels as though there’s something repulsive about her facial features. Several of the action scenes feel as though their significance is hampered by an overabundance of of action maneuvers and objects in the scenes.

Fortunately, about a quarter of the way through the manga, Ms. Takaki seems to find her pace. Action scenes feel more fluid and less bogged down. Characters seem to maintain a pleasantly consistent style about them as well. Future installments promise to be enjoyable to take in from an aesthetic viewpoint.

Extra Content
In terms of extra content for Vampire Hunter D, Volume 1, there is very little to keep yourself amused with. The afterword Ms. Takaki put in provided some fantastic insight into her feelings as she worked on Volume 1 – the stress she went through to get her pacing, the anguish of unsurety, and her trip to Los Angeles all provide something to help us understand where she’s coming from and what she endured to deliver the manga to readers everywhere.

Overall
Overall, Vampire Hunter D, Volume 1 provided a solid first showing . Though the art started off a little rough, it quickly picked up. A good story with great pacing and excellent character development also helped drive the story. After having read the first volume, the series promises to deliver an exciting story with excellent narrative and entertaining artwork.