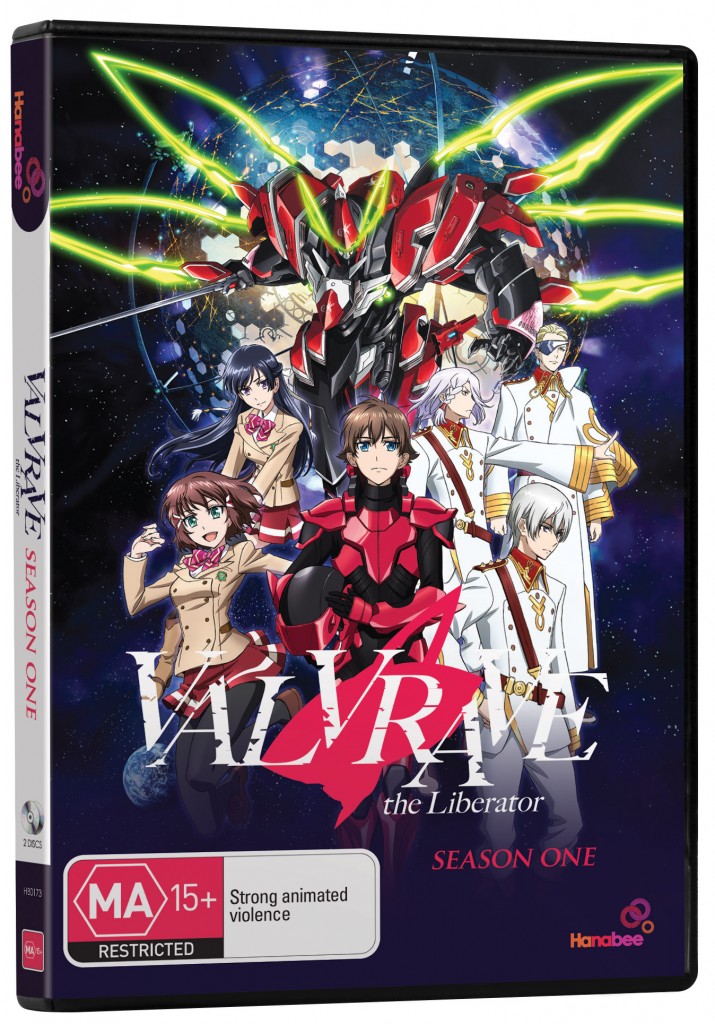 On the surface, Valvrave the Liberator seems like many other anime series out there. The characters are based on typical anime character archetypes and the plot is unoriginal. An anime series should not always be judged by its cover, however, because there is always a possibility that it will turn out to be entertaining and engaging despite its flaws. Is this mecha series worth checking out despite its familiar premise?

In the year 71 of the True Calendar, 70% of humanity is now living in space following the development of a Dyson Sphere. There are two main superpowers: the Atlantic Rim United States, or ARUS, and the Dorssian Military Pact Federation. Alongside these two forces is the prosperous and neutral nation of JIOR. Module 77, one of the spheres of the peaceful nation of JIOR, is the home of Sakimori High School. At first glance, Sakimori student Haruto Tokishima seems just like any other high school student. He has a crush on his friend Shoko Sashinami and is not strong, opting to avoid conflict and believing that everyone should just go ‘halfsies’ on everything rather than fighting to win something outright. When the Dorssian Military Pact Federation launches a surprise attack on JIOR, Haruto must make a significant sacrifice if he is to avenge the death of Shoko: he must give up his humanity in order to pilot the mecha known as ‘Valvrave’ to save JIOR from Dorssian attack. 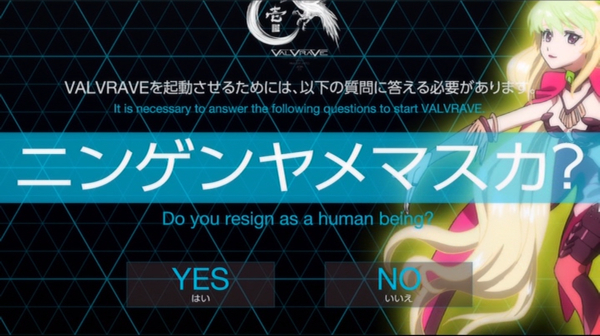 Valvrave the Liberator is not about originality or logic. Many people will be familiar with the ‘high school boy must pilot a giant mecha in order to save the world’ plot, but this is almost an entertaining series in spite of the weak characterisation and ridiculous plot. Haruto does not consider the consequences of piloting the available mecha and ends up becoming a global hero at the consequence of becoming “cursed”; he becomes what is essentially a vampire prone to attacks that compel him to bite and transfer his consciousness to a male or sexually assault a female. What is disappointing and offensive about this new trait is the use of molestation and then rape as an entirely pointless plot device. It ultimately serves no purpose whatsoever and is not discussed with even the slightest hint of delicacy. The writing for the series was already seriously unintelligent and illogical prior to the usage of that ‘plot device’, but this event features the series’ writing at its absolute worst. 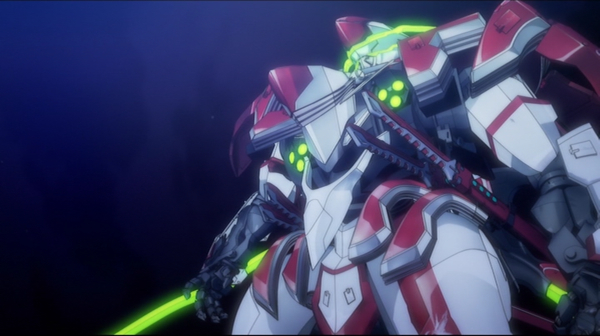 This series does not provide one single perspective for viewers. We see how many different teenagers see the world, how they deal with conflict and trauma and how they deal with or hide their emotions. We see things through the eyes of a group of teenagers who go from being regular high school students to leaders of an independent nation, albeit in an unrealistically short period of time. They do not want to give up what they have without a fight, and they fight to protect what they love. Even during the midst of a full-scale war, they stay positive by singing hilarious songs and looking to the future. They remain as calm as possible and tell us that as long as people have hopes and dreams and remain positive we can achieve anything. It is unusual for an anime series to show us how teenagers perceive the world and everything around them in this way, and that is one of the few things that makes this series compelling and engaging at all. Unfortunately, men are still the ones doing all the hard labour and women are still the ones doing the cooking and cleaning. This is especially disappointing given that Valvrave is set in the distant future and therefore could have taken the opportunity to portray an equal society that has moved away from sexist notions of gender that paint men as strong and women as weak. Multiple voices may be presented, but only one, extremely rigid and problematic idea about gender is promoted.

The animation is rather good. The movements of the mecha suits are animated with careful detail and the animation is consistently fluid even during the action scenes, with the rendition of Haruto’s Valvrave using its Harikiri Attack being particularly impressive. Although some series do not find the right balance between traditional animation and CGI, CGI is expertly utilised here and never detracts from the viewing experience. There is a lot of violence and blood right from the get-go, and there is some particularly shocking imagery later on in the season, but viewers may enjoy the fast-paced action scenes that it has to offer. 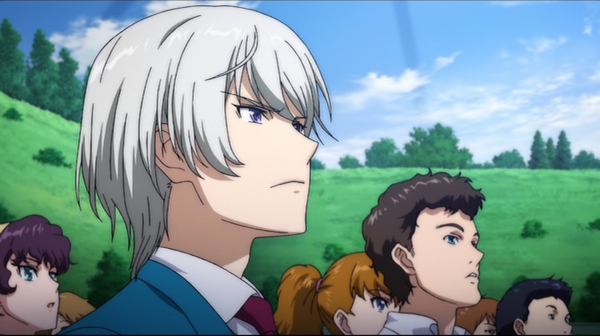 The series’ one major visual flaw is the ‘fan-service’, which is blatantly contrived and not even remotely entertaining. It does not contribute to the plot or character development in any way whatsoever. A couple of times throughout the season, a large painting of a naked girl is shown in various locations such as on a road and in the school’s sporting field. This is completely unnecessary fan-service and is one of the most ridiculous shots in the series at that point, although it is by no means the most ridiculous or disturbing shot overall.

The English subtitles in this release are mostly okay, but a couple of issues occur every so often. This includes capital letters being used incorrectly on more than one occasion, punctuation being left out on at least one occasion and a blatantly obvious typo being present; “IFS huge” was displayed when the subtitles should have read “It’s huge” in one episode. Neither the opening theme song nor the ending theme songs are subtitled. The same goes for the insert songs, except for “Good Luck For You,” the song in episode 5 that was sung by the students of Sakimori High School. 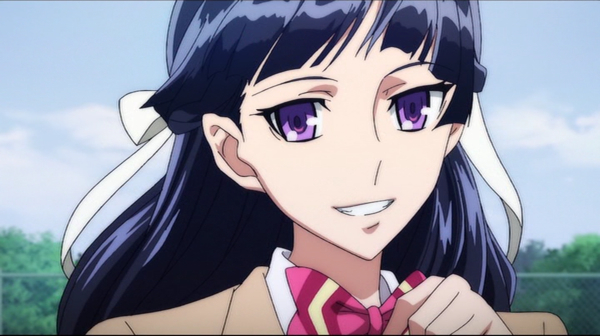 The audio will leave nothing to be desired for most people except those hoping for an English dub. The background music is skillfully composed and orchestrated, and it adds to the emotional feel of the series, or rather gives it one in the first place. The opening theme song and two ending theme songs are somewhat decent pop songs, but what stands out are the insert songs, which fit in very well with the scenes they accompany.

On-disc extras are minimal in this release. The original commercials and the textless opening and ending animation sequences are included. 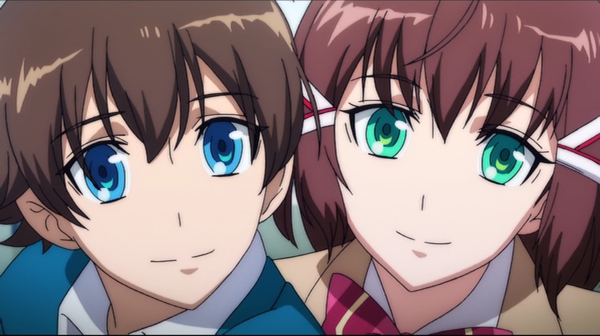 Valvrave the Liberator is a series that will mainly entertain its core audience of mecha fans if anyone at all. It falls victim to many of the trappings of modern manga and anime series, and goes too far in its attempt to constantly keep viewers guessing. This season’s final episode ends quite abruptly, with a preview of season two after the credits promising answers to the many questions raised so far and a darker continuation of the story. One can hope that the writing drastically improves in the second half of this disturbing series.

Unexpectedly decent visuals and a strong musical score make this series watchable, but its poor writing weighs it down too much to allow it to truly stand out.
5