Games of time management have been around for quite a while, with Diner Dash arguably unleashing the once niche genre into the mainstream. Valet Parking 1989 sets out to take on the genre by having the player park cars quickly and keep clients pleased in a late 1980’s setting. Oddly enough, this quirky downloadble title does it’s job rather well, but with a few dings and scratches to be found along the way. So how is the finished product? Here is my review for Valet Parking 1989 for the Nintendo DSiWare.

Story
I remember when I first heard of Valet Parking 1989, I was instantly intrigued as the whole concept of parking cars in the 80’s seemed to be an interesting concept that we just don’t see too often (or ever from my knowledge). If there is one thing that this title does well, it is way it captures it’s 1980’s setting to a near perfect degree. Now I was 2 years old in 1989, so my memory of the decade comes with VH1 specials and John Hughes movie marathons, but I still feel that anyone wanting a throwback to the neon lit generation might want to at least give this title a look based on the humorous writing and visuals alone. 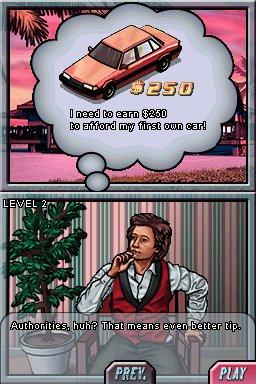 Valet Parking 1989 starts you out as a young man with a dream of earning enough money to get a car and then going to the beach. Luckily enough, a valet service based in Hollywood offers up a job that the main character instantly accepts. To earn money, our young valet must park cars for some of the biggest names in Hollywood and keep their vast array of vehicles in one piece to earn a hefty bonus from each client. I won’t spoil how this ends up, but this quirky tale feels like it ripped right out of a teen flick from the time period as the characters, clothes, and even mullets (Yes, you have a mullet, too) are very prominent within the game.

I think the star quality of this valet parking experience is the “celebrity clients” that can be found within. No names are officially dropped, but we do see clients who eerily resemble a red-jacketed Eddie Murphy, Debbie Gibson, and even the Hoff himself. Even the dialogue that these celebs use represent the characters correctly as over-the-top stereotypes run a muck throughout the game. It is easy to see that Zordix certainly put a lot of thought into capturing the crazy year of 1989, and while the charm loses it’s luster after a while due to repetition, Valet Parking 1989 would be a hollow experience without all of the fine-tuned detail presented.

Gameplay
Once you start your job as a valet you instantly are thrown into the story mode, where you simply park cars in a timely fashion for your clients. Interestingly enough, there is a nice layer of strategy within the game that ups the challenge as you progress. At the start of a level, you are given an option by your boss to get a good look at the parking lot before getting started. This is a feature I overlooked at first, but over time it becomes crucial to scope out the map if you want to be successful due to the difference of lots and quantity of customers within each level. Standard vehicles can be parked in a standard parking space, while limos and monster trucks (yes, there are monster trucks) each have their own special spaces. 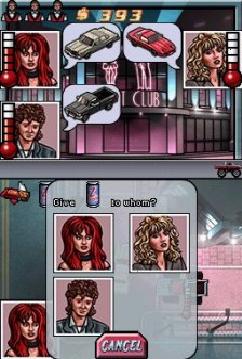 Valet Parking 1989 is completely controlled by the touch screen. Once you click “OK” to get the game started, guests will start lining up in their cars, where you must drag the car with the stylus to fit it into a specific spot. Once the client is done with their visit, their image will be displayed at the top screen where you then must back the car out and direct it to the exit. To create a challenge, each guest has a meter attached that resembles a thermometer. This meter measures mood, and when you take too long to park or deliver a car, the guest will get angry and leave. The player also must be extremely delicate with these fancy rides, as if you crash or damage a car, it can lead to losing the client completely or take a bit of cash out of your ending salary.

The drag and pull controls work well enough, but they are also responsible for the some of the frustration found in the game. The first few levels literally fly by within minutes as parking is a fairly simple task if you take your time, but as the game progresses, obstacles such as incoming traffic and distant parking spaces appear to up the difficulty. The number of clients also jumps up greatly later on, leading to an absolutely chaotic environment where cars are constantly coming in and in need of going out. The main problem I had with this is that it was really hard to actually park a car under such a strain and still keep guests happy. Yes, that is the point of the game, but the controls can make even the smallest cars control like large buses and turning a car is a lot more difficult than it should be, which is more noticeable as the game gets more hectic. Thankfully, Zordix did ease this strain with the nice addition of gifts.

At times, guests will be so pleased with your performance that they will give out gifts such as chocolate, food items, and even handcuffs. The purpose of these gifts is to pass them on to clients to cool down their mood, buying a small bit of precious time in order to better get organized. This doesn’t completely make up for the control mechanics, but it does add a refreshing element into the gameplay that is very useful during the more intense moments.

The story mode can be beaten within an hour, but those who want to give their brain a break will have to turn to keeping the DS idle as no saving points can be found within the game. This means that if you lose far along in the game, you must completely restart everything and go at it again. In this day and age where Nintendo are adding save points to Game Boy titles on the Virtual Console, Valet Parking 1989’s biggest flaw comes as simply not incorporating any form of checkpoints. It’s a small gripe, but I feel handheld titles should almost require a save point or even a password system due to the platform being portable. While the game is fun, this little flaw alone killed a lot of my desire to replay after finally completing the main story mode. For those who do stick it out, levels for an endless mode can be unlocked. Endless Mode is simply a quest for a high score, with the player going to their favorite level and parking cars until it is game over. I played quite a bit of this to master my parking skills, but there really isn’t any incentive to play this mode or even the story mode again for that matter as nothing changes or is offered make the game truly addictive. 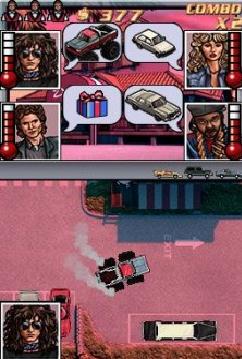 Graphics/Audio
The presentation found in Valet Parking 1989 is in my opinion absolutely phenomenal considering the platform. From the well detailed characters to to the neon-lit structures, you can easily see the time that went into making this production. The top-down camera view is very reminiscent of the early GTA titles, but with a lot more color and atmosphere mixed in, delivering a very memorable result. Cutscenes were given a frame-by-frame animation treatment, which helps make the game feel like it came straight out of the time period as well.

Music is another trait that this game does wonderfully. Synthesized remixes of popular tracks from the late 80’s kick in at various times and add a load of personality to each character found within the game. Even though the midi format is used, every beat feels completely appropriate and becomes an earworm you will have to fight for hours after putting the game down later on.

Overall
Valet Parking 1989 brings about a perfect recipe for success. The gameplay is fun for the most part, the settings are well produced and memorable, and the quirky humor works wonders to better the overall experience. It should be a perfect game, as I feel it was close to truly delivering in every way, but sadly, some choices made in production just hold the game back a bit too much. The lack of a checkpoint/save system makes the whole game feel like a commitment, an issue that a casual title should not present. Another huge blow to the game is the lack of content that harms the replay value greatly. Even with these glaring flaws, at the 500 point price, I still feel like I can recommend this title on presentation value alone as this odd take on the genre is one I will remember due to it’s well crafted burst of 80’s greatness that is a fun ride before coming to a rather abrupt finish.