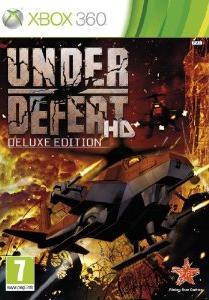 Overview:
The current generation of consoles, specifically the Xbox 360, has proven itself to be a popular and simple means to resurrect a number of Dreamcast games; last year’s Dreamcast Collection being another that came on disc, not to mention HD remakes of games like Jet Set Radio and Ikagura ported on Xbox Live Arcade. Many of these games harbour fond memories from the cult console. Under Defeat, on the other hand, is a little different as, unless they imported it, it won’t have touched players’ Dreamcasts this side of Japan, so Rising Star Games’ release of the game carries extra significance. 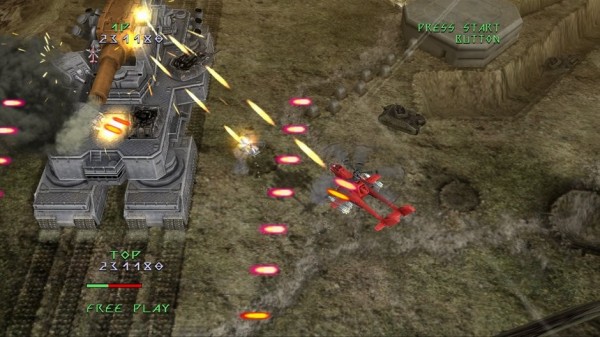 Story:
What does that say…oh it’s gone. Like most of these older games, the text is a bit small for modern TVs so the brief backstory information is gone before you had a chance to read it. Not that you need a reason to blow up everything in sight with a blast ‘em up of this nature, here’s what the prologue says:

“For more than ten years, the continent has been divided as the way between the Empire and the Union raged on.

With casualties mounting and exhaustion at its peak, representatives of each side sought to reach a compromise, finally agreeing upon a date for a temporary ceasefire.

However, in the days before the armies were scheduled to lay down their weapons, neither side hesitated to continue fighting, unveiling new tools of war and experimental combat vehicles.

And though the sanction of peace lie just before them, a battle of unprecedented scale was about to begin…”

Gameplay:
Under Defeat is a scrolling shoot ’em up much like Ikagura if not for the 3D view and its implications. You control a helicopter with some serious firepower and can rain thunder down upon the enemy in one of three directions – diagonal right, diagonal left or straight ahead – while you move your aircraft around the screen. Though free to move within the borders of the screen, you are guided through the levels on-rails and you gun down anything that comes into view.

The two main weapons are a rapid fire chain gun which shoots in the direction the vehicle is pointing, and a bomb with a blast radius comparable to that of a small nuke which fills the screen with a fiery explosion. Going into the character selection menu reveals a choice of choppers of different shape and size, which come with their own variation of the weapons, including a new helicopter exclusive to this Deluxe Edition of the game. 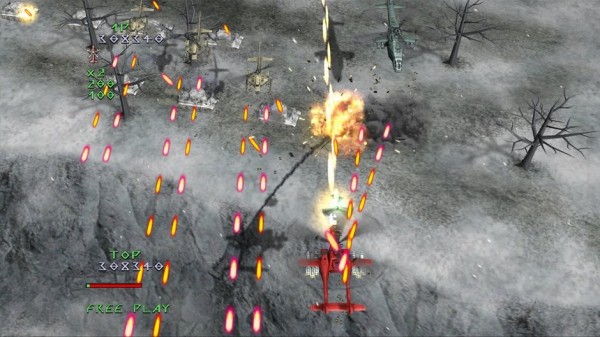 It’s not clear whether you’re the good guy or the bad guy (I’m inclined to say bad given the fact you’re invading the opposition with a souped-up helicopeter, a destructive one man army from hell). Either way there’s a lot of casualties for both sides: them because of your superior weaponry; you because the game is tough as old boot leather.

It’s true that some people, the hardcore, as they are known, will probably enjoy this challenge and will have no qualms replaying the campaign repeatedly, starting from the beginning when they get Game Over each time with a new determination to beat it with what they learned from last time. They will make use of the practice modes to plan out the route through each level and each wave of enemy attack. It can be done; that’s why the practice modes are there. However, years of conditioning from modern games, which teach you you’re toughest thing around and if you fail you can just try again, have weakened some players. To this group, the game becomes misery.

To my opinion this goes back to its arcade roots where it was designed to eat up all your money. By being difficult you had to put in more money for extra credits. For no apparent reason, this has been carried over to this retail release in the form of a limited number of credits, effectively locking off the later stages of the game to less able players who won’t be good enough to reach them. What’s really ridiculous is how simple it would have been to have an option for infinite continues or at least greatly increased continues in there as well as the normal, difficult amount. I can only hope an online update could rectify this to allow all to experience the entire game. 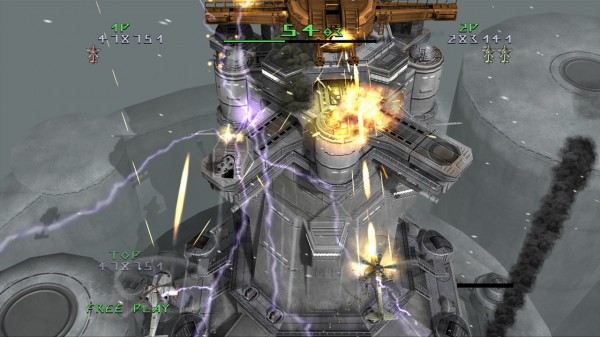 False hope is offered in the form of co-op mode. A second player can easily drop by pressing start at any time. With double the firepower and twice as many continues you convince yourself it is possible, but then you realise you’re both eating into the same tight-fisted allowance of continues that a lone player would have. In fact, split between two players – despite being less swamped thanks to a second player to help out – the continues can be used up even faster. That said, the game is more entertaining played on local co-op, it’s just a shame the Game Over system doesn’t grant as much freedom as many players require.

Visuals & Audio:
The two main modes are New Order mode and Arcade mode and each come with their own ‘practice’ modes where you can play through any level you’ve reached in the relevant game mode. New Order mode features the upgraded visuals and the expanded 16:9 screen dimensions, around two times the size of the screen of the original arcade game. Arcade mode is a straight port of the original, featuring the narrow screen that would have been on the arcade cabinet. Both the original and the HD version aren’t lookers, although, like the story, it makes little difference as its value lies solely in gametal. The soundtrack is the brand of Japanese rock synonymous with arcade cabinets. Along with a digital art book, the soundtrack is present on a separate bonus CD in this Deluxe Edition, both of which you can appreciate after playing the game but are mainly there for the benefit of the most devoted of fans.

Overall:
Like most Japanese games, it’s an acquired taste. If you’ve got the patience to die over and over, restart from the beginning, and practice levels in the dedicated game modes to work out a way through enemy attack patterns, then maybe you’re one flight cadet who will make the cut and end up enjoying it. But if, like me, your attention span has been whittled away by the nature of modern games, you’re likely to concede defeat before making it to the end of the game. You’ve got to remember it’s from a time when you were the player not the winner: if you wanted success in this era of gaming you had to earn it through hard slog and weren’t just handed victory on a plate because you were the human against computers.