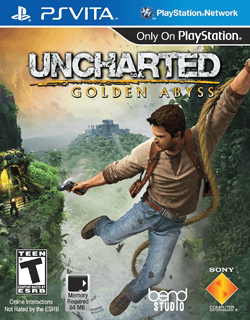 Nathan Drake has returned to the gaming world. However, rather than tearing it up on the big screen, he is on a new adventure in your hands with Uncharted: Golden Abyss. The Playstation Vita launch title is considered the cream of the crop and it is hard to disagree with that point. The game uses as many of the Vita-specific features to create new gameplay experiences, the visuals are impressive and the story, although not the same quality of the console counterparts, still manages to deliver a satisfying narrative, backed up by the return of Nolan North as Nathan Drake. So, is this one abyss worth diving into? 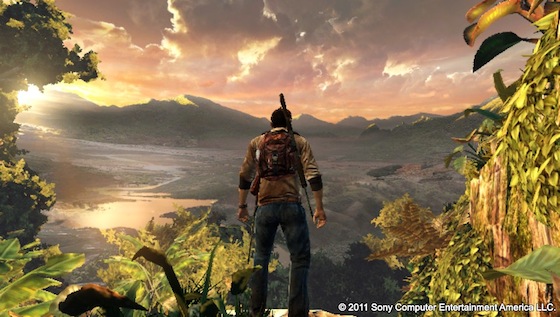 The game is set before the events of Drake’s Fortune as a stand alone story, not a prequel. Nathan Drake and one of his old partners, Jason Dante, are in the jungles of Central America. Drake is hired to help Dante decipher various symbols he has discovered. However, he leaves out that they are entering a camp owned by the sinister and corrupt General Guerrero.  Drake and Dante discover a mass grave full of dead Spanish men and loads of gold. This leads to a meeting with Marisa Chase, who has also come to the site for her own goal. Further discoveries at the grave site sends Drake on a wild goose chase in search for one of the Seven Cities of Gold.

The story itself is enthralling, yet there were times where I predicted what would happen next and it did happen, falling into some action clichés. However, it did not deter from the experience I had with the story. It had elements that make an Uncharted story great: beautiful settings, well-developed characters and over the top action. Both suspense and tension are used well within the story. There will be times where the player will generally worry about the characters. However, I do have to talk about the plot. Plot, in this context, is more on how the story is told. It is told through chapters, just like its console counterpart. My concern was how it continuously jumped between Drake and different character. They were coming in and out like a revolving door. It distorted the plot somewhat and it did get quite annoying. 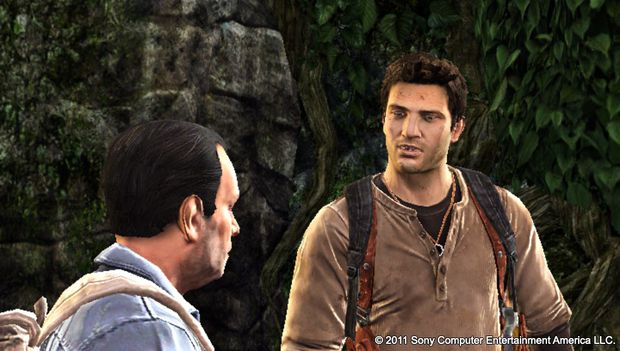 The characters all have a certain archetype attached to them, which defines their personality. Drake doesn’t change one bit, which is great, seeing that I believe he is a great character. His sense of humour and often opinionated mind are evident. He also points out some absurd moments that he must endure. Expect the same sort of character interactions where Drake’s personality truly shines. Dante is the trickster of the game. He sports a Western American accent with the attitude to boot. He tends to be cocky and arrogant due to the wealth that he has obtained throughout his life. Chase is Drake’s ally with her own mission: finding her grandfather, who happens to be an archaeologist. Upon meeting Drake, she tries to persuade Drake to be partners, despite only meeting him a few moments ago. She maintains distaste for guns throughout the game. That leaves General Guerrero, the guy everyone will hate. The antagonist of the story, he pursues what Drake is pursuing. His military stance makes him arrogant and bloodthirsty. Also expect a favourite to return in the second half of the game, someone who has been close to Drake since his teenage years.

Now, if it makes the character interesting and unique, then using a certain archetype as the foundation is a must. The problem here is that the archetype shone through the characters. As I have said, they defined the characters and made them a little predictable. It does not mean I didn’t enjoy them. I believe a little more effort into character development would have made them stand on the same level as Drake, who is definitely the choice character of the game. There was also some stereotyping with the characters. Let’s look at the antagonist, General Guerrero. When there is a Central American antagonist in these types of stories, it is usually a general or someone in the drug business. Compared to Katherine Marlow of Uncharted 3, General Guerrero could have been less stereotypical. Maybe he could have been the head of a secret order or a rival treasure hunter. It does not mean he didn’t achieve his goal in terms of the character. I still hated the man and wanted to beat him with Drake’s fists. 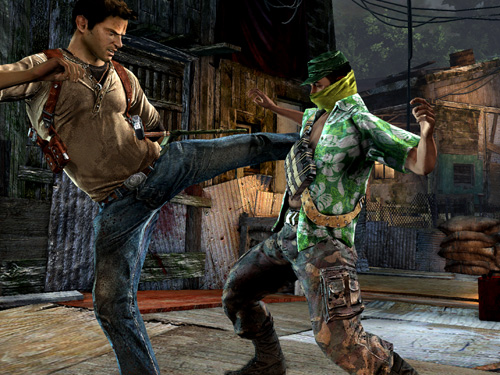 The core mechanics of the game have not changed in comparison of the console counterparts. Drake still jumps, climbs and shoots his way through jungles and ancient structures. The third person action is great on the portable. Aiming is not a problem due to the inclusion of the right stick. The Vita’s inclusion of the right stick was one of the best inclusions on the device. Alternatively, aiming can be performed by moving the Vita around. This is one of the gameplay mechanics that use one of the Vita’s features, which would be motion control. The front touchscreen and the rear touch pad are also used in the game.

The front touchscreen is used in a variety of mechanics. Most of the time, it involves a simple tap of the screen on a specific icon. One example is reloading. All players have to do is to tap the gun icon at the upper left corner of the screen and Drake will reload. Touch icons seems to be a common theme. The same happens in melee combat. A fist icon will appear on the enemy, as well as in a column on the right side of the screen. This will initiate the fistfight, which is a time based fight, just like the console Uncharted games. Drake’s journal is also accessed via the touch screen. Once inside the journal, it acts as a book. One can flip the pages to see what they have collected throughout Drake’s journey. Climbing, a core mechanic in Uncharted, also uses the touch capabilities. Players can draw a path for Drake to climb.