Overview:
Even though there is a brand new handheld gaming device circulating the market now from Sony, that new device is almost devoid of a certain genre of game. This missing genre is beloved by a large group of gamers but thankfully the PSP is still receiving plenty of love from developers and publishers behind this genre.

The RPG genre is one that has seen much success on portable handhelds and XSEED Games isn’t about to let the PSP go without at least one more RPG to round out the platform’s library. Now that they have released Unchained Blades onto the PlayStation Network, is it worth your time?

Story:
The world of Unchained Blades is populated by mythical beings and creatures of fantasy and all of these creatures are ruled by a Goddess. However there is a special journey that these creatures can take to meet with the Goddess and be granted any wish they want. Players will take the roll of the most powerful dragon in the land, Fang (all character names can be changed by the player however.) 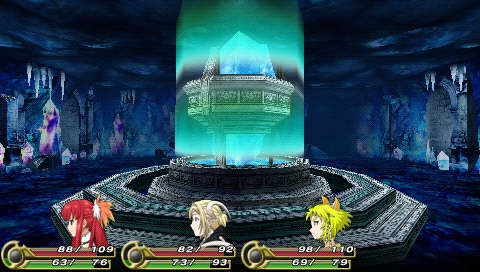 With his massive strength he was able to fly right to the Goddess and rather than have her grant a wish, he simply demanded that she tell him where the strongest enemy in the world is. As one may expect, this greatly displeases the Goddess, who then curses him by removing all of his dragon powers and sending him crashing to Earth. Here Fang learns about the proper way to reach the Goddess and sets out on a Journey to regain his abilities and obtain his revenge.

Along the way players will come across a number of other allies who all have their own wish to make and join up with Fang in his journey. While the storyline itself is far from original, the characters themselves help make up for the mundane plot. One of the things that makes these characters special is the fact that they two are monsters, such as a golem prince, phoenix girl or medusa. 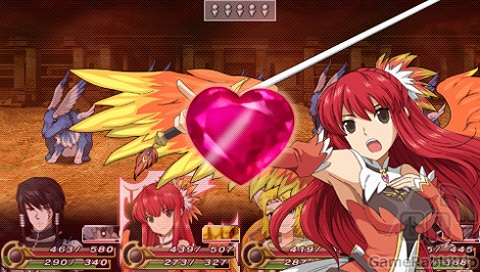 These characters’ interactions with one another are quite amusing and will help keep the story enjoyable, especially when certain characters start to show interest in one another or reveal some hidden sides to their personalities.

Visuals:
Now one thing that makes Unchained Blades unique is the fact that all of the main characters were actually drawn by different artists. This means that you will see a lot of variety with the character’s basic designs, though they all follow an anime-styled fantasy theme. These individual artists have done a great job with the main characters as they are one of the treats of playing Unchained Blades. In fact, nearly all of the characters you come across, both enemy and NPC are beautifully designed. 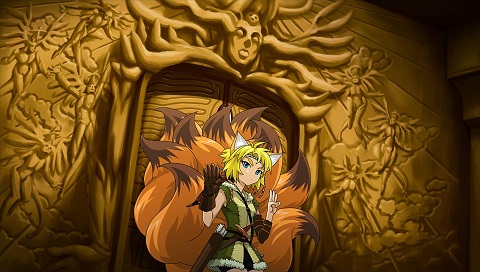 Unfortunately the same can not be said about the actual dungeons you explore. Considering players will be spending a large amount of their time traversing the halls of these dungeons, it would have been better if they were at least a little bit more diverse. Now while each dungeon does follow a certain theme, nearly every single hallway inside the dungeon will look the same as the last, meaning players will often spend hours walking through a repetitive environment with only a few changes here and there.

Audio:
The title features some nice background music that helps accentuate the mood of battle or exploring various dungeons. As for the game’s sound effects, they are serviceable at best. Thankfully Unchained Blades does feature voice work for the main cast, though it is worth noting that not every piece of dialogue between the characters is voiced. When the characters do speak with one another their voice actors perform an adequate enough job portraying each characters’ emotions and personalities.

Gameplay:
While Unchained Blades may be classified as an RPG, it is a bit of an unconventional title to say the least.  The reason for this being the fact that players will actually be dungeon-crawling through a first person view similar to what was experienced in the classic title Wizardry. This means that as players are advancing through the dungeon they will not see their characters moving, but will instead be walking through an area as if they themselves were there. 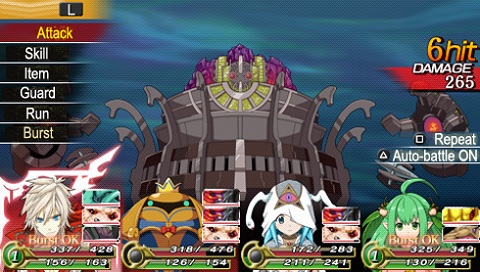 Interestingly enough, combat is also fought in this same first person style.  Players will experience random encounters while walking through a dungeon and face off against a number of opponents which can range from only one monster, to fifteen at a time. These large scale battles can sometimes mean up to three screens full of enemies to defeat, making this turn based battle system a fight for your party’s life.

Now at any given time, players can have a party of up to four main characters which are called “Masters” in the game. These masters possess a special ability which helps spice up the combat and also references the titles name, the Unchain ability. When you are battling against enemies, there is a chance that they will become influenced by one of the masters’ charisma or sufficiently wounded enough the player can unchain them through a simple mini-game, allowing the creature to join the party as a follower. It is a bit disconcerting however that there are many occasions an unchain circle will appear in the middle of your party’s attack turn, meaning some enemies which can be swayed to your side are often killed before you get a chance to unchain them.

Each master can have up to four followers added to each master, meaning that players can actually enter combat with up to twenty members at a time, though followers usually only serve as a method of blocking attacks at random, tacking damage at random or doing extra damage for linked skills. These followers also will have certain “anima” (elements) which can be applied to the Master, allowing them to perform special skills, meaning players will have to micromanage which followers are best for each character given the situation they are facing. 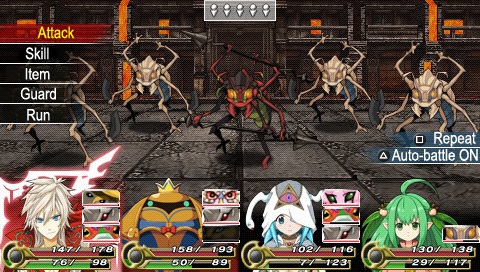 As players battle, their masters will level up as in any standard RPG, and players will also be given a few skill points which can then be applied to a branching upgrade tree which can boost various statistics as well as unlock new attack, upgrade and passive skills. As mentioned before, players will also have to worry about their charisma statistic as well, which levels up separately from their base character level. Performing well in a battle, such as finishing fast, using special attacks or taking little damage will result in boosted charisma while things such as running away, using healing items and other things will drop your charisma level.

Your charisma level affects how many followers you can have, the happiness of said followers as well as improve your chances of instantly allowing unchaining of enemies. This statistic is also affected by answering questions asked by your followers, though a large number of these questions have strange reactions which don’t make sense more often than not.

Managing the mood of your followers as well as switching them out for leveling purposes is almost essential for progressing through the game however, as there are a few moments players may be barred from advancing without competing in something called “Judgment Battles.” These battles are, to put it bluntly, very annoying and can also be a reason for heavy player grinding as they are fought by your actual followers instead of your main characters. In these battles players will simply press various quick time buttons as they scroll past while their followers mash up against the enemy’s followers in comically bad fashion. 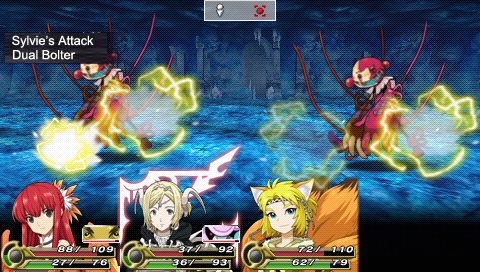 These battles tend to be optional, though when necessary they are a drain on players’ time inside the game, as they will need to try to unchain powerful followers which is always an iffy gamble or try to level up weaker followers in their party by grinding further. This is a bit of a hassle already, as often players will encounter difficulty spikes in the levels of enemies they are fighting, requiring the player to return to a previous area and grind for experience points and money to survive the next floor.

It is worth noting that, despite these difficulty spikes, players will usually be able to venture forth without much concern for their well-being thanks to Unchained Blades’ save system. Rather than forcing players to only save in town or at certain points in the dungeon, players can instead save anywhere in a dungeon they please, making risky ventures lose their edge.

Overall:
Unchained Blades takes a bit of a risk being released on the PlayStation Portable a bit late in its life and unfortunately the title does suffer from a few issues such as repetitive dungeons, excessive grinding and slightly questionable follower system. However despite these issues, those eager to pick up a long, engrossing RPG that holds true to a number of old-school mechanics while throwing in new ones to keep things interesting need look no further as Unchained Blades provides a slightly unconventional storyline alongside enjoyable gameplay.