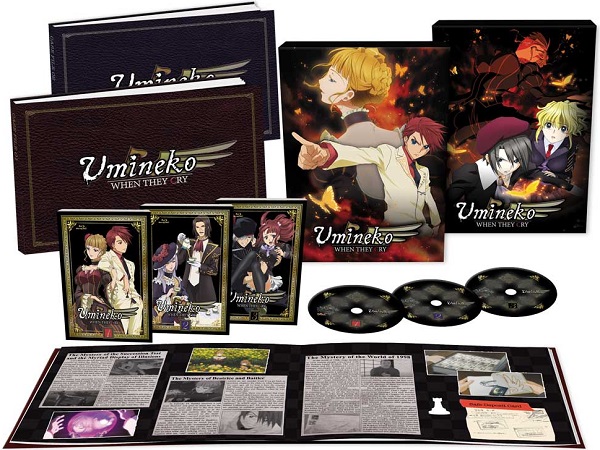 Overview:
Visual novels are games that many people may not even be aware of, mostly thanks to the fact that they are rarely released in the West by official means. However some of these visual novels contain compelling storylines full of interesting characters which many fans may never see. Thankfully, over the years, many visual novels have been adapted into anime and occasionally these anime manage to make their way overseas.

Such is the case with Umineko: When They Cry. Originally broken up into a series of visual novels, the anime was originally released back in 2009. Now, NIS America has brought the series over to North America in two volumes. Has this unique set of visual novels translated into an anime worth your money?

Story:
Umineko: When They Cry takes place on an isolated island named Rokkenjima which happens to be the home to an extremely wealthy family called the Ushiromiya family. The family patriarch, Kinzo, has suddenly been informed that he only has three months to live. Upon hearing this news the man cries “Beatrice!” into the night. The rest of the Ushiromiya family is assembled in a yearly gathering to go over their various business deals and family matters and also to find out who will inherit the vast fortune of the family once Kinzo passes. 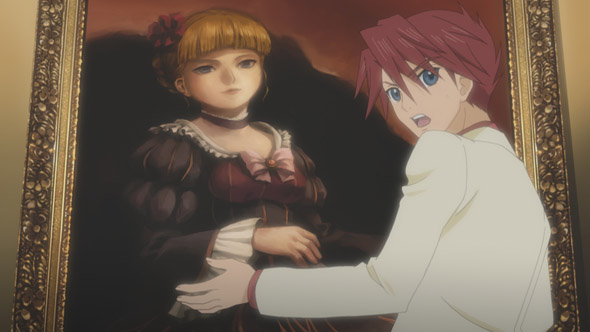 With enough money circulating amongst the family to feed a small country for years, tensions are high between family members, many of which perfectly fit the “too rich to care” character archetype (such as dismissing servants as furniture and married-into-the-family members useless.) However when the youngest family member begins to speak of a witch named Beatrice and a promise to said witch involving the family’s fortune, things begin to go south very fast.

As members of the family are found murdered in horrifying fashion and the body count rises, the mystery of who or what could be killing the family members on the island begins to mount. As Battler, the main focus of the story, tries to desperately find ways to explain the murders and discover the true culprit, the increasingly impossible murders, the cryptic messages left behind by the killer and the haunting words of the little girl begin to convince everyone that Beatrice, the witch, is behind everything. 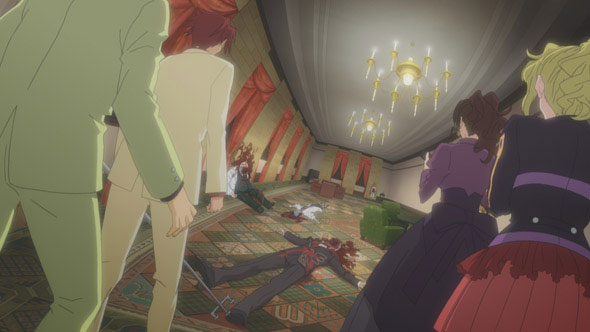 When only a few members of the family are left standing, Battler continues to doubt the fact that something as unscientific and impossible as magic could be causing these deaths. His steadfast denial holds true even as the last of the survivors are apparently killed at the hands of glowing butterflies. However when Beatrice reveals herself to be real, she finds Battler’s close-mindedness amusing and challenges him to either prove that a human could have committed said murders, or admit that magic exists and that she is a witch, dooming the family’s lives to be sacrificed for Beatrice’s full resurrection.

In what becomes a battle of wits and magic versus rationality, the members of the Ushiromiya family become trapped in an endless game of death where each member of the family is killed off in a number of gruesome ways in different orders in different scenarios, most of which involve a “closed door” puzzle similar to what one would find in a video game (i.e. Zero Escape series). This central plot point works well for the series initially, but slowly devolves into a complex and, regrettably under-explained anime series.

Perhaps it is due to the limitations of an anime series compared to the original visual novel format, but while the magical reasoning of Beatrice’s murders needs no explanation, the scientific reasoning of Battler actually has to be set within reason. However while the series loves to throw out references to many philosophical questions it also offers zero explanation for why said questions are even relevant to the current situation. Plus, many of his answers to the murders are practically laughable and taken at face value which will leave many with an unsatisfied feeling to the puzzles Battler tries to solve. 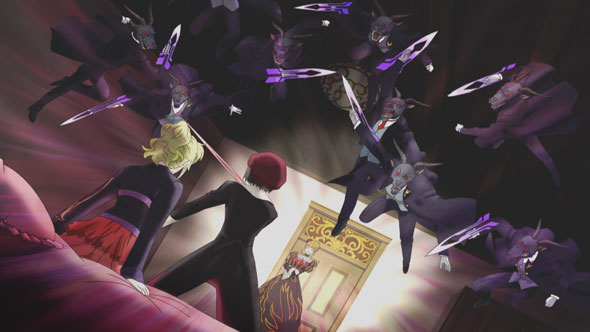 As for the series itself, every time the whole family is slaughtered, the “game” essentially restarts with every family member returning to life. As such the show is broken into five to six episode segments where Battler and the various family members must try to survive increasingly strange methods of murder. However as the show progresses, the anime slowly devolves from a story focused around mysterious murders, into one that seems to enjoy torturing the characters in the series. This grows even more bizarre as even more magical elements come into play a few game’s into the anime.

It is also worth noting that while there are eighteen family members to grow accustomed to and twenty six episodes to work with; many of the characters in Umineko’s personalities or desires are watered down, sometimes to the point that they are practically cannon-fodder for the show to kill off at any given moment. It is worth noting that there is a good reason for the way NIS America broke up the two separate volumes of Umineko: When They Cry, with eighteen episodes in Volume 1 and eight in Volume 2, but saying what that is would spoil some interesting developments. 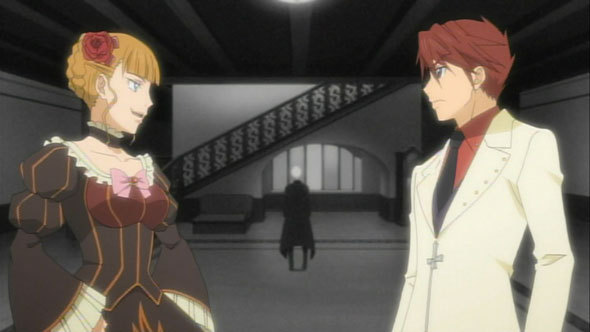 Ultimately, Umineko: When They Cry is a complex series in more ways than one. While the anime’s storyline may be interesting and the way that it is handled is unique, it is bogged down by poor explanation and detail, inane logic, a watered down cast of characters, many of whom’s only purpose is to die gruesomely and increasingly bizarre elements which seem to go against the show itself at times. Put all that together with an ending that will leave viewers with a larger question mark over their head’s than they ever had during the series itself, and we have an anime with so much squandered potential it is a shame.

Visuals:
Simply put, Umineko: When They Cry is a gorgeous show on Blu-ray and there are a number of reasons for this. Namely, the series, despite being a few years old now, is wonderfully animated with a wide-ranging color palette which is used effectively to emphasize dramatic or horrifying moments that take place in the series. With the crisp Blu-ray visuals, the presentation of the show overall is a treat for the eyes. 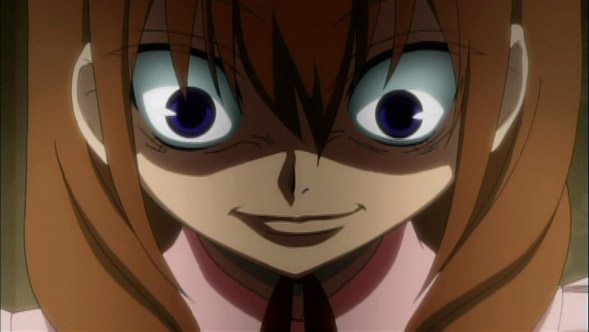 While crisp visuals and a properly used palette can make any anime look great, it takes exceptional character design and facial expressions to really sell the experience and thankfully, Umineko is no slouch in these areas. Each character within the series has a unique and memorable enough design which is essential given the number of characters Umineko has and their faces are animated in such a way that a wide-range of emotions can be displayed easily and with great effect on the viewer. It is also worth noting that this release is uncensored, which means that even some of the most gruesome death scenes are not blurred out.

Audio:
It is worth noting that NIS America’s release of Umineko: When They Cry does not have an English dub and only features English subtitles alongside the original Japanese voice track. This is standard with any NIS America anime release however and thankfully the Japanese voice actors have managed to perform the voices of most of the cast exceptionally well. 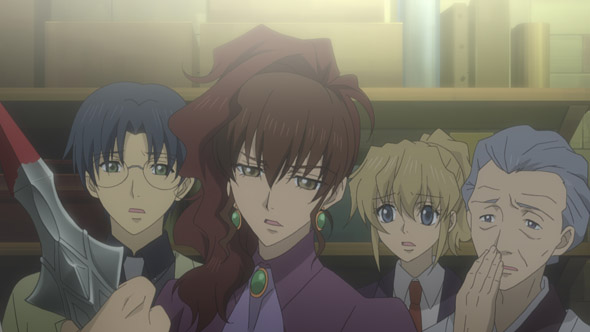 Each voice actor/actress has a number of emotional scenes, often involving either borderline insanity, crushing despair or panicked desperation and the cast manages to really drive home these emotionally charged lines. As far as background music goes, Umineko contains a fitting set of background songs that fit the current mood displayed on screen, with a number of exceptionally well placed songs used throughout the series. As far as the opening and ending goes, there is only one opening and ending theme used throughout all twenty-six episodes of the series, with “One-Winged Bird” by Akiko Shikata used as a fitting opening while “The Divine Tragedy: Magic Melody” by Jimang offers an excellent closing theme to this twisted series.

Extras:
As per standard with an NIS America “Premium Edition” release, both Volumes 1 and 2 of Umineko: When They Cry come in gorgeous oversized chip-board slipcases which feature a glossy image of Battler and Beatrice on Volume 1 and Jessica, Kanon and Beatrice on Volume 2. Inside of these slipcases there is a special hardcover art book packed full of detail that is borderline essential. More on that in a moment. As far as on-disc extras go, there is only a clean version of the opening and ending theme and trailers for other NIS America products. 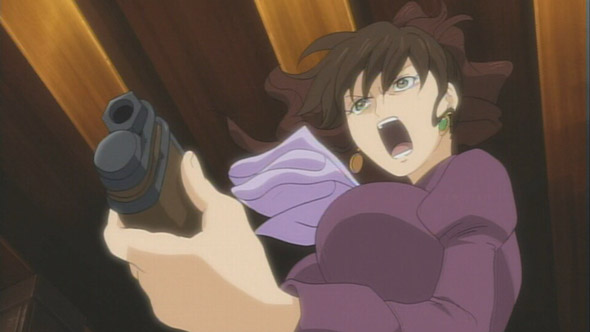 Now about those hardcover art books, or “Case File”s as they are called. Both Volume 1 & Volume 2’s art books contain character sketches as well as extra information for each character presented within the series and most importantly, extra explanation for some of the events within each episode of the show. The details found in the art books never step into spoiler territory, but instead offer explore the events in a different way, making them something that some intuitive viewers may read through as an episode’s events unfold. It is also worth noting that Volume 2’s art book contains a breakdown of the character’s connections to one another and also ten pages of fully-colored art work (two of which are re-used from the slip-case with more detail).

Overall:
Umineko: When They Cry combines complex situations and physiological puzzles with suspenseful horror in what could have been an outstanding anime. What with its excellent production values and impressive voice work, the series has a lot going for it. Unfortunately that potential is squandered thanks to horrible execution and plot development. While NIS America’s impressive bonuses for the set do create a great collector’s item, the amount of plot holes, poor explanations and unsatisfying ending will leave many viewers disappointed as they think of what could have been.