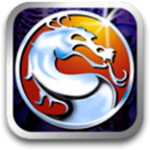 In 1995, the hit, gory and controversial fighting franchise Mortal Kombat launched the third title in the series: Mortal Kombat 3 for arcades and home console, and was one of my personal favourite games for the Super Nintendo as a kid. It introduced countless of new features, among which were the new Animality finishing moves, and still to this date is one of the darkest titles in the series. Within the same year though, an updated version of the game was released-Ultimate Mortal Kombat 3. It took out the Animalities  and replaced them with the new Brutalities, as well as taking out the character Sheva and adding in some of the classic characters from the series that were missing, such as Scorpion and Melieena. Now over ten years later, the game is ported to the iPhone, or at least it claims it has. Warning to Mortal Kombat fans: this game is MUCH different to the original. The original had 25 characters, this one has 9 with 2 unlockables. The digitised graphics have been replaced with 3D models, and the character selection is very different. Brutalities are missing too, and replaced with Animalities. However the gameplay and presentation has been basicly untouched and if you consider this title as a stand alone one rather than a port or an update its pretty damn good. In fact, you’d be surprised at just how much fun you’d have with this game, as it truely is a delight to play. 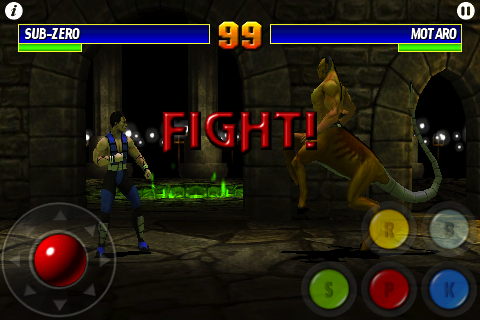 Fight?! What else am I going to do dressed like this?

If you’ve played the original MK3 or UMK3 you know what to expect. It’s dark and gritty, it has an almost creepy feel as you move through menus and such. It’s refreshing to see in the fighting genre as now days its all anime dudes with bright colours and big flashy words, so its nice for something a little more in the opposite direction. The blood and gore is admittedly toned down a litttle bit from the original, but not by much. Unfortunately there is only 9 characters to choose from, but there is an additional 2 unlockable fighters and 2 unplayable bosses which sort of helps.  Modes available include the standard arcade mode with a ‘choose your destiny’ difficulty select, with the added bonus of being able to save between fights, which is a really handy thing to have. On top of this is a very solid local multiplayer that works really well, survival mode and a pretty cool mode called Shou Karnage which is alot of fun to play. On top of that there are bios, stats, options multiple control schemes, leader boards and achievements, so this game is alot more than simply just ‘Round One…FIGHT!’ 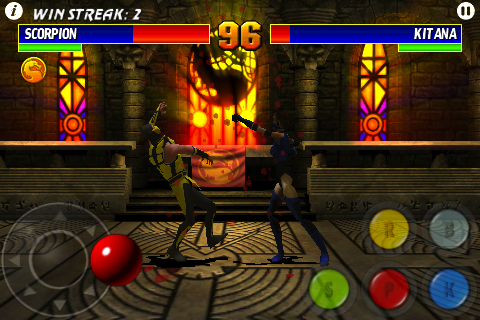 Scorpion learns that “Get over here!” is not an effective pick up line.

Ultimate Mortal Kombat 3’s controls feel pretty much identical to the original, which had it’s controls tight to begin with, which is always a make or break point for a fighting game. What’s really handy is the variety in the button layout. The standard iPhone-exclusive one will definitely be loved by some and hated by others,personally I found it a great addition. It’s a simplified, 5-button system. One punch button, one kick,  block, run and a special button that preforms special abilities. This is great for the iPhone as it makes things easier and being on such a small screen it really helps the game become more enjoyable, especially for a casual gamer. It also makes preforming fatalities easier as well, which blood-thirsty gore fans will love! For the hardcore MK fans however, there is the option to have the original 6-button layout, with high and low punch, high and low kick buttons, run and a block. There is also option of customising your own layout which helps too, so it really should satisfy all kinds of players. The control stick works well and is really responsive, although sometimes on a rare occasion you player may jump upward instead of a particular direction, but it never really ruins the game. The combo system though isn’t very deep and at times can feel a little too simple. 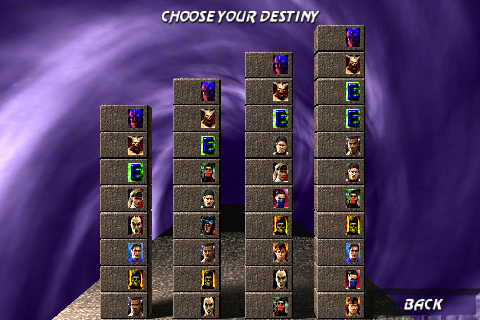 As you can see by the tournament schedule, the Mortal Kombat Tournament isn’t technically really a tournament. There are no brackets and the same guys are always in the finals and semi-finals. So how exactly is this death match organised? No one knows.

The selection of Mortal Kombat fighters is an interesting one, especially with the inclusion of Sheva who wasn’t even in the original Ultimate Mortal Kombat to begin with. However, the mix of characters actually complement each other well, and for the most part it actually feels like its evened out pretty well, unlike the original Mortal Kombat 3 with characters like Sektor being able to preform some pretty unfair (but fun) moves. The selection ranges from fighters who are better in close range combat and some who are better off with specials fighting from a distance, so gameplay doesn’t get repetitive as your strategies will probably change for each character. Not having the ‘toastys’ here are disappointing, but don’t ruin the game, and keeping of the ability to knock opponents into other levels still remains and still are alot of fun to do. Shou Khan and Motaro are also still very unfairly hard in all difficulty levels, but its not so bad it ruins the game. 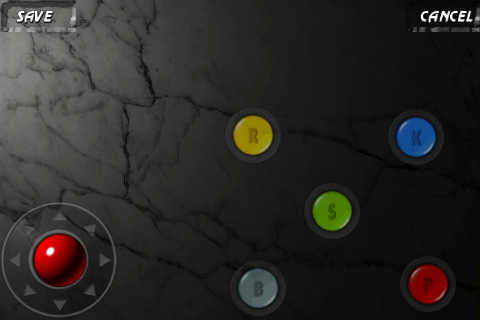 Here you can design your own button layout, and you can create some really silly, hard to use ones for the lolz. It’s also handy and nice to have such a customisable button layout for the hardcore gamers.

There are a few other modes other than arcade mode however which also enjoyable. Survival mode rears its head into the iPhone port and is a real challenge involving the player fighting fighter after fighter with no replenishing of his/her health bar. Shou Karnage is always a blast to play with gamers fighting the final boss Shou Khan both with unlimited  health. The aim of the game is to rack up as many points as you can before the timer is up, and is alot of fun. There is also a local multiplayer option, where if you find someone with the game and you both have a strong wifi signal you can go head to head. The blood is ever so much sweeter when its someone you know, and is a really rewarding experience. 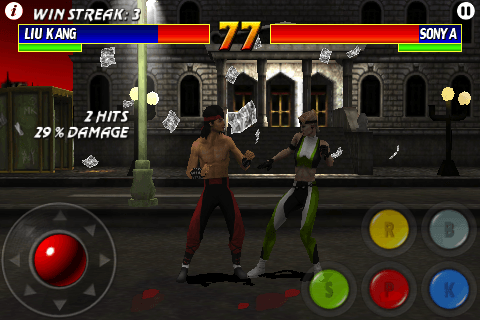 Sadly, the blood isn’t as common in this port and it doesn’t even look that great either. Character models and stages look good though!

The graphics for this port are interesting to say the least. As it’s not digitised actors like the original, they have all been replaced with 3D models. Fear not however, as they all still control and feel the same, they even look and move the same, just the fighters and stages have gone graphical update. Why this was decided is a mystery to everyone it seems. It does seem a bit like an unnecessary update as the old graphics didn’t really need to be improved on at all, however its still nice to see the developer put in the effort to attempt to update the game as some developers do get lazy when it comes to ports like this. It seems to have either crossed or blurred the line between what separates a port from being an update or a completely seperate game with this new graphical style, modes and different character selection. It’s almost as if its a separate game with the same name rather than a port. Regardless, the models look great on the iPhone and are still superb and look rather impressive. There are some small things in menus that actually look better than the original, so its nice to see things like that too. The audio appears to be untouched from the original, which isn’t an issue. Many tunes have a creepy dark vibe to them while others really get you into it. There are a few memorable tracks here that are pretty catchy and really get you into the fighting spirt. Like all games in the Mortal Kombat franchise, the sound effects are epic. The evil demonic voice saying ‘Choose your destiny’ and ‘Finnish him!’ are always a pleasure to hear, and at some point you will laugh at Lu Kang’s Bruce Lee yells and you will shout the classic ‘Get over here!’ with Scorpion everytime you preform his memorable harpoon technique. 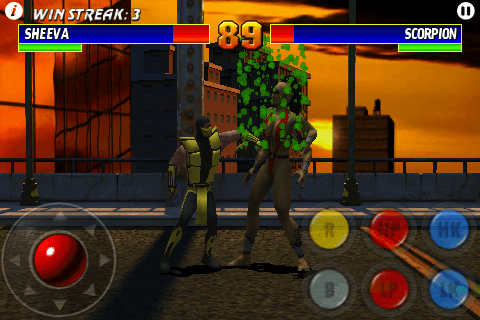 Ultimate Mortal Kombat 3 is a must have for all Mortal Kombat fans and all fans of the fighting genre. The controls are decent, the fighters are well balanced with multiple fatalities, the graphics look sweet, the sound effects are awesome, the soundtrack is good, there are multiple modes and it has a solid local multiplayer. In short, its just a really great game and is alot of fun. A delight to play and very easy to recommend to fighting fans. 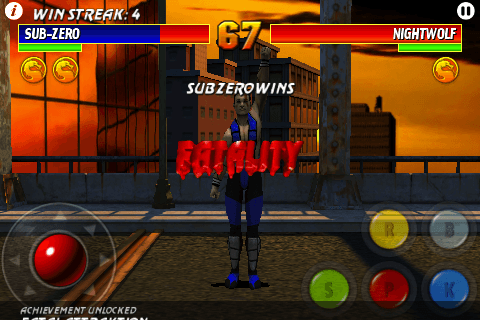 The amount of Fatalities, Stage Fatalities, Animalities, Babatalities and Friendships are impressive for each character, and adds a nice extra layer of depth to Ultimate Mortal Kombat 3, and let’s face it-it’s pretty much the main reason why we all love MK so much!

I give Ultimate Mortal Kombat 3 for the iPhone: