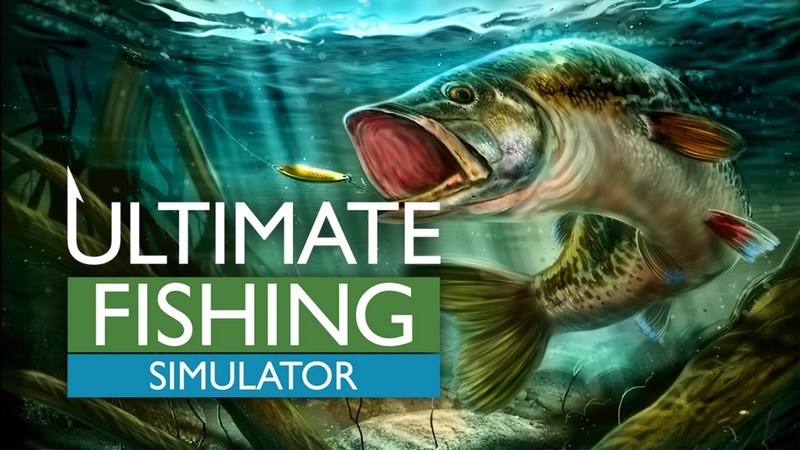 Before we start, something to brag about: I have finally finished the Liege of the Lake sidequest in Final Fantasy XV! It took me a few hours, some broken lines and lures but I did it. And that got me thinking…over many & many years, I have played all sorts of games where fishing is a side activity. Warframe, Final Fantasy XV, Fable, NieR: Automata and plenty of others. Yet, I ‘ve never played anything where fishing is the gist of it all. The whole game. So when I got a chance to check out Ultimate Fishing Simulator, I figured “why not”. I just caught the monster of a fish in Final Fantasy XV so taking this on should be a piece of cake.

Heh, a good one. A story in a fishing game. In any case, there certainly isn’t any there. You have a classic tutorial and tips telling you how to prepare, how to fish, what lures to you and so on. Nothing too difficult to comprehend although certain tips and hints are hidden all over the equipment tabs and options so it’s important to check everything in order to fully understand what is what. 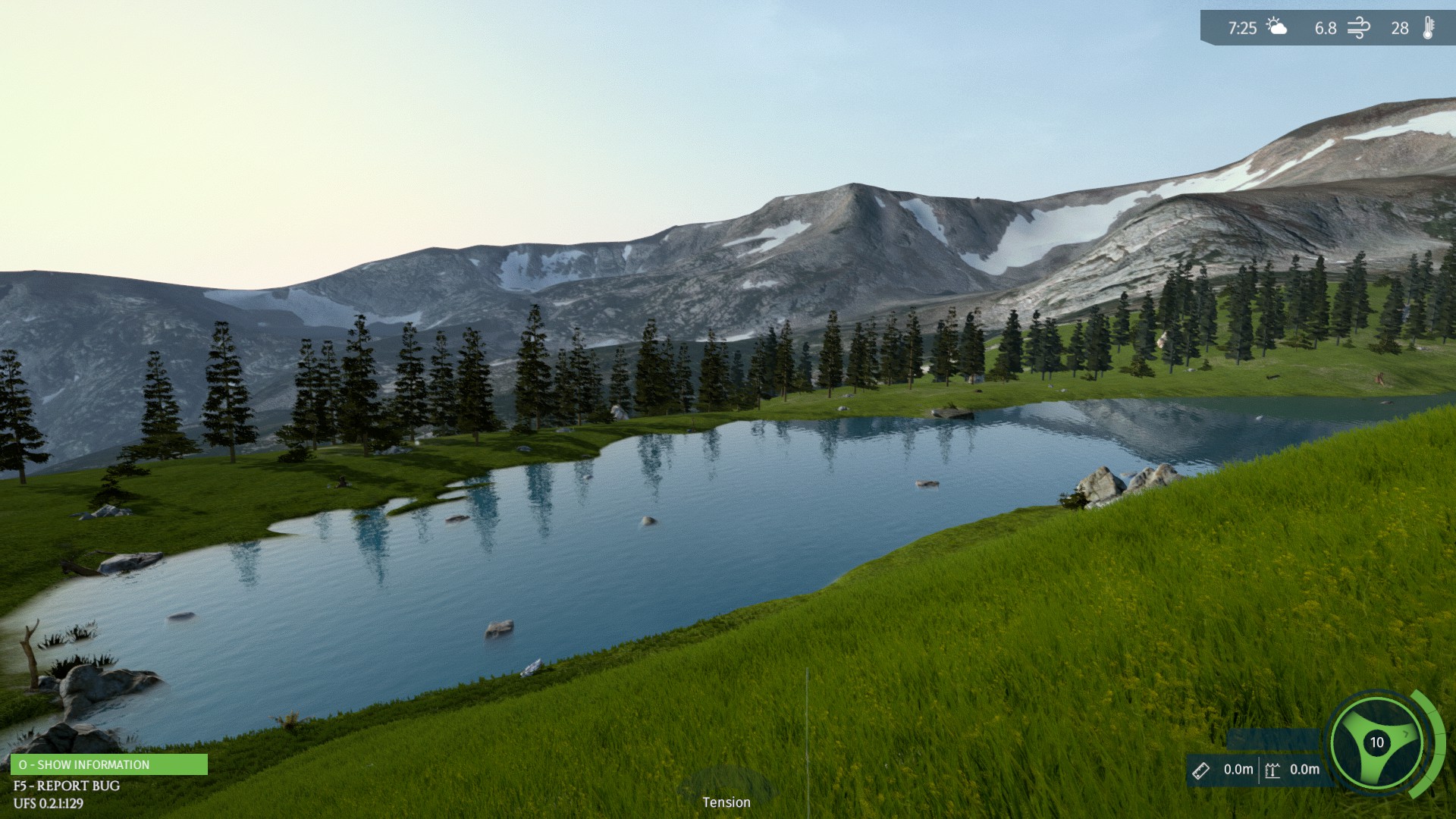 After creating a profile, the game welcomes you with a choice of normal and realistic difficulty. The latter one is a bit gimped and a lot of hints and help mechanics are disabled in order to get a more (you guessed it) realistic experience. I wasn’t feeling quite ready for that one, so normal one was for me. You have plenty of options at your disposal on how to fish – where to start, what gadgets to use and you can even have your own boat later. Unfortunately, most of these are exp locked so you will have to grind a bit in order to get the most of the fishing experience. My first (and only one I could pick at the moment) starting location was a small lake. Since some fish only come out a night, you can tinker with speeding up time if you’re in the mood for some night fishing. Anyway, the whole process and mechanics of fishing are………not that bad, actually. Every time I’d stumble upon screenshots of some fishing sim, it would look like I’m watching some MMO with loads of options and hints and notifications on screen at the same time. Ultimate Fishing Simulator doesn’t have that issue. It’s catered to experienced players and newbies (hey, that’s me!) as well. After throwing a lure in the lake, it didn’t take long for my first fishie to bite. Reeling in is not complicated, as long as you don’t tug too much. After catching yourself one, you have a choice of selling it on the spot or releasing back. Selling it gives you money (doh!) which is necessary to buy new lures and equipment and releasing it gives you experience. That one is also important if you want to get access to new locations and whatnot. 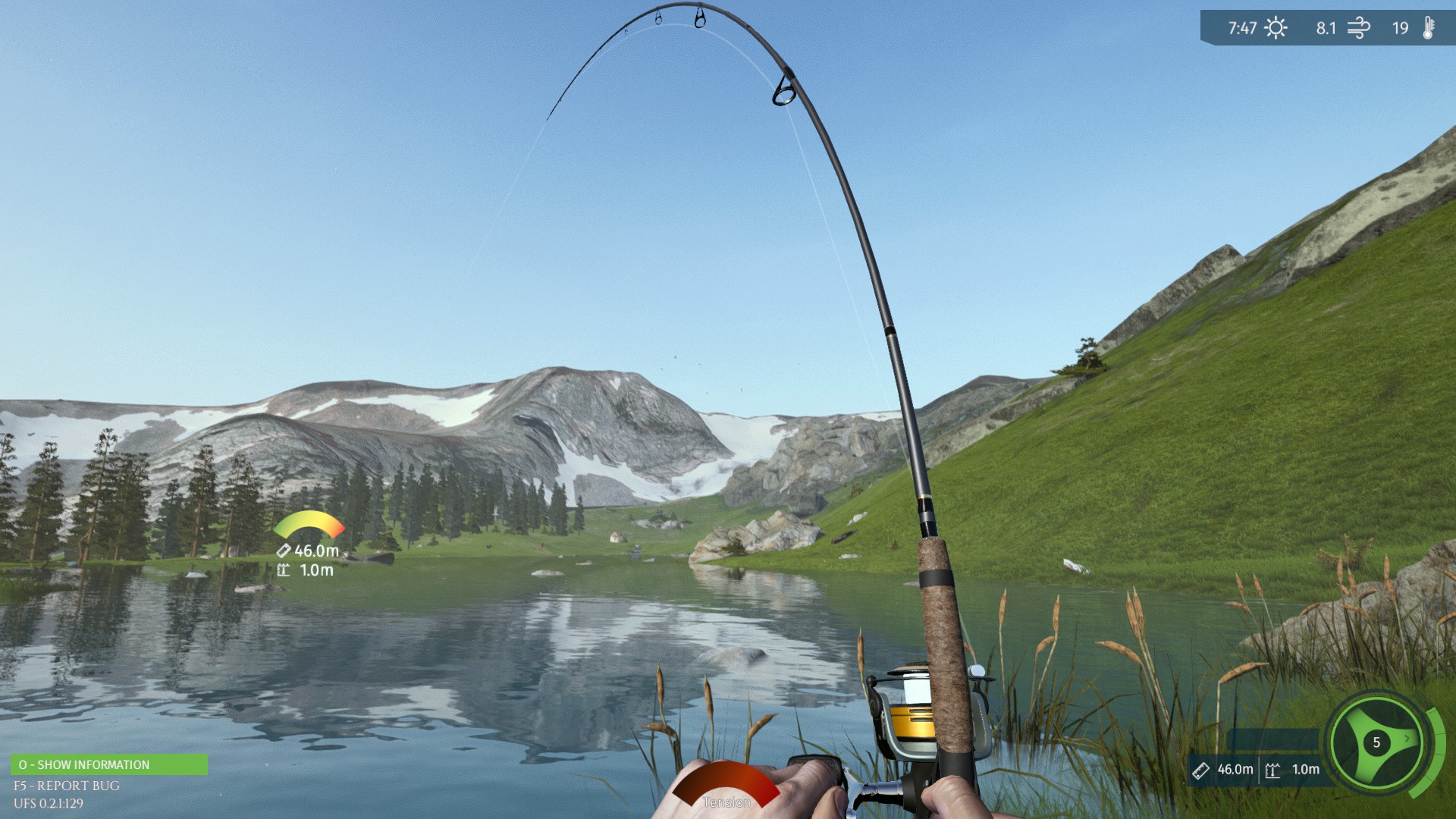 As it turns out, the game got out of Early Access recently and it certainly shows. There are some remnants of Early Access like the rather basic user interface and menu screens, feels like something that was cobbled up from Unity store. The good news is that subpar UI won’t bother you much since the rest of the game visuals are rather good. Not amazing, but way better than expected. There are plenty of details around you as you fish (so you wouldn’t feel alone much) like wind blowing dandelion seeds and fishes swimming around. They’re usually everywhere else except where you just threw the lure, just to rub it in for you…….Night scenes look great too and despite the fair warning on the store page to pay attention to system requirements, the game runs pretty well and without any hitches. 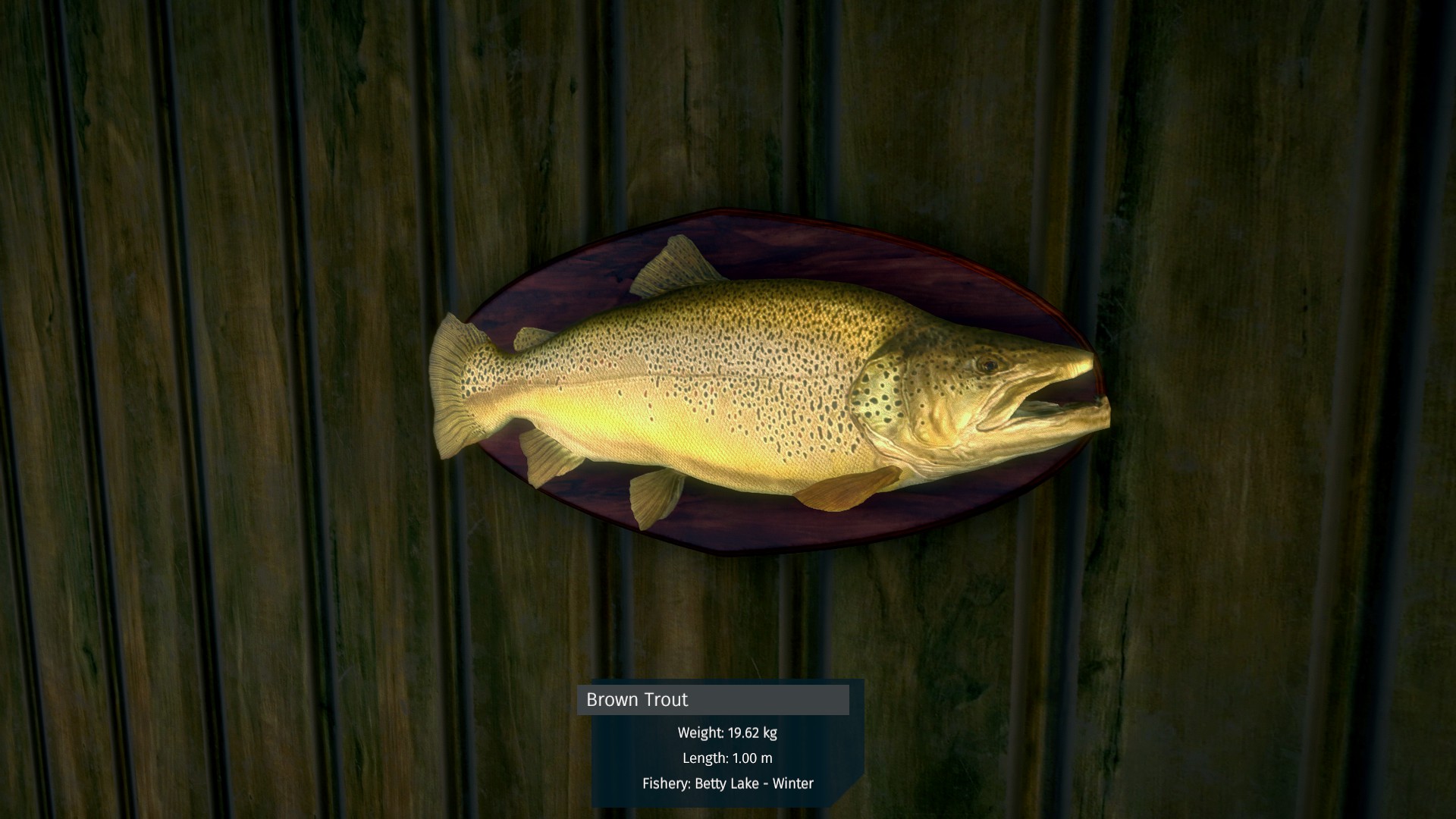 I’d say at first that any sort of music or a soundtrack is nonexistent by default and I’d be right but wait!……there is a catch. Ultimate Fishing Simulator gives you the option of tuning into one of many internet radios to keep you company while you fish. That feature alone raised the grade of the game quite a bit. Simple, yet effective. Of course, there are some expected audio bits like wind blowing or lake/sea noises so the game isn’t completely mute. Either way, fishing to heavy metal never felt so good…and weird as hell. 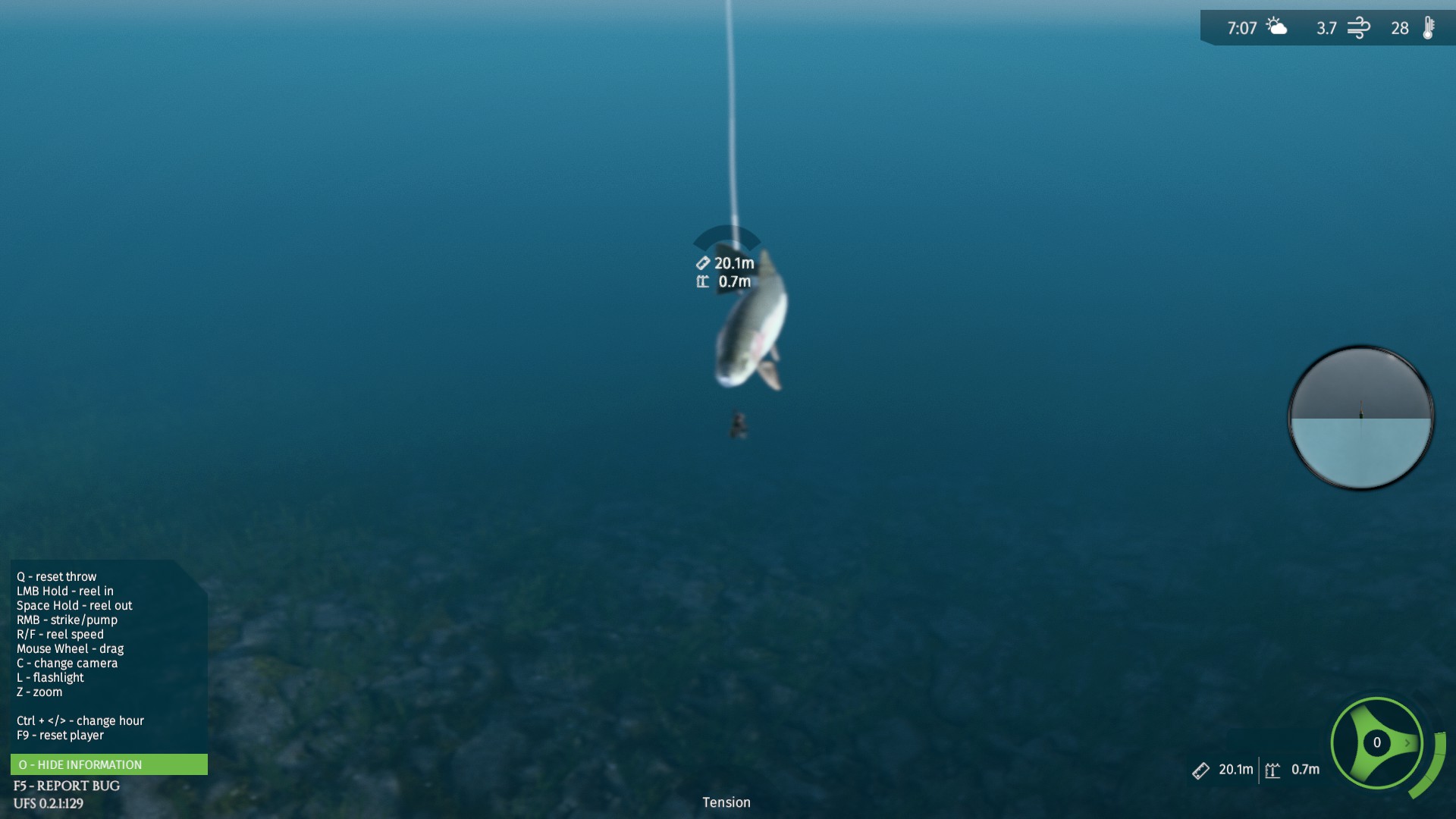 What can I say, my first run-in with a fully fledged fishing game went better than expected. Ultimate Fishing Simulator is surprisingly fun with plenty of ways to spice up your gameplay, yet it never feels needlessly complicated. I still think that the UI could use a good rework but the most important elements here (gameplay and atmosphere) are spot on. If there is one game that should be your entry into the world of fishing sims, Ultimate Fishing Simulator is the perfect pick.

A well-made fishing sim, suitable for veterans and newcomers alike.
8