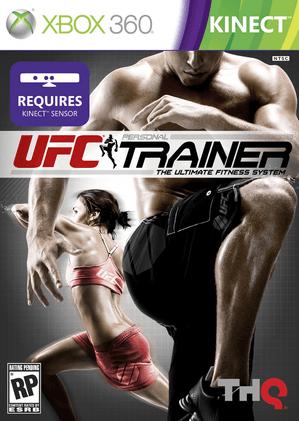 There have been a few exercise games that make use of the Kinect, some are rather subtle with their workout mechanic, being dancing games that contain a calorie counter that can appear in the corner. Other games aren’t subtle at all and are based only around a workout mechanic, meaning if you are buying the game you will be doing it to do more than entertain yourself, but to get yourself a workout at the same time. UFC Personal Trainer: The Ultimate Fitness System is a title that has a largely followed brand name following. With many fans of the UFC possibly looking for an exercise that could put them through even the minimal amount of trials that a real UFC fighter would expect; does UFC Personal Trainer: The Ultimate Fitness System deliver the knockout uppercut? 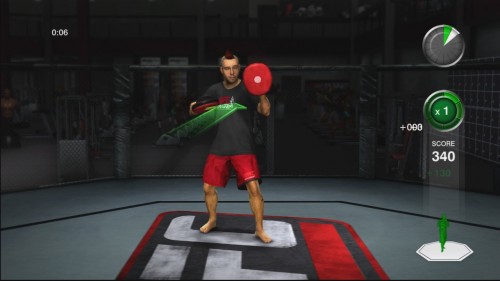 Being as a workout focused title has zero storyline whatsoever, lets jump into the what we will be seeing when we play the game. The menu and user interface is very well organized an clean, which makes using the Kinect sensor to select workout options a plus. There are a decent amount of video tutorials as well which fans will enjoy and those working out will especially appreciate.

Unfortunately once you actually get past the menu into the game, there isn’t a whole lot to be seen. The background visuals are disappointing and barren. This can be excused slightly because players are supposed to be feeling like they are working out in a gym. UFC fighters come from every corner of the globe and it would have been nice to see some more variety in backgrounds, even if it means training outside.

The trainers themselves are decent enough. They are modeled after some of the most famous fighters today. Unfortunately the trainers themselves appear to be robots simply because their facial animations during your workout are minimalistic at best and their animations are always the same which means you will often see the same repeating animation countless times. Now the appearance of a workout title may not be one of the biggest things some would look for, but it is also something that would help keep the user’s mind off of the fact they are working out. 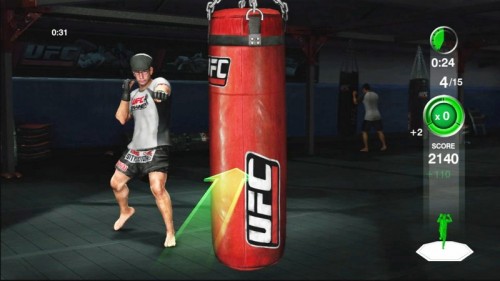 Now as I just mentioned pertaining to the graphical aspect, the sound of a workout game, especially one containing virtual coaches is crucial. However this is another shortcoming when you come into playing UFC Personal Trainer. During your workout the coach you picked will often give you little words of advice, encouragement, etc… However there is a significant problem with this mechanic.

That is the fact that the trainers you work with sound as realistic as robots because they will often repeat the same exact phrase over and over again. There is very little script to work with, which means that during long exercise sessions you will be so tired of hearing the same exact phrases time and time again, especially when it is repeated five times in two minutes.

Also at times the phrases that they speak don’t even match what you are doing at the time. For example, once during a workout I grew tired and paused my movements temporarily and rather than my trainer mentioning anything about my lack of movement he said I was doing a great job. Then another time when I was actually doing a great job with my programmed workout I was told that I could do better. This isn’t the way to motivate those that just spent a lot of time pushing my body to where I was exhaustion and having to stop. The audio is truly a disappointing feature in a game that says it is an “Ultimate Fitness System.” 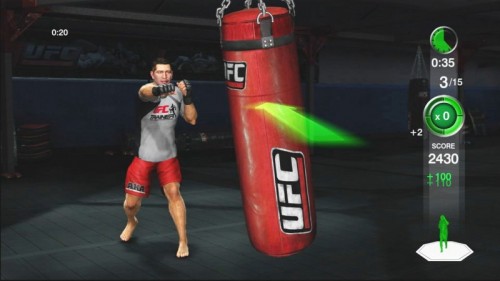 UFC Personal Trainer The Ultimate Fitness System features over seventy different exercises and provides pre-set workout routines as well as customizable routines for those who want to either target specific areas of the body or simply want to have more control over their workout. Players can also choose to enter a 30 day or a 60 day workout program if they are feeling up to the challenge.
Something that UFC Personal Trainer has going for it is that it has been officially recognized by the National Academy of Sports Medicine (NASM) which means that the workouts you will be performing are at least somewhat effective. And they most certainly are a tiring experience.

The workouts in UFC Personal Trainer are can be very intense and can drain your energy quite quickly. Every one of the pre-made workouts begins with a warm-up and a cool-down session. The workouts will quickly help anyone build up a sweat, and the highlight of the UFC Personal Trainer is the fact that a lot of your workout will be various punching and kicking as well as your standard stretching and motions you would perform in other titles. This means you will have plenty of fun while also sweating like a dog that has been left outside all day in the sun.
There is a small problem with UFC Personal Trainer and that is there isn’t much to tell you if you are doing something incorrect. Your trainer does not say anything if you are doing something out of form or are doing something dangerous, which means it would be best to take everything slow at first before you become comfortable with the exercises to prevent any bodily injury to yourself. Now knocking out your brother as he walks in front of the television with a knee is another problem entirely. 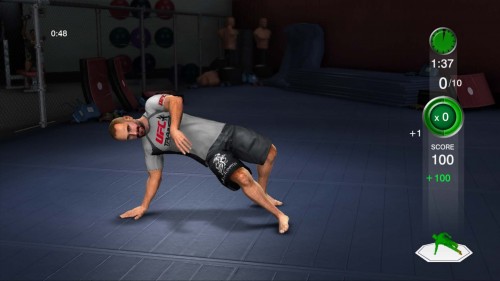 The Kinect sensor actually does a rather adequate job of picking up your motions. All upper body and leg exercises including kicks and lunges and everything in between are sensed well enough by the sensor. Something that the Kinect sensor does have a problem with however is the ground focused exercises. This can be anything from sit ups to push-ups with the Kinect failing to recognize how many you may have actually completed and telling you a smaller number which can be disappointing for those who set to only do the amount they listed.

In the end UFC: Personal Trainer will most likely be one of the most fun and enjoyable workout experiences you can ask for due to the fact that it will be something most fans of the UFC will enjoy. There is a lot of different exercises to choose from, though having any knowledge of the UFC or MMA at all isn’t going to be required, which means anyone who wants a good workout can jump in and exercise. Despite having disappointing visuals and poor audio feedback, UFC Personal Trainer has the potential to be a great workout tool and experience.

I give UFC Personal Trainer: The Ultimate Fitness System