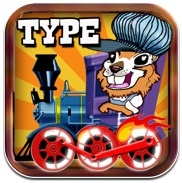 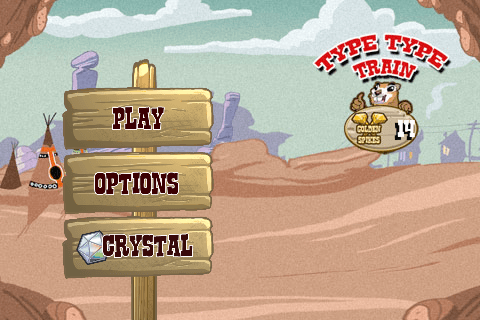 Type Type Train is exactly what it sounds like, it has trains, and it has typing. Wait a minute. Take a step back and double the amount of typing! As the trains with words on them progress along the track, you need to type the words as quick as you can to blow the trains up. This happens for two reasons; firstly, the little prairie dogs that live in the desert need help getting rid of the trains! Secondly, to finish the level and progress to the new one, earning cool bonuses along the way. 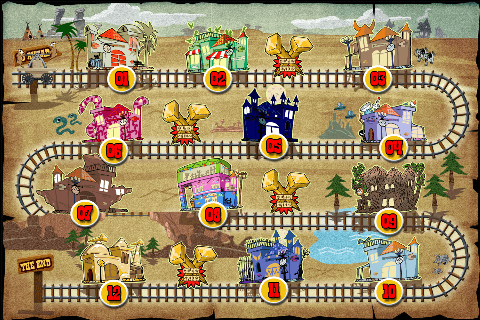 As I said, the basic premise of the game is to type. Personally I find the whole typing process on the iDevice screen a little difficult because there isn’t an actual button to hit, just a sensor on a flat screen. As the trains come past on the screen, the goal is to type the words that appear on the trains before time runs out. The time is measured on a little red bar to the bottom left of the screen. On some of the harder levels the timer moves way too quickly and it makes it really really difficult to type in such a panic as the screen flashes red! Due to the difficulty, I have mostly just stuck to the easier levels, but have found myself branching off into the most difficult set of levels purely because you are able to earn more bonuses.

There are three sets of difficulty in Type Type Train, easy, normal and insane. Within these three difficulty settings there are twelve levels. Each of the levels are the same at least in terms of appearance, the only difference is that the insane levels are truthfully rather insane. Way too many trains appear at one time and the timer moves so fast it is really difficult to keep up. Thankfully there are a few tricks you can pick up along the track to help you through the difficult task of destroying trains! 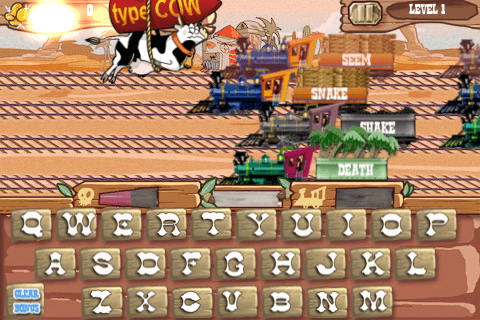 Throughout the levels there are bonus levels where you earn golden spikes. These levels have ten trains to blow up, which grants a certain number of spikes if you complete it on different levels. The easier levels get you one spike per bonus completion and the insane levels get you three per bonus. After collecting five spikes, you are granted a new bonus to help in the game. The majority of these are pretty helpful, ranging from different types of animals who set off bombs, such as chickens or cows strapped to rockets, to the ability to stop time or set off bombs instantaneously. The first mentioned set of bonuses are randomly generated, they appear on the screen and are activated with key words that need to be typed such as “eggs” or “corn”. The second set of bonuses are called weapons, and are set off by pressing a button near the keyboard. At first you can only use one weapon, but after collecting thirty spikes you are given a keyboard upgrade and can use two. These are pretty entertaining in short bursts, and do add to the playability of the game by making it a little more interesting and less difficult. Overall these elements don’t take away from the game itself, which is primarily just a typing game. 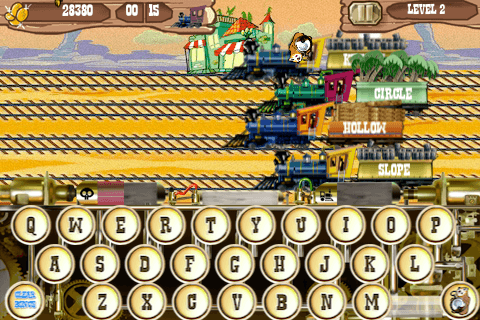 The graphics for Type Type Train are a little disappointing. The characters are a little off model in design at times during loading screens and level select. However, during the game all the elements work together and have their place. The whole western meets train theme is sound and presented coherently. My favourite design element is in fact the upgraded keyboard. The first one is just some square bits of wood and it was a little disappointing. After reaching the thirty golden spikes my keyboard was upgraded to an old western looking typewriter that looked as if it had been invented by Dr. Emmet Brown in Back to the Future part 3. For me, this is a nice little nostalgic bridge between steam train technology and the modern technology of the smart phone. Unfortunately the audio didn’t have a real hook for me. Like most games for the iPhone the sound design is fine and suits the game thematically and contextually, but doesn’t really have any nice little touches. 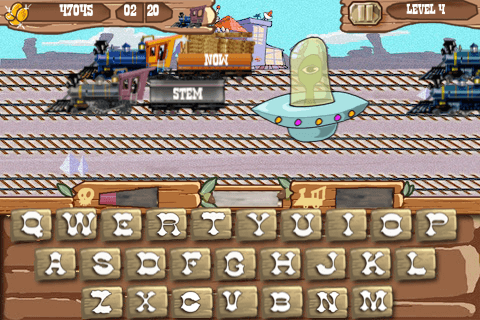 It is an odd decision to make a typing game for iOS. The interface of the different iDevices doesn’t really support something that requires so much precision and often takes away from the game. Type Type Train isn’t a bad game, it perhaps just isn’t suited to this platform. Ideally, Type Type Train would work best as a PC game, or at least benefit from a keyboard input and would be best presented as a spelling game for kids, or even just a touch-typing game. It has some good qualities for educational purposes but as a source of entertainment it is a bit lacking.