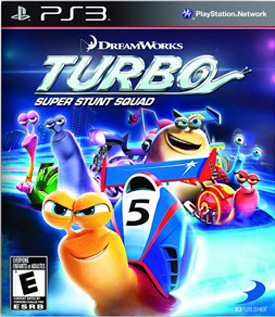 Licensed games are always to be approached with caution in this day and age, especially for movie tie-ins. Sadly, Turbo: Super Stunt Squad doesn’t do a very good job of breaking any of the stigmas and stereotypes associated with tie-in games, and in fact actually emphasises them. Slow and sluggish controls, visuals and menus that look like they were ripped from a PS1 game, all coupled with an odd choice of game genre make Turbo a hard sell, even for die hard fans. 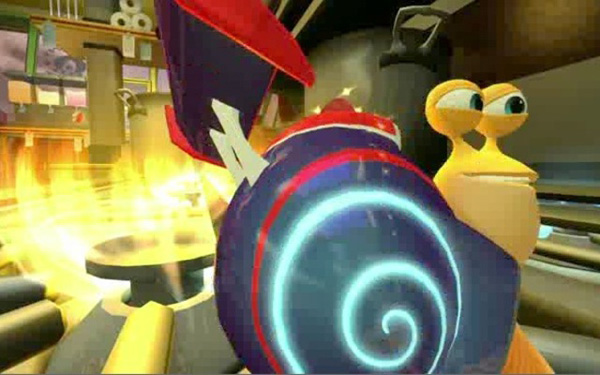 Turbo (the film) is about a snail who’s dream is to be a racer. Through the course of the movie he gets his wish granted and before long he is speeding around racetracks like you wouldn’t believe. It would have made sense for the developers to make a racing game based on this concept, but instead they oddly chose to avoid what was expected and instead offer up a Tony Hawk inspired offering, where the snails are doing jumps, flips, grinds and other tricks through several different stages.

The game is broken up into different stages, each reminiscent of locations and settings from the film. These stages are set up much like many trick-game stages, with convenient ramps, grind-rails and jumps scattered around the place. As you play through the levels, you will be given objective to meet and obstacles to clear, which in return earns you unlocks. These unlocks come in the form of more characters to play as, and more stages to trick your way through.

The stage layout is actually quite nice for a game like this, with many of the stages being very vertical in nature. The tricks spots and ramps are well spaced out and give you a lot of room to move. Some problems to arise from the verticality of levels however, as a simple mistake at the wrong point higher up can cause you to plummet back down to the beginning, forcing you to climb all the way to the top once again and in many cases completely costing you any objectives you might have completed. 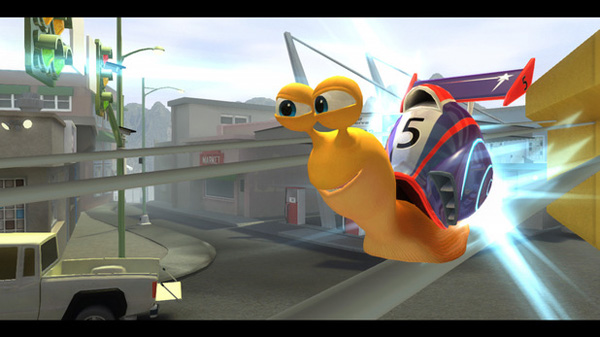 There are a bunch of different snails to choose from, and are differentiated by their characteristics such as Speed, Agility etc. The problem is that there is hardly any noticeable difference when actually playing. For me anyway, they all handled almost identically with the exception for their unique special moves.

I mentally debated myself back and forth whether or not I would mention this part, but Turbo plays really slowly. All of the characters feel like they are taking forever to get from point A to point B. Even when in the air doing tricks or other maneuvers, they feel like they are just lagging along. It is hard to say if this was intentional because they are snails, or if it is just a mistake, but in a game like this, the speed and agility is really required to get any enjoyment. Aside from normal movement speed, the way that Turbo and his pals execute tricks is equally as tedious and slow. It takes a lot of enjoyment out of games when they are moving at a (pun intended) snail’s pace.

The tutorial segment, which introduces you to the ways and means of controlling your snails is also incredibly drawn out and slow, with many of the instructions not clearly presented to you. It is a small thing, but since this game is targeted towards a younger audience, things like this can quickly spiral into being game breakers. 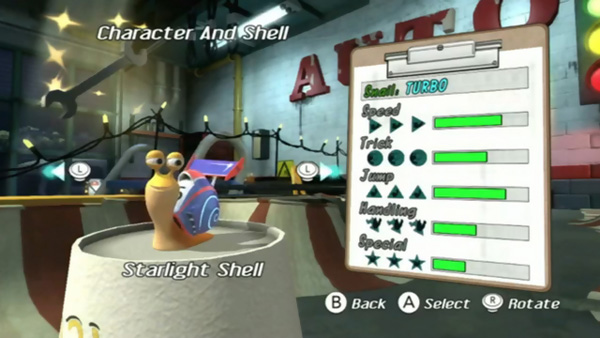 As soon as I loaded up Turbo, I thought that I must have accidentally put in a PS1 disc. The font on the screen was almost identical to that from the 1990s, even including the blur and pixellation. The on-screen text actually began to hurt my eyes after looking at it for a short time. Aside from it being almost painful to look at, there is not much to the game’s presentation. 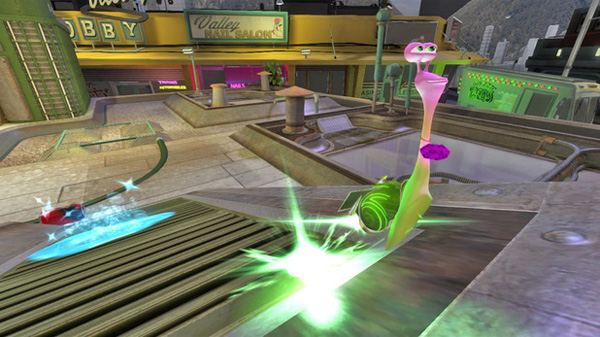 The levels as I mentioned above are designed nicely, but their overall appearance leaves a lot to be desired. A lot of the textures used in the game are out-dated, and are not of a high quality. The same can’t be said for the snails though. The game’s characters; are all really well done. They all retain their characteristics and appearances from the film, as well as carrying over a lot of their charm and quirks. The snails really do pop and come to life on the screen, which is a double-edged sword as it makes the lack of detail and polish in the settings even more noticeable.

The audio suffers from many of the same problems as the visuals, with many of the music tracks sounding bland, dull and repetitive. However, much like the way the snails bring some life back to the game’s visuals, the voice acting does the same for the audio. The voice acting on the snails is actually quite impressive for a game such as this. While the characters don’t always sound like their movie counter-parts, it is sometimes so close that you will find yourself saying “wait, WAS that Samuel L. Jackson? Nahh It wasn’t.” 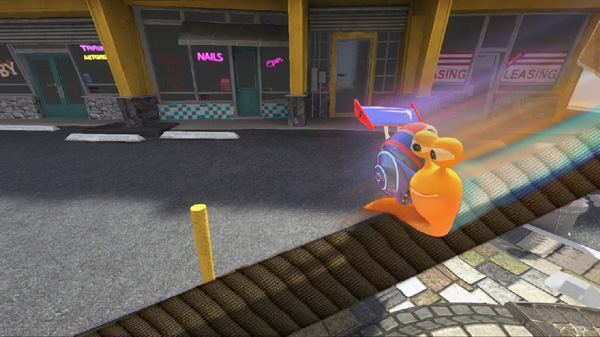 There is a definite air of caution among movie tie-in games, especially on the console scene. History of quickly made, cheap games being used to make that little bit more money have tarnished their reputation. Sadly, Turbo doesn’t do anything to rectify the wrongs of the world, and in fact just reinforces those stereotypes. It wouldn’t be fair to talk down on this game just for fitting in with its cohorts though, but it is the lack of polish and dare I say it; love that make this game stumble out of the blocks. Turbo feels like an out-dated, sluggish and unresponsive cash-in, with visuals ripped straight from the 90s. The charm of the snails and some rather impressive voice work save it from being a total disaster, but even with their charm there isn’t much to go on here. The game is definitely geared towards children, but with its problems, I think that even kids who are die-hard, obsessed fans of the film and its lovable band of misfits will be put off.