Trouserheart is a delightful little action/adventure game where you play as King Trouserheart after his prized leather trousers have been stolen. As the king you travel from stage to stage in an almost dungeon-crawler style, defeating enemies and collecting gold to better upgrade your equipment. The game is fun, colourful and often times frantic. The game suffers from some incredible lag issues and sometimes repetitive level design. This, combined with its $3 price tag may be enough to turn away some gamers, but for those who do pick it up, there is definitely a lot of enjoyment to be gotten out of this game – even if it is just the fact that you are playing as a burly, bearded barbarian type with no pants on. 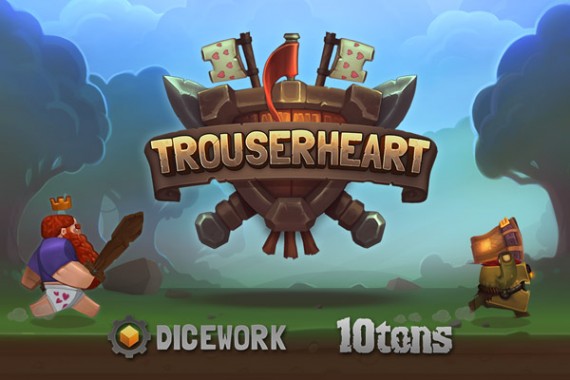 Trouserheart is a hack and slash adventure game for the iOS. The player is placed in the role of King Trouserheart, who one day has his most treasured possession stolen; his the majestic leather trousers. The game is broken up into small stages, and each of these stages is broken down to even smaller rooms.

The stages in Trouserheart are very linear, and each contain a handful of enemies for you to hack and slash your way through. Since the levels are completely linear, it feels a lot like a simple dungeon crawler as you progress through. In the middle of longer levels are campfire checkpoints that allow you to restore your health before progressing on and fighting the boss. Killing enemies grants you more gold, which can be redeemed back at your home for upgrades like better swords, shields and armor (but alas, no pants). 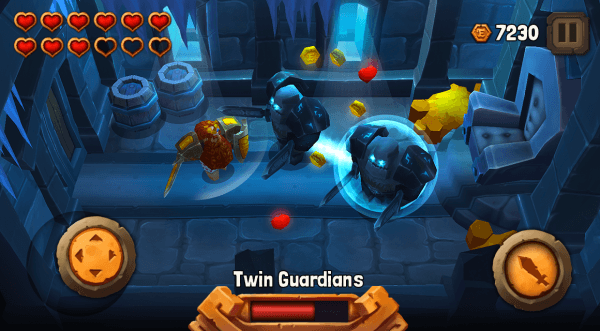 The game is controlled using an on-screen joystick and button. I know this is a massive no-no for a lot of gamers, but Trouserheart pulls it off surprisingly well; the game is very liberal with where you can keep your thumb, and as long as it is near the button/stick you will be fine.

The game isn’t overly difficult, and you will be able to blast through the entire first few worlds without running into any trouble. However, if you are looking for a bit more of a challenge, there is also a Hardcore Mode implemented into the game that has permanent death, forcing players to be a little more cautious as they play, or face the game over from its entirety.

While the game is fun, enjoyable and has an intuitive control scheme, it does suffer from a noticeable lag issue. Entering a new room, or having too many enemies on the screen at once will often cause the game to lock up for a few seconds, or at very least slow down to a crawl. The game is optimized for iPhone 5, but I was playing on a 4S so I can’t say for certain if this is just a case of it not being suited for the earlier devices or not. Regardless it was more than a little bit frustrating. 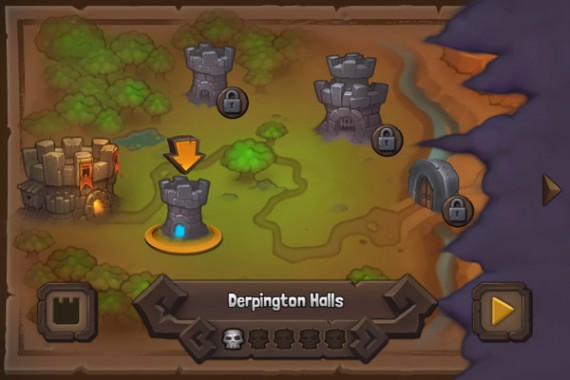 The visuals for Trouserheart are actually really enjoyable. King Trouserheart, all of the enemies and the game’s stages are all really bright and vibrant, and the ‘chunky’ art style makes everyone look like they were papercrafted cutouts that were folded together.

The level design is minimalistic; the stages themselves are short, and the rooms in each stage only allow you a few steps movement in any one direction before you have reached the end. This is good however, as it adds a sense of frantic-ness to the gameplay. If there is a real downside however is that there just isn’t much variety between the rooms or the stages, so you will find yourself walking past the same backdrops multiple times.

Sadly I kind of felt let down by the audio in Trouserheart. Not because it is inherently bad or anything like that, but there is simply not much there. Each character has their own unique sound effects, and the sound of a sword hitting an object is nice, but all in all it doesn’t really add anything to the experience. 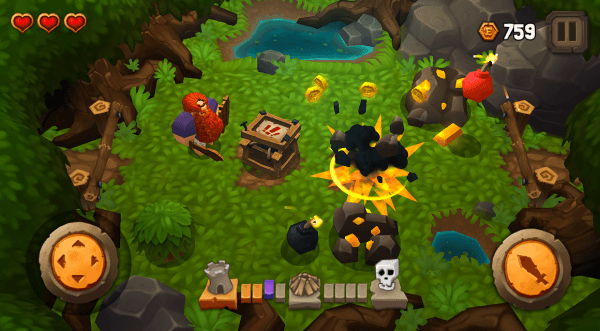 Trouserheart is a game that for all intents and purposes is incredibly fun. It is very casual in nature which allows players of any age or skill level to pick it up and have a go. There isn’t a whole lot of difficulty here, but with hardcore mode and the option on what skills to level up, you can make the game as hard as you want it to be.

The game will also offer iOS 7 Controller support in the coming weeks, so it will be interesting to see how it fares having the buttons mapped to an actual controller. At the moment though, as fun as the game is, it is let down by repetitive backdrops, and a serious lag issues.