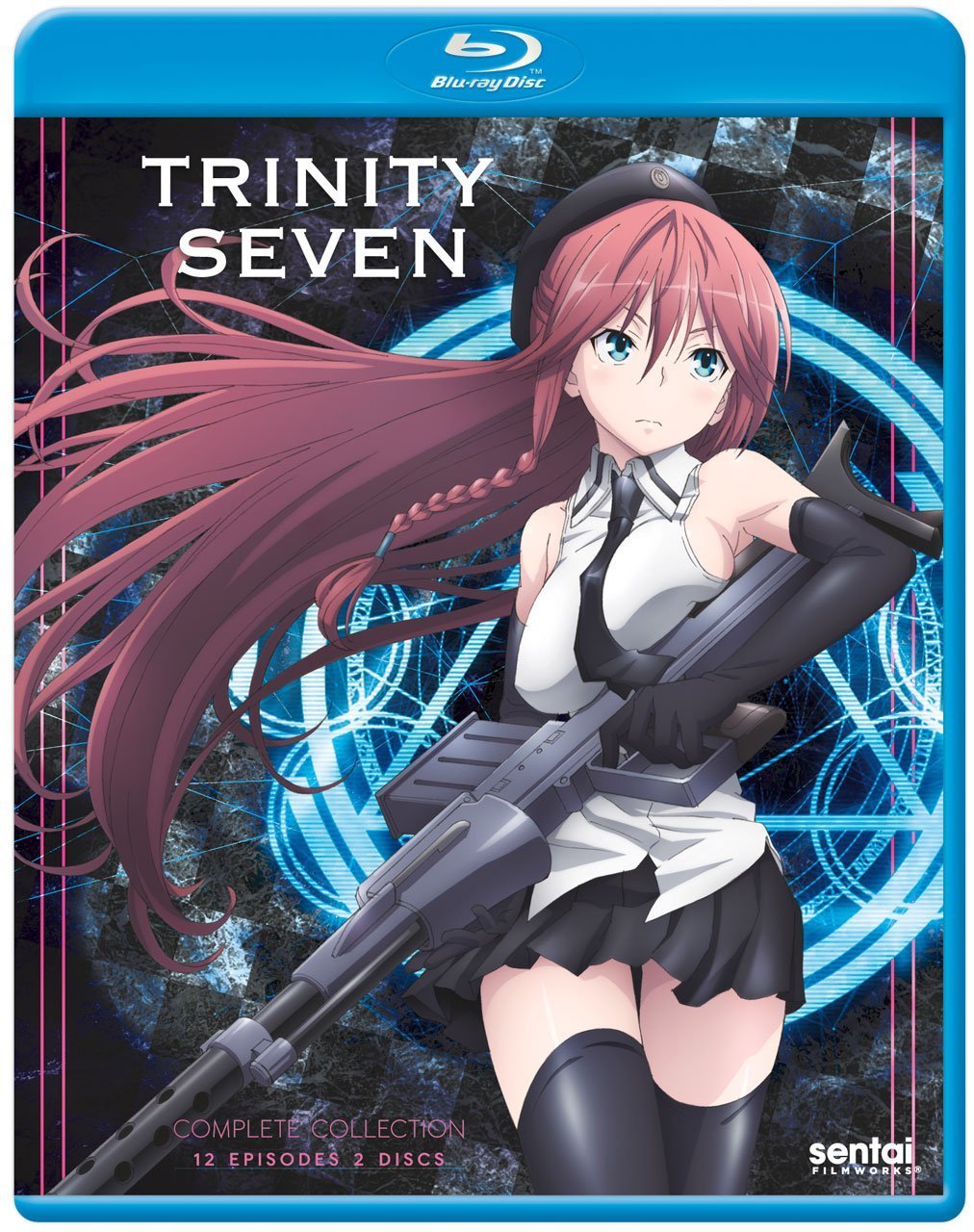 Harem anime come in many different shapes and sizes. There can be simplistic ones that take place in a basic high school where only a pair or trio of girls are going after the same guy and other times they can be incredibly complicated with numerous women vying for attention all while the world is exploding around them. This makes it a versatile series that is often placed in the middle of another genre to try and spice things up, so when the magic and fantasy based manga Trinity Seven was given an anime adaptation many were interested to see how it would turn out.  Now that the anime has been released in the West by Sentai Filmworks, is it worth your time?

After sleeping in a bit too late, Arata Kasuga is woken up by his beloved cousin Hijiri so that he isn’t late for class. This is a fairly standard day for Aruta as he heads outside and looks up at the sky and admires the black sun that is floating above the town. Though odd, he doesn’t act on it until a strange woman walks past him and orders him to wake up. Since everyone around him is calm though, he thinks nothing of it until Hijiri begins to act incredibly strange and when Arata confronts her, the truth comes out. 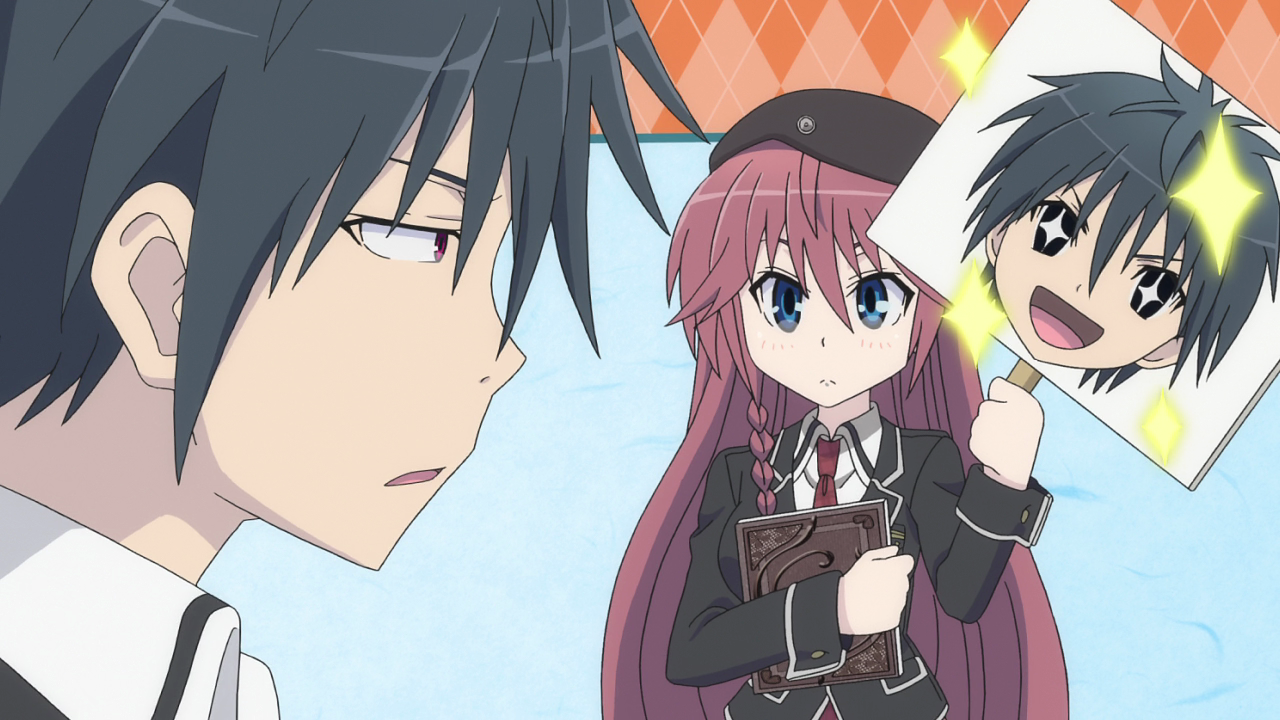 After tricking her, Hijiri reveals the world as it is, a fake illusion created by Arata after his magical abilities went out of control, causing something called a Breakdown Phenomenon and apparently killing everyone in the town. The only person who could help him was his cousin Hijiri who gave him a small book and told it to protect Arata. He is informed by the same red-haired woman that appeared before, named Lilith, that he has only two choices. Either die or continue to live but without his memories.

Arata chooses the third option, that of becoming a mage in order to learn to control his powers and rescue Hijiri who he is told by the grimoire, the small book given to him by Hijiri, is still alive somewhere. With this choice, Lilith brings him to the Royal Biblia Academy where she teaches and mages learn to hone their powers and immerse themselves in their studies no matter how dangerous their goals actually are. Here he is informed that his magical abilities place him as a candidate to become a Demon Lord should he ever lose control but also that the best people to help him are known as the Trinity Seven, seven female mages who are the best in the entire school. 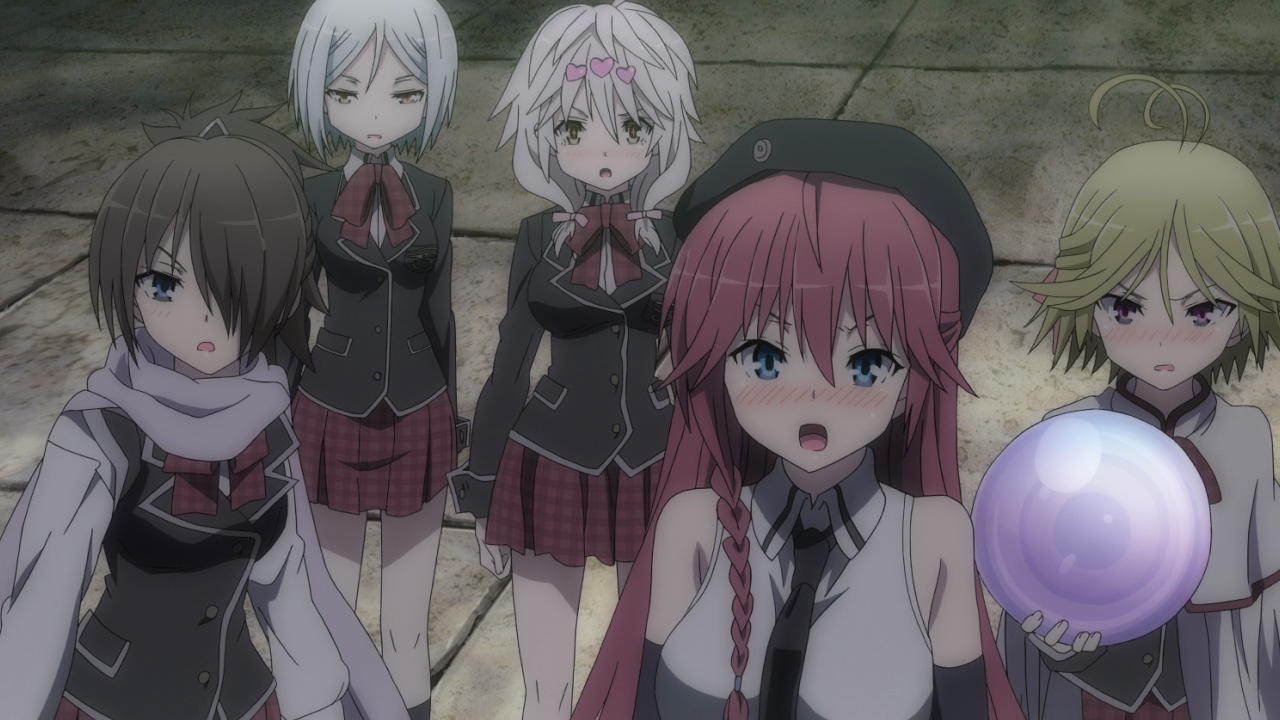 Luckily for him, Lilith is already one of these seven and within the period of a few episodes all of the girls make their appearance as the series goes through the standard roll out of introducing the love interests over the course of the series. Trinity Seven handles this style of introduction better than most harem anime as there are high stakes to many of the introductions that either threaten the lives of those who are attending the school, the lives of the rest of the girls, or simply Arata himself as his position as a demon lord candidate is one of admiration and one to target.

Thanks to this style of introduction, the actual plot only begins to move forward at the very end of the series which is unfortunate since it leaves so many questions and plot threads hanging. This is likely done in an effort to keep fans interested in either the manga series or a second season but be prepared for that. Thankfully while the story suffers from incredibly slow development with only a few interesting twists being worked in early to keep viewers on their toes and almost no actual changes over the course of the series until the last few episodes, the focus on the characters and harem antics make for a strong selling point in Trinity Seven. 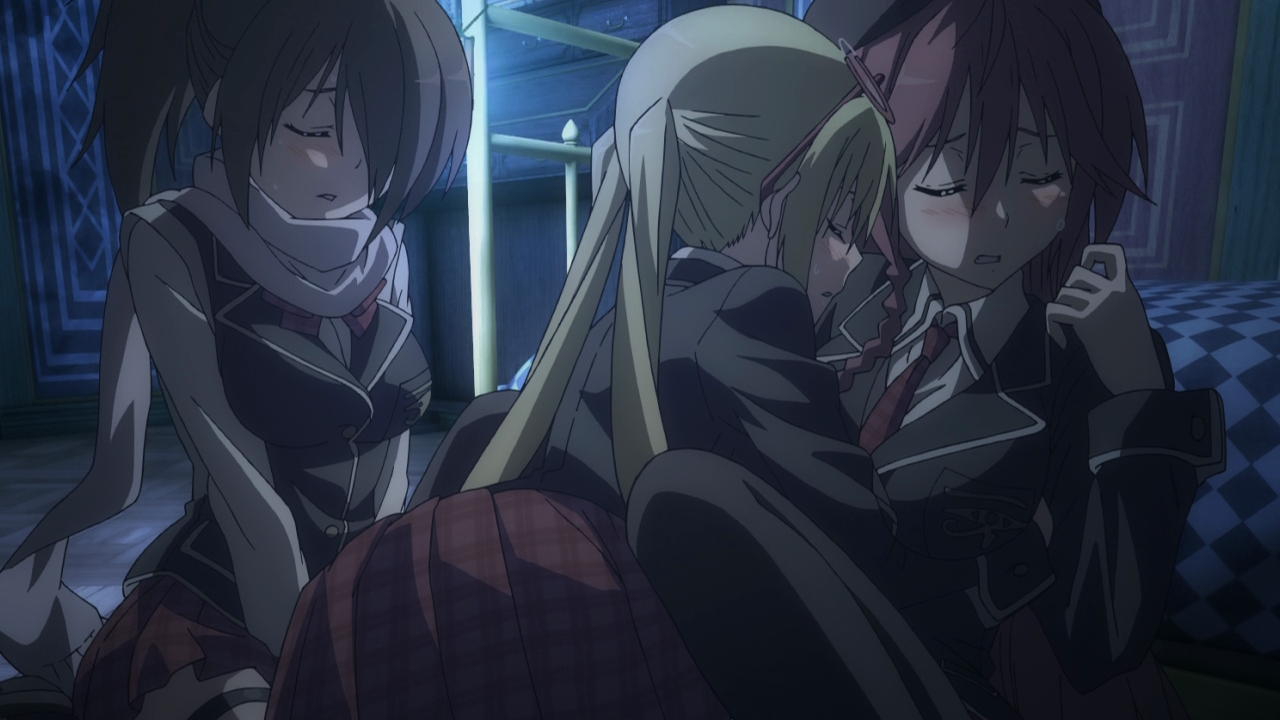 Arata serves as a blunt harem lead that isn’t afraid of letting his perverted side openly show around the girls and thanks to this he is already a step ahead of most harem leads who are incredibly dense in nature. Instead Arata is readily aware of how certain girls feel about him and often teases them in ways that they like or simply flirts with the cast with more than a few girls openly flirting back with him, often causing a little trouble in the ranks as Lilith or another girl get angry about their “shameful” behavior.

As for the actual girls in this series, fans will find Trinity Seven’s female cast to be quit the treat. They only barely fit into the standard archetypes when they are introduced and quickly begin to show their eccentricities making it hard not to quickly fall in love with how certain characters act, such as Levi’s constant teasing, Arin complaining that she can’t be more straightforward, and Lilith blushing and muttering about what the rest of the cast is doing at any given time.  This is only a small sample of what one can expect from the girls that make up this harem series, especially when it comes to Liese, and the interactions between these great female characters and a lead character with a spine help support Trinity Seven at its weakest moments with genuine comedy and great personalities. 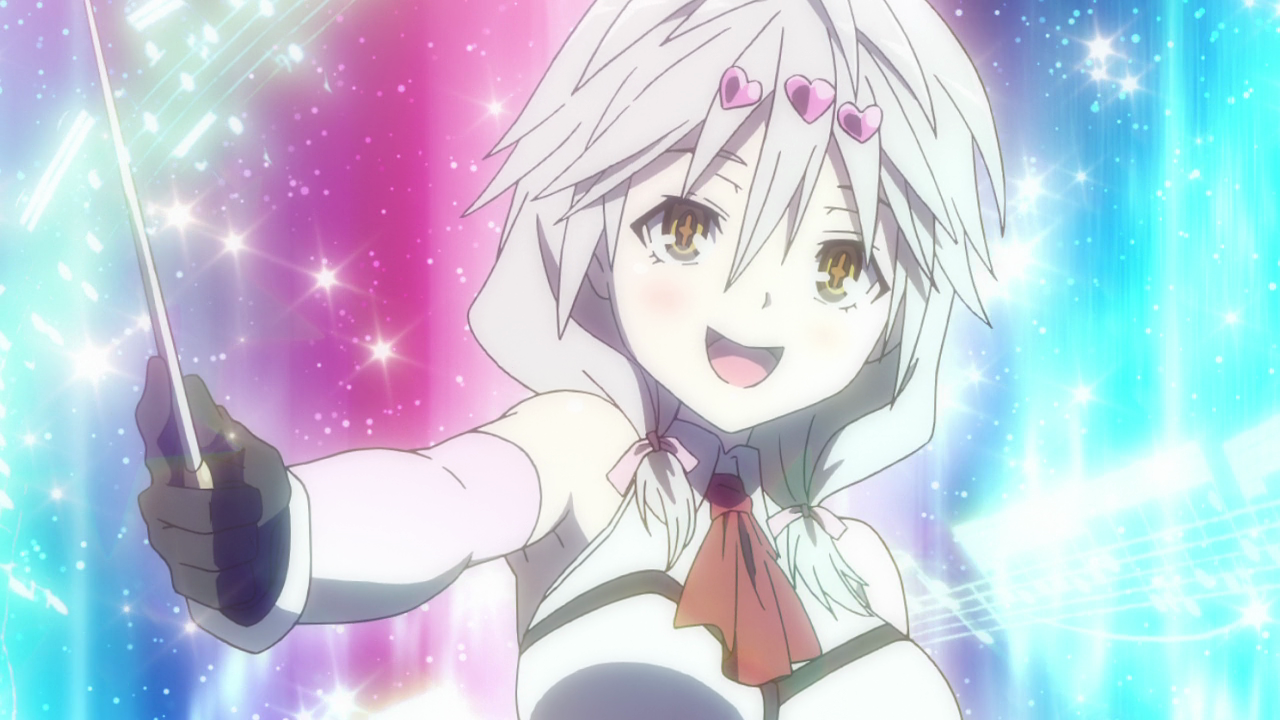 These moments are all to frequent I’m afraid as Trinity Seven fails repeatedly when it comes to the action fantasy side of things. The magic in the series is so poorly explained that viewers will never really know what to expect from the cast all the way up to the final battle and even then characters are spending more time talking about how to use magic than they are actually fighting. This removes all tension from fights as you have characters that are simply talking or never taking anything seriously until the fight comes to a close once an explanation is wrapped up. Even the magical techniques used by most of the characters come off as incredibly simplistic despite their explanations sounding far more complicated than they ever should be.

As many would expect from a harem series such as Trinity Seven, there are quite a few moments where fan service is used so let’s get that out of the way at the start. These scenes are presented in high quality and while a few are quite blatant, it is worth noting that the animation company did not alter the release for Blu-ray. This means that there is no real nudity shown even in this home release as all scenes feature either convenient light beams or tattered clothing as censorship. 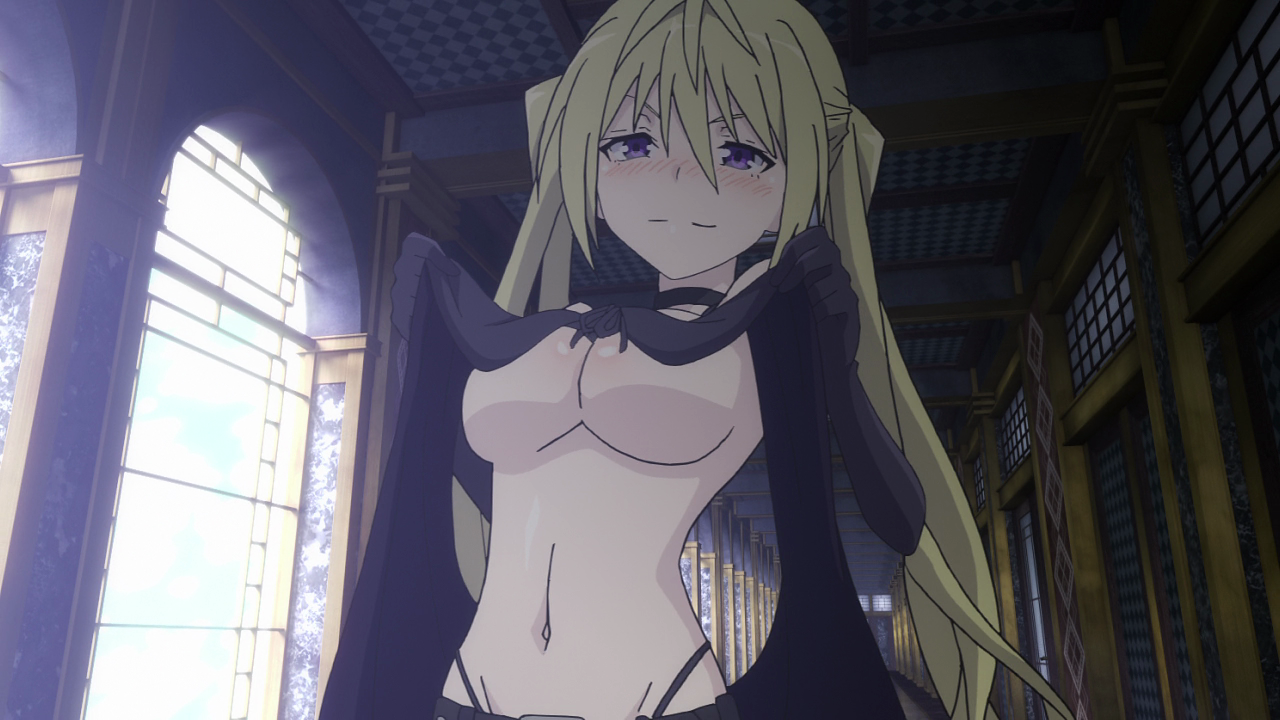 In the rest of the series, the background scenes are fairly standard but the character designs really tend to shine here. The girls are all incredibly appealing looking with a number of great looking scenes produced thanks to their actions and the freedom of the characters’ personalities. The magic used by the characters is rather appealing to start with but unfortunately loses its charm as the characters tend to fall back on standard less than flashy attacks throughout the series.

Sentai Filmworks has released Trinity Seven in North America featuring both the original Japanese voice cast as well as their own freshly recorded English dub. The English casting for this series is quite fitting for the most part, though some scenes feel like they lack the same amount of enthusiasm compared to the Japanese voice track. That is likely due to the fact that the Japanese voice cast features quite a large number of prominent voice actors. 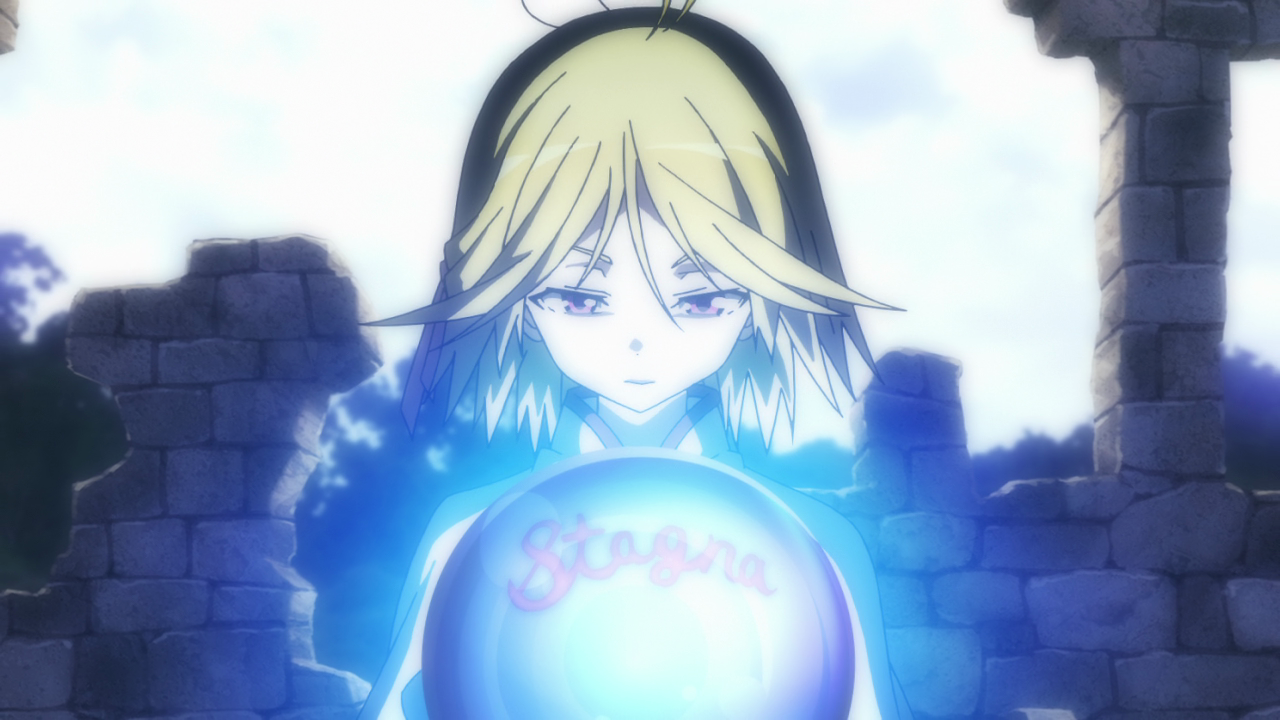 As far as the soundtrack goes, Trinity Seven features a fairly standard set of background music but where it really shines comes from the outstanding opening theme “Seven Doors” by Zaq and the four ending themes that change throughout the course of the series. Every one of the ending themes is fitting for the events that occur during the episode and considering they are performed by the Japanese voice actresses for the female cast, fans will certainly be pleased with the way these songs sound.

The only special features included in this Blu-ray release of Trinity Seven come in the form of a clean opening animation, clean versions of all the ending animations, and trailers for other Sentai Filmworks releases.

Trinity Seven is a series that has a lot of potential and it may have actually delivered on it down the line but unfortunately with only twelve episodes to work with it failed to do so at a pace that allowed for both character development and meaningful story advancement. With every confrontation lacking tension, loose rules applied to the magic in the world, and a slow plot with only a few intriguing twists here and there, the major redeeming factors of this series come from how great the characters in it are and how funny the banter is between them. Those who enjoy harem anime will be pleased with the way Arata interacts with the girls and how they often flirt back with him or react to his teasing so be prepared for a series that has strong characters but fumbles when it comes to crafting a solid storyline and delivering on the fantasy action side of things.

Trinity Seven features strong lead characters and genuinely likable girls who make up for some of the best moments in the series by delivering plenty of great interactions but sadly doesn't deliver satisfying action sequences or major story development in the time it has to work with.
7