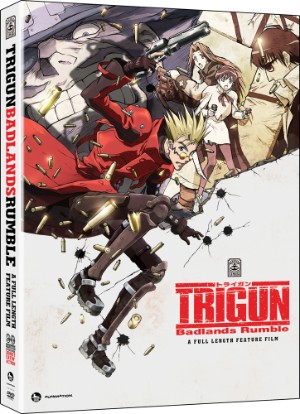 Overview:
It has been many years since the humanoid typhoon, Vash the Stampede arrived in North America. The original series was first created by MADHOUSE in Japan back in 1998 and was brought over to our shores a few years later in 2003. The original series ran for twenty six episodes and most who have watched it should know about the rather definitive ending to the series. So imagine the surprise of many anime viewers when they heard that a new movie was being released for Trigun. Named Trigun: Badlands Rumble the hour and a half movie has been completely translated and released, so how does it stack up?

Story:
The planet of Gunsmoke is a harsh one, most of the world is a barren desert full of strange creatures and humans make a living wherever they possibly can and establish small towns. Gunsmoke is a lawless planet; one full of outlaws, bounty hunters, crooked politicians and more. But there is one man who stands above the rest, with a 60 billion double dollar bounty upon his head, and that man’s name is Vash the Stampede.
As far as anyone who truly knows who Vash is however, he is far less of a stampede and much more like a comedic pacifist, usually more eager to hit on women, get drunk or chow down on the closest donut. But his pacifist lifestyle hasn’t always created the best outcome for him, especially twenty years ago when Vash was caught up a bank robbery by the notorious criminal Gasback. 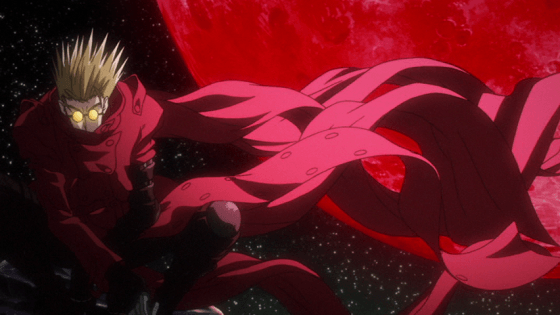 After saving Gasback’s life during a betrayal in the robbery, twenty years have passed and Gasback had not learned his lesson. Instead he now seeks a personal vendetta against those his former partners that betrayed him, especially since they are now rich and prosperous in various positions. The bounty for Gasback has risen to quite an impressive amount and every bounty hunter has begun gathering at the rumored city for his next robbery in an attempt to claim this bounty.

While this attracts not only bounty hunters of all shapes and sizes it also attracts Vash, who happens to cross paths with a fiery redhead named Amelia. Is Amelia just like any of the other bounty hunters, or does she seek Gasback for a reason much deeper than her pockets? With tensions on the rise and itchy trigger fingers waiting for the arrival of Gasback, what will happen to our happy-go-lucky pacifist?
Now it is worth mentioning that the story is actually canon and is set to take place shortly after Vash meets Wolfwood in the anime series. That being said this means that Badlands Rumble is no form of continuation, but an extended piece of the anime to help bring Vash back into our minds and hearts one more time. 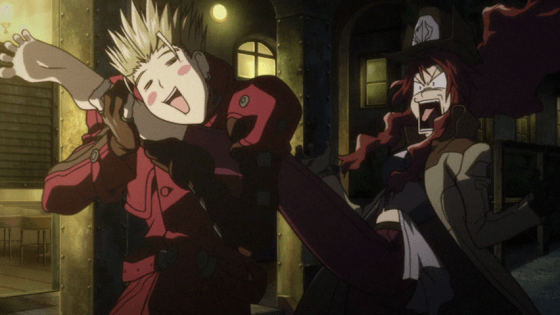 Despite this, Trigun: Badlands Rumble doesn’t step too far out of its boundaries here with its storyline. The main focus of the story is obviously the internal struggle taking place for Amelia and her mysterious need for vengeance against the man named Gasback, but there is a whole lot of padding to the storyline, so much so that the hour and a half movie feels like it was extremely stretched at places and padded out in many others.

All of the main characters from the story return, meaning viewers will not only see Vash but also Milly, Meryl and Wolfwood. Unfortunately these characters are given pretty much no actual plot driven rolls. Mostly these characters are in there to throw in plenty of anime series references with Meryl becoming angry and flustered whenever she has to deal with Vash, a black cat in an area or Wolfwood calling Vash Needle Noggin. In fact none of the characters really help drive the plot alone as things usually just seem to unfold at a rather expected pace, with the first two thirds of the movie being mostly build up with the final third being all about the action and gunplay that we expect from Trigun.

That being said, Vash is back with all of his strange wonders. Not only does his pacifist-where-possible lifestyle throw a twist to any altercation that he is in but his presence is always felt in every scene. Whether he is flirting with Amelia, crying over the last donut or just getting drunk with the guys he is the complete lovable moron fans will remember. That is of course until things get serious, betraying the idiocy he had shown previously which has always been one of the most interesting 180 degree turns in personality. 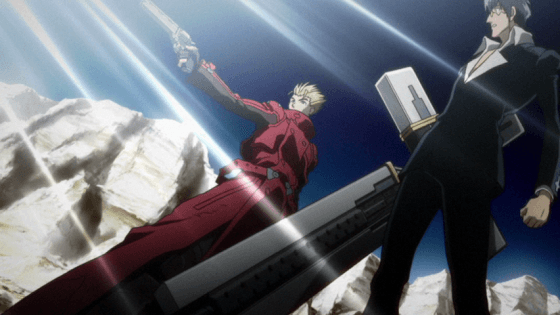 Artwork:
It is easy to see that there was a much larger budget available to the studio when they were working on Badlands Rumble. There is a huge amount of detail paid to practically everything on screen at a time and the quality of the overall picture is superb. Everyone’s favorite returning characters look the same and the show does have the standard deformation whenever something exceptionally comedic takes place.

There are plenty of bounty hunters to be seen and if you thought you would be seeing generic looking guys all the time, you better think again. Nearly every bounty hunter that is milling about the town or fighting has a completely different look and some of them are quite outlandish, especially when their weaponry is thrown into the mix. This creates an amazing visual as you place these characters against an already amazing backdrop. In fact the action with all of these characters is perhaps the best you can find, whether it be the giant showdown or an earlier bar brawl full of refreshing character designs, even for those who are barely seen for a few seconds. 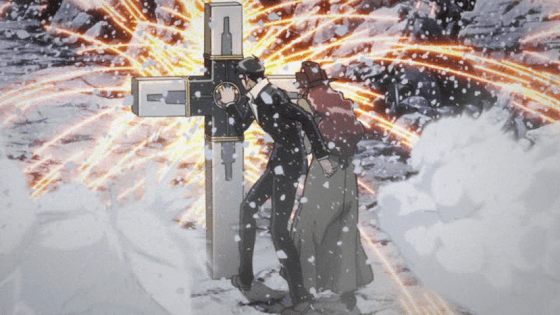 Audio:
Now FUNimation may have opened up a can of worms when they announced that there would only be one character who would be retaining his previous voice actor from the original series. Of course that character would be the main man himself Vash, but all of the side characters would be replaced with new voice actors/actresses. But there is no reason to fret because these new voice artists are dead on when it comes to replicating the original voices. Vash’s voice actor slips back into his role perfectly and the new cast does everything to mimic the previous down to the letter.

Also something that Trigun is known for is its background music. The background music for the movie returns and many fans will remember hearing many of these themes from the past show and hearing them on the DVD format is just amazing. Viewers will likely end up with chills after hearing some of the themes again made with modern quality. 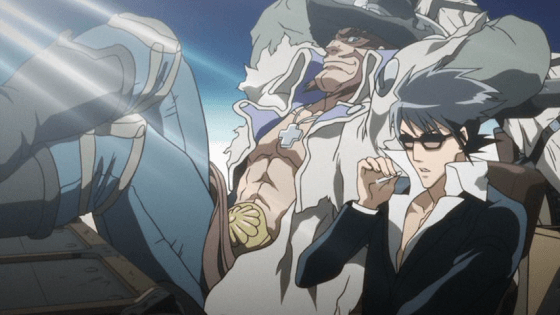 Extras:
Now Trigun: Badlands Rumble comes with quite a plethora of bonuses. So many in fact that the movie comes on one disc, with a whole separate disc for special features alone. These features range from interviews with the cast and crew, promo material from Japan and plenty of other content which is all subbed for viewers. The bonus content may not be very attractive at first but the amount is quite impressive at least.

Overall:
Trigun: Badlands Rumble is true to the Trigun name and the new voice cast does wonders for the source material. However, despite the new story and the focus on two new characters, there really doesn’t feel like anything was really shown here. The movie feels extremely padded with extra unnecessary content that ends up making the movie feel like nothing more than an extended anime episode.

Sure there are plenty of Vash central comedic points and there is a relatively decent amount of action at the end but many watching the movie will feel a bit let down that in the end nothing was developed for the characters. Sure this is a great movie for those who just can’t wait to see Vash one last time, but the long wait with little actual deliverance makes for a poor showing.

I give Trigun: Badlands Rumble