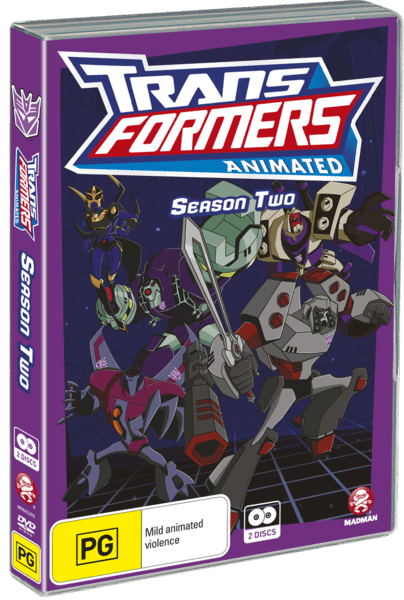 Overview
The only thing worse than dealing with a sworn enemy is having to explain your actions to those you call allies. Having lost the almighty All Spark in combat with Megatron, our rag tag bunch of Autbots are not exactly in the good books where their bosses are concerned . Being the loyal soldier that he is, Optimus is forced to obey the whims of his Commander, putting Earth in jeopardy…on account of them being jerks. 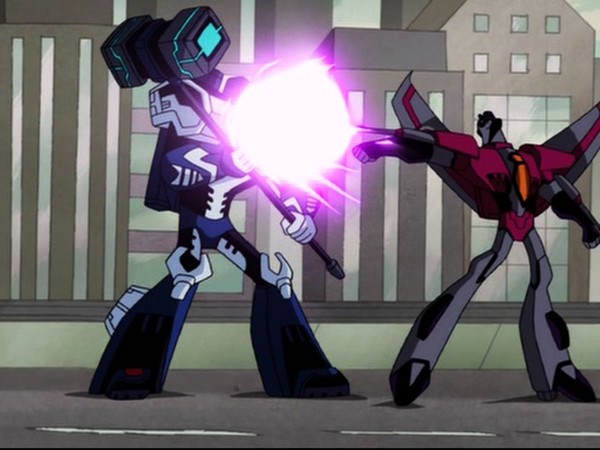 Story
Right from the get go, Season Two introduces two brand new characters for us to hate: Sentinel Prime and Porter C. Powell. Though one is of Autobot origins, both human and Transformers seem to have a vendetta against our heroes. Due to their past that was briefly revealed in Season One, Sentinel bears a tremendous grudge towards Optimus (despite the fact it wasn’t his fault) and never misses an opportunity to undermine him. Despite his heroic actions on Earth, Sentinel (along with the rest of the Elite Guard) see Optimus as nothing more than a maintenance bot acting beyond his programming. It’s actually a scathing commentary on the limitations and negativity that can arise from a class based social system, at least where the “upper echelon” are concerned. Porter on the other hand, quite obviously stands as a representation of the greed that permeates human society. Of course, the series isn’t too focused on such intricacies. In reality, he’s just a big jerk.

Having been “dispersed” during their last confrontation, the All Spark now exists as countless tiny fragments. Naturally, both sides wish to rebuild the incomparable Cybertronian relic and a race to find the pieces begins. Due to the tremendous power of the All Spark, even in its damaged state, countless machines begin to rise beyond their programming. This more robotcentric plotline provides the series with a greater focus on the clash between the Autbots and Decepticons, taking over from the more human cast of villains (though they are certainly still there). The All Spark also serves as a rather convenient method for the series to introduce new characters, like the Constructicons for example. The frequency with which the All Spark creates life is as startling as it is beneficial to the plot. With all the new allies and enemies, the war has no chance but to escalate. Though the biggest bad in Transformers history is still relatively absent for a majority of the season. Which is strange. 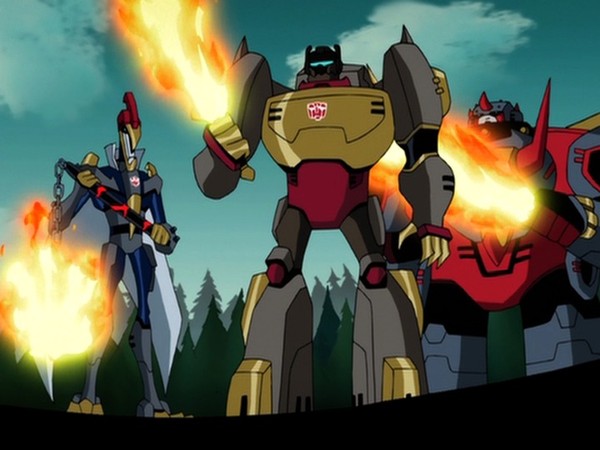 Though it was certainly present in Season One, the disparity between organic and technological is presented as a driving force behind quite afew characters. Meltdown’s illogical hatred of technology, despite his constant use of it, continues to pit him against our robotic heroes. Of course, the Decepticons hold no regard for humanity and will often harm them without a second thought. Manipulation isn’t out of the question either, just ask Mr Sumdac, the stupidest genius you’ll ever meet. However the most interesting perspective on the techno-organic conflict comes from Blackarachnia. Caught somewhere in between the two, her longing to rid herself of her “organic curse” borders on the insane. Of course, being abandoned by her comrades didn’t help her mental state. Despite her outward hatred of her new half, she has no qualms in utilising her arachnid abilities. All in all, it makes for quite a complex and interesting character.

Fans of G1 might also like to take note of a special cameo by a certain familiar couple. Whilst learning to be more approachable, Ratchet crosses paths with Spike and Carly from the original incarnation of Transformers. On their way to the hospital, it would seem the Witwicky family line continues to grow. I wonder if they’ll appear again somewhere in the series… 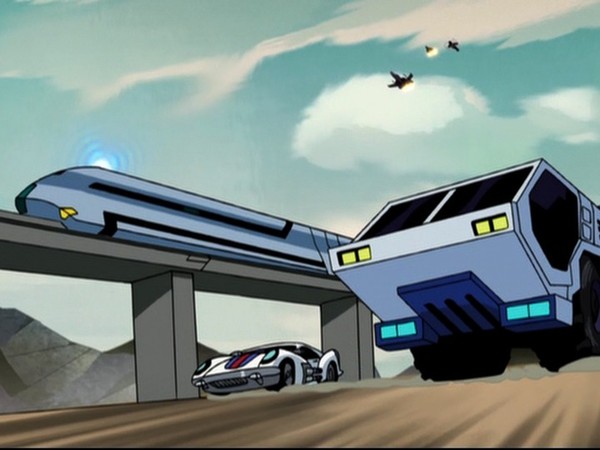 This one might come down to a photo finish

Visuals
Transformers Animated. It’s all there in the title. They’re Transformers. They’re animated. As you’d expect from such a visual existence, this incarnation of the franchise is a lot less serious. This is by no means a bad thing, as it suits the overall feel of the series incredibly well. The less detailed designs of each Transformer presents a much “friendlier” visage, intended for the younger demographic the series is geared towards. Ironically, this simpler style is reminiscent of the G1 cartoon, though this time the lack of intricacy is on purpose.

As is most always the case with Transformers cartoons, newly born Cybertronians still appear as if they are capable of Transforming, even prior to scanning a vehicle mode. However, in an attempt to rectify this common mistake, each Cybertronian is given an original alternate form that is very similar to their chosen Earth mode. Like Bumblebee, who was always some kind of compact, yellow car. Though I’m not sure why they’re so impressed or upset with surprisingly similar modes they adopt. Personal preference I guess. 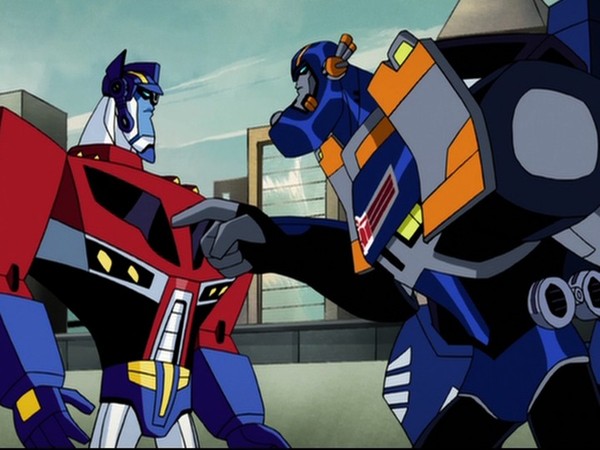 Audio
Just as with Season One, the voice cast of Animated puts in a solid performance. The vocal variation of each character serves to add a tremendous amount of personality to the already visually diverse cast. Perhaps even in ways you wouldn’t expect, such as in one episode where Optimus laughs. Now I’m not talking about the old school episode wrap up chuckles, the Autobot Leader briefly breaks his responsible facade and full on laughs…at Sentinel. It’s awesome.

In addition to the regular cast, there is also a cameo of note. Though only present for one episode, Weird Al Yankovic portrays the highly impressionable, and ridiculous, Wreck-Gar. Lending well to his far from serious stage persona, Yankovic’s performance as Wreck-Gar serves to enhance the humorous nature of this short lived Autobot/Decepticon. He even manages to get in a very specific reference when he outright states, “I dare to be stupid.” In addition to being one of his own songs, the track was also a part of the Transformers: The Movie soundtrack oddly enough, playing over a scene in which Wreck-Gar appeared. Clever. Very clever.

Extras
Just as with Season One, this DVD release features some additional animated shorts. These brief stories are more inclined towards humour and depict some of the “offscreen” moments of the Decepticons. Should you wish to learn more about the Animated Transformers cast, a gallery featuring some additional information is also present. One thing the Season Two release has over its predecessor is the inclusion of audio commentary for the episodes “Mission Accomplished” and “Garbage In, Garbage Out”. Of course, the standard trailer also figure into the mix, but the commentary is definitely the highlight. 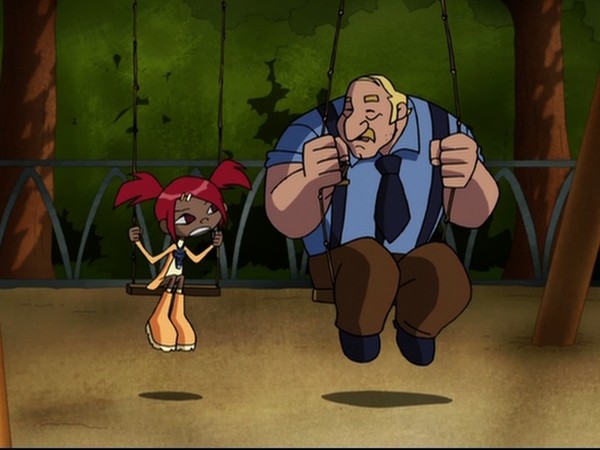 Who said he didn’t have a sensitive side?

Overall
Transformers Animated Season Two is a great continuation of the story that began in Season One. With Megatron back in action, the Autobots were once again forced to focus on their ancient foe, bringing this incarnation more in line with those previously created. That being said, the series still focuses greatly on creating a more humorous atmosphere. Though it would be simple to say that the plucky human sidekick is the source of most of this lightheartdness, it’s not entirely true. Surprisingly, every character, human of Cybertronian, gets the chance to bring a smile to your face. Whether it’s Blitzwing’s bizarre meeting of the minds, the Constructicons stereotypical demeanour or Starscream’s multitude of psychological issues given life, there’s bound to be something you enjoy. Though with the revelation the finale presented, humour may just have to take a break…at least for a little while.