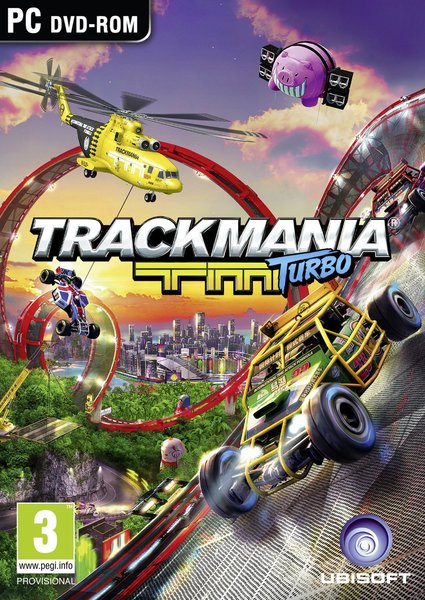 Trackmania Turbo is the latest release in the long running Trackmania series which, unbeknownst to me, has had over 10 different iterations over the past 10 or so years. Best labelled as a stunt driver as opposed to a racer, Trackmania Turbo promises hundreds of micro challenges filled with ramps, loop-the-loops, tight corners and much more across number of fun and colourful environments and game modes. As someone new to the series and was interested in it from a trailer I believe was from E3 last year, I was keen to take the game out for a spin to see what its all about. Read on for my full review.

Now contrary to what I believed when I first started the game, Trackmania Turbo is NOT a racer. There are actually no races against a physical opponent in the entire game, however there often ghosts opponents of your previous time or the time to beat which work almost as well. The closest thing I can think to compare Trackmania Turbo to is actually Super Monkey Ball, just you are up against the clock and moving at very high speeds. The main solo mode contains 200 micro courses to race through that lasts for about 30 seconds on average sans a few multi lap events that cross over the minute mark. 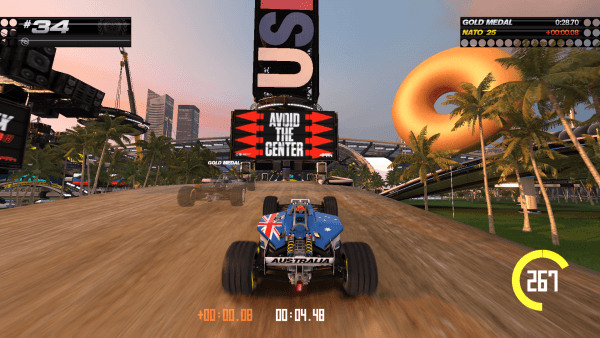 Time is your main opponent in Trackmania

These tracks rely on physics to make them enjoyable and contain jumps, loops, water, pitfalls, tight corners and more to create a challenging course that you have to try and traverse in the shortest time you can. Repeating a track continuously to shave half a second off your time is the name of the game here. It’s fun, fast paced, and just like all those annoying apps that become really popular from time to time such as Flappy Bird, the challenge keeps you coming back for more.

The courses have four main themes to them as well as four different cars to match each one, with each one handling fairly differently from the last. The F1 like vehicle with tight controls is probably my favorite, with the very strong turning ability of the off-road buggy putting it at a close second. You won’t be able to blame the controls here for your failings as they are very precise. There is definitely a bit of a learning curve here especially in regards with how to take corners as handling them correctly is integral to achieving better times. Some terrains such as dirt and sand can wreak havoc with the controls you have mastered and are very frustrating on your first encounters but do add to the challenge and add variety. Practice makes perfect here and the more time you spend with the game the more rewarding it becomes. 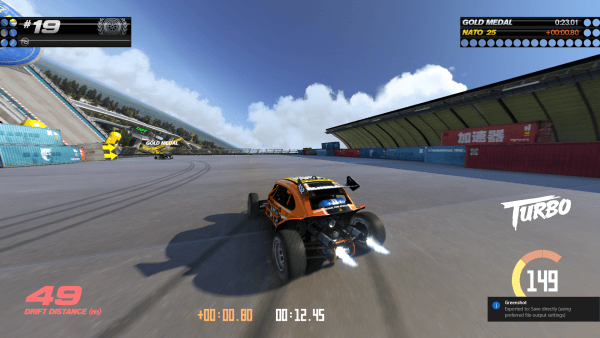 Driving on walls is standard fare in Trackmania Turbo

One thing that really surprised me is that your car has no boost function, with boost zones being limited to certain spaces on the track. The lack of a seemingly essential feature in an arcade racer may seem detrimental, but in the scope of Trackmania it’s not. It simply puts the focus on accuracy when taking corners and ramps as opposed to boost gauge management, which is great for the competitive environment of the game.

All your time in game is made competitive by the constant leader board progress which could be the best I have seen in any game to date. Leader boards seemingly update in real time and a ranking based on the world, country and even your state from the total amount of players in that area is repeatedly shown to you. This is a game best shared among competitive friends but challenging the world and your state is a pretty good substitute. 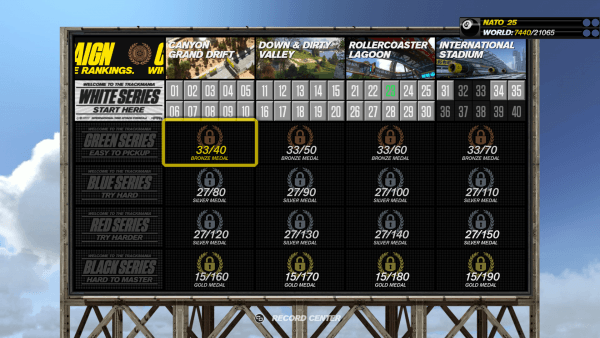 I hope you’re not a completionist…

In respects to game modes there are plenty of options here. You’ve got the main solo campaign with 200 unique courses to go through. Each track has a bronze, silver and gold time as well as a very hard to get Track Master rank which I only got 1 of throughout my play through. Getting enough of each type of medal unlocks more tracks which does feel limiting especially at the beginning when you can only play one type of car for 10 races, but it does ensure a steady rise in difficulty. This is where people will spend most of their time perfecting their runs, climbing leader boards and unlocking more tracks and car customisation options.

There is also a pretty heavy focus on local multiplayer which I’m sure some older games will appreciate. We have split screen, arcade mode, a hot seat mode and perhaps most unique, a mode called Double Driver which you can complete the entire career in if you’re game enough. This mode lets two people control a car where the car will steer somewhat in the middle of both players inputs. Unfortunately I wasn’t able to test these modes for myself so I can’t comment on their fun factor, but you should know they exist and it’s nice to see some attention being paid to a mode that is sadly becoming a relic of gaming. 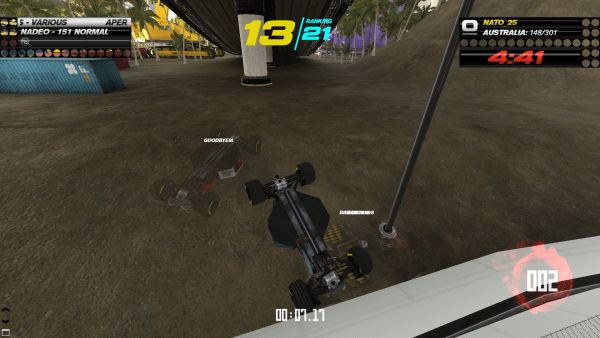 I feel your pain brothers…

Luckily for people without friends who like games or two controllers, we have online mode. This mode is a lot of fun in that it gives you five minutes to record the best time on a track while up to 100 other racers do the same. You can see the ghost of every player as well; so on that first really hard corner or surprise pitfall, about you and 50 other cars are all crashing at the same time as you struggle to learn the track. Your ranking in the group is continually updated and the five minutes goes by really fast which is a testament to how much fun the mode is. For those who want to play with a friend online privately that is also an option and I will also note I had no lag issues in the online modes.

On top of all that there is a track builder broken down perfectly for those who want to tweak every aspect of their custom course or just want the CPU to randomly create one in a matter of seconds. This short paragraph really doesn’t give the track builder the props it deserves but there’s not much to say about it. It’s robust, has all the options you would expect and more and caters towards players of all skill levels. It also does a good job of making your track fit in with the rest of the game, as on beginner mode at least the course will be automatically decorated with buildings or trees. One thing you can’t say about Trackmania Turbo is that it doesn’t have lasting appeal. 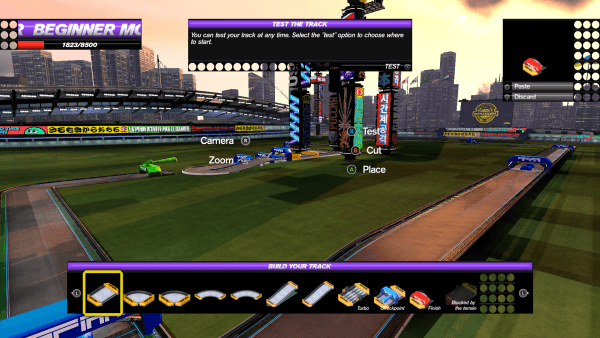 Build your own unique courses with the robust track builder

My only really major gripe with the gameplay is more just an issue on how you learn the game, without any type of tutorial or even a way to view the controllers button layout in game available. This lead to some frustration especially at the start where I was constantly restarting a run saying what the hell is going on until I figured out that B was a reset button.

I understand the series isn’t new and the gameplay is rather simple, but being the first Trackmania to arrive on consoles in a long while. More care should have been taken in explaining some of the less conventional things like how you bounce off water like a trampoline or that your engine shuts off when you cross red x marks (that most players, myself included), probably won’t even notice the first few times. Even the main abilities of cars are left up to the player to figure out in the process of playing, such as the F1 car having the ability to maneuver in the air. Some player guidance would have been greatly appreciated. 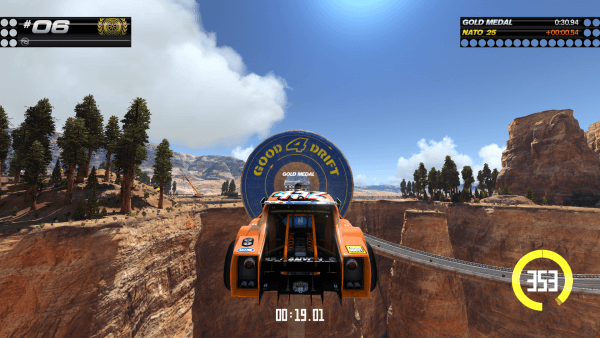 Trackmania Turbo looks great. High quality models, high resolution textures, beautiful and visually stimulating environments, all delivered at a smooth 60 frames per second. There’s not much else you could ask for. The game adapts a very colourful ‘world tour’ theme, with lots of signs in different languages and cultural references which really fit with the arcade vibe the game has and give the game a unique identity. 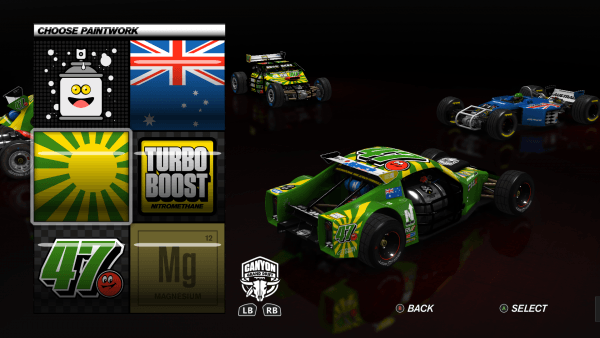 Just enough customisation options to make your design your own.

You have the option to customise each car with a sticker, number, basic stylized paint job, country flag and a material type. It’s rather basic but it’s perfect for this type of title and gives you some goals to work towards as you unlock more designs in each category as you progress.

My only negative about the visuals is that the game forces you in to the first person camera whenever you are on a roller coaster like ramp. This can throw off your momentum and the change back to the third person camera is jarring as well. I’m sure the developers deemed this a must for some reason or another, but it’s still a bit off-putting each time it happens. 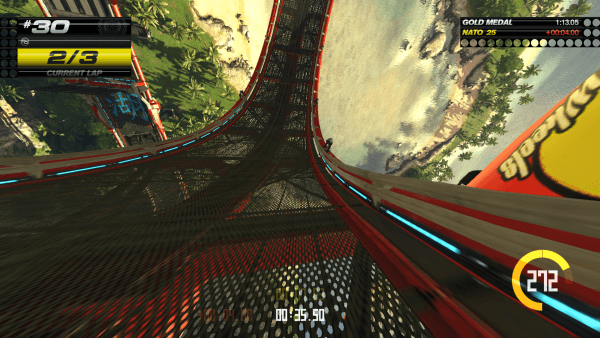 The forced perspective change can be jarring

There’s not much to say about the audio really. There’s about 40 House/Electro tracks that match the speed of the game well but are ultimately forgettable. You can set these to off/on in the settings but I think after a couple hours you will most likely switch to your own music. Unfortunately the settings are missing some essential features such as volume for music, voice and sound effects so while music won’t play during races there doesn’t seem to be a way to silence it at all times.

As for sound effects and voice the game goes for that arcade feel and does a good job of it. Car engines, drifting, crashes, etc. all sound good as do all the rewarding arcade sounds all the way up to the menus. The cockpit guy telling you to watch the paint whenever you hit a wall gets a bit annoying and has limited lines but luckily he can be turned off. 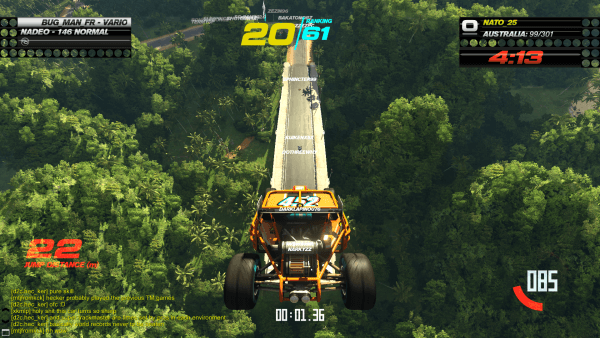 It’s very hard to nail down a specific score for Trackmania Turbo. I can see people playing a couple levels and instantly giving up on the game due to frustration but I can see fans of the series and those who love a challenge absolutely loving it. I personally feel like I fall right in the middle of those two categories but there is no doubt Trackmania Turbo is a fantastic looking, well polished game filled with a healthy amount of content and modes. The game does what it sets out to do near perfectly, with a great variety in the courses and a very competitive community. Your decision to buy it will basically come down to if this type of game is your thing or not, but if you think at all that Trackmania Turbo will appeal to you then I’d say definitely give it a shot.