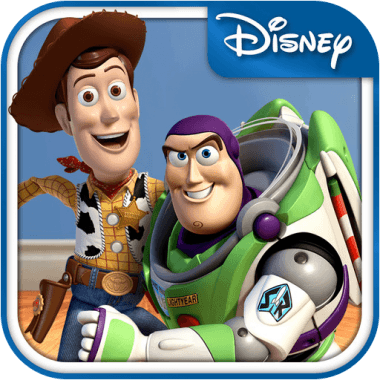 Toy Story: Smash It is a physics based puzzler stars the gang from Toy Story playing make believe in Andy’s bedroom. Buzz Lightyear is the takes centre stage in Toy Story: Smash It, hurling a variety of objects in this kid friendly game.

Remember the days when kids played make believe with their toys? Toy Story: Smash It contains four episodes, each one held together with the sort of make believe tale that Andy himself would have imagined while playing with his toys. The theme of the episode is told in a short conversation at the beginning of each episode. The episodes are playful, kid friendly, yet still capable of inspiring a wonderful feeling of nostalgia in adults. 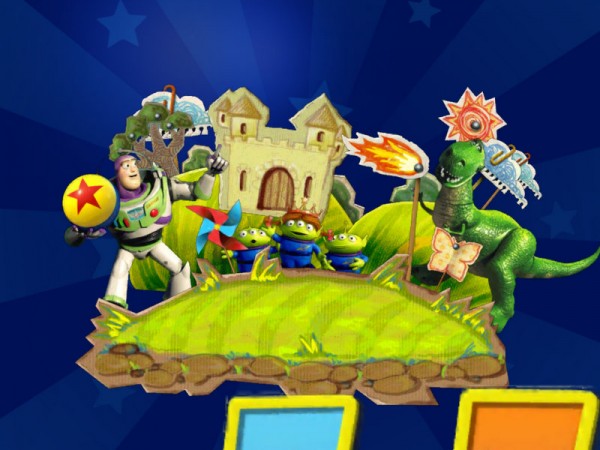 The puzzling element breaks out of the traditional two dimensional slingshot puzzle game into the 3d realm. Not only will the player have to concern themselves with where they are lobbing their projectile, but also where they are lobbing the projectile from. Buzz has a small crescent shaped platform from where he throws his projectiles, providing a variety of possible angles. As the game progresses, Buzz will gain access to new projectiles like balloon bombs that inflate on command. The levels manage to incorporate the special projectiles in creative new ways that become progressively more difficult as the game progresses. The difficulty level in Toy Story: Smash It is bang on. It is a perfect balance, managing to be challenging without being next to impossible. The reset and replay buttons are in easy reach, encouraging experimenting to get the best score possible. 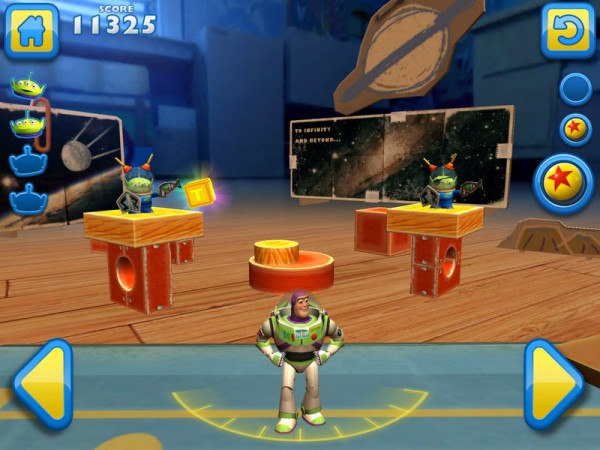 The controls are simple enough for a child to pick up and work very well. A nice sized crosshair gives a good idea where your balls will land. It is great to see small touches like bonus blocks highlighted and glowing when a shot will collect the block. Buttons are large enough to be easily accessed without being intrusive and the UI is well designed.

Toy Story: Smash It looks like it stepped right off the movie theatres. The blocks replicate the toys that inspired them and fall convincingly when struck. I love the brown cardboard and crayon drawings that make up the scenery in the game. It really makes the childhood make believe vibe of Toy Story come to life. 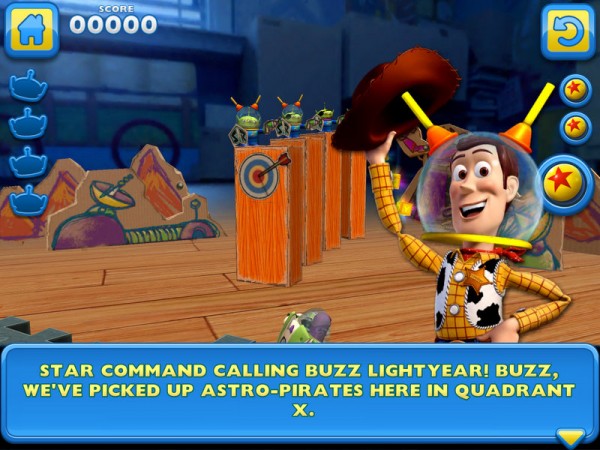 The menu greets the player with an instrumental version of Toy Story’s theme song, Paul Newman’s You’ve Got a Friend in Me. The music in game is almost the same tune done to match the theme of the episode. For example, the second episode clothes the song in the cowboy theme with the classic whistles and guitar strumming. There’s nothing particularly offensive about it, but the same tune does get a little boring after a while, making me look forward to the few seconds of You’ve Got a Friend in Me during the menu. The sounds effects are excellent, I particularly like the comments Buzz Lightyear will make during the game to provide a hint on the level. I’m not sure if they brought Tim Allen in to provide the voice of Buzz Lightyear, but if they didn’t, they found a voice actor that sounds very much like him. 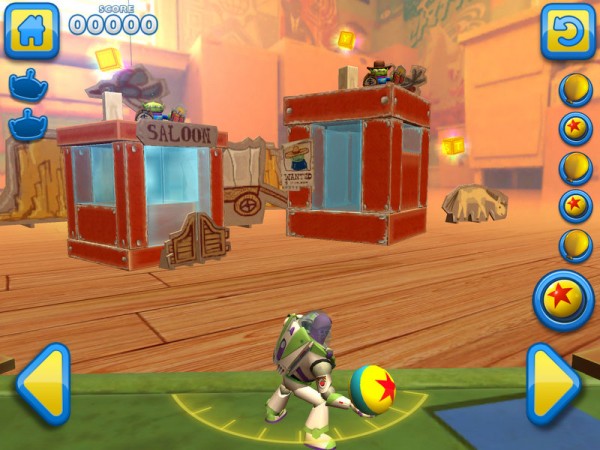 Toy Story: Smash It is a fabulous example of taking a movie franchise and making a good game out of it. It’s obvious the developers took the time and care to create a fantastic game that happens to be part of the Toy Story franchise rather than creating a crappy to mediocre game with the franchise slapped on. It is a refreshing breath of air in a generally stagnant genre. It appears the developers are prepared to provide more content for Toy Story: Smash it, so the game is a fantastic buy at $0.99. I highly recommend this polished and fun game.