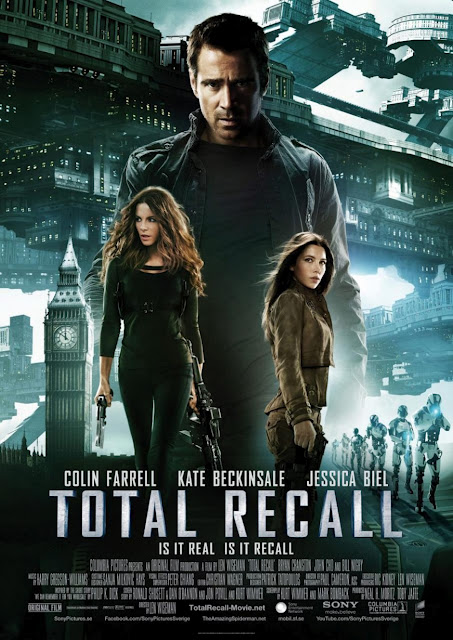 Overview:
Reboots are trivial things aren’t day? They’re just an exercise in recycling old ideas in an attempt to bleed more dollars out of something that has most likely passed it’s point of relevancy or profitability. So that brings us to Total Recall, a reboot of a 1990 film of the same name which in itself is adapted from a short story titled ‘We Can Remember it for You Whole Sale’. One could hazard the question of whether there was a point in remaking what many consider to be a Sci-Fi classic. Was rebooting Total Recall worthwhile? I would respond that question with the answer – Yes and No. 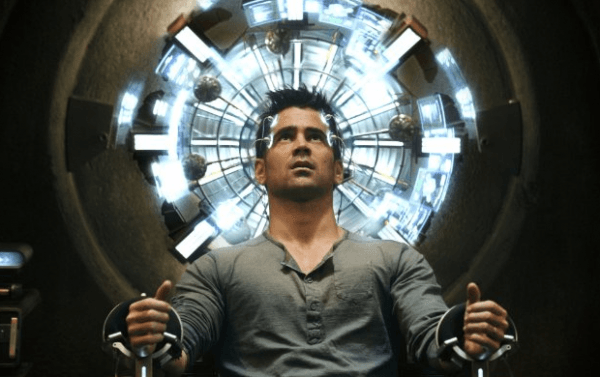 Story:
Fans of the original film perhaps remember it most for it’s setting of Mars, it’s three breasted prostitute or perhaps the infamous line ‘Get your ass to Mars!’ As a fan of the original myself I was somewhat taken aback to realise that only one of those things was in this film and it was the least essential one to the plot – the three breasted prostitute (not that I am complaining). So instead of getting his ass to Mars, the film leaves Douglas Quaid on Earth torn between the quietly warring nations of The United Federation of Britain and The Colony (formerly Australia). This is a completely different setting from that of the original film and the Philip K. Dick short story. So in that regard, Total Recall 2012 warrants it’s existence by doing something different. This isn’t going to be a straight up remake, it is going to try and tell a different yet familiar story. As far as that goes, it does okay.

The film itself doesn’t do much particularly new and in fact borrows a lot of material from other science fiction, in particular the video-game Half Life 2, of which a large portion of the film seems to have taken inspiration from. There are many other similarities to other films both of the Sci-Fi genre and Action genre. For example there are a lot of scenes that take their cues from the original Die Hard film.

At it’s core, Total Recall is trying to tell a far more emotional story than the original far more camp version. Unfortunately though, it rarely succeeds at hitting the right emotional moments, due to it’s inability to develop characters beyond a mission statement (Quaid wants to know his true identity, his wife wants to kill him for being a traitor, Cohagen is evil because he is and Melina loves him because she does). It’s all rather trivial and contrived but despite the lack of emotional investment, I did find myself thoroughly enjoying the twists and turns the story took, even though I knew the majority of what was coming.

While failing to provide an emotional hit, the film does have occasional flashes of brilliance with excellently played out action sequences that would thrill even the most wayward of action film fans. Despite that, it amounts to very little more than meandering fun as there are far too many plot inconsistencies and under developed characters for you to enjoy it beyond face value. Try digging any deeper and everything will fall apart in grand fashion. 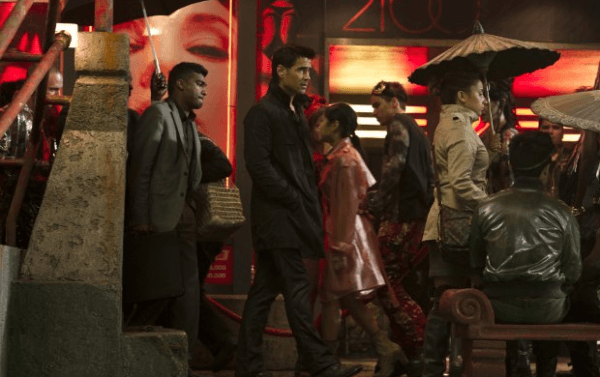 Total Recall is an exercise in going through the motions not of a reboot but of a standard action film. Most of the beats it hits feels familiar, not because its a reboot but because it draws from other action films so heavily that its hard not to feel as though you have seen all this before. It’s all so derivative, right down to the predictable dialogue. So many of the lines in the film felt lifted from others, or at least simply reworded. The actors do their best with the writing they are given (Cranston in particular does an excellent job as Cohagan despite the 2D nature of the character) but can not ultimately redeem the wooden nature of it all.

It never connects the dots on it’s themes either. We as an audience never truly question whether things are ‘real’ or not because the film doesn’t invest enough time into trying to make us believe it may not be. Nor do we ever get the feeling that the resistance are truly good other than being beaten over the head with the fact that they are the good guys, for some reason or another.

Ultimately the film never managed to get the wheels turning when it comes to it’s plot or themes. Nothing ever truly connects and we are left simply with some pretty action to enjoy for a fleeting 2 hours. 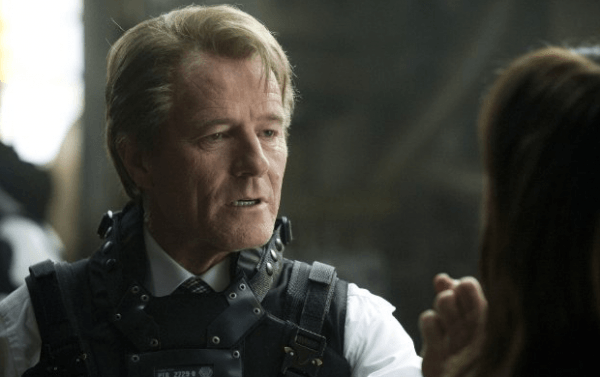 Visuals and Audio:
Aesthetically and aurally, Total Recall is your standard Sci-Fi fare. Sci-Fi genre veterans won’t see much here that they haven’t seen before albeit in a slightly different manner. As a Sci-Fi setting the world of Total Recall is suitably grim, with The United Federation of Britain taking it’s design cues from things like Mass Effect and Half Life 2 and The Colony looking like Sydney Darling Harbour was made into a partially floating shanty town (I personally was reminded of Jak 2). It does the job of providing an interesting enough setting but we don’t get to explore it enough to truly get the feel of it. Every time we begin to take to a location we are whisked away to somewhere else, never staying long enough to really appreciate the intricacies of the world.

When it comes to the film’s soundtrack, what can you say other than it was disappointing? There is a heavy overuse of pseudo dub step tracks and the ominous and over bearing horns arrangement that so often sounds throughout the film. All in all things could have been better, but they aren’t. They don’t go for anything original like the 1990 version and instead just opt for the most generic denominator. 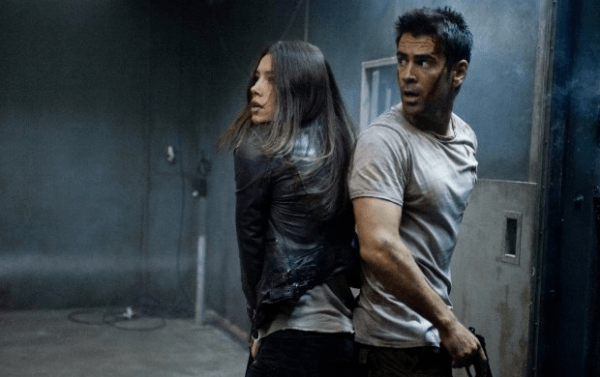 Overall:
With all that said, Total Recall isn’t by any means that bad of a film, it has a great deal of flaws but it’s still a fun 2 hours to switch your brain off to. If you are looking for a true reboot of Total Recall, then you won’t find it here. This is a vastly different film that never fires on all cylinders in the way that the 1990 version does. It doesn’t provide any food for thought, but if you’re only in it for the action and something to blow some time with, then Total Recall is for you. If you’re looking for something with more substance, then maybe you should get your ass to Mars and watch the original film, at least that film had camp Arnie at his best. Let’s just say that years from now this won’t be the version of Total Recall that people will totally recall.