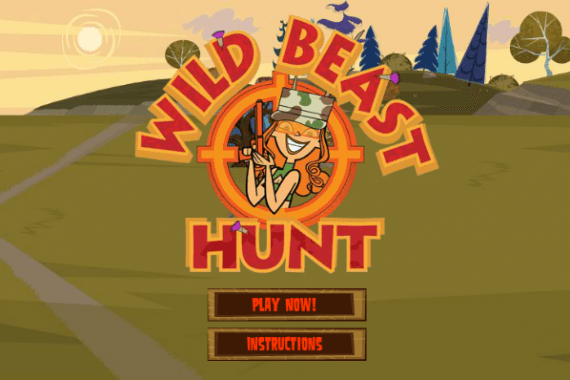 Total Drama Island is based around a reality TV show that is a cross between a school camp, and Survivor. So it is practically a dream for flash games, given that the whole show is made up of mini games. So, will Wild Beast Hunt translate as well as it sounds?

In Wild Beast Hunt you play as the beautiful and crazy Izzy (or assuming so since she is in the icon, you don’t actually see who you are) as she seeks to take down all the cute critters in her line of sight. The story line? Well, you have a limited amount of time so you better get that crosshairs moving. 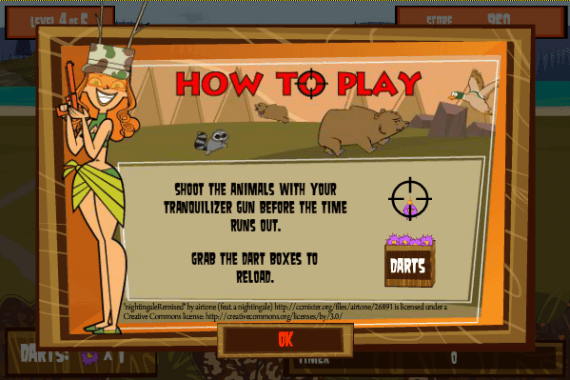 Wild Beast Hunt is an arcade style shooter (with darts in the place of actual bullets, and the animals magically disappearing when shot). You have a field of vision that is slightly larger than the screen, so hovering your mouse over the left and right side of the screen will allow you to see a bit further. This isn’t too large though, in fact most of the time you don’t need to move your vision unless you’re looking for a darts refill box. 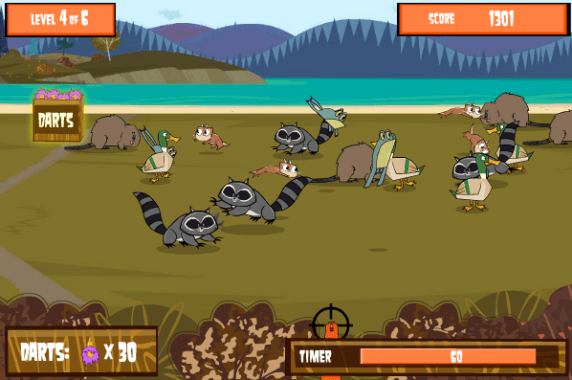 There is a timer, a set amount of darts, and then you’re off. The range of animals increases as you get progress through the levels, of which there are six in total. While that may sound like nothing, each level can take a little while to master, given the range and huge amount of animals you end up encountering. By the end of the game you’re so swamped with critters that you can spray the screen with darts and hit a few out of mere luck. But that’s a waste of darts, and isn’t recommended.

There are the fast moving animals and the slower ones, with the slow ones requiring a couple of darts to take down, and with each dart they move a little faster because when something’s firing at you that is the automatic response. 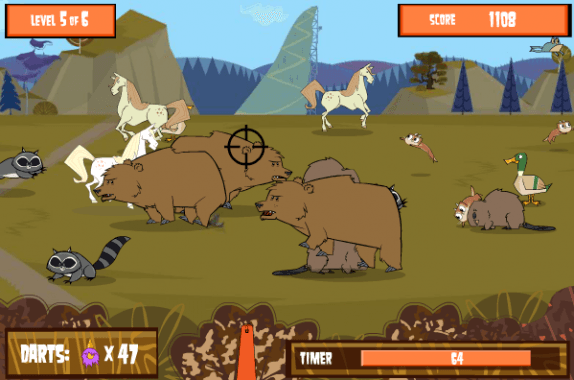 There is a set number of animals in each level, and they pace back and forth on the screen until you hit them with a dart and they fade slowly from existence. There’s probably some people out there who would be uncomfortable with the target demographic, young kids, shooting poor helpless squirrels, but let’s be honest that’s better than them shooting people. And the game is fairly clear that they are firing darts, which is obviously the kinder way to do it. 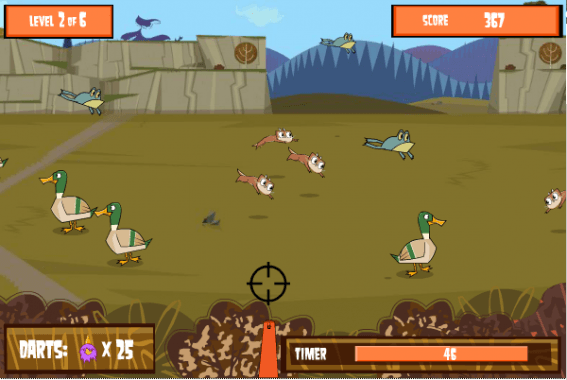 The game did experience some lag when I was playing, which actually came in handy because it let me take shots that had previously eluded me. Once you hit about level 3 you’ll find that the game hits a bit of a plateau. New animals are still being introduced at this point, but they are large and lumbering and simply walk along the ground. Given that I found the hardest critters to be frogs, that moved fast and jumped in an awkward pattern, I thought that perhaps the order of the animals’ introductions could have been shifted around with the larger animals coming first and the small nimble ones being introduced later on.

The graphics follow the same style of the show, and the animals are charming enough, going around for their little forest romps. The background is a set image, and even though you are technically staring at the same scene for however long you play the game for, it isn’t really a bother since you’re far more focused on what’s between your crosshairs. 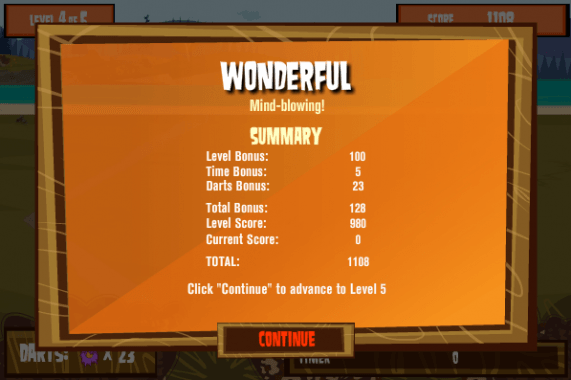 The soundtrack is a little jazzy sort of soft snare-drum number accompanied by animal sounds. It doesn’t distract from the game at all, and adds a forest-y vibe. As someone who is quite picky with game soundtracks, I found nothing offensive about this one, though neither does it add anything useful to the game apart from maybe heighten your tension at taking that last shot.

While the game does a good job of keeping you occupied and invested while you’re progressing through the levels, I’m not entirely sure about the replay-ability. Once I completed the game I didn’t really find myself wanting to go back and give it another play through to see if I could top my score. Once I had finished it, I felt like that was enough dart-ing of tiny woodland creatures for one day.

Still, for what it is it works very well. There’s a big variation of creatures, a good time limit, and (usually) a good supply of darts. Which will at first seem excessive, and in the later levels are very necessary.

Total Drama Island: Wild Beast Hunt is a great way to pass the time with a classic arcade shooter and a popular franchise.