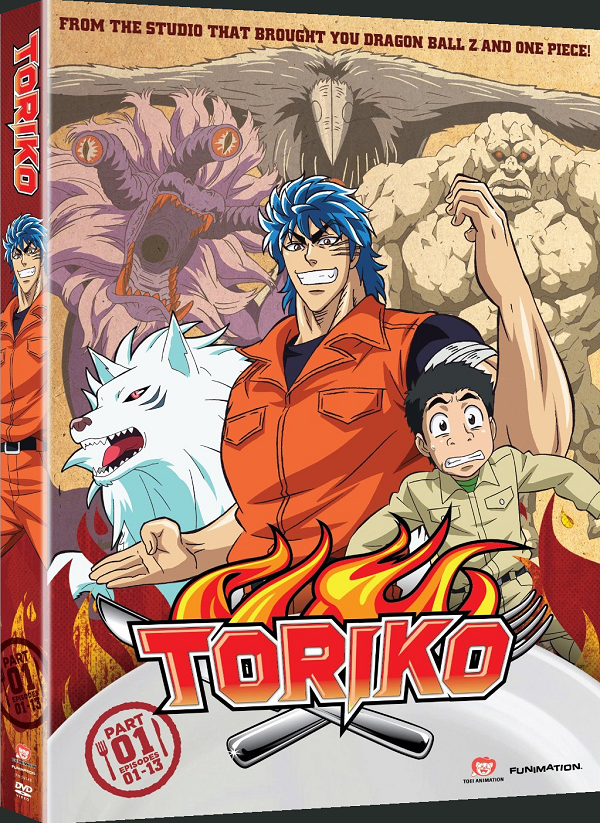 Overview:
The anime world is full of famous names that have worked on iconic series and sometimes it just so happens that every so often, a whole studio is recognized for greatness thanks to the series that they have produced in the past. As such when it was revealed that Toei would be handling the anime adaptation of Toriko, a rather unique take on the action and shōnen genre, many people were very excited to see how the popular manga would look in animated form. Thanks to this and the record of shōnen series in the West, FUNimation has brought Toriko over to the West. Now… will Toriko: Part 1 leave viewers drooling for more?

Story:
The world of Toriko is something many of us have only dreamt of. In this world, the only conflict that ever seems to arise is over food, but not due to starvation. No these confrontations revolve around hunters taking down humongous exotic animals for the meat in their bodies. You see… Toriko takes place during the Gourmet Age where the entire world is full of wonders such as cheeseburger flowers, mystical fruits that contain seven wondrous flavors and some of the most dangerous creatures you will ever lay eyes on. 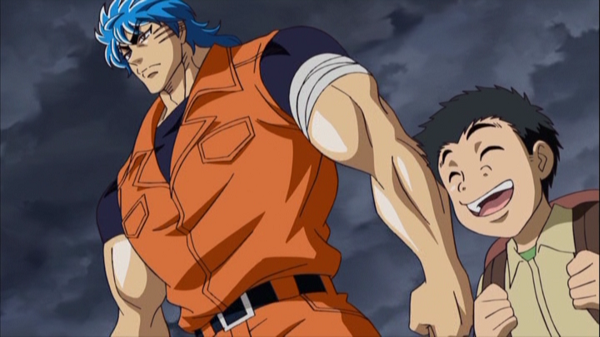 In the Gourmet Age, only the strongest and hungriest of fighters can obtain the rarest ingredients around and these people are known as Gourmet Hunters. Among these Gourmet Hunters there are four hunters known as “Heavenly Kings.” These hunters are known throughout the world for discovering the most ingredients and taking down the toughest creatures, as such when someone wants to obtain a rare ingredient, these hunters take to the scene, not because of the task at hand, but to fill their bellies full of succulent meats and track down the best tasting food in the world so they can complete their life-long journey… create a rare full-course meal consisting of the best food the world has to offer.

In a world full of hunters, rare ingredients and monstrous creatures, there are still those who have to properly prepare and cook these ingredients into delectable morsels. One such starting chef named Komatsu is tasked with tracking down a rare ingredient and ultimately seeks out the man who has discovered the most ingredients in the world, the Heavenly King Toriko, to help him out. 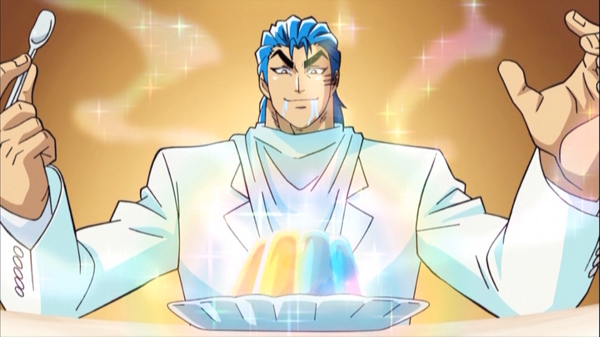 After working so well together, Toriko becomes quick friends with Komatsu and much of Part 1 follows the journeys of Toriko and Komatsu as they venture through a strange land and take down a beast desired for its rare meat. As such, the better part of Part 1 is something of a creature-of-the-week series with hints at a plot moving behind the scenes.

A little more than halfway through part one however, viewers are treated to some further plot development as the illustrious world of Toriko isn’t just sweets and monsters to defeat, there are also organizations attempting to gather rare ingredients for nefarious means. At the same time this organization, known as the Gourmet Corps, lead Toriko and his friends into the first actual story arc of the series so far, which ultimately is left to continue in part two. 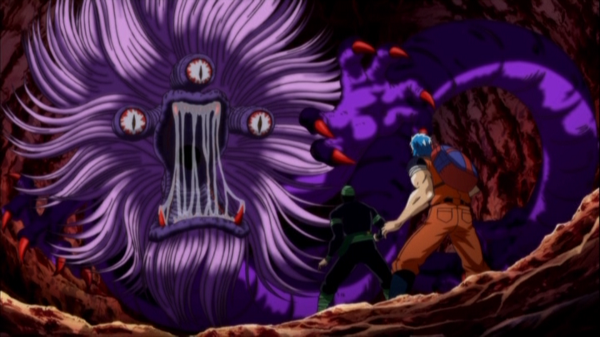 Considering the fact that nearly every shōnen series mostly focuses on combat that takes place between two human or human-like fighters, it is rather interesting to see how Toriko and the rest of the fighting characters in the series take on many of the beasts that they face down. It is also worth noting that while there is zero character development within this first part, the show is not without dramatic moments and explanation of each character’s ideals.

As for the characters themselves, Toriko: Part 1 introduces a large number of the re-occurring cast throughout these first thirteen episodes and although none of them receive anything in the way of character development throughout this first release, viewers will find that the characters presented in Toriko are rather unique both personality wise and diversity. While there are certainly standard overpowering characters, Toriko keeps things fresh by also featuring plenty of weaker characters that continue to travel alongside Toriko and the rest despite the danger so that they can reach their final goal. 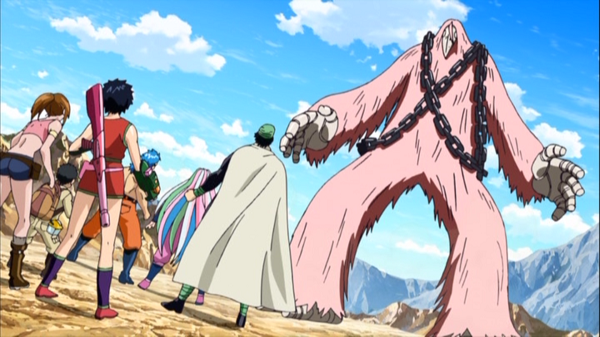 Ultimately, Part 1 of Toriko does a decent job laying the groundwork for the cast’s abilities and challenging them, however the actual plot begins to develop far too late into this first release and barely any character development occurs. Plus, because the series focuses on revealing already obtained powers or ridiculous overpowering of characters, nearly every fight lacks the tension and drama of a close-fought victory.

Visuals:
One of the first things that will strike viewers is how bright and colorful everything in the world of Toriko looks. Every piece of food or rare ingredient is given a unique design and often looks quite delicious, especially when the designs are worked into the environment. The same can be said for some of the monsters the gang comes across, as many of them appear similar to animals similar to those found in the normal world, but with monstrous additions or size added to their already intimidating frame. 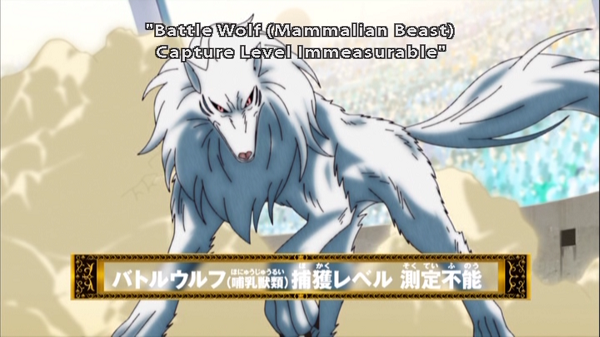 As for the character design, the Legendary Kings, such as Toriko and those revealed later in the release all are well designed for the most part. However it is clear throughout Part 1 that Toei took many short cuts with the series’ animation, especially when it comes to trying to keep the character design quality consistent. Quite often character designs will suffer significant drops in quality for any mid-range or group shots. It is also worth noting that the aforementioned monster designs begin to undergo whatwe call in videogames, palette swaping, which is basically taking a monster design, changing the color and releasing it as a new creature.

Audio:
As standard with a FUNimation release, Toriko: Part 1 features both the original Japanese voice track as well as the newly recorded English dub. The English voice cast this time around actually consists of a few newer voice actors, but a large number of lead roles are filled with veteran voice actors. Toriko and Komatsu are voiced by veterans Ian Sinclair and Josh Grelle respectively and these two have some of the best chemistry together that you can ask for in a series such as this. Their voice work, and most of the voice work overall, is over-the-top at times but this actually manages to fit the fact that nearly everything in the series is over-the-top in one way or another, what with super-muscled fighters taking on gigantic creatures in an effort to obtain the rarest ingredients in the world. 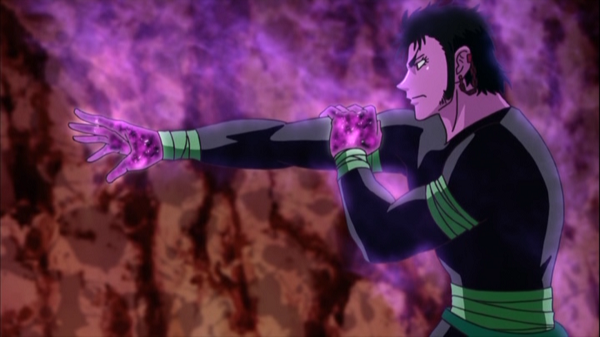 Unfortunately Toriko’s background music can be simply seen as forgetful. In fact, while viewers may remember that there was music playing through certain fights, the background music falls into you’re standard generic shōnen type of songs. As for the title’s opening theme in this first half, we have “Gatsu Gatsu!” by Akira Kushida which opens things in a rather bad-ass way that highlights that the show you’re about to watch is about food and kicking monster butt. As for the ending theme, we have “Satisfaction” by F.T. Island which feels like a rather sub-par closing song for a series as over-the-top as Toriko is.

Extra:
With the release of Toriko: Part 1, we have find a rather standard offering of bonus features which feature a clean version of both the opening and ending song, trailers for other FUNimation releases as well as the US trailer for the anime. Finally there are two episode commentaries provided with this release, one for episode one and the second for episode nine.

Episode one’s commentary features Ian Sinclair who voices Toriko and Josh Grelle who is the voice of Komatsu. Within this commentary we learn why these two voice actors have such great chemistry together and also about their food habits as they both reveal that they are actually foodies that have created their own personal full course menu of real life food. It is worth noting that the commentary does not follow the episode at all, but the chemistry and hilarity of these two put together makes up for that fact. 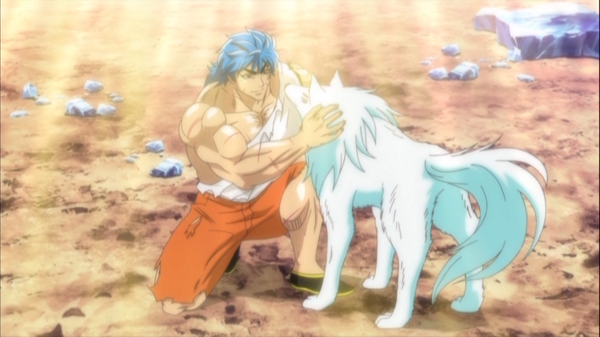 Ian Sinclair returns again for the episode nine commentary and this time he is joined by Leah Clark who voices Rin and the newcomer Aaron Roberts who voices Sunny. Aaron is one of the new voice actors mentioned earlier in the review and his portrayal of Sunny’s unique personality fits the character model and personality well. The commentary focuses more on the episode on the other, but the three continue to talk about food and how they enjoy certain types of food. The group also reveals how they managed to sound like they were eating during parts where their characters’ mouths were full.

Overall:
Toriko: Part 1’s main course is the fact that these over-the-top Gourmets are taking down even crazier looking creatures simply to eat them. Unfortunately this main course is hindered by some rather sub-par animation and a storyline that feels like an unsatisfying appetizer that only becomes truly flavorful when you’ve already consumed half of it. Still, as an shōnen anime, Toriko is bursting with potential for greatness. Whether it will find that greatness has yet to be seen, but for now Toriko: Part 1 may not be worth including in your full-course anime meal.