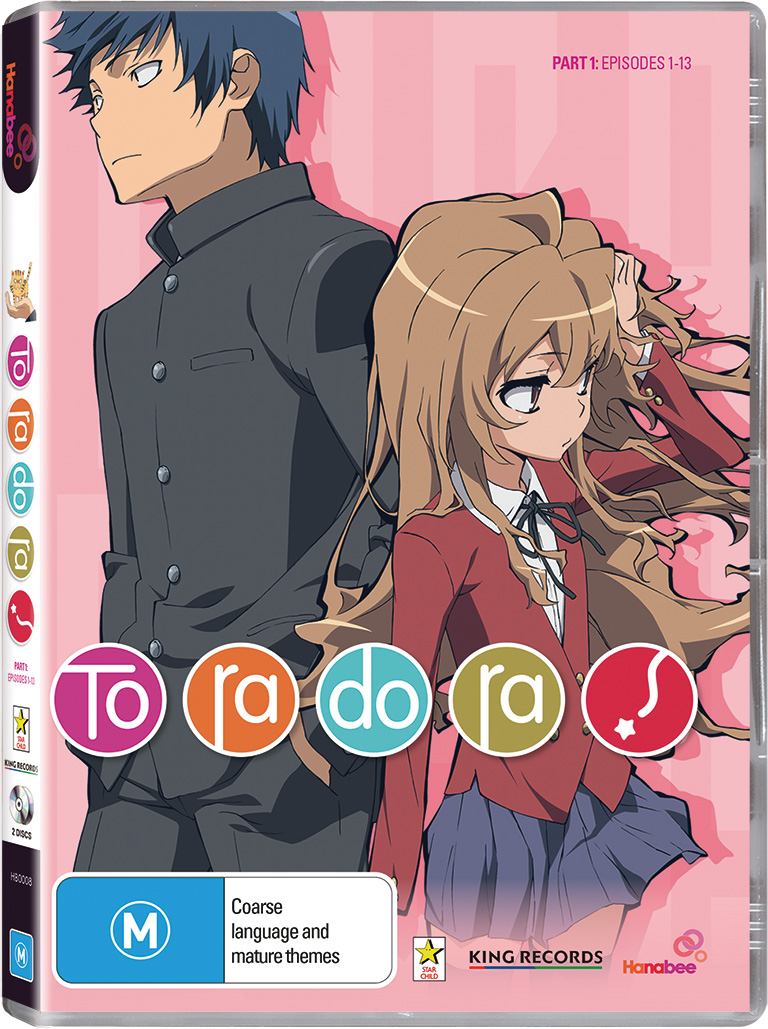 Overview:
The romantic comedy is a genre that most anime fans should be accustomed to by now. It is easily one of the most popular genres of anime but it’s also a genre that has grown stagnant, routine and formulaic over the years with very few true gems in between. Those gems I speak of are series that break the mold and stand out as something truly different and remarkable. Toradora is one of those series. It takes the romantic comedy formula and throws it for a loop resulting in what is one of the most popular anime series of the past decade and also one of the most requested titles for localisation. After so many cries from anime fans to see the series get an English release it has finally made its way to our shores and it’s about damn time. 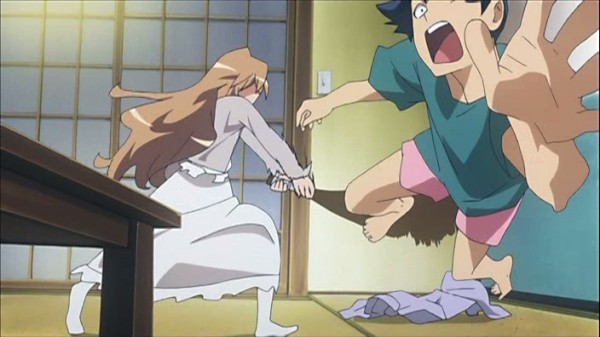 Story:
Toradora can be defined as a slice-of-life romantic comedy anime, but it is so much more than that, it is an exploration into the things that we don’t see and the importance of those invisible intangibles.

All true great comedies have the same things, a colourful and likable cast of characters, genuine emotional beats, storylines that comedy can spring from and a world in which these things all collide. Toradora has all these things. It is both humourous and touching, all the while featuring characters and a world you can become invested in. 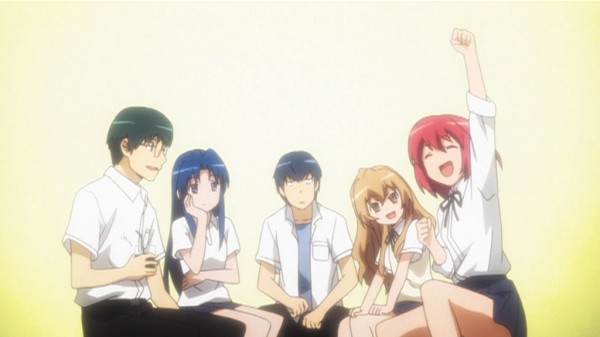 The series plot revolves around a scenario I haven’t seen tackled in romantic comedy anime before, two protagonists helping one another with their potential crushes all the while getting closer and closer to one another. It is a simple concept that works better than it’s simple nature promises. The reason why the story works so well is because it is supported by a cast of characters that you can care about.

Ryuji for example is not your standard male protagonist in this genre, instead of being utterly unremarkable other than the fact that he somehow has a bevy of women falling all over him like most protagonists in this genre, he is a much more deeper character written with great nuance. The thing that Toradora does so well with Ryuji is that it both simultaneously makes him appear to be a potential partner for all 3 of the women in the main cast whilst also showing us why he is also not the best choice for them. It creates an interesting balance that very few series even try to achieve, true unpredictability with the series possible romances. 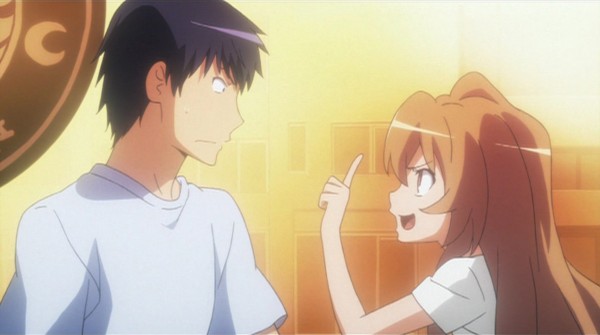 Through this theme we get some excellent character development and some truly powerful moments that definitely struck a chord with me personally. In particular there is a multi-episode story arc in this part of the series focused on the return of Taiga’s father. She is at first adamant about not wanting anything to do with him, however Ryuji does not understand why she feels this way. Of course Taiga is hiding something from Ryuji, the truth about her father. But through Ryuji revealing a little of what he hides (in regards to his own father) he manages to convince her to give him another chance. Ryuji later admits he wanted her to be happy for selfish reasons, in a way to live vicariously through her, because he himself knows that his father won’t be coming back. 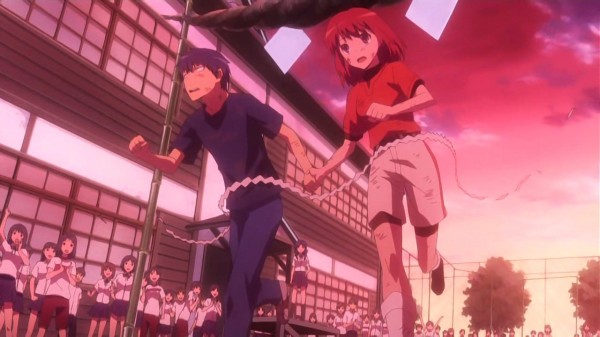 This story arc in particular was so well executed and filled with nuance that I truly began to understand why this is hailed as one of the greatest of all time. These characters are so well conceived  with multiple layers that aren’t so obvious from first impressions and as the series goes on and the characters grow closer and closer, we the audience grow closer with them as well. More and more of what they hide becomes revealed and it is through this that Toradora is truly captivating, people aren’t always as they seem, if we didn’t judge perhaps we would come to see who these people truly are and heck we may even come to like them. This is what Toradora is all about and it’s a theme that anyone who has ever felt the need to hide part of who they are can relate to.

Sometimes there are things you can’t see, but does that mean that they don’t exist? Just like Kushieda’s pondering on ghosts, Toradora as a whole ponders this question and teases drama, comedy and most of all meaning out of it. This is without a doubt a series to behold, there is a reason it is so popular and I personally can not wait to get to know these characters more when Part 2 is released. 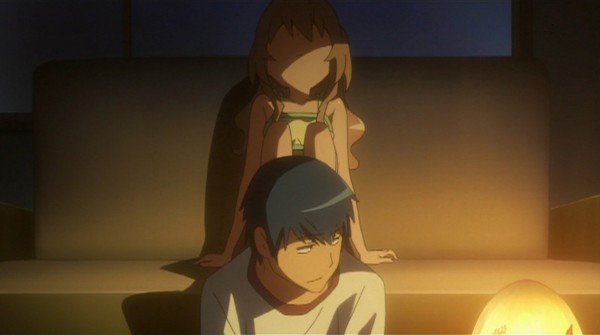 Visuals and Audio:
If you are looking for something visually appealing then you’re in luck with Toradora. This series is absolutely gorgeous and in this reviewers opinion is easily J.C. Staff’s most consistent work aesthically. The character designs are instantly memorable and a joy to watch. The animation overall is top quality and is consistent throughout with no drops in quality whatsoever. It is simply a delightful visual feast.

The soundtrack of Toradora much like the visuals is simply phenomenal. The incidental music is perfectly timed and sets a perfect atmosphere for the crazy goings on of the Toradora crew. The opening theme is downright addictive and makes for what has to be one of the best opening themes of all time. It is instantly memorable and a classic by all senses of the word. The ending theme likewise is great but is of course overshadowed by the brilliant opening theme. Top to bottom it is a great musical experience to behold. Now if only Hanabee could license the soundtrack…

Extras:
In terms of special features this release is unfortunately on the light side with only a clean opening, clean ending and a few trailers for other upcoming Hanabee releases. I was looking forward to a bit more extras with this release but they could always be holding them back for the second release later this year. So here’s hoping that Part 2 will have some more to chew on. 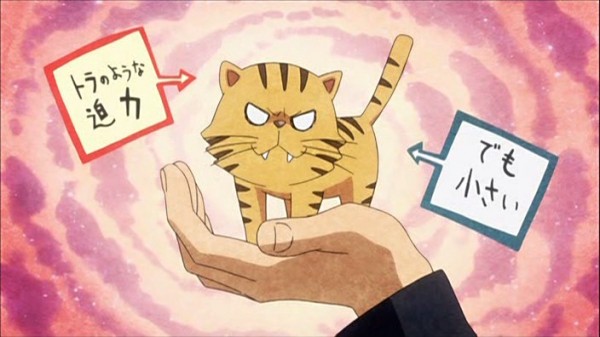 Overall:
Toradora is addictive fun from start to finish with a soft gooey heart underneath all of it’s crazy. If you like romantic comedy series this is the one to watch, it is the height of the genre. If you like series that with make you think, touch your heart and make you laugh all at once then once again this is a series to watch. If you haven’t already done so already do yourself a favor and check out this anime classic, it’s an absolute joy to experience. Believe the hype, Toradora is every bit as good as they say.