iPhone games, like all games can be easily divided into two categories: ones aimed at the casual market and other aimed towards more hardcore gamers. The iPhone seems like the perfect device for casual games, as the lack of buttons and simple touch screen controls make it easy to appeal to all people of all ages. However, there is still a market is cater to that craves for a more than just ‘drag the blocks here’ or ‘tap to pop the bubble wrap’. Recently we’ve seen a genre much loved by hardcore gamers begin to take control of the iPhone device and dominate; of coarse I’m talking about First Person Shooters, many of which are attempting to compete with home console games. However it appears for an FPS game to be successful, it needs to stand out amongst it’s competitors, and in this aspect, Tom Clancy’s Rainbow Six: Shadow Vanguard succeeds and passes with flying colours. As the latest addition to the successful gaming franchise, Shadow Vanguard Implants a unique realistic stealth and tactical element to the gameplay, and easily stands out against it’s competitors, and it’s outstanding graphics, audio and presentation surely gives titles such as N.O.V.A and Modern Combat 2 a run for their money. However throwing so much onto a tiny screen can be overwhelming to some, while others may be craving for a game just like this title. So players must ask themselves ‘how much is too much?’ 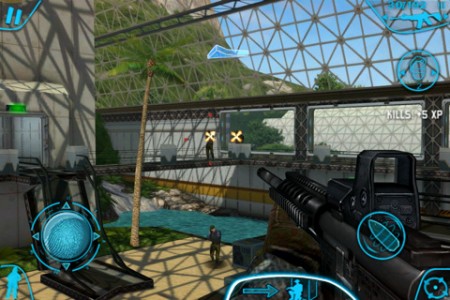 Rainbow Six: Shadow Vanguard is certainly one of the most polished titles on the iPhone device. The cut scenes are to a very high standard, with some of the most impressive voice acting to date on a mobile phone game, presented with details maps and cut scenes with detailed textures and smooth animation. Even the opening menu screen showing off character models and patriotic music really sets the scene and straight away you get the feeling you’re going to play a game that will impress you, and you will. The atmosphere set is next to flawless. Hell, even the loading screen is good, well presented with surprisingly short loading times for such great detail displayed during gameplay. There are a few glitches here and there though, but nothing major. An interesting choice taken from Tom Clancy’s Splinter Cell: Conviction is the stylish inclusion of mission objectives written on various surroundings. This works well and suits the iPhone device perfectly as the objectives are clear and appear in a manner that isn’t distracting from the gameplay. Speaking of the gameplay, it should be noted that the gameplay isn’t perfect, but the presentation of the game in general is done so well that it can be easily over looked. If a glitch or something is to occur, the situation in many cases is saved as it becomes easy to overlook because the atmosphere set by the graphics, audio and design has the player so wrapped up in the game it often becomes easily forgivable. 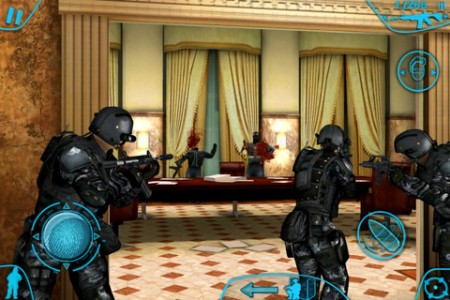 Tom Clancy’s Rainbow Six: Shadow Vanguard plays like a typical first person shooter for the most part, with a few interesting twists to switch up the gameplay. There is a major focus on controlling two NPC’s and devising tactical strategies into combat. At first to many players it can seem overwhelming, but as you go on throughout the campaign it begins to start feeling more and more natural. You can order your team mates to do a variety of manoeuvres that range from ordering a troop to a particular position, clearing a room, throwing flash bangs and disarming bombs. It also contains a heavy on a stealth element to the gameplay, with a few ideas implemented from Tom Clancy’s Splinter Cell franchise. A heart beat sensor shows how aware of your presence so you can take them out with stealth, silence weapons, ‘tag’ enemies to decide who the AI should kill in which order, and use a ‘snake cam’ to see what is behind a particular door and observe where particular opponents are in a room before entering it. Also, your team mates can get injured and will need you to revive them at times, adding to the already rewarding a sense of teamwork in the game. 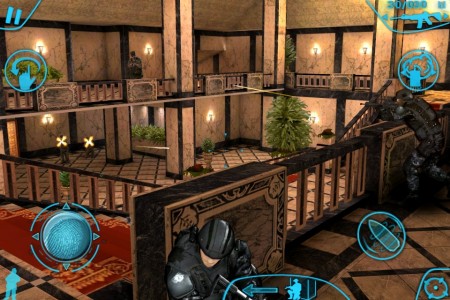 However control schemes range from perfect to slightly awkward. You begin playing by having to tilt the device in order to move the x and y axis of the protagonist. While it is highly responsive and does feel natural, it really is difficult to control and destroys the feel of the game. Thankfully, you can turn this option off and move the camera by swiping your finger, but this is where the next issue comes into play. The need to constantly drag your finger on the screen will occasionally have you accidently going over the fire button, causing your player to shoot, and sometimes either ruining your stealth or just being a nuisance. Still, this is better than having to tilt the device but it still takes away from the experience. With so many options and icons on the screen to silence your weapon, throw grenades, control stick, fire your weapon, running, controlling the AI, and more, it sometimes feels that too many options are displayed on such a tiny screen at once. It isn’t always a problem, but it can take away from the experience. This problem most likely wouldn’t exist if it was a Mac app, or maybe on an iPad, but this isn’t the case here as it is an iPhone review. Furthermore, a big focus is placed on the games cover system, but it is often difficult to tell what you can use for cover and what you can’t. It is nice how the camera zooms out into third person when this does happen, because it really intensifies the experience. 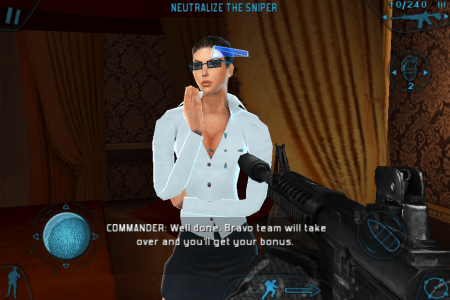 While many aspects of the gameplay do have a lot of room to improve, what is there does have many highlights that shine quite brightly. The level design is done well and is complemented by it’s story, and once players get used to the control schemes, the game can be a lot of fun. You can zoom in with a tap of a button and sometimes upon getting a headshot the camera will zoom in on your victim. Players are constantly gaining XP for their deeds and it can be used to unlock upgrades which really maximise the gameplay experience, creating a strong sense of accomplishment. The game also contains a great co-op campaign mode which works well, and a death match mode which isn’t as spectacular, but it can be played with up to nine other players if you can find them. Shadow Vanguard may have a few small hiccups here and there, but if the player can look past these and give it a chance they will find that this title is actually a lot of fun, and provides a unique gaming experience that can be very enjoyable. 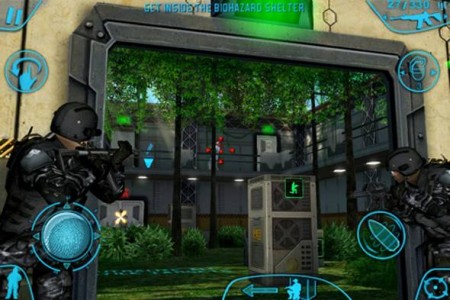 While the gameplay does involve many unique elements to mix up all the FPS action that is to be commended, the greatest selling point of Shadow Vanguard is the atmosphere created by its outstanding graphics and audio. The cinematography seen in cut scenes are some of the greatest out there on the iPhone device, with outstanding voice acting, although the dialogue may be a little stiff at times, and some of the in-game voices aren’t always of the same high standard. Sound effects are spot on and the graphics are nothing short of impressive. The attention to detail is to be admired with almost every surface covered in luscious textures. The occasional frame rate drop may be seen, but only if the player is looking for it as it isn’t very noticeable, and I suppose it is to be expected with a game of this amazing graphical quality on an iPhone device. Anyone familiar with a typical Tom Clancy game will feel familiar with this soundtrack, expect to feel like you’re an actual covert military soldier, because the soundtrack will accomplish making you feel like a deadly, stealthy bad-ass. 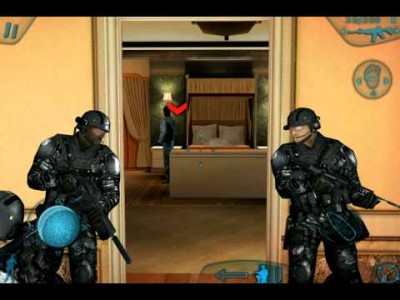 Tom Clancy’s Rainbow Six: Shadow Vanguard is a game obviously aimed at fans of the series from home consoles. It’s a game I’m sure hardcore gamers will appreciate, as it contains a little bit of complexity to it and creates a strong dynamic atmosphere that really sucks the player into the world of the game. Unfortunately these experiences are constantly interrupted by various issues ranging from confusion over where and where not you can find cover, controls that range from great to terrible and sometimes it just feels there is just to many options to take advantage of at once it can feel overwhelming. But stick it out through this and players will find a powerful experience and a great game. It may not be the greatest FPS title on the iPhone, but it almost comes close to titles such as N.O.V.A 2 and Modern Combat 2. A unique game that stands out amongst it’s competitors, Tom Clancy’s Rainbow Six: Shadow Vanguard is a title easy to recommend to fans of the FPS genre. 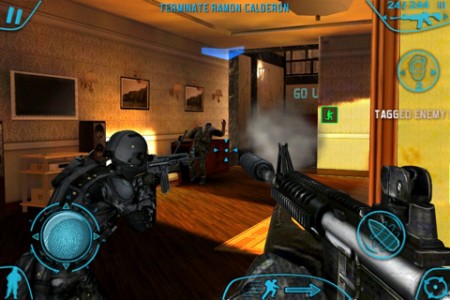