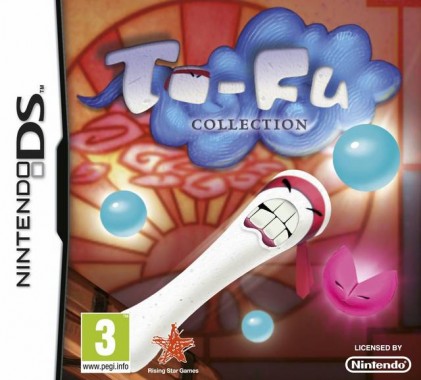 Overview:
Finally, vegetarians have a hero of their very own and one to rival Super Meat Boy. Rising Star Games has compiled the two iOS games To-Fu: Trials of Chi and To-Fu 2 into one easily digestible meat free package. Apparently two constitutes a collection, though with about 100 trials in each game it does still feel worthy of the title. Just about. 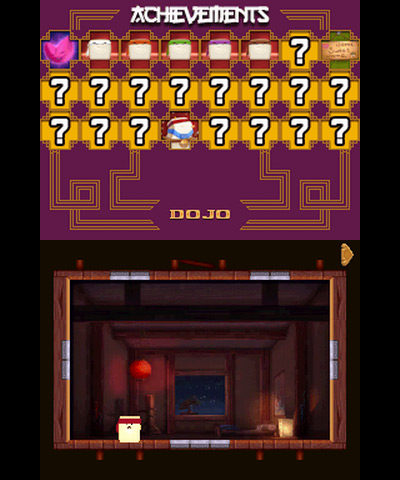 Gameplay:
You ping a piece of tofu wearing a kung-fu headband from wall to wall. What more do you need to know? Testing the tensile strength of the vegetarian-friendly champion – named To-Fu after the foodstuff and his chosen martial arts discipline – you tug the upper half of his body in the direction you want to fling him, release and then watch him fly to the adjacent wall which he sticks to. The aim is to collide with a pink fortune cookie to complete each level, but for completionists there are trails of glowing blue chi to collect on your way through the level and a minimum amount of moves to aim for.

It’s a simple as that to start with, although like any game it introduces new elements to make levels more complicated and therefore even more rewarding to complete. These range from surfaces which change the dynamic of movement like shifting platforms, conveyor belts, glass walls which you slide down and metal plated surfaces which allow To-Fu to bounce rather than stick; to dangers like moving circular saws and spikes. All require precise aim and planning ahead, because, thankfully, as well as using the stylus to ping To-Fu you can drag it over the screen to take a look at what you’re up against.

As you progress, the tolerated margin for error decreases. As the stakes get higher, so too does the need for pinpoint accuracy and quicker thinking, as well as there being a greater penalty for loss given that it’s much more punishing to restart from the beginning of a trial when it was already a challenge to get up to the bit where you failed. 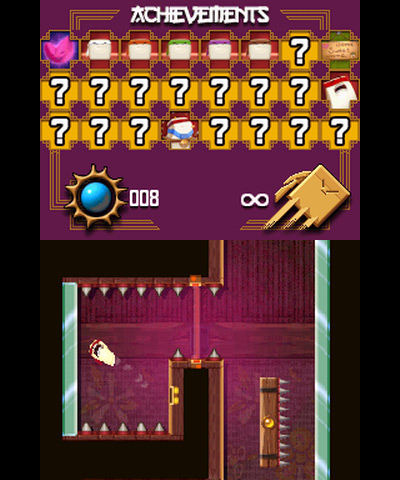 The mechanics are sound as it’s basically a port of the mobile game, but instead of using your finger you use the DS stylus. One complaint that does arise through use of the DS stylus and touch screen is that it’s a little more inconsistent than an iPhone or smartphone, especially if you’re still using the tired old system you got at launch. With something so set on you holding the stylus over To-Fu almost the whole time, running over a dead spot of the touch screen or grabbing the edge of To-Fu and not the main body of the character can result in accidental launches. Still, these are fairly rare, if annoying, and pose more of a problem to those with handhelds with a bit of wear and tear than those opting to make use of the 3DS’s backwards compatibility.

Extras include a list of in-game achievements to work through, bonus levels and a ‘Dojo’ in which to practice your moves. To-Fu also lets you customise the lead character, suiting up in gear like an American football helmet in place of his usual kung-fu belt tied around his forehead.

Visuals & Audio:
Where direct comparisons are concerned, the graphics have taken a hit. The game has lost its glossy edge seeing as the DS is something of a downgrade from the iPhone. It doesn’t impact the game hugely, although a grainier block of tofu, more pixels being visual in your surroundings and a smaller overall display takes away some of the game’s charm, if not much. 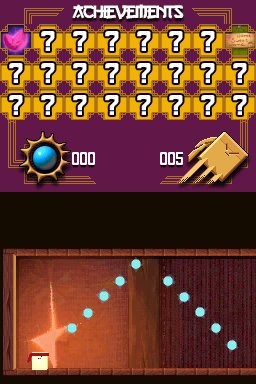 However, added with the fact that the in-game music sounds a hell of a lot worse coming out of the DS, playing on the DS is a noticeably different experience from playing on the iPhone – presentation-wise, on top of the obvious control scheme differences. Ultimately it doesn’t matter – the gameplay is as good as it ever was – but it has visibly and audibly lost some polish along the way.

Overall:
While on paper To-Fu Collection is two mobile phone games sandwiched together and thrown on a DS cartridge, the number of levels and difficulty curve, as well as a certain amount of replay value, mean it doesn’t seem like a cop-out when compared with other DS titles. The conversion isn’t great, with the weak visuals serving to show the difference in power between the DS and the iPhone, but the gameplay is still fantastic. At £14.99 it’s a fair bit above the cost of buying the iOS games separately. But, if like me you refuse to move with the flow of technological advancements to the mobile phone market and shell out for a smartphone, it’s still a good deal where DS games are concerned at half the usual retail price, so don’t feel bad about playing this on your decrepit, ol’ faithful handheld on the smaller screen of the DS.