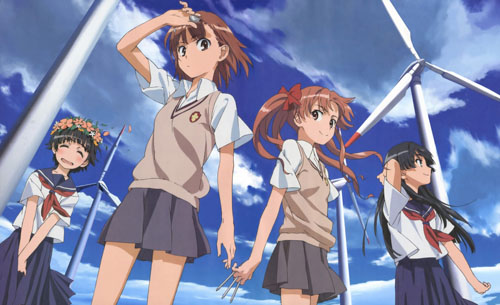 Toaru Kagaku no Railgun may seem a bit familiar to fans of a certain other series. That is because it is the child series of Toaru Majutsu no Index which was produced by J.C. Staff and shown on Tokyo MX. The story in Railgun works as an individual storyline before the events that happen with Touma, making it mostly a prequel work. Then again however certain plot points do cross over with one another. So as you may expect if you’ve seen Majutsu you will be pleasantly surprised.

Half of the series appears to be your typical slice of life Anime with some esper powers thrown in.  The girls will then do what they can to handle the incidents and struggle through them.  This is actually one of the high points of the story as it provides the viewer with more of an emotional attachment to the characters and understand the feelings and characteristics of the heroines.

Despite the Anime being nearly half filler episodes they are actually not horrible filler with zero purpose. There is times that you will only understand what happened in the actual story arcs if you had paid attention to the filler itself.

The time paid to drawing each character is very noticeable. They are very cute and there are no animation errors that caught my eye during my time watching.  In an Anime, sometimes the amount of attention paid to the characters can take away or help the overall enjoyment level and for this one it definitely helps.  The environments themselves that the characters live in are highly detailed and almost appear lifelike  except a hint of Anime flare. However each character suffers the “halo effect.” This is when the character has a circle of light reflecting around their hair looking like lights shining above them, even in darkness.

Characters:
The characters inside of Railgun are quite likable, and if you enjoyed Index then you will also enjoy seeing various recognizable characters.. You will laugh a lot watching their interaction especially in the beginning of the series. As the series progresses there is some character development, like Kuroko becoming a little bit mature in facing her problems. Saten becomes less obsessed with her “level” and realized that she has more precious things in her life. But my major disappointment is with Uiharu. At first she was a character that wanted to do her best to be a good judgment member but in the latest arc her attitude is completely change as she acted so naive and selfish which is a far cry from how she had acted throughout the entire story.

The overall amount of filler in the Anime will take away from the amount of actual storyline progression here.  But there is a large amount of comedy as well.  Couple that with the amount of action happening during the storylines and even during the filler and you have the makings of what has made To Aru Majutsu so great, showing in To aru Kagaku.

Overall I give this