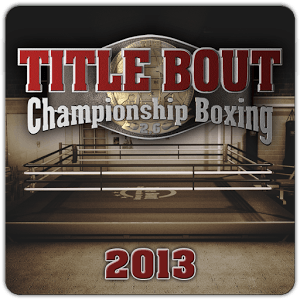 Overview
Title Bout Championship Boxing was an original title released in 2008. Out Of The Park Development has since moved their focus onto their other games, mainly their baseball management simulation. After being sold to P.I.S.D. Ltd., Title Bout Championship Boxing 2013 is now fully available on the PC, Mac, Linux, and mobile platforms. The game doesn’t boast insane graphics or state-of-the-art controls and mechanics, but it does hit the spot for all you boxing aficionado’s who would like to recreate the greatest boxing fights in history or to see what would happen if you could let your favorite boxers duke it out with other boxers during their prime. 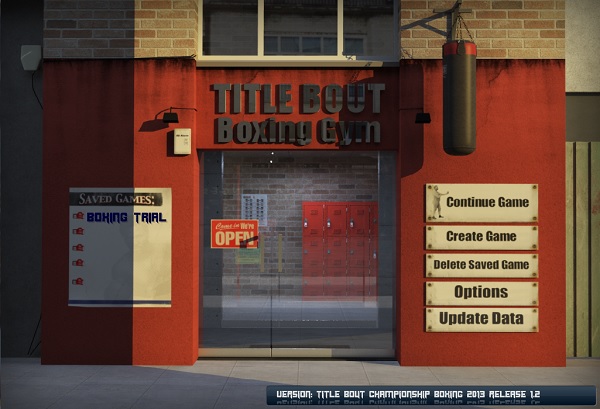 Gameplay
The game does not disappoint on its boxing knowledge and content. Right off the bat, you are given the options to several different game modes and options. The game revolves around setting up situations and match-ups to see how certain boxers do against others. There’s no face punching or button mashing in TBCB. Instead, players will watch their boxers engage in a fight while watching from the sidelines as you read about anything from who took a punch and how the crowd is reacting to the boxers. There are over 6,000 different boxers to choose from, and each one of them have their own biographies, unique stats, and photos to accompany it. You can find any boxer on it, regardless of whether they were one of the more popular boxers or one of the lesser known ones. The game includes a huge variety of names of boxers, but that’s not all. The name of referees, announcers, ring girls, and judges were also included and can be chosen during certain games. 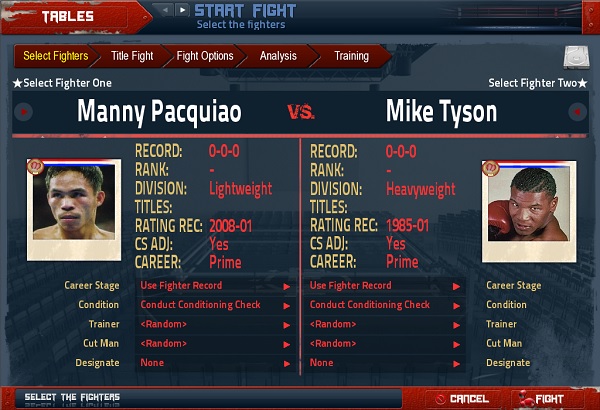 The game really goes into creating an immersive experience for its player. While it may be daunting to get started with the game, it makes more sense once you get used to the style of the game and what the objective is for. The possibilities in the game are endless and it is sure to provide boxing fans and simulation game enthusiasts hours of fun as they try to mix and match certain boxers to see what will happen. Ever wanted to see what a Mike Tyson and Manny Pacquiao fight would look like? Well now it’s possible thanks for TBCB. The simulation aspects of the game is possibly one of its best features, with the other being its huge variety of boxers, refs, judges, and ring girls to choose from. I found myself at the edge of my seat as I watched two boxers that I had chosen at random duke it out in the ring. The crowd has an effect on the character, and if they start cheering for one, it’s noticeable on how they fight. 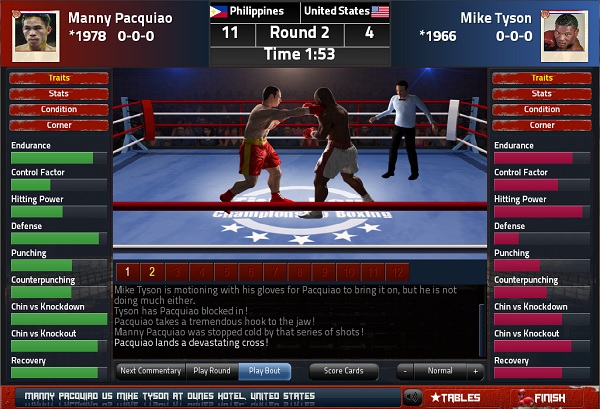 One of my personal quips is that the game is way too difficult for new players who are unfamiliar with boxing. The game doesn’t properly explain everything and it may leave some bad taste in your mouth after you’ve tried it. For example, the referees and judges have their own personal rating and scores, but how does that correlate with the match? Without a tutorial that introduces the different aspects of the game, I found myself floundering around the menus and options, searching for a clue that would explain to me what I was doing. The game is focused on hardcore boxing lovers, people who understand the huge amounts of information being placed in front of them. I personally have never been a huge boxing fan, and it took me a while to really understand what I was doing and why I was doing it. With so much information all packed into the simulation game, some of which may seem a little confusing at first to people who do not understand boxing, the game may seem a little frustrating at first. Veterans of the Title Bout Championship Boxing 2.5 version will have no problem acclimating themselves to this newer game, but for new users who want to set up fights between legendary boxers, you might have some difficulty.

Visuals and Audio
The visuals of the game is nothing to go crazy about. The menu pages looks like you’re entering a gym as you select your game file. You’ll then be taken to a locker room setting where you’re given your different options for game modes. The look is hugely improved from the older version of TBCB. During fights, the boxers on your screen will always be the generic fighters, regardless of what boxer you choose. Occasionally, they’ll make moves or jab at their opponent, a feature that helps keep you engaged while you’re paying close attention to what’s happening. 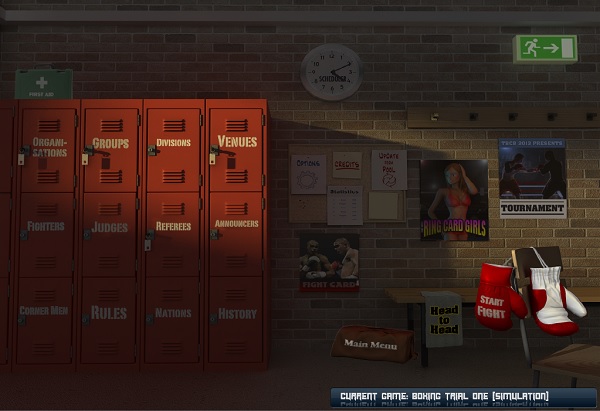 Where TBCB really shines is in its audio. The sounds of punches being thrown and the crowd cheering at all the right moments really create a feeling like you’re at a boxing ring. Every time a boxer lands a good punch, the crowd cheers and you can feel the fight get more intense. The audio really brings the game together and helps draw attention away from certain downfalls of the title.

Overall
Title Bout Championship Boxing 2013 is an interesting simulation game that provides just about everything a boxing enthusiast needs to create the boxing match of his or her dream. While the simulation aspects of the game were great, it misses its mark on user-friendliness. The game has great replay value for its price ($19.99 for two game codes), and is well worth taking a look at. For players unfamiliar with boxing, don’t be put off with the games steep learning curve. It takes a little time to get used to the game and find all the nooks and crannies, but it does become a great little game to play once you figure it all out.