From afar Tiny Farm looks like a Farmville copy turned into an app. It has the animals, the plants, the decorations and the time sensitive aspects of the game, so does Tiny Farm manage to set itself apart from Farmville or is it just one big clone?

The game runs several tutorials in the beginning, rewarding you with experience points and money for completing them, which is nice. The game is fairly simple to pick up, although there are a few different aspects to the game such as four different shops for a range of things. There’s the animal shop, the equipment and decoration shop, the ranger shop, and the plant shop. 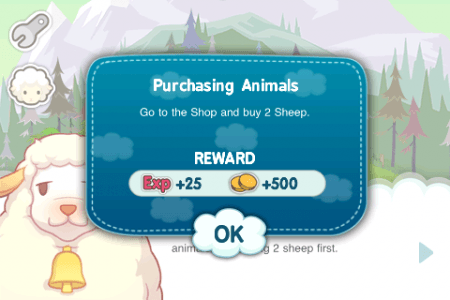 There are bells, love and gold that you have to spend in the game. You use bells to speed up the growing process of plants and animals, however you barely earn them so the main way of getting them is to purchase these with money so once you run out of bells that’s it. You can also buy love with real money, but you also earn them over time. Love is used to make your animals feel all loved so that you can breed animals and also so that they just feel all warm and fuzzy inside. Gold is pretty self-explanatory – it’s how you buy things. You can also buy more gold with real money if you want to grab more money without earning it. 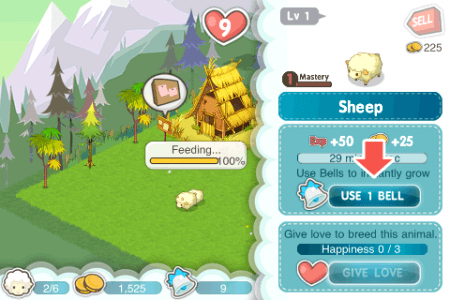 You start off with a couple of sheep and, at the game’s suggestion, use bells to make them grow up and then breed them. For some reason breeding two of the same animals creates a different colour and type of sheep. Not really sure how that works, but you kind of just roll with it. Then you can take this offspring and (once grown up) breed it with one of its parents and create another brand of sheep. Now there’s a definite gross factor with that, but ignoring that this is probably one of the things that sets the app apart most from Farmville. Once you breed your animals enough, you complete each species’ collection and are given the prize of the last breed of the set. 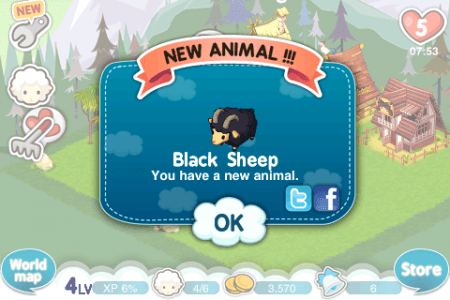 There are also animal rangers, who search and find special animals for you. The downside of this is that most of the rangers are bought with bells, so unless you get yourself a big lot of bells there isn’t much chance of utilising it to the best of its ability.

You have to be ‘licensed’ to own a certain number of animals on the property, meaning that once you reach the limit you have to dish out another couple of grand to be certified to own another animal. This means you either sell your animals to keep it at a constant number, or you let your money disappear every so often. 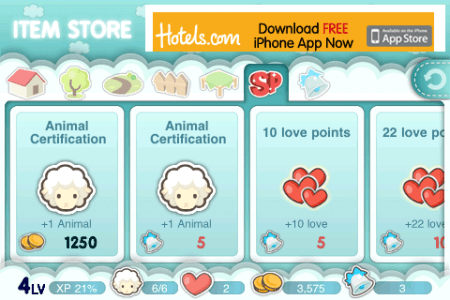 The differences pretty much stop there however. In terms of plants the system is pretty much identical to Farmville. You plant, you wait for a set amount of time, you harvest, so on and so forth. For the impatient people there is alfalfa, which takes a minute, doesn’t cost anything, and sells for five pieces of gold. For those interested in a bit more profit and who doesn’t have the time to harvest and plant every minute, there is a large range of things that make 300% profit and take several hours to grow.

You can also visit neighbours around you and give them a helping hand with their farm that they may have been neglecting which earns you XP and gold for being a good citizen. While in Farmville this worked well because there was such a high amount of people involved in the game, I only had one neighbour and a whole bunch of empty lots around me. This might have been because I’m not playing when the interest in the game was at its peak, but for whatever reason it just wasn’t a useful feature for me. 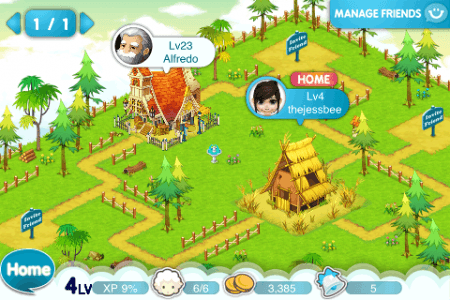 I had the push notifications turned on, which became rather annoying because every time an animal was ready to grow up it would come up as a message, even if it was at 1 in the morning. However, what would be annoying for me would be helpful and useful for someone looking to upgrade their animals as quickly as possible.

The main issue with Tiny Farm is that it lags like crazy. You need to press the screen a few times to get it working, sometimes to even start the game you need to select the start button several times, wait for it to load, have it fail, and then try again until it works. This is something that really needs to be worked on by the developers and patched, because it is one of the most frustrating aspects of the game.

Tiny Farm looks and sounds just like you’d expect from an app based around tiny farm animals and plants. It’s tiny, cute and almost enough to give you a toothache. The animals wander around with giant eyes and hearts over their heads if you show them enough love. 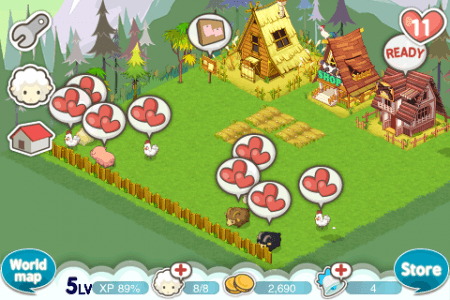 The soundtrack sounds like something out of Disney, with birds chirping and the music cheerfully playing in the background.

Tiny Farm has got the whole cute farm growing simulation down, but the separation between it and Farmville isn’t quite enough. Although the inventive and major involvement in animals is a good step forward but the system put in place in terms of farm management is far too similar to Farmville.

I give Tiny Farm