Time Surfer is the latest game from Melbourne studio Kumobius; the creators of the award-winning platformer title Bean’s Quest. The game is reminiscent of the 2011 smash-hit Tiny Wings with a very specific visual/audio style that screams retro 80s. The ‘End of the Universe’ is coming to consume you, a “trans-dimensional cosmic time God” who is surfing through time in order to escape. Time Surfer may be an endless runner but everything ends. Does the game do enough to stand-out, or is it itself unable to out-run an early demise?…

The core gameplay of Time Surfer is simple, and if you’ve played Tiny Wings before, familiar. Your player character is in constant motion on a 2D perspective and all you have to do is press on the down arrow at the bottom right corner of the screen to dive. Time these dives to achieve the ‘perfect curve’ and propel yourself further and faster. If you make a mistake – say mistime your dive – you can rewind time by pressing on the hourglass icon at the bottom left. The ability is not infinite, as you have a ‘Time Power’ bar that can be refilled by gathering gems. There’s a great ‘Magnet’ pick-up that will suck in all gems within it’s radius that helps to replenish that ‘Time Power’ bar rather quickly. 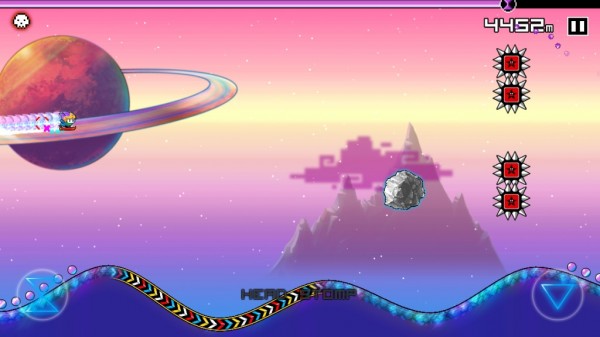 As you race to essentially escape the apocalypse, you will also attempt to mark down your best distance travelled as, unfortunately, death is inevitable. Time and speed pick-ups can be attained to give you that extra edge in. You can compete with friends on the Game Centre leaderboards for the further distance reached. Also, as you are playing, you are given a total of three missions at any given time, which, when completed, will earn you a certain number of ‘space cakes’ that you can put towards feeding ‘pets’. These pets basically enable one-time use special powers that, for example, provide a temporary speed boost or will save you from a pitfall death. The pets themselves unlock as you complete a set number of missions.

There are many obstacles on your path to survival, such as asteroids, aliens and spikes. The asteroids and aliens, however, can be bounced off of if hit on their top halves. There are also ringed planets, whose rings can be surfed on, also providing a small speed boost. Short sections of surfaces may also be painted with multi-coloured arrows which indicate a speed-zone of sorts. All of these elements are encapsulated perfectly in the image above. Aside from the arcade mode, there’s an added, extremely more difficult area called ‘Hell Zone’ which can be accessed and played through at any time. Spikes are strategically placed throughout the level in order to try and stifle the player’s progression. Unlocking the ‘Rock Bug’ pet, which saves you from one spike death, is ideal and it comes in handy here. 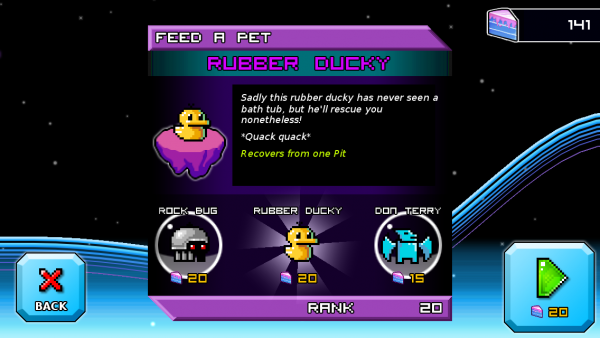 The game has customisation options as well, grouped in the ‘Time Capsule’ sub-menu, which are completely aesthetic options that pay respect and homage to the tropes and aspects of 80s culture. My personal favourites are the Aliens: ‘Future Assassin’ and ‘Xeno Tuxedo’, which are representations of The Terminator and a Xenomorph…in a tuxedo. You can also use a ‘Bean’ skin based on the title character from Bean’s Quest by downloading the free game. Your ‘Flair’ – the trail your Time Surfer leaves – can also be changed. Finally, your statistics and the current mission list are also available to view here, along with the option for in-app purchases of more space cakes. I am not a fan of micro-transactions and try to avoid making them, but later pets will eat through your space cakes, so use them wisely.

The visuals (including the U.I.) are soaked in signature 80s neon blue and pink with some colourfully accented backdrops and objects that really shouldn’t exist in a space setting! Mountains, clouds, a magical-looking tree and … the Fortress of Solitude!? It’s all very psychedelic, and that’s just in the main playground, or zone. The extra ‘Hell Zone’ is aptly bathed in reds with the same background objects, but a whole different atmosphere. The ground, or curves, are no-longer blue, Tron-like, hard-light surfaces, but abyssal black mounds with creepy imagery lining its edges. 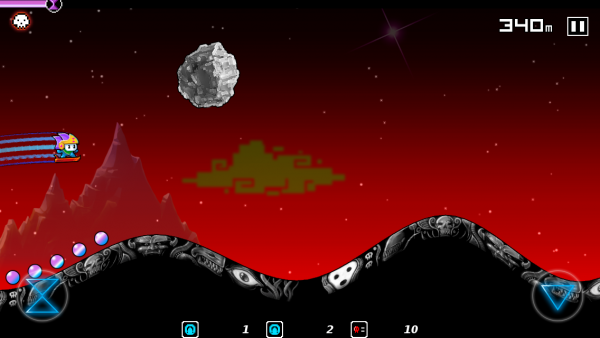 That’s not to say, however, that the main ‘playground’ is at all visually repetitive, as you do travel through dimensions and therefore varyingly designed and themed colour schemes. There’s a black & white theme that features shorter stretches of surfaces with larger gaps in-between them, a rocky, volcanic theme (similar to the ‘Hell Zone’), a green, more organic theme with snakeskin-like surfaces and a couple more. And when the ‘end of the universe’ gets close, it will creep in from the left side of the screen, engulfing everything in the immediate area with it’s bright orange glow, which also obscures the player character and surfaces on that side a little, but not too much that it becomes frustrating.

The characters themselves, as well as the many customisable elements and pets, are sprite-based, with the static images used in the U.I.’s icons derived from that instantly recognisable and nostalgic 16-bit art style. The text is clear and perfectly sized in all areas, with your rank and best distance displayed on-screen in the main menu. Speaking of, the game does a great job of implementing non-intrusive HUD-like elements such as the ‘Time Power’ bar at the very top of the screen, the small skull at the top left that glows brighter and brighter as the ‘end of the universe’ starts to catch up to you, and the current mission objectives icons at the bottom of the screen.

The music was created by Nathan Antony (a.k.a “Derris-Kharlan”), a Melbournite who’s been writing chip-tune music since 2008. His style of composition compliments this particular project perfectly, as the main track heard throughout represents the 80s retro theme extremely well; not only because of the tones and effects used, but because the chip-tune era WAS the 80s…thematically, it just works. The synth-pop/electro sensibilities of the time also shine through nicely. I therefore found it to be in a perfect blend with the visuals in both concept and execution. The sound effects, developed in-house, are equally fitting and not at all jarring, which can sometimes be the case with indie-game sound design. 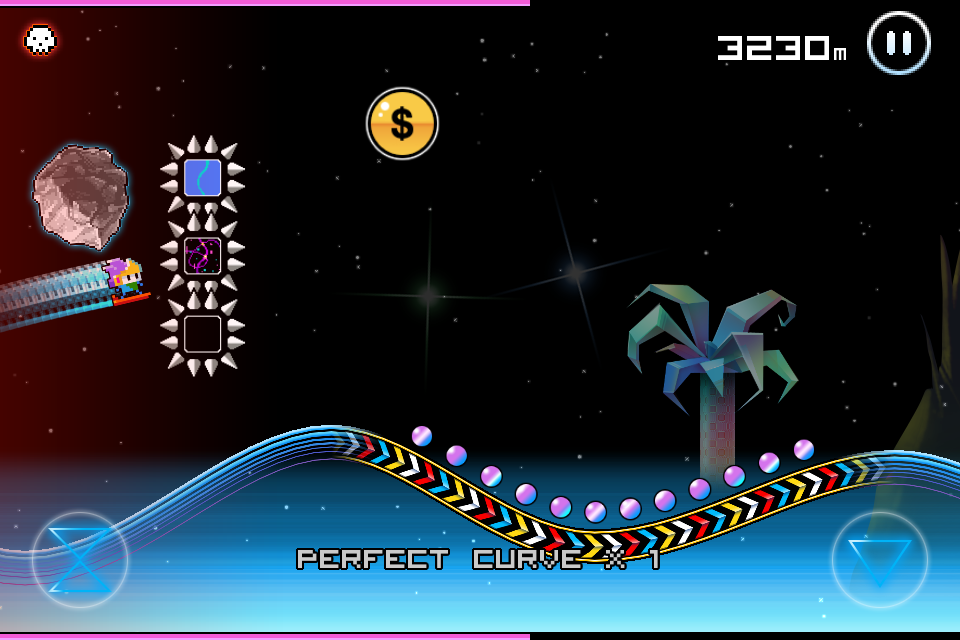 One thing I noticed with the music, more prevalently in the track that plays as you peruse the ‘Time Capsule’, is that the loops do not flow perfectly from end to beginning again. There’s a little hiccup as it completes it’s loop, but that would rarely be heard because you will not likely spend too much time there. And if, for some reason, you must play the game in silence, there is the option to turn off either the SFX or Music, or both, at any time in the main menu screen or the pause screen during play. The ability to track your current missions can also be turned off in the same manner.

The team admit to being inspired by both Tiny Wings (which is clearly evident) and the time-bending Braid, so don’t bother prattling on about how they ripped them off…it’s out of love and admiration that they adapted the simplistic, but addictive feature of physics-based flight through peaks and valleys, whilst adding the time-rewind mechanic found in Braid. But this isn’t a simple mish-mash of other games. It has its own original elements that helps to differentiate itself from, specifically, Tiny Wings.

I found Time Surfer just as addictive, and just as fun. I loved the fact that these added elements, such as the numerous ability/bonus pick-ups, add an extra layer to the gameplay and promote strategy in your traversal as you may dive and aim for a power-up, or a planet’s ring, or an asteroid to bounce off of instead of simple trying to nail a perfect curve if you think it’ll get you further in that situation. All up, you’d be hard-pressed to find another opportunity, ever, to skip across dimensions for only $0.99…you know the future won’t be cheap! Support this great local developer. Buy it, go back in time and buy it again!