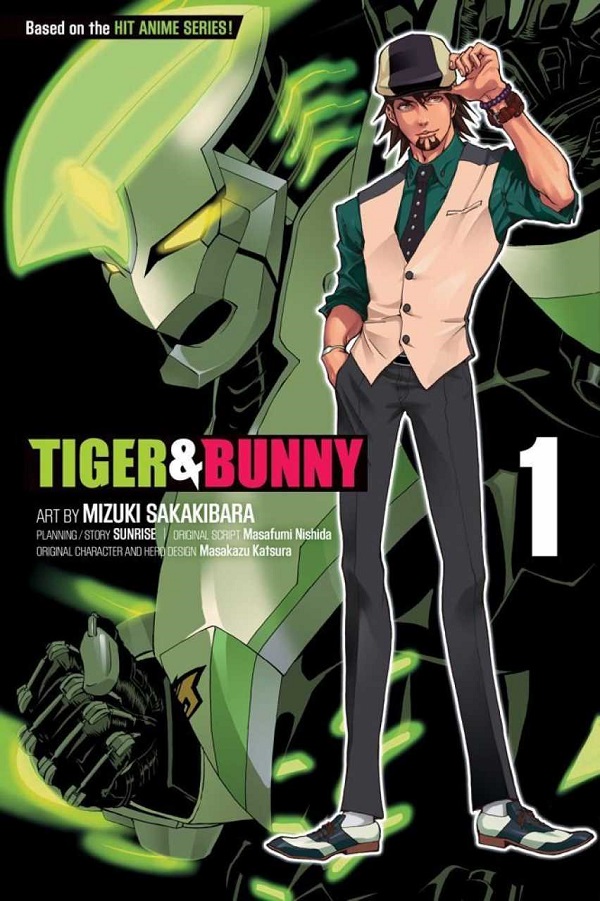 Overview:
The Tiger & Bunny series originally debuted as an original anime back in 2011 that turned out to be so popular that not only are two movies being made for the franchise, but a manga adaptation was created as well. With Viz already releasing the first half of the anime in English, they have now brought the first volume of the manga to North America as well. The question is however, is the manga as great as the anime it was created from?

Story:
In case you happen to be unfamiliar with the series, Tiger & Bunny is set in a world where some humans have begun developing special superpowers. The origin of these mutations is unknown and the people with special abilities such as this are called NEXT. With a number of people developing these abilities, a few of them have turned to crime and what is the best way to take down a super powered criminal? Well with a super powered hero of course.

That is where Hero TV comes in. The city of Sternbild is rife with criminals of all kinds and a number of heroes have been cleared to capture these criminals and turn them into the police and also the ability to enter dangerous situations to save those in danger. The actions of these heroes are broadcasted live to the world and they are ranked via a point system that awards points for capturing criminals, saving civilians and more with a “King of Heroes” title being awarded every season to the hero with the most points.

One of these heroes is Kotetsu Kaburagi, also known as Wild Tiger and although he is a veteran who has been a hero for a long period of time, his desire to act on instinct and put the safety of the people first has placed him second to last in the Hero rankings. To make things even worse, a new hero with the same abilities as Kotestu named Barnaby has entered the scene and he must partner up with him in the first ever hero pair. However with Barnaby set on earning the most points possible and trying to please the fans and become popular, his style of being a hero clashes heavily against Kotetsu’s. Can this odd pairing possibly work well together?

The Tiger & Bunny manga follows the events of the anime almost to a letter. The chapters contained in volume one cover the events of the first two anime episodes which means that it not only introduces the reader to the city of Sternbild and the world, but also a brief intro to each of the heroes. It is worth noting that there are a few extra tidbits added in here and there, but there are also a number of scenes missing, including those that focus on Kotetsu interacting with those around him.

Thankfully the comedic nature of the odd-pairing of Kotetsu and Barnaby still works well in print form and although we are only given a brief introduction to the cast, they are introduced in a decently enough.  While unfortunately short on content, it does provide a nice sampling of what may be the most comic book style manga to be released in the West.

Artwork:
For the Tiger & Bunny manga the artwork is being illustrated by Mizuki Sakakibara and anyone who has seen the anime will be amazed at the amount of detail that has been put into the artwork in these panels. One thing that especially stands out is the fact that almost every panel has some nice detailed background scenery with only a few blank backgrounds here and there.

As for the characters themselves, it is worth noting that unlike the anime; nearly all of the heroes have been scrubbed of their advertisements. Outside of Kotetsu’s first costume which contains a fake company advertisement, almost none of the logos originally presented in the anime have been included in their manga designs. That being said, the characters both in and out of costume are extensively detailed to match their anime counterparts.

Thankfully, Viz has done an excellent job with their translation work and insertion of text. All of the Japanese sound effects have been completely translated into English with no whited out artwork or panels blocked with black text bubbles and any text that is placed over the artwork is cleanly inserted with no white borders obscuring the text.

Extra Content:
As far as extra pieces of content inserted in this volume, there are a number of color pages at the start of the manga, with three color pages featuring Kotetsu and Barnaby and one page featuring the rest of the heroes in their hero outfits.

The manga then closes out with Mizuki Sakakabira’s Image Sketch which has a number of character sketches of Kotetsu and Barnaby some extra character information about them, a small teaser for the next volume and then ads for other Viz releases.

Overall:
Tiger & Bunny: Volume 1 kicks things off well by following the anime almost to a letter and presenting readers with gorgeous artwork. Although a few scenes are missing and a few extra details are missing on the character designs, there are a few new scenes added in. Despite this, there isn’t too much progression here in Volume 1 but it does a great job world building and giving readers a taste of the potentially great content to come.