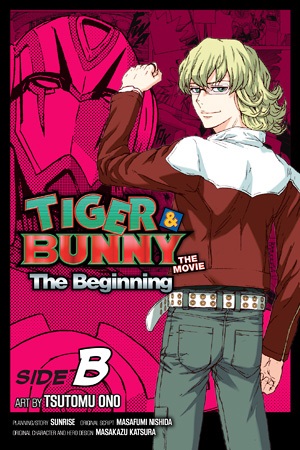 Story
Whereas Tiger & Bunny: The Beginning Side A recapped everything fans of Tiger & Bunny have seen before; Side B immediately takes the story on a different route. Following the events with the NEXT child, Kotetsu wants to try and strengthen the bonds between Barnaby and the rest of the heroes so he attempts to organize a little get together for them to chat.

Not only are we given a chance to see Rock Bison’s NEXT power for the first time, readers are also able to take a glimpse at the other heroes’ personalities before the group became a bit friendlier with one another. After Barnaby’s rough dismissal of the group, the heroes are called to capture a criminal that has stolen the Statue of Justice, a statue which symbolizes the people’s trust in their heroes.

However this criminal also happens to be a NEXT and his ability quickly gives the heroes more trouble than they bargained for. To make matters worse, thanks to Barnaby’s rough interaction with the heroes earlier in the day, the group refuses to work together despite being pushed to the point where the criminal may escape.

Thanks to the new storyline this time around, readers are given a brand new chance to see the heroes in action as well as a new side of them. A few pieces of information concerning Barnaby and Ouroboros are provided and Part B also serves to drive home how, while Kotetsu and Barnaby may not get along, at least Kotetsu is willing to go the extra mile to put some faith in his partner. After wrapping everything up nicely, Part B ends with the heroes being a little closer together and Barnaby actually giving Kotetsu the time of day.

Artwork
As before it is worth noting that the artist between the original manga and Tiger & Bunny: The Beginning has changed and while characters still feature the same appearances, this version of the manga also features more detailed outfits and hero suits. There are no two page spreads in Side B but there are a handful of great looking scenes where the amount of detail put into the characters and backgrounds are delightful.

The various sponsors on the hero suits are still not included and despite being broadcasted on Hero TV, many of the little visual touches that come from that broadcast were not included in Part B. As for Viz’s handling of the translation, sound effects and text translation is clean and does not affect the artwork in the slightest.

Extra Content
Similar to Side A, Side B has no extra content included within the release outside of the cover art that is meant to be paired with Side A.

Overall
Naming these volumes Side A and Side B was an apt choice as, at least storyline wise, they are like night and day. While Side A was almost entirely redone content, Side B’s focus on an entirely new criminal and highlighting more of the heroes and their interactions with one another offers a delightful read. Pair that with impressive artwork and Tiger & Bunny: The Beginning Side B is certainly worth picking up.