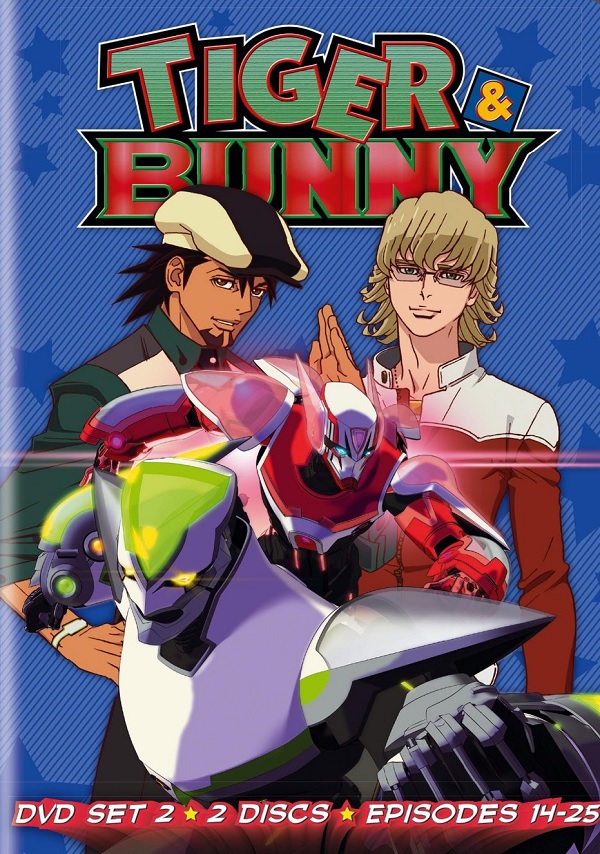 Overview
Tiger & Bunny may seem like a basic series on paper, as it features an odd couple pairing of a fresh super hero partnering with a veteran hero as they take on various crimes while being televised, but despite this, the first half of the series left quite an impression as viewers watched Kotetsu, Barnaby and the rest of the heroes protect the city of Sternbild against the villainous Jake. Now that the heroes have succeeded, what does the second half of the series hold?

Story
Since the capture of Kriem and death of Jake Martinez, ten months have passed and in these ten months Tiger and Barnaby have begun to mesh as a team and work together like true partners. In fact they have worked together so well that Tiger managed to rank in the middle of the Heroes while Barnaby was crowned the new “King of Heroes.” 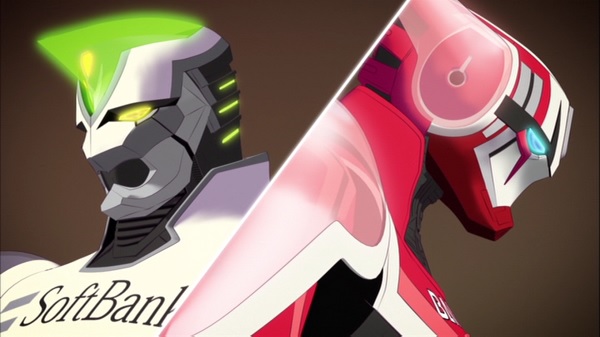 During this time not only has Kotetsu (Tiger) been able to work well with Barnaby, he has earned the respect and friendship of the rest of the heroes and his co-workers. So much in fact that his boss which always said that if he didn’t like it, he could just quit, now begs him not to mention the Q word again. However even though things have been on the rise for Kotetsu and Barnaby, everything that goes up must fall down.

During the initial case in Set 2, which develops Blue Rose and cements her feelings for Kotetsu, Tiger is surprised to find that his “Hundred Power” NEXT ability has made him faster and stronger than ever. But when his powers begin to last for less and less time each time he uses them, a dark truth behind Kotetsu’s personal heroes and a rare condition amongst NEXT is discovered. To make things even worse, when Kriem awakes from her coma she reveals that Jake is not the murderer of Barnaby’s parents. With the real culprit behind Barnaby’s parents’ deaths still on the loose and Kotetsu attempting to hide his condition from his fellow heroes, can this partnership pull these two through even the darkest schemes? 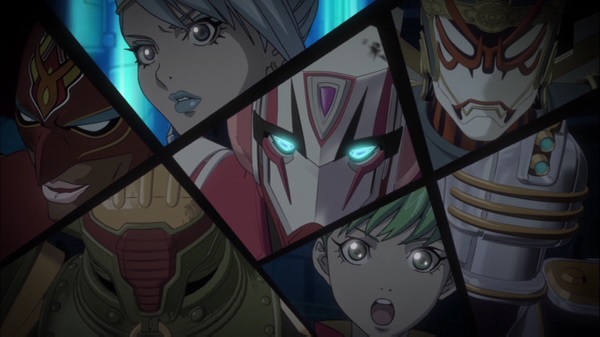 While the first set of Tiger & Bunny may have been a bit unfocused at times and only started becoming special during the Jake story arc, the hero/villain of the week episodes helped build the characters that viewers will now be following throughout the two intertwining story arcs in this second set of episodes. Thanks to the amount of development and the time-skip between releases, the characters are now friendlier with one another and seeing Kotetsu respected by his peers is a great development.

Also thanks to the aforementioned first half, the focus on storyline is clearer in Set 2. There are a few one-off episodes still, but even amongst these there are additional storylines which reveal Kotetsu’s changing NEXT power, a new threat on the horizon or even a change in Kotetsu’s family. Thanks to these developments the second half never seems to slow down and the plot moves at a well-written pace that will be pulling on the viewer’s heartstrings more than a few times, especially when it comes to a certain former King. 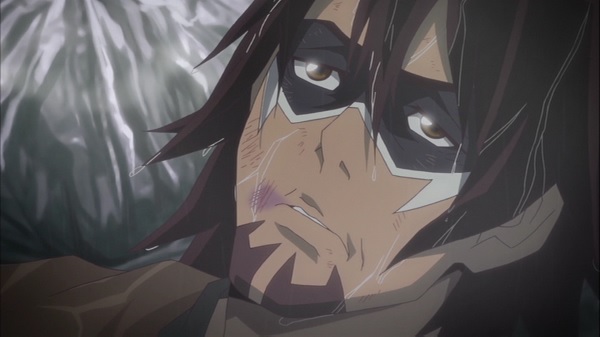 With a decently developed cast of characters, a number of which viewers will care about, the series heads into dark territory that sees the true mastermind behind the events of Barnaby’s parents’ death surface and twist the heroes to his own malicious ends. The final emotional story arc for Tiger & Bunny does wonders for bringing the cast together and closing the series out not only on a high note but with a possibility to continue in the future. As they say a hero’s job is never done and with how amazing Tiger & Bunny has turned out, let’s hope that it doesn’t finish anytime soon.

Visuals
Throughout the entirety of the series, Tiger & Bunny has offered an impressive blend of standard animation and CGI elements that look wonderful. It is difficult to make CGI look decent when paired with normal animation techniques but the animators at Sunrise have managed to pull it off throughout the second half of the series as well. 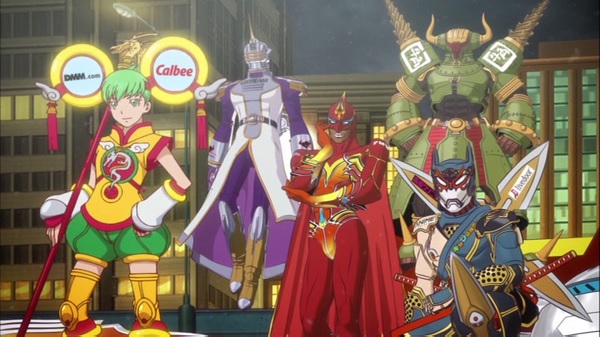 A number of the heroes’ suits are nicely detailed and are well animated and thanks to the amount of action that takes place in Set 2, the series benefits from the studio’s great attention to detail. This detail expands to the world itself as the city of Stern Bild is extensively detailed with impressive landmarks and buildings always surrounding the characters. It is worth noting that the Hero TV broadcasts are a bit limited in the second half but still are impressively portrayed with various scan-lines mimicking those of older televisions.

Audio
I must say that while I did have issues with Wally Winger’s voicing of Kotetsu in the first half of the series, his portrayal as Kotetsu in this second half is wonderful. The character is nicely handled and the amount of emotion that Wally can put into the character really pulls the drama together. As for the rest of the English cast they continue to perform excellently with the characters they are voicing, even surpassing the original Japanese voice actors in a few sequences. 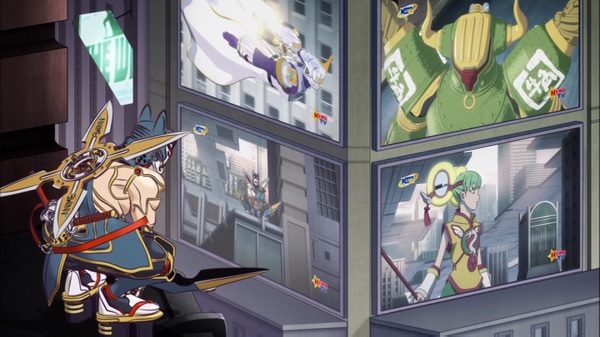 The background music throughout the series continues to be rather standard and a bit forgetful at times, though a number of reoccurring themes do become noticeable and the playing of one of the series’ theme songs during a poignant moment in the final episode is enhances the moment to an entirely new level. New songs and animations have been provided for this half of Tiger & Bunny, with “Missing Link” by Novels as the opening and “Mind Game” by Tamaki as the ending. Both of these themes are worth listening to and are paired to the animation well.

Extras
Being the DVD version of Tiger & Bunny Set 2, this release is rather lacking in the way of bonus features. What is included is rather basic in the form of trailers for other Viz products, the Japanese trailer for the series and the clean opening for the second half of the series as well as the main closing theme and a full-screen version of the final episode’s ending animation sequence. 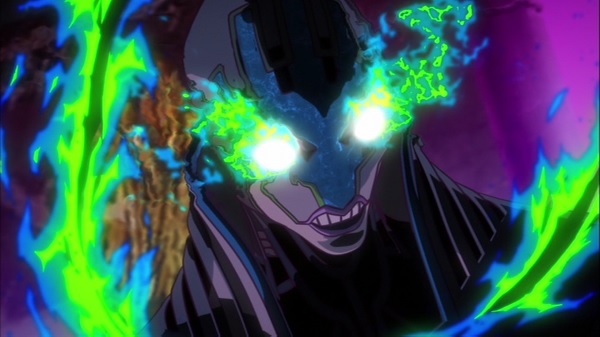 Overall
Tiger & Bunny Set 2 put my concerns to rest over Kotetsu’s English voice work and has capitalized on the first half of the series’ character building to produce a second half that is packed full of emotional moments, tense situations and a few exceptional action pieces. Tiger & Bunny Set 2 may be a bit limited on extra content but the series itself is one that should not be missed. Tiger & Bunny is a rare series that blends a nice chunk of humor, great action sequences, moving storylines, and characters viewers can care about into a series that should not be missed.