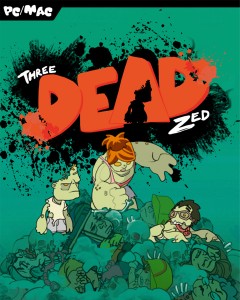 There’s a real sense of pride and love in indie games that permeates the entire product. Since it’s not usually about money, developers have to be working on something they enjoy to keep team morale high, and that often results in a unique concept, or interesting twist on an old one.

Growing up, I loved the classic 2D platformer/puzzle/shooter games like Biomenace, Commander Keen, early Duke Nukem, and The Lost Vikings. Three Dead Zed conjures that kind of feel, putting you in control of a zombie, escaping from the science lab where he was created. This ain’t no regular zombie though: he can swap between three different forms at will, each with different abilities.

One form has retained some motor skills: he can flip switches, pick stuff up, climb ladders and attack. The second is more nimble, able to jump higher and further, run faster, and wall jump, but can’t attack. The third is a powerhouse, with a strong attack and a lot of damage resistance, but limited movement. 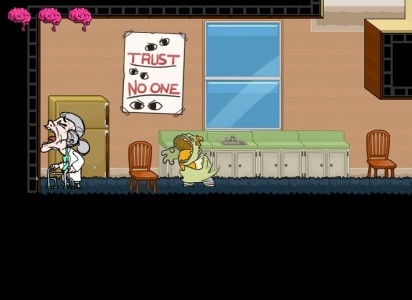 Combining the abilities of all three forms, players must escape the science facility. Oh, and rescue some blue cats in tin foil hats.

The level design is loosely linear, often providing multiple paths to the same goal, and hidden areas aplenty. It makes you feel like there’s always something that you’ve missed somewhere, and I mean that as a good thing. That sense of exploration is rewarded with computer logs, revealing a bit more about the story.

The central mechanic of swapping between forms with different powers translates to a basic lock and key system, but you have all the keys with you all the time. Unfortunately, this limits the potential for interesting puzzles. As soon as you see a wider gap, you just switch to the speedy zombie and jump it. Concrete pillar in the way? Use the powerhouse zombie to smash it. It’s not so much a challenge as it is simply a matter of recognizing which ability you need and using it.

The challenge then comes not from identifying which ability to use, but in the execution. You can see that you need to use runner zombie to wall jump up to a ledge, then you’ll have to quickly switch to tank zombie to attack the soldier there. Timing and precision become key. 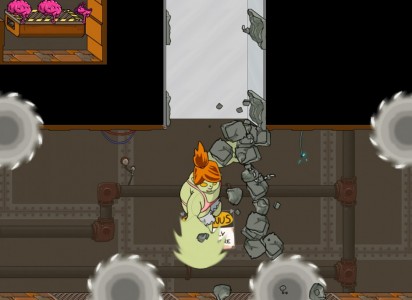 Pixel-perfect jumps and timing can be frustrating, but that’s part of the old-school appeal. Often though, the challenge comes not from the well-designed levels, but from tackling floaty physics,  imprecise triggers, or collision bugs. As such you might find yourself dying without knowing why. On several occasions I found myself insta-killed between an elevator and a tiny lip of another platform I assumed I would miss. These aren’t game breakers, and they might be patched out later, but for now they do detract somewhat from the game.

Thankfully, dying only puts you back to the last checkpoint, without resetting everything.  The persistent levels mean that you’ll only lose distance, not progress, with each death. Unlimited lives are also a welcome addition.

Perhaps one weakness is that the level designs don’t fully utilize the abilities of all three characters. I hardly ever needed the big strong zombie, while almost every jump required the nimble zombie. As such I spent most of my time as the runner guy until I specifically needed another. More chances to put the other abilities to use would have been appreciated. 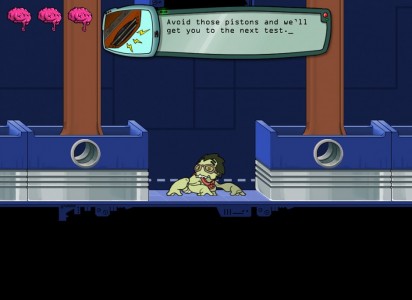 Gentlemen Squid are quick to tell people that the game is entirely hand-drawn, and the result is stylishly imperfect. The zombie idle animations look about four frames long, but not badly so – as a design choice, it works.

The zombies look awesome, oozing character from their gaping head wounds. Next to the stars of the show though, the human scientists lack that special something. Individually the scientist characters look fine, but taken together, they don’t quite mesh right; they look like they belong in other games. To hazard a guess I’d say the differences reflect the input of different artists – it’s a shame that they weren’t combined into a cohesive whole.

Blood splattering across walls adds a nice visual touch. Eating a human will redecorate the walls red; take damage or die and you’ll spatter them yellow. It looks cool, and can provide a visual indication of your success and failures. Finally getting past that laser, where the walls are now completely yellow, makes victory all the sweeter.

Humour is another aspect the team is quick to promote, although it may not play as large a part as they’ll have you believe. That’s not to say it isn’t funny: signs like “Buzzsaw sharpness testing in progress” and “What doesn’t kill you needs a redesign” should elicit at least a chuckle.

The music is practical, albeit a little bland, save for the final level’s escape theme, which is genuinely thrilling. The rest of it keeps you from sitting in silence, but does little more.

The rest of the sound design shows signs of greatness: in particular, the noise the middle zombie makes while attacking, and the indignant meow of the foil hat cats, make me smile every time. 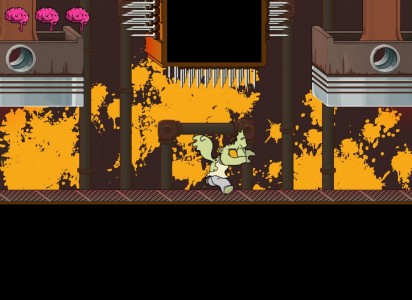 Three Dead Zed is a labour of love, and that love is as infectious as the zombies within. It’s a fine cobbling together of old-school design, stylish visuals and a sprinkling of humour, and despite a few easily forgivable imperfections, it’s definitely worth supporting the team – especially considering the tiny asking price.