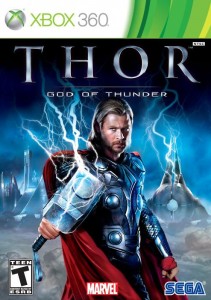 The Xbox 360 & PS3 versions of Thor: God of Thunder were developed by Liquid Entertainment and published by Sega. Now before I get started with this review, I want to say even though I followed coverage for the DS version more before release due to the 2D elements being more up my alley, the console versions of Thor seemed to be full of promise and looked to capture the true essence of the blockbuster film. Sadly, instead of achieving even an average outing for a movie tie-in, Thor fell flat in just about every way. How so you may ask? Here is my review for Thor: God of Thunder for the Xbox 360. 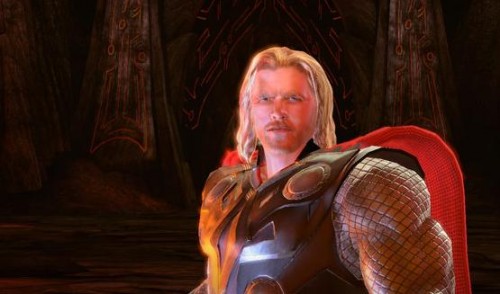 Story
Creating a game from a movie I admit must be a pretty tough chore. You need to set out to represent the character that the movie created while leaving a bit of originality to give fans a never before seen experience. Spider-Man 2 and X-men Origins: Wolverine in my opinion performed this task correctly as both rank up as two of my all time favorites for videogames based on movies. Thor attempts to pull this off as well, but the results just didn’t come out as smooth.

This tale puts Thor on a quest of revenge of sorts after a tragedy takes place that strikes the God of Thunder straight to his heart. Shortly after, Asgard comes under attack and Thor must put his own vendetta aside as he must now save his home from destruction. Odin, Loki, and many game-exclusive characters ripped from the comic books make appearances here, which fans will surely spot quickly. Now the overall direction from the plot sounds fantastic on paper, but it is a tragedy itself due to the hollow characters.

Many of the voice actors from the movie step in to perform their roles in this version of the game, but the pacing and the way the story is told is a complete mess and it honestly feels like the actors were just casually reading from a script to earn a paycheck. I personally rather enjoy the character of Thor, but in this game he comes off as arrogant, unlikeable, and downright hollow. Hollow is a useful term for the other characters as well as I simply could have cared less and following the narrative became downright confusing due to all the bizarre additions thrown in. At times, cutscenes try to portray a bit of emotion to pull you in, but it feels like all the pieces of the plot were just thrown in a timeline and pasted in, leaving no real way to truly immerse the player into the actual story. 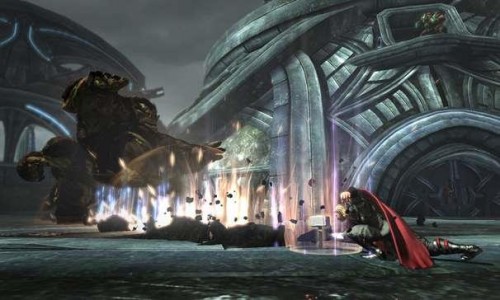 Gameplay
With a very lackluster story, gameplay would be the key element to redeem Thor, but instead it made me look forward to the cutscenes as I just wanted it to end. As he should be, Thor is equipped with his legendary hammer, the Mjolnir. To attack an enemy, you simply hit the X button and Thor quickly pops the foe, dishing out a mild amount of damage. Tapping multiple times as well as mixing the Y button into the equation results is a combo that eventually leads to a much more powerful final result. I am not a bad button masher, and I have played quite a few GOW-esqe action titles (which this game presents itself as), but I literally thought my controller was broken and switched just minutes in as command inputs are heavily unresponsive. The first attack usually hits right off, but instead of following up with the attack, Thor just sat there taking damage instead of listening to the input I was pressing. This doesn’t happen every time, but the unresponsiveness with the controls happens way too much to actually enjoy combat whatsoever as it simply threw me out of the whole experience.

The collision detection is also off. I had times where I was right on top of an enemy, smashing away with no hit being delivered. Thor also enjoys pausing after nearly every move due to animation problems, leading to even more response issues. Thor does have a wide array of techniques to learn however, from throwing the Mjolnir at an enemy, summoning lightning bolts, and a plethora of other elemental attacks. These all can be upgraded and oddly enough, the structure behind this is in depth and allows for a lot of option to be added to enhance abilities. Even with this though, the lack of a smooth or even playable combat scheme drain all of the thought added in by the developers. It’s a shame too, as if the combat actually worked well, I really don’t think the game would have been a repetitive trip. Don’t get me wrong…it is repetitive, but that is mainly because it is too much of a chore to actually perform other abilities. 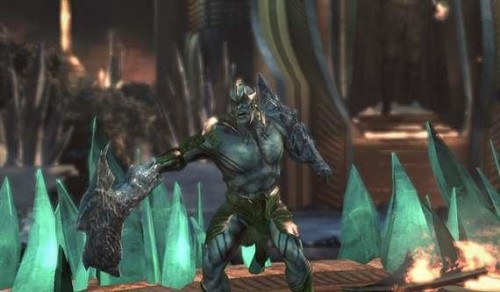 With all of the elemental powers in the game, none are truly fulfilling coming from someone who is labeled the “God of Thunder”. Thunderbolts come off feeling weak and so do many other attacks in the game. On top of this, the bar for Thor’s special abilities is tied to just about every other move aside from the combos and melee attacks Thor performs, and since it quickly drains, that is exactly what you end up using for most of the experience. Grapples are useful at times as they can lead to a quicker finish, but the small time window used along with the response issues lead to the same grapple finisher being performed most of the time. Larger enemies can be climbed as well, but the quick time event used doesn’t work as well as it should due to…well, you get the idea.

Even though the combat was frustrating and agonizing, my biggest problems with this game came in the level design as well as the way the game actually pulls you from one spot to the next. Each area is set up in a linear way, where you are literally dropped into a spot and have to defeat all of the monsters at hand before moving on. Instead of actually moving on though by ways of exploration, the game literally rips the steering wheel out of your hand and takes control itself. For example, if you need to fly to another area, you press one button and Thor takes off and flies by himself, even if it is a short distance. If there are many obstacles in the way, one button yet again triggers a small sequence in which Thor uses his powers to destroy the roadblock. This makes for quite a bit of frustration as I felt I was a bit cheated as watching Thor perform many of the most interesting techniques in the game is certainly no replacement for actually performing them yourself. If I am a powerful God, can I at least feel like it?

Graphics/Audio
I didn’t really have an issue for the character models used in Thor, even if they do look a bit dated. What I did have an issue with however was the environments. Everything feels bland and boring and the pasty colors make each area mesh into the next, killing the variety. Lightning and elemental attacks all come off as dull visually and added no incentive to actually want to see them performed. I also noticed a few graphical glitches as well a jumpy framerate while performing tasks as simple as walking. At times, you can see a bit of detail into simple objects such as Thor’s cape and facial expressions, but those small moments are buried underneath the plain and jerky presentation presented. 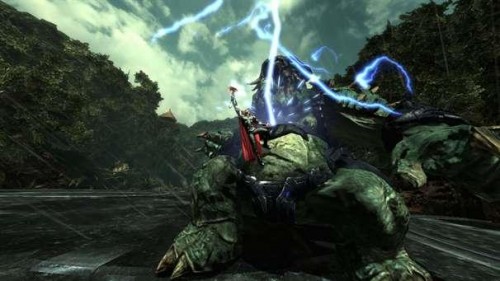 The music in Thor is by far the best part of the game. The soundtrack can make each battle seem huge and on an epic scale, which honestly is a bit of false advertisement in this case. Voice acting however is a mixed bag and as I mentioned, the actors just seem to be half-performing with their lines which leads to each coming off as one-dimensional. The sound effects are yet another problem though, as instead of hearing a loud smash when Thor pounds an enemy or a loud crack when thunder is shot down, a much more subtle approach was taken with every weapon coming off soft and at times I wondered if I even had hit the enemy to start with.

Overall
Thor: God of Thunder is simply underwhelming and lackluster in nearly every way. Framerate issues, collision detection problems, glitches, the lack of proper button response, and many more negatives just leave this title feeling like a total cash-in and rush job. Movie tie-ins are known for feeling rushed, but Thor is borderline unplayable at times and is sure to cause a lot of frustration to any player who picks up a controller to become their favorite Thunder God. Buried underneath all of the problems, I could certainly see a little bit of depth that Liquid Entertainment added in, but since you can’t truly enjoy the game, all of the thought and ideas behind Thor become useless. I really wanted to enjoy myself as even if this title was average, it could have been enjoyable to an extent. Sadly Thor’s first console journey is not a pleasant one to experience and fans of the franchise may have a better time just investing in the handheld version of the game.