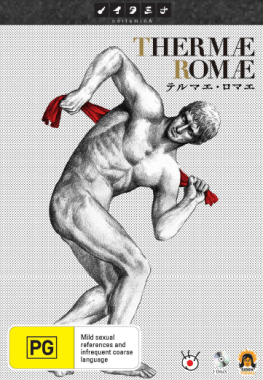 Overview:
Thermae Romae is weird. There is no two ways about it. This is an anime series that bathes in it’s own oddity and takes pride in doing so. Because of it’s inherent bizarre nature, it makes for a very difficult series to recommend. You will either love it or hate it for all it’s quirks. There is really no middle ground. There is one thing for sure though, Thermae Romae is hilarious, not because it’s weird but in spite of it. 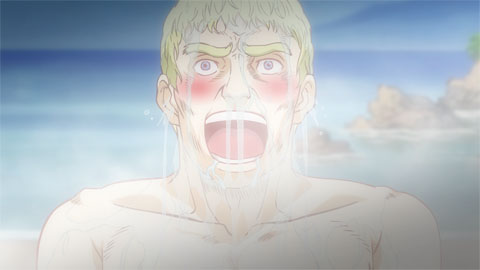 Story:
The plot of Thermae Romae is relatively simple but simultaneously completely preposterous. Revolving around Roman bathhouse architect Lucius as he tries to come up with new ideas for his creations, Thermae Romae turns a conventional story into an absolute absurd time-travel tale with humour abound.

It’s hard not to laugh at how ridiculous this anime is. It is weird but the humour doesn’t directly derive from that, instead opting for a more dead-pan style with the jokes rolling out from Lucius’ reaction to the bizarre modern day Japanese bathhouses. The concept doesn’t really give much leeway for too much of a story to tell and weighing in at a measly five episodes, that is incredibly obvious. By the time the fifth episodes credits roll it’s clear that they had stretched the concept thin very early on into the series run, with it’s high point coming in it’s first episode in fact, everything after feeling like the wheels spinning aimlessly.

That’s what Thermae Romae ultimately is though, despite how funny it may be, there is really not enough substance for it to be engaging beyond the first episode. The idea behind the series comes undone far too quickly revealing a severe deficiency of plot to support even the three episodes that actually aired on TV. How they managed to squeeze out those two bonus episodes is beyond me as there doesn’t seem to be any real momentum behind any of the situations, with all of them feeling like retreading ground from the episode before it.

Thermae Romae is an odd case as the series was seemingly a last minute replacement in the noitaminA block back in January this year. With only five episodes, the series is pushed to it’s creative limits and the humour very quickly becomes strung out and tiresome. The concept itself appeared to have more potential than it really did, which is a shame as it did seem promising as a quirky comedy series. Despite that though there is some enjoyment to be drawn from Thermae Romae, it’s not much but it’s something. 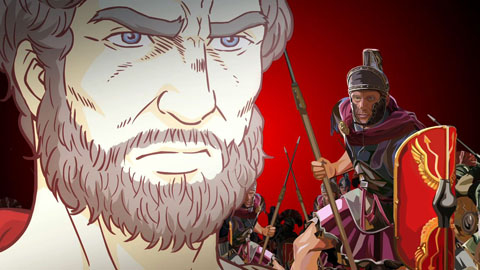 Visuals and Audio:
In terms of visuals, Thermae Romae seems very out of place in the anime landscape instead sporting a look that would be more at home among the adult swim comedy line-up. On top of that the animation is very weak. There is next to no fluid animation whatsoever and in its place is a lot of still frames of the exact same shot of a characters face that is repeated in nearly every scene. It’s cheaply made and that is resoundingly apparent. Thermae Romae is not a appealing series aesthetically but it is a funny one. Some of the shots are just hilarious because of how stupid they look. Take a look at the screenshots in this review for example. The expression you see on Lucius’ face never really seems to change too greatly outside of the standard three looks he has and the transition between those expressions is animated so poorly you’d think you were watching a still frame dating sim with wet naked Romans.

The soundtrack of Thermae Romae isn’t very memorable, featuring an OP and ED theme that do not suit the series at all. On top of that the incidental music is rather grating and becomes frustrating very easily due to its repetitive nature. There is not a lot of creativity in the soundtrack which is disappointing as a bizarre series like this could have pulled off something offbeat and out of the ordinary. It’s a shame that DLE opted for something more conventional and monotonous. There could of been some very creative and interesting things done musically for this series but DLE took the lazy route, a decision that was undoubtedly a mistake. 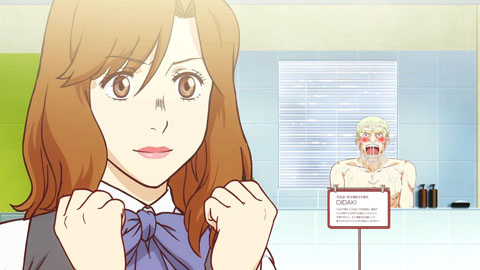 Extras:
One of my major gripes with this release is it’s minuscule amount of content. Now it does contain two unaired episodes which brings the episode count up to five, there does not appear to be any other special features on disc, contrary to what Siren Visual’s website states. I searched the DVD to find the alleged ‘TV Spots’ and ‘trailers’ but found nothing of the sort. This is rather disappointing considering this release only contains five episodes. Some bonus content no matter how insignificant would have been appreciated. But due to the bog-standard contents of this release it is very hard to recommend even to fans of Thermae Romae. 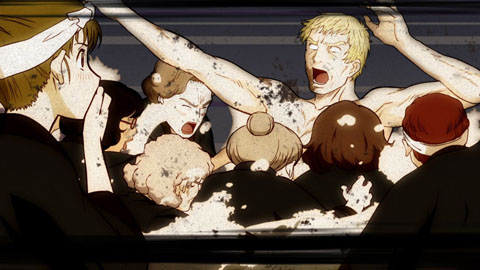 Overall:
It is strange that Thermae Romae even made it to air in Japan. It is an incredibly short series focused on an incredibly specific and oddball topic that really doesn’t develop into anything. If it hadn’t been for Black Rock Shooter being delayed it’s hard to say that Thermae Romae would have ever been made. Regardless of all that though, it is a fun series despite its numerous issues. This release contains the three aired episodes as well as two that didn’t air, but that is it. If you aren’t a hardcore fan of this series I can’t really recommend this release as the price is pretty steep for the amount of content on disc and the series itself is nothing to write home about. It’s weird, it’s badly animated and it’s sense of humour comes with a side of cheese, Thermae Romae is far from the quality that we are accustomed to with Siren Visual. But as they say, there is an audience for everything.