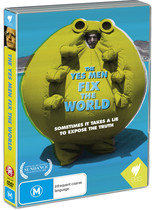 If ever there was a group of people who make you laugh while at the same time make you question society and the way it is constructed, it’s The Yes Men. You’d be forgiven for not knowing who these two pranksters are before picking up the DVD, but afterwards you sure as hell are going to love them.

The Yes Men Fix the World is a documentary that is poorly made, cheesy, and everything that would make students in film school cringe…and that’s what makes it a wonderful film to watch. The Yes Men don’t attempt to hide the fact that they had a small budget; instead they use it to show that even people with very little money can affect the world in a big way.

The Yes Men are two guys, Andy Bichlbaum and Mike Bonanno, who are out to make a difference. Initially, they make false websites for large corporations in order to get invited to conferences and events, but when the BBC contacts them and asks for an interview, The Yes Men truly see an opportunity to change the world. After this comes a whirlwind of pranks at conferences, and an exposure of some of the largest issues plaguing the world today. 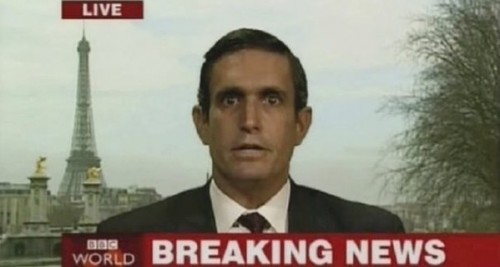 It’s easy to see how the narrative can be extremely engaging – after all, who doesn’t love a bunch of pranksters screwing with the large corps? You have to commend these guys: while it would be hard to string together a bunch of different, unrelated campaigns together into a coherent narrative, The Yes Men managed to make the structure of the film flow very nicely. Each prank somehow transitions onto the next, even though they jump from the Bhopal disaster in India to Hurricane Katrina to general wars against greed.

With that being said, the film has no conclusive ending and may leave you with an unsatisfied feeling – I stared at the screen for a second and said “that’s it?” While it’s a subtle reminder that fixing the world is a task The Yes Men will never complete, it still would be nice to have some sort of concrete conclusion to the action. None of the campaigns really had in-depth follow ups either, and it is never known if The Yes Men were (for the most part) ignored or if they just chose not to include what happened afterwards.

The two main characters in the narrative are The Yes Men, Andy and Mike. Andy is the one that carries out most of the pranks, and Mike seems to deal more with the administrative side, but both act as narrators as well as characters in the film. While what they do is awesome, unfortunately the characters themselves are very flat and boring – and if that was for a particular effect, it wasn’t very effective. When they did speak as themselves instead of as their persona (which wasn’t very often), both seemed very rehearsed and even the beginning scene where they introduced themselves seemed quite forced. In the beginning, it was funny in a Flight of the Conchords-esque style, but after a while it just became bland. 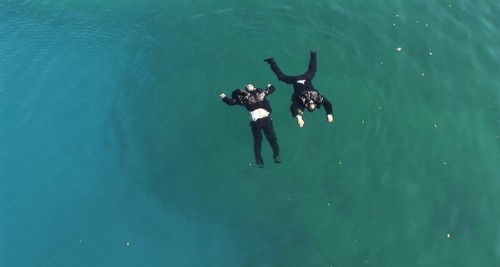 However, the characters that were truly frustrating were those in the corporate bodies. If you ever needed an eye-opener to the coldness of some people in the world, The Yes Men Fix the World is proof that, more often than not, people in business care more about money than other humans. These people are meant to disgust you and shock you, and believe me – they will.

Just a note on being shocked though: The Yes Men Fix the World did have some interesting characters to support their cause, and I was quite surprised at who they chose to show on camera. In films, you have to remember that each scene is selected for a reason; many people who appeared on camera speaking out for The Yes Men appeared less than trustworthy. While it’s great not to judge based on appearances, these people really did impact the credibility of their cause.

As I mentioned before, the film is not what I would deem a visual masterpiece. The effects largely look like they were made using iMovie or Windows Movie Maker, some of the shots are low quality (although often this is justified because they are filming incognito), and the cinematography is virtually non-existent. However, this adds to the notion of two men trying to fix the world with any means they had: if they could afford to pay fancy cinematographers and didn’t film guerrilla-style at points, their entire cause most definitely would have been questioned. Also, the visual elements make for some extra laughs at how odd or quirky they are – after all, when you move from one person’s face to another using a whirlpool-esque transition, you just have to laugh at how weird it is. 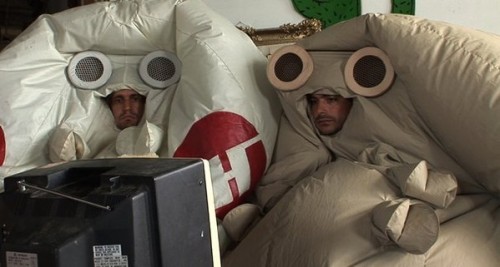 The audio is better than the visual from a technical perspective, but is quite exaggerated at times to both emphasise a specific moment in the film, and to add comedic value. While no particular tracks or moments stand out, the soundtrack is aptly chosen and really works with the narrative and characters in the overall scheme of the film.

The DVD comes with no extras – yes, I was very upset. It would have been great to see the pranks included in their entirety as an extra, as opposed to having to watch them through the narrative. Also, with productions like these there are tons of bloopers; for guys who are such big jokers, I’m amazed they didn’t provide at least one reel. Lastly, it would have been great to see some more reactions from people towards their pranks; unfortunately, the film is all you get with this one.

The Yes Men Fix the World is a funny, eye-opening film that will make you see that fixing the world isn’t as serious as it seems. While there are some shaky elements in the documentary, overall it will have you laughing, inspired, and waiting to hear more about these guys.