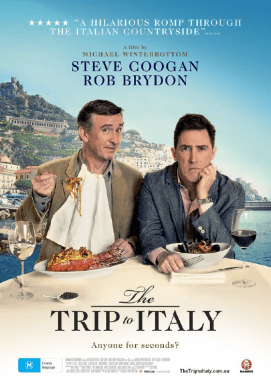 Rob Brydon and Steve Coogan are back for another round of impersonations and silly banter, taking off on a tour of six Italian restaurants with naught but an Alanis Morissette CD and each other for company. The film is a follow up to 2011’s The Trip, and like its predecessor was originally a six part television series that has been edited down into two hours of cinema by returning director Michael Winterbottom. Brydon is best known as a comedian and TV panel show presenter in the United Kingdom, whilst Coogan has more of an international reputation thanks to Alan Partridge and a recent Oscar nomination for Philomena.

The two comedians play the slightly fictionalised versions of themselves first seen in 2005’s Tristram Shandy: A Cock And Bull Story, which was also directed by Winterbottom. The plot is a carbon copy of the previous film, with The Observer newspaper once again commissioning the two to sample a selection of restaurants, this time in Italy instead of north England (can’t have been that hard a sell for the actors). 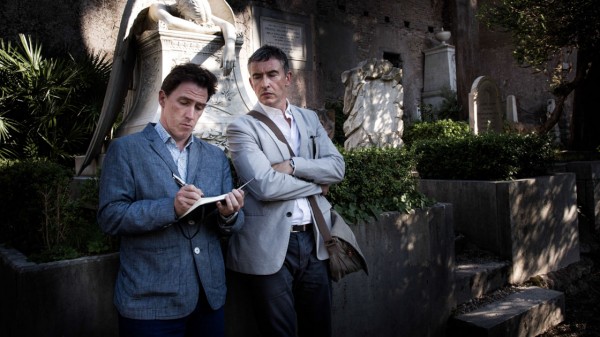 There’s some allusion made to the two retracing the steps of Romantics Byron and Shelley as they eat their way around the country, but the plot is really only there to give Brydon and Coogan the chance to show off their improv skills. Every car ride, meal, or glass of wine kicks off a conversation where the two are free to let rip with gags and impersonations galore- there’s even the odd comment about the food. Michael Caine returns (of course) this time bringing Dark Knight Rises co-stars Christian Bale and Tom Hardy with him,  that particular meal ending in an absurd role play where Coogan’s AP is trying to convince both Batman and Bane that no one can understand a word they’re saying.

The Italian setting gives Brydon the excuse to unleash Brando, DeNiro, Pacino et al, with Coogan largely playing the straight man but diving into the absurdity every now and again. The impressions and pop and film culture references may dominate but there is the odd fantastic one liner- “Where do you stand on Michael Buble?” Brydon asks, “On his windpipe?” replies Coogan. 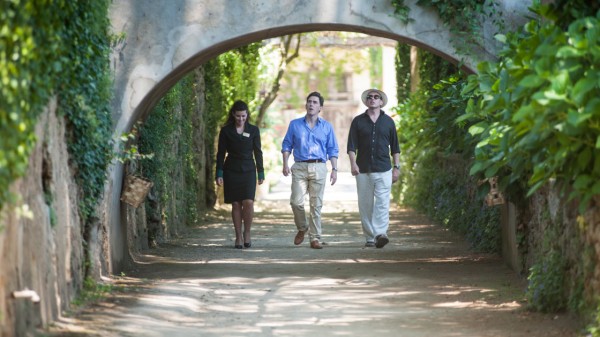 The comedy relies on a lot of references and impersonations, and whilst the quality of the gags isn’t in doubt, certain audiences may find themselves out of the loop on some of the older film references or those more local to the UK (Ken Bruce anyone?). The chemistry of the two leads and some of the sillier banter are an enjoyable watch regardless, but it’s fair to say that those of a certain vintage will get more out of this film, and cinephiles will also be more than happy.

Coogan was certainly the focus of The Trip, but here it is the lesser known Brydon who deservedly gets more of the attention. The jokes and the voices and the impersonations never stop coming, and he’s responsible for some of the funniest moments in the film (the comedic potential of “kumquat” and a conversation with a dead Pompeiian leap to mind). Coogan is still a match for him with his constant one-upmanship and grimaces, and there’s no denying that the two have something of the old married couple about them. 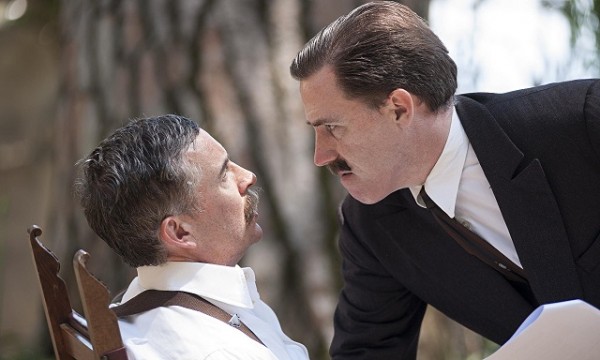 There is a more dramatic side to the film too, with both men struggling to come to terms with mortality, aging and problems within their own families. Coogan’s career has hit a downward slope, and faced with a stressed out wife on the other end of the phone Brydon finds himself getting a bit too close to a young deckhand. These quieter moments feel like they may have been given a lower priority in the cut from six episode show to film, but they are still handled deftly and sit well with the rest of the film- there’s obviously more than a grain of truth to some of the ruminations (those regarding career choices and getting older rather than extra-marital affairs), and the friendship between the two actors is obviously genuine.

Director Michael Winterbottom rightfully lets his two leads take most of the attention but the beauty of the Italian countryside is never far away. The six restaurant tour takes in Liguria, Tuscany, Rome, Amalfi and Capri, and the verdant landscapes, shimmering ocean and beautiful light will have the audience longing for a trip to Italy of their own. Brydon and Coogan are invariably visiting hotels and restaurants on the luxurious end of the spectrum, rounding out all that natural beauty with hotel suites and terraces once visited by the poets and actors that dominate so much of the conversation.

The Alannis Morisette soundtrack may seem like an odd choice given all that wealth and luxury, but somehow the combination of her 90s chick rock and the two middle aged men in a Mini works, with the odd piece of Verdi or Puccini pushing its way through the tunes of Jagged Little Pill to give a suitably grand atmosphere to some of the spectacular views. 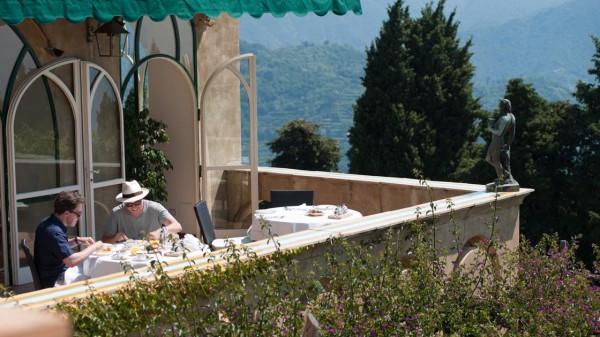 The Trip to Italy isn’t a sequel that builds on its predecessor, but given the three year gap between outings it’s easy to forgive the replication of plot and structure. The Brydon-Coogan partnership will always be the selling point of the series anyway, and the improvisation skills on show here are tremendous; both actors enjoy themselves but Brydon is the stand out. Some of the references will fly over the heads of younger or non-UK viewers, but there’s still a lot of gags to enjoy no matter your vintage or tastes.

A six part series may do more service to Brydon and Coogan’s skills than a film with a running time of under two hours, but The Trip to Italy is still a great option for those who haven’t managed to catch the television show. It has plenty of laughs and to boot you can leave the cinema craving pasta and humming Alannis Morissette- what more could you ask?