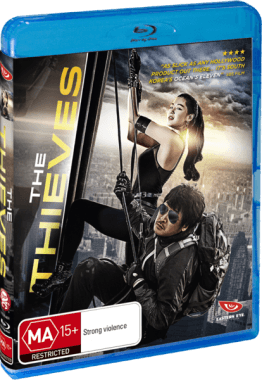 Korean pop culture, or at least the stuff that’s being exported, has a way of taking what used to make American entertainment the best in the world and giving it an extra layer of polish. It seems to be that American blockbusters these days hammer out set piece after set piece, with little consideration about what joins them together. Studios have rightly deducted that audiences will assume that the content is linked because it comes right after the last bit, throwing consistency to the wind. I find that lack of continuity frustrating.

One of the reasons I find myself enjoying Korean films more than their American counterparts these days is that Korean directors still understand how to construct a water-tight plot, a skill that is a requirement when approaching this kind of movie. The heist film genre is almost quintessentially American – getting rich by using style and wit alone. Here we see a film that uses all the tropes we expect from the genre and executes them in a way that isn’t hackneyed or makes you want to scream out ‘bullshit!’ (I’m looking at you Ocean’s Eleven remake).

There’s little background given for the characters that isn’t solely for the purpose of exposition, which goes against the grain for many classic heist films. Usually there’s a reason to justify why we want to root for a bunch of criminals. In ‘Dog Day Afternoon’ Pacino is raising money for his lover’s surgery, in ‘The Bank Job’ it’s hard done by down-and-outers looking to capitalise off the elite. In ‘The Thieves’ they’re just thieves. That’s what they do and they do it well. Not that it’s a significant issue I guess but it’s a telling sign that this movie is most definitely meant to be consumed with a massive wad of popcorn in one hand and the other tightly clenching the seat. The film starts with a cheeky heist that demonstrates the roles each thief has in their clique – as well as showing off the amazing cast that has been assembled for this picture. Chewingum (Hae-suk Kim), an aging alcoholic who has a million covers, is the faux-mother to the acrobatic Yenicall (Gianna Jun) who both work for Popie (Jung-Jae Lee). Popie is the man with the plan, or the man who is handed the plan by Macao Park (Yun-seok Kim). The two have a past that entails all kinds of betrayal, including a shared history with the team’s recently released safe-cracker, Pepsee (Hye-su Kim), whose gaol-time relates to this mysterious past. Oh, and there’s Zampano (Soo Hyun Kim), which the back cover says is the strategy man but I’m pretty sure that he’s just there to be really cute. 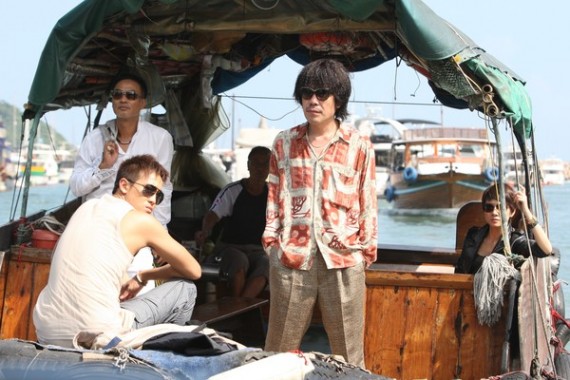 If it sounds complicated, it’s really not. Everything is explained in a clean cut way, where it’s not demonstrated directly for the camera it’s explicitly stated. So we have our team, who are all assembled by Macao Park to meet with a team from Hong Kong to pull of the heist of the century. Originally, when the Hong Kong team was introduced they were presented as such creepy assholes that I thought there may be a semi-racist trans-Yellow Sea rivalry being depicted. As the film opens up and friendships, romances and rivalries develops we see a more rounded vision of these characters come to the fore. The Hong Kong team is filled with some amazing actors, too. Chen (Simon Yam) leads their squad, Julie (Angelica Lee) has a surprising agenda of her own and Andrew, (Dal-su Oh) who is a complete asshole, is the only Korean in the Hong Kong group. A few other characters fill out their gang but they get little screen time. After the two teams meet, they get straight to work by traveling to Macau and setting up base. A charming rivalry is depicted as they start scoping out the target – a 318 carat diamond stashed in a casino belonging to the brutal gangster Wei Hong.

The film is tightly constructed into 3 clean-cut acts. I won’t go into the content of acts two and three because duh. It follows the formula ‘to a T’. There’s the set up, the heist, then the ramifications. ‘The Thieves’ knows this and plays this structure like a violin. The theft itself has plenty of twists and turns but it never loses the audience. There are no out-of-nowhere plot twists. Each twist is validated pretty cleanly. The sheer amount of players in the theft makes things complicated but not overwhelming. Each motive is explained efficiently, helping to both develop the characters and keep the narrative moving. This is not a gadget heavy movie, sure there are a few tools that would be pretty expensive to attain but there’s no hacking the mainframe or doing ballet over lasers. The realism of each technique used to exploit the security in order to pull off the job stops this movie from going over the edge in the name of spectacle. There are amazing set pieces, don’t get me wrong here. Deftly controlled manoeuvring between the various cogs that make up the theft keeps the audience in the loop while only feeding us the information we need to know; allowing the film to hold onto that sense of suspense. 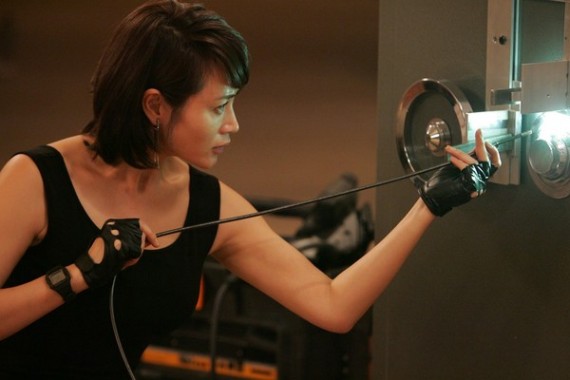 Act three escalates this film out of a pure heist film and moves into action territory. Personally, I feel like this is a great move. ‘The Thieves’ isn’t afraid to pull punches here. Escaping the casino or Macau is not clean for our protagonists and things only get messier when they return to Korea. Some of the choices are genuinely shocking and are as surprising as the twists within the caper part of the film. Intrigue is maintained during this section while the film ties up its loose ends. Ending a heist film is make or break. Frank Sinatra’s ‘Ocean’s Eleven’ will never be beaten for a jaw dropping final twist in this genre and ‘The Thieves’ doesn’t want to take itself into that bleak territory. Light-hearted isn’t exactly how I’d describe it either. Satisfying will have to suffice for the sake of this review.

With so many great locations it would be abysmal if they didn’t get their fair share of screen time. Each city is introduced with a wide shot and a title card with its name, pulling back to reveal our cast. It not only looks great, establishing both the location and the decadent lifestyle of the thieves. I mentioned earlier that the film is shot in a way that we’re never confused as to where we’re up to in the heist or why something in particular is happening at that time. The establishment of locations in which key events of the heist are required to occur in is handled deftly. A special effort has gone into making these locations look bright and energetic. A choice that speaks to the idea that writer & director Dong-Hoon Choi had a complete picture in mind before he started. The urban landscape is caught quite well here, there’s a certain beauty to the chaos of Asian cities from dingy back streets and apartments to fabulous buildings and monuments. 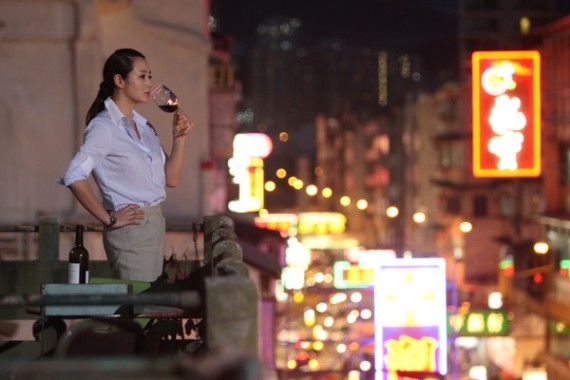 Yeong-hwan Choi, the cinematographer, makes everything pop in terms of image definition and the mainstream genre. It suits this film perfectly. The casino interior is a giddying environment, yet spatially aware. The logic of the location is of extreme importance when the core element of the film centres around the ingenuity of manipulating that space. I never had the feeling that somebody had just run 500 metres in 2 seconds or that they’d cheated with slick editing. Sure, a dramatic exit is punctuated by an all too fast disappearance once or twice but that’s a stylistic choice I’ll let slide. It certainly doesn’t happen during the caper. Also worth noting – the majority of the cast look amazing in and of themselves.

The audio is full of nods to the influences this film draws upon. There’s a very 60’s feel to the introduction heist. Not only does the technique they use to boost the artifact feel like it’s from ‘The Sting’ or another film from that era, it’s punctuated with a very ‘Mod sounding’ score. It’s light-hearted, energetic and exactly what that sequence called for. Unsurprisingly, there’s nothing experimental about the score or the foley, they’re trying to tell a straight up story about a theft here. A car crash scene is articulated very astutely by the sparse use of sound but that about sums it up for anything unique here. Often most of the noise is ambient when not lifting the tension and I think that works for the best, particularly with the dialogue. 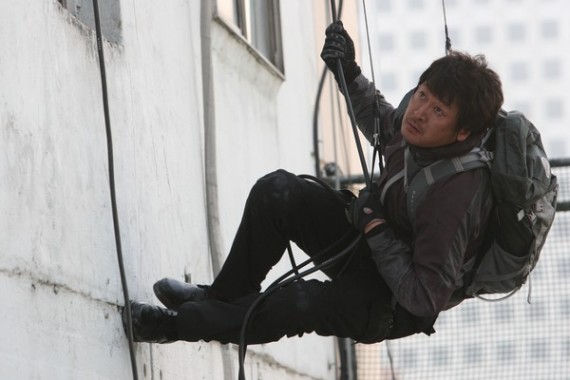 Interestingly, as the protagonists are multi-ethnic and multi-lingual, the use of languages has a particular purpose. Some characters speak Cantonese, others Korean, there’s a bit of Japanese throw into the mix and when they group together English is used as a common language. It allows the characters to mock each other openly without losing face which is a great character development tool. Bringing their relationships to the fore without having to show another scene where they’re all bickering behind each other’s backs is economical with screen time and a cool device.

You could take or leave the extras on the disc for this film. They sum up to around 10 minutes altogether and don’t give any real insight. There’s an introduction to the characters which feels like a promo piece they had lying around so they chucked it in on the cheap. The behind the scenes feels very similar. It clocks in at around 5 minutes and doesn’t really give you much insight to how the film was actually made. I guess it’s kind of intriguing watching them put together a few of the set pieces but there’s not enough time to really get into it. It’s a bit of fluff that they’ve attached simply because they could.

‘The Thieves’ doesn’t break any new ground but who says that’s necessary from absolutely every single film you see? Fans of the genre will appreciate how clean cut the caper actually is – I’m sure a second watching will reveal some continuity errors or something equally as petty. It’s pretty tightly constructed, you’d have to be splitting hairs or resolutely refusing to suspend disbelief to get angry that it doesn’t ‘work.’ That being said, it is mostly stuff we have seen before. There’s plenty of charisma to be found here, and the characters are all endearing in their own way. Lifting the script from yet another heist film to a cool piece of popcorn cinema is the sheer amount of fun and excitement the actors inject into it.

If you’re a fan of Korean film then you should see what all the fuss is about as it is the second highest grossing Korean film of all time – second to the freakishly awesome ‘The Host.’ Maybe it’s all the famous faces, or the strategic inclusion of famous non-Korean actors but you can’t question that the popularity of this film is in part due to its stand alone personality. I’m not saying this is the greatest Korean film out there because it isn’t. What I am saying is that this will be included in the canon of Korean films that you must watch for some time now – at least until something out performs it at the box office.