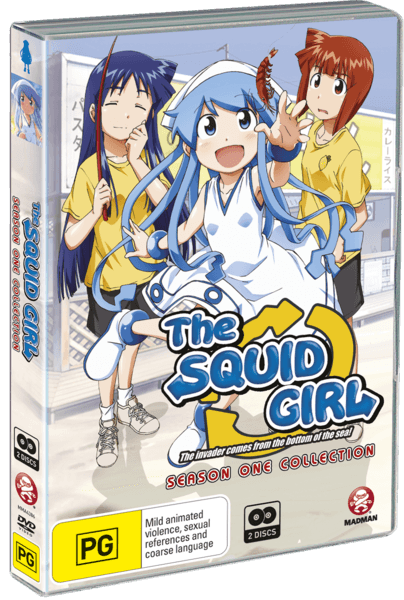 Overview:
Squid Girl is a slice of life comedy series with a charming little supernatural twist. It’s about this peculiar humanoid sea creature named simply Squid Girl, and she arrives on the surface with the intention to invade humans and make them pay for polluting the ocean. Things however don’t go exactly as planned as Squid Girl finds herself getting sidetracked.

This season one collection comes in a two disc DVD set, containing 12 episodes and a few little extras. If you’re seen anime comedies such as Lucky Star, then Squid Girl’s style will be quite familiar to you. 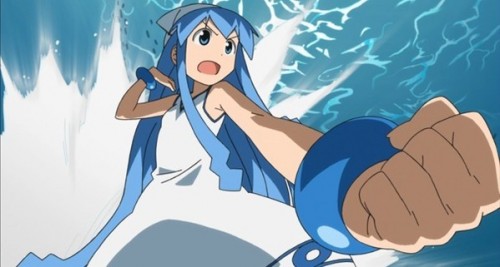 Story:
The anime takes place on a small beach located in Japan where Chizuru Aizawa, her younger sister Eiko Aizawa, and younger brother Kakeru Aizawa, together operate a humble little beachside restaurant called the Lemon Beach House. The peaceful and friendly beach is soon visited by Squid Girl, a humanoid sea creature who declares herself as an emissary from the sea, with a mission to invade humanity and make them pay for the pollution they have caused.

However, she quickly realises that invading the surface world is going to be difficult when she fails to even conquer the Lemon Beach House as her base. She pretty much gets dominated by the Aizawa sisters and ends up being forced to work at their restaurant as a waiter to pay off the property damage. Her skills prove useful as her tentacles allow for speedy customer service and she is also able to provide the restaurant with all the squid ink needed for cooking.

Squid Girl appears to be an ordinary girl, but she is pretty much a squid as she has strong tentacles that appear as her hair, and has squid abilities such as being able to spit ink. As a character, she’s just this extremely enthusiastic, hyperactive, and childish person who is easily fooled and amused.

Each episode features a few short story arcs where Squid Girl learns more about the ways of humans and tries to adapt to their lifestyle. Squid Girl has some interesting interactions with the show’s oddball characters, such as her creepy admirer Sanae Nagatsuki, and Cindy Campbell, an American scientist who’s obsessed with taking Squid Girl to the lab for experiments. Her interactions with people teaches her many lessons about friendship, the good side of humanity, and what it means to be a family in the human world. 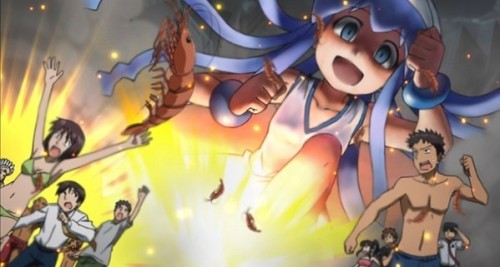 Even while she’s busy working at the restaurant and exploring human life, Squid Girl never loses sight of her objective to take over the human world. She is most happy when people are afraid of her, but she usually just ends up unintentionally gaining the affection of the local populace (with the exception of one character who is deathly afraid of her). While Squid Girl likes to boast how she is better and stronger than humans, she does however fear and respect the eldest Aizawa, Chizuru, who although appears to be very sweet and soft spoken, can be quite frightening when scorned.

It’s a fun little slice of life style of anime, and is generally pretty cute and innocent. The characters are a charming bunch even though they all fit into typical stereotypes. It follows a similar random pace and progression as the Lucky Star series, with some light hearted jokes and relatable social situations. The writing is loaded with puns as Squid Girl often likes to use terms like “Inkvasion”, “Tentacular”, and “You gotta be Squidding me!”. They’re amusing at first but after a while the charm wears off and it gets a bit cringe worthy and annoying.

It’s a short and sweet 12 episode journey, something you can sit back and enjoy with your brain turned off. The characters are fun and each episode is generally a bag of laughs. Squid Girl herself is someone who will easily win you over with her quirky and adorable behavior.  On a random note, there are some pretty cool Sega references thrown into this anime that you’ll have to keep an eye out for.

Visuals and Audio:
Squid Girl has a bright, vibrant, and colourful look to it and comes across as happy go lucky visually as it does in story and writing. The art style is nice and clean and it animates nicely too. It’s a fun show to look at and all the bright colours help make it visually pleasing and cheerful. The character designs, while generic, are still pretty charming with Squid Girl herself obviously stealing the show in terms of uniqueness. Her design is simple, yet she manages to portray her ‘squidness’ quite well.

The music in this anime is upbeat and cheerful, such as the show’s opening theme, which has this hyperactive pop energy to it. Interestingly, there are some sad and serious moments in the anime, particularly the credits theme which is this really mellow song.

The English dub, just as early reports have suggested, isn’t exactly easy on the ears. Eiko in particular sounds the absolute worst. Still, the dialogue at least translates well into English and retains the quirky ‘Squid Humour’ nicely. Some characters actually sound alright, with Squid Girl retaining her hyperactive demeanor and characters like Chizuru sounding pretty close to their original Japanese dub. 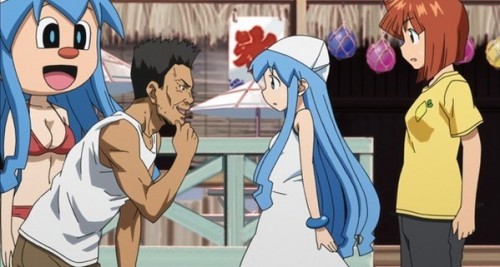 Extras:
The second disc of this collection contains a few little extras, including an interview with the Japanese voice actress of the Squid Girl character, Hisako Kanemoto, who even takes a moment to teach viewers how to make their very own squid girl hat out of paper. There’s also a short and extremely odd OVA episode that is based on this unusual and awkward dream sequence shown in the main series. Nothing particularly exciting, but it’s nice to have a little extra in this small two disc collection.

Overall:
Squid Girl is a fun little series, meant to be enjoyed for what it is and not to be taken too seriously. If you enjoy shows like School Rumble and Lucky Star, with their random and light hearted sense of Japanese humour, then you’ll enjoy the quirky and adorable charms of Squid Girl.

It’s a nicely produced collection with some cool extras, and while the English dub is far from pleasing, you can also switch to the original Japanese dub. Season 1 of Squid Girl is an enjoyable and laidback viewing experience and is recommended to fans of the slice of life genre who want something non-serious.