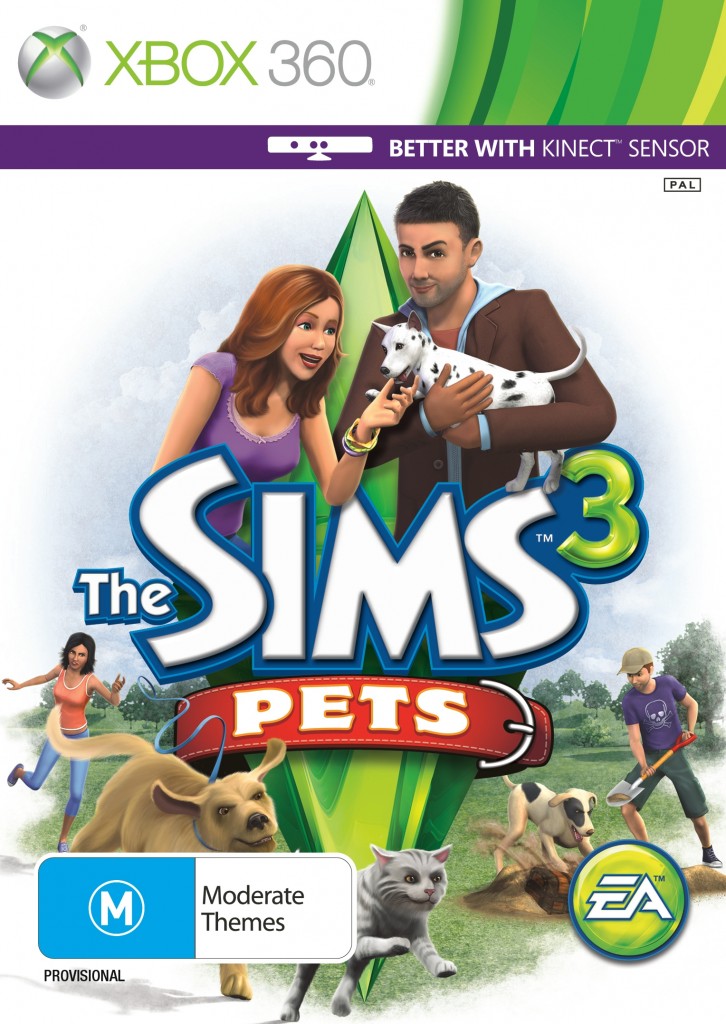 The Sims games have traditionally been a PC-only affair, with a few console spin-offs here and there over the years. The Sims 3 Pets is the latest and 2nd console spin-off in this latest generation of Sims games and brings with it what players have been bugging the EA forums with the most, pets of cause. 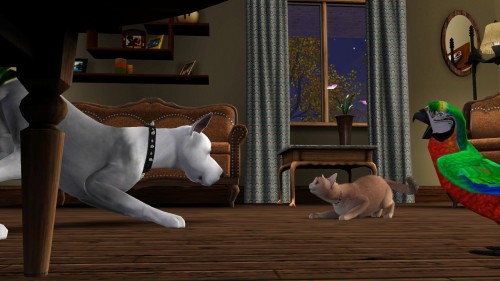 Like all Sims games, The Sims 3 Pets does not contain an actual story mode. But that’s fine, because the joy in The Sims is creating your own story with the Sims and animals you create. There are a few winks to some elements of story in the game. For example, the town of Sugar Maple Coast is filled with plenty situations and scenarios, that range from ghost sightings, hidden treasure and a very, odd if not spooky family.

However the basic storyline of these are little more than just text boxes that appear in the top right-hand side of the screen and nothing else more. Like previous Sims games each premade household is given a mini-brief/back-story, but again overall the game’s story does not extend anymore than this unfortunately. But with that said, The Sims 3 Pets is the type of game that allows for players to create and make up their own story in their own unique way. 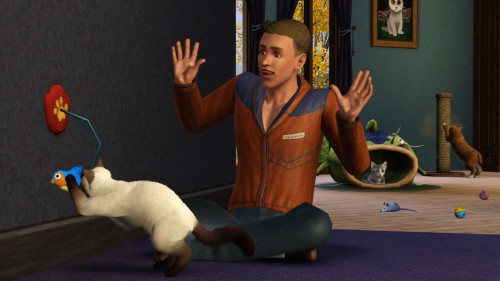 I have mix feelings when it comes to The Sims 3 Pets’ gameplay. On one hand, EA Play has created a very solid, almost arcade-like Sims 3 Pets for consoles without totally stripping away the game mechanics from its PC counterpart. The Sims 3 Pets has been modified to fit in on consoles, and the conversion here isn’t that bad. Yet on the other hand, The Sims 3 Pets is plagued by severe glitches which I’ll get to later in the review, but for now the good parts of the game.

Players will get a full Sims experience here, you can fully build and decorate a house from the ground up if you want to (Just be cautious of the fire meter which is quite restrictive) and you can fully customise both your Sims and pet. There are a total of 30 pet traits that can be mixed and matched to suit your pet, along with a wide range of different breeds of cats and dogs. You can modify their traits, looks and clothing to create a sim or pet that is truly unique. And defiantly by going for the more outrageous traits the better the gaming experience becomes, as it’s interesting if not hilarious to see a bunch of counter traits work against each other. I had a Sim that was allergic to fur but was a cat lover, and as you can imagine hilarity ensued. 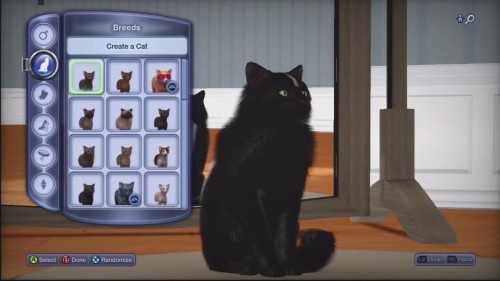 As stated before, The Sims 3 Pets on consoles feels far more arcade-like than the PC version. Whilst this isn’t exactly a bad thing as I suppose an arcade feel suits this console spin-off, it takes some time to get use to. As you play through The Sims 3 Pets, you are constantly given challenges and mysteries to solve which in turn unlocks Karma Points. These grant players god-like powers that can do a variety of good things like boasting a Sims mood or transforming Sims into pets and visa versa, as well as evil things like dropping a meteor from the sky or releasing a wave of illness around your Sims. And these of cause are fun to use and they really do bring something different and fun into game.

Also adding the game’s overall arcade feel is the inclusion of the new role as ‘Mysteryologist’. As you progress through the game, you can become a Mysteryologist by applying at the Town Hall and thereby are entrusted to find and solve mysteries that plague the town of Sugar Maple Coast. These require you to bring along your furry friend to help out and solve the mysteries that range from finding buried treasure to ghost hunting. These all require your pets to be highly trained in their receptive skills: hunting for cats and digging for dogs. 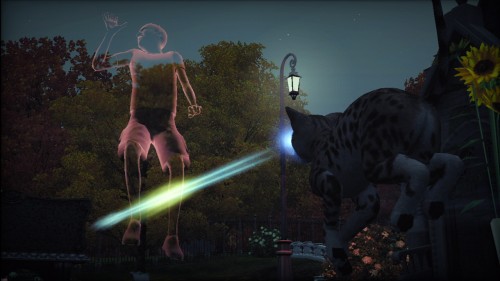 While the gameplay overall functions quite well, it is unfortunately plagued by some serious technical glitches, awkward controls, loading screens and most annoyingly clusters of menus and text boxes. The worst offender of the bunch is a glitch that seriously lags a Sims’ action (usually occurring during fast-forward mode), leaving Sims frozen for a prolong period of time, staring blank into space before finally executing the task you choose them to do. Not only this, when in fast-forward mode the game suffers a massive choppy slow down.

And on top of this, are the annoying menus and text box screens which the game is too heavily bogged down in. I’m sure down the track EA will release a patch that will fix many of the technical issues that I came across. But at this point in time The Sims 3 Pets is a slow affair, with all these technical issues creating a very rough Sims experience on consoles. Much patience is needed to sit through the various loading screens. If I want to simply switching from live mode into build mode – Loading screen, queue up a few actions for my Sims to take around town – Loading screen, follow my Sim into another location –Loading screen…. I think you get the picture.  Installing the game onto your hard drive may be an effective solution to this problem as it will speed up these load times, but it won’t get rid of the fact that your game will still be interrupted by a 3-5 second loading screen. 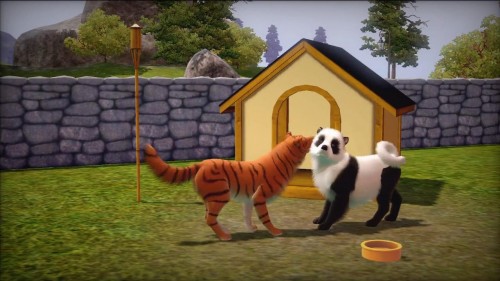 The Xbox 360 version of The Sims 3 Pets feature Kinect voice controls whilst I was unable to test these out myself as I do not own a Kinect, however the addition of voice controls is a certainly plus for gamers. The simple integration of your voice into the game is a natural progression of the game’s controls. Coming from the PC Sims’ keyboard and mouse to The Sims 3 Pets on console with a control is quite alienating at first. The game has a few awkward controls that will need some time to get use to.

Every time you select a Sim, object or anything, the game automatically pauses so you can select what you want to do with it. This means that you can’t exactly queue up multiple actions for all your Sims and pets to complete like you would on the PC. Hmmm…yes quite awkward at first but you soon get use to it as the game forces you to take a different and more slower approach to playing the game on a console.

The Sims 3 Pets on consoles retains the cartoony stylised visuals from the PC version, if not downgraded just a tad. The overall look and feel of the console version is on part with its PC counterpart, with very little noticeable changes between the two. Audio is in the same boat here, with many if not all sound have been taken from the PC version. Overall graphics and audio are top notice, the game looks and sounds like a Sims game. The Sims game have recently become renowned for their simlish version of real life songs, and The Sims 3 Pets features a few interesting simlish versions of popular songs such as Plan B’s “Stay Too Long“, Kimbra’s “Good Intent” and Erasure’s “When I Start To (Break it all Down)” just to name a few. 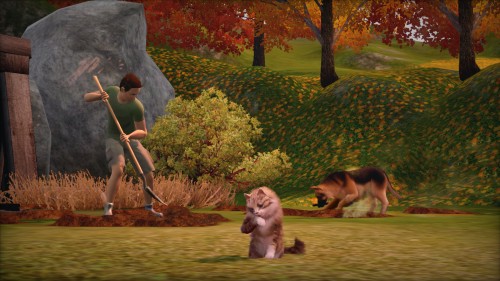 The Sims 3 Pets for consoles is an interesting step for the series. While technical glitches and issues plague the overall strong gameplay foundations, The Sims 3 Pets finds its strengths in its blend of arcade style and sandbox gameplay. A fully-fledged Sims experience complete with pets can be found and played here in this game, but just make sure than your patience enough to wait through the loading screens, menus and annoying text boxes that pop-up more than they should.