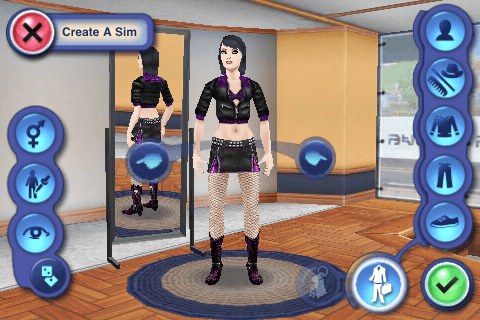 Ever since the Sims first came out and started stealing away days at a time of my childhood I’ve always had a soft spot for the game. I don’t know if it was the whole playing God thing, or maybe that I was just a control freak, but for chunks at a time all of my waking hours were spent taking care, growing and sometimes purposefully killing these little simulated people. The release of the Sims franchise on iOS could have been a half-baked, barely there game and I would still devote time and effort on it even if it made me hate myself a bit. Fortunately, EA gave me a good game that I am proud to spend hours on. 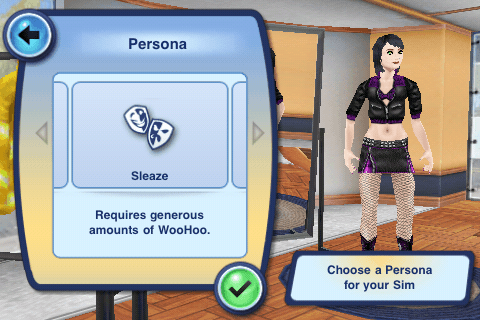 The Sims is always a very personal journey depending on how much of a masochist or narcissist you are (seriously, did anyone else make themselves and their house or am I just crazy?). So, I offer you my personal journey and what I came up against in the game.

First of all, creating a new character. There is far, far less customisation than usual but given that in the PC version you can control pretty much every single aspect there is, this is to be expected. There are nine different facial combinations you can choose from, although what annoyed me was most of them had unsightly freckles. I got over this by making my character wear the thickest eyeliner ever applied that must have been done with a small paintbrush.

Then you choose your outfit with a few different colour themes, your outfit pretty much goes with the career you want to take up. My outfit choice? Classy stripper! Tiny jacket, fishnet stockings and all.

Then you pick your Sims ambition in life, there’s a range of them from the standard Jack-of-all-Trades, to Music Genius, to my choice – Sleaze. As a sleaze my Sim gets a kick out of having ‘generous amounts of Woohoo’. Classy quickly turned to sleazy. 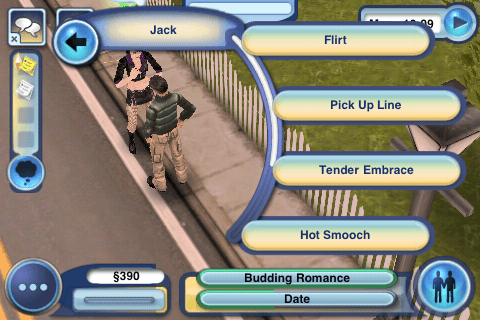 Then of course you choose a name and I decided to give my Sim the perfect stripper name – Sunshine.

The Sims 3 Ambitions app ‘Create a Sim’ section definitely cut a lot of the usual corners that EA likes to brag about, but I kind of liked it. I usually just like to get into the game, but for someone who really loves to spend hours creating the perfect Sim (or perfectly difficult), this will disappoint.

You need to attend a job interview, which is far more realistic than past Sim installments where you decide to get a job and then get it. Perhaps the GFC is hitting Sim City. 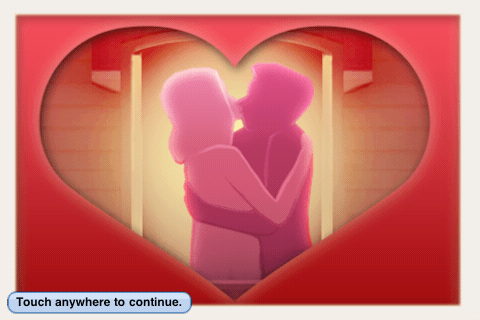 The controls are fairly good considering they’ve been made far more concise. They’re quite user friendly and I didn’t run into much trouble, most things were self explanatory or required some exploratory swiping around the screen. The screen is well set out, with needs easily displayed along the bottom and wishes along the side, everything is easy to get to and good for a quick glance at their stats. You can also edit their appearance when they’re at home, which is new. I guess if you want to change careers and decide that a chef’s uniform isn’t suitable for a firefighter this would come quite in handy.

In terms of travelling into town they have certainly shrunk it down, but I actually kind of like it. It doesn’t cause lag and it’s easy to navigate. Your Sim is a tiny coloured person-shaped figure which glides around the map from afar but once you decide to interact with someone it zooms in to show the two Sims. As my Sim was Slutty McSlutface I had to do a lot of this meet and greeting. In terms of making friends it takes a shorter time than usual and is far less annoying. There are bars down the bottom of the screen showing your friend metre and it fills up quickly, within hours I had a partner and got him back to my place for some Woohoo! And a woman was shortly thereafter. It’s a good thing Sims don’t get STIs. Or WTIs, as it were.

Of course there are still the Sims who will shake their heads and gesture wildly if they dislike a certain social thing you are doing but I like that they’ve kept that personal aspect to the NPCs. 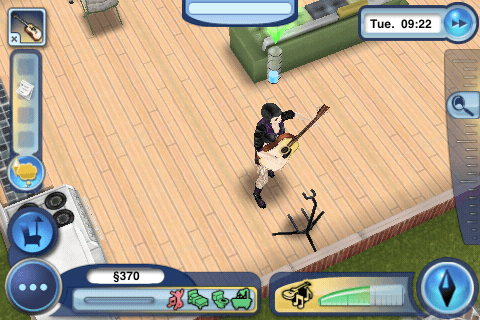 They’ve kept the wishes system in place, your Sims are driven by wants determined by their traits or ambition and you can fulfill them and keep your Sims happy or ignore them cos they’re stupid and no you are not buying them a new fridge, the old one works perfectly well.

You do have to spend some Simoleons buying a repair kit or recipes if you want to do stuff yourself or eat more than a quick meal. One surprising inclusion in the game was that when you repair stuff it takes you into a mini-game to do it yourself. Plus, this way it’s on you if you stuff it up instead of your possibly incompetent or far-more-competent-than-you Sim.

They’ve kept the Sims soundtrack, which I think was a great choice. After all, they’re aiming it for the Sims-established market and the people in that market probably get gooey warm feelings when they hear that music. I know I do. The voice clips of Simlish are limited and you tend to want to switch it off when they’re conversing because if you’re doing a series of different things from the same submenu you will go insane. 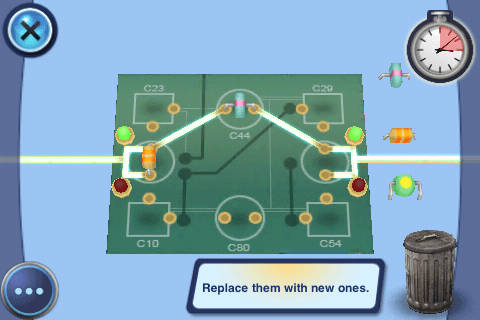 The game looks great, the Sims translates well onto iOS and the developers have managed to strike a great balance between detail and short loading times. And for you pervs out there, they wear their underwear to shower. But you know someone’s going to develop a patch to fix that.

A must-have for any Sims addicts out there, or anyone who has really long public transport commutes and wouldn’t mind getting crazy obsessed with a game. EA has done a great job staying true to the Sims franchise and delivering an above board title for iOS.