What’s the best way to hide a USB drive containing top-secret information? According to Springfield’s best and brightest (i.e., Mr. Burns and Mayor Quimby), in a donut. As they transport the device to carry out their nefarious plans, an accident sees Homer get his hands on the donut for a brief moment, before Quimby steals it away again. Convinced the donut must be the best tasting one ever – why else would it be so heavily guarded? – Homer gives chase.

This is all the story the player is given in The Simpsons Arcade, as they control Homer on his quest to retrieve the special donut and, unknowingly, foil Burns and Quimby in the process.  But that’s all that is needed. iPhone games don’t need to be too deep. The Simpsons Arcade knows this, and even jokes about it: the intro cinematic describes the motives of Springfield’s bad guys as “their diabolical plot to steal all of Springfield’s… uh, I don’t know. Natural resources or something. You’ve probably skipped this part by now anyway.” For a game to break the fourth wall like this is rare, and led me to want more games that don’t take themselves so seriously. 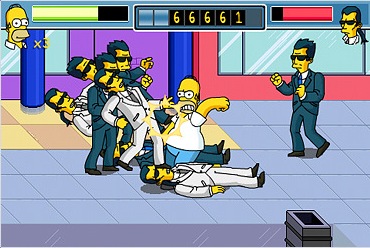 Like so many licensed games before it, the gameplay in The Simpsons Arcade is its weakest aspect. It’s solid, but it gets repetitive pretty quickly. It takes its influence from sidescrolling, beat-em-up arcade games like Double Dragon, requiring players to move Homer on a 2D plane, beating up endless, faceless goons. Although it’s a call-back to the first Simpsons game produced (a sidescrolling brawler released in 1991) the gameplay and the setting just don’t quite mesh together. Having Homer go around beating people up is out of character for him, and the game’s humour makes it feel like it would have been more at home as a platformer, or something other than a brawler. But once you forgive that minor stumbling block, the game can become quite fun.

Homer’s abilities are limited to a punch, jump, a body slam, and a charge attack. The strategy to just mash the punch button is an effective one, and could get you through much of the game. However, several different enemy types are thrown at you in an attempt to vary your techniques. In addition to your garden variety goon, with only a simple punch attack, some perform a charge or a fly kick, forcing you to dodge before attacking. Others can only be defeated by your charge attack. Or you can perform a body slam to knock down large groups of enemies. The options are there, but for the most part, simply punching will see you through. 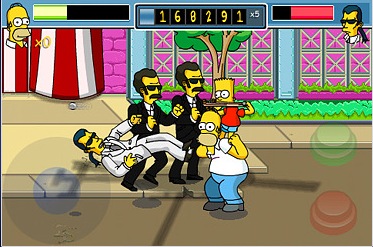 To help dispatch whoever’s goons they are, weapons can be found throughout, which can be used only a few times before they disappear. These include mallets, baseball bats, boomerangs and tazers, all of which can defeat goons in only a few hits. But the most powerful powerups – and the most inventive – are the other members of the Simpson family. Occasionally, an icon of another character can be found, which summons them to help out. Bart will skateboard in, jump on Homer’s shoulders, and fire his slingshot repeatedly for a short time. Lisa will pound the ground with a skipping rope, knocking over every enemy onscreen, and Marge carries Maggie in, who bonks Homer on the head with a toy mallet, sending him into an invincible rage attack.

The controls are sufficient, but at times intrusive. As with many other iPhone games, Homer’s actions are controlled with touch buttons in the corners of the screen. The left side controls movement, and the right has the punch and jump buttons. This means that occasionally Homer or his enemies will walk into the area of screen obscured by your thumbs. It’s a minor gripe, but this seems to be a design oversight with the iPhone, not the game itself, as many games suffer the same issue. Thankfully, the buttons and movement pad are quite responsive. 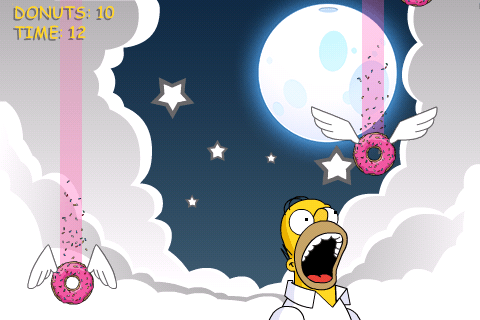 One aspect of the gameplay that is innovative is the use of mini-games, to replace the more mundane aspects of video games that players are accustomed to. When a life is lost, the screen cuts to a close up of Homer unconscious on the ground, and the player must swipe across the screen, left and right, to slap him back into focus. With a yell, he gets back up, and the game continues. There are other mini-games between stages, rewarding success with an extra continue, which is far more fun than simply finding continues during the game. One plays by tilting the device to move Homer’s head across the screen, to collect falling donuts in his mouth, while avoiding broccoli. Another requires rapidly pressing the two buttons to inflate a giant balloon. Removing the arbitrary collection of pickups in this way is an innovation, and the mini-games as an alternative is a much more entertaining method of rewarding players.

The visuals are excellent, capturing the series perfectly. While the cinematics have the unmistakable mark of Flash animation to them, they look good on the iPhone nonetheless. The in-game animations are also smooth and enjoyable; in particular, Homer’s run cycle is a visual treat. All the familiar characters look spot-on, and animate seamlessly. The use of well-known characters as bosses is a welcome change from the faceless goons through the levels, and their individual abilities will shake up your play style.  Prepare to fight the likes of Chief Wiggum, Mayor Quimby, Krusty, Rainier Wolfcastle and Mr. Burns, and prepare to enjoy it. 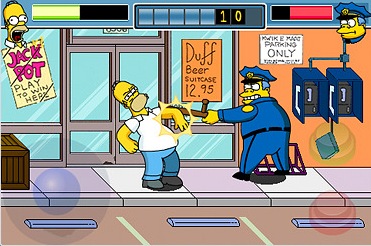 Unfortunately the environments seem a little under-used – the potential to move through familiar locations goes somewhat untapped, and when a recognisable location does appear, such as Moe’s and the Kwik-E-Mart, it’s all too brief, and has little impact on the gameplay. Instead we get lengthy sections down unfamiliar streets and corridors, which don’t seem very Simpsonsy. The possibility for the funny signs and background gags the TV show is famous for also goes unused.

The Simpsons Arcade suffers from several flaws, given it is a licensed game, and an iPhone app. But although it may not be the most addictive app on the iOS, it is definitely worth a try if you’re a Simpsons fan. And let’s face it: who isn’t?