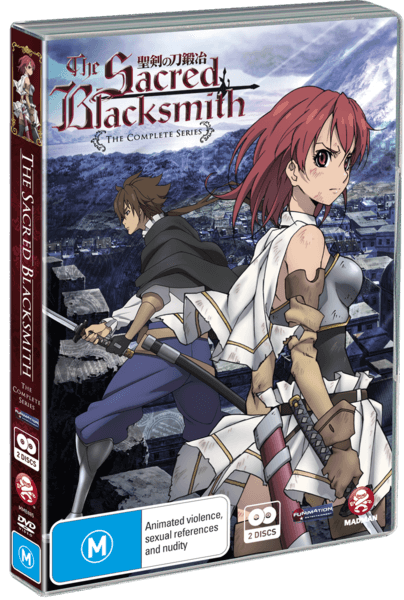 Overview:
Fantasy series can sometimes be seen as a dime a dozen but in the anime world this is far from the truth. Many fantasy series often based around historic Japan or China with few focusing on creating a new world all of their own. The Sacred Blacksmith sets itself apart by creating a fantastical world set in medieval times. Originally created as a light novel series by Isao Miura, The Sacred Blacksmith was adapted into an anime back in 2009 by Manglobe. Now that it has been fully dubbed and released by Madman Entertainment, does The Sacred Blacksmith forge a powerful new show?

Story:
Nearly fifty years ago a great war occurred. Named the Valbanill War it was also the war where the use of something called a Demon Contract was common. A Demon Contract sacrificed a human’s body to summon forth a powerful demon or create a devastating weapon. These contracts were banned once the war ended in an effort to create a peaceful world.

Now we join our main heroine Cecily patrolling the streets of Housman as usual but she is attacked suddenly by a crazed veteran of the Valbanill War who destroys her weapon and has to be saved by a mysterious man named Luke who wields a katana that neatly slices through the veteran’s weapon and causes him to run away. Despite her quick defeat and loss of her weapon she quickly finds herself fighting against a monstrous Demon that attacked a caravan carrying precious cargo and is again saved by Luke who demonstrates surprising magical powers and forges a magical katana that defeats the demon quickly. 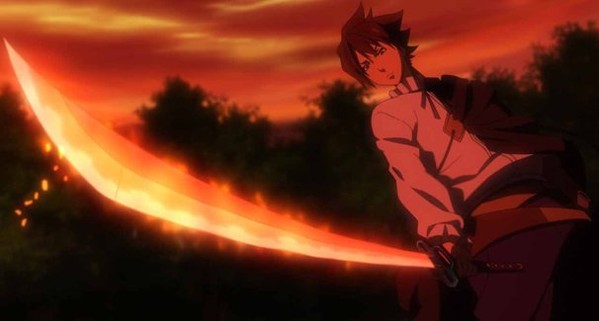 Cecily consistently goes to Luke’s house and asks him for a katana of her own and is turned down consistently. Then she is shown that she will be the protector of a magical sword known as a Demon Sword, only it is much more than a simple sword. The knights around the city of Housman are on the lookout for someone that is called the “Man in Black” who seems to be in the center of every demonic appearance and with more wielders of Demon Swords showing up in the city things quickly become hectic in Cecily’s knighthood.

The storyline seems to have a lot of trouble on finding a place to settle down unfortunately. Despite plenty of plot points being introduced over time the series perhaps falls victim to its limited airing schedule of 12 episodes. What I mean is that story arcs often feel very rushed and the series loses focus quite often. The arc featuring Charlotte E. Firobisher takes a lot of time to get going and develop, only to quickly get resolved when the arc finishes up. This then leaves only a few episodes to close out the series with the “Man in Black” being revealed and Luke and Lisa’s past coming to light. Lots of plot holes were left open which could be resolved in a second season but unfortunately The Sacred Blacksmith leaves a lot to be resolved in the end.

Artwork:
The Sacred Blacksmith is very well drawn with character animation being fluid even during some of the heavy combat scenes. It is obvious that Manglobe spent plenty of time with the battle scenes themselves as the special effects for the battles are top notch. Whether it is an elemental attack from one of the Demon Swords or the magic used by Luke to form a magical katana the animation is quite striking and pleasing to the eyes. 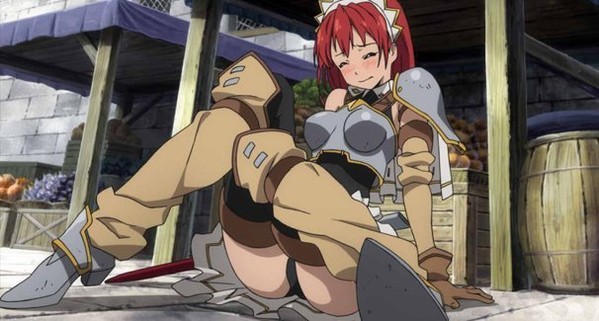 The characters themselves are drawn well with unique clothing, although it is hard to believe Cecily would receive much protection from her armor. Plus the breastplate is literally a breastplate. Moving on, the demons that appear from time to time are very well drawn considering they vary between complete monstrosities to simple mutated animals. At times the designs of the demons strike a large contrast between the humans fighting them which help create the atmosphere that the humans truly are facing powerful foes.

Audio:
The background music is rather forgetful and at times the viewer will find themselves barely remembering that there was background music other for some of the more important fights. The opening and the ending are an extreme contrast with one another as the opening song “Justice of Light” is more dramatic and serious compared to the very lighthearted ending “Miracle Happy Day.” The opening isn’t quite as memorable due to the animation used but the chibi Lisa that goes along with the ending Miracle Happy Day helps it stand out. The opening and ending weren’t translated but did have subtitles to let watchers know what was being sung.

The Sacred Blacksmith has received a full English dubbing. The Japanese voice actors are still there for those who would enjoy that version. The English voice actors provide a great job with the characters that they provide the voices over. I didn’t find any contrasts between character personality and the way that the voice actor portrayed them which is certainly a highlight. Aria’s voice actor is a treat to the ears and Cecily’s shifts between tsun and dere are captured perfectly.

Characters:
Cecily Cambell is a 3rd generation knight from the Cambell household. Despite the fact that her father and grandfather were both well-known knights in the city she has yet to prove herself as a soldier. At the beginning of the series she has little true combat experience and is quickly defeated by a veteran of the Valbanill War and has to be saved by Luke Ainsworth. Cecily is often seen as a bit of an airhead but stays strong to her beliefs that the job of a knight and her sword is to protect the people of the city. Her flame red hair can symbolize that she is extremely brave despite the fact she has little to no combat experience, though she does progressively grow stronger as the series progresses, and refuses to give up even when facing overwhelming odds. After being saved by Luke she constantly pesters him into creating a katana for her and always is around him she eventually shows tsundere like qualities when around Luke. She is often the source of many jokes in the series either due to her large breasts, which do get shown at times, or her beliefs as a knight. As a whole Cecily becomes a hindrance to the story as she is the given the most screen time but also can try the viewer’s patience due to her annoying mannerisms and pestering of Luke even though she only shows that she should deserve a powerful weapon at certain times of the series and the rest find her being more of a joke than a knight. 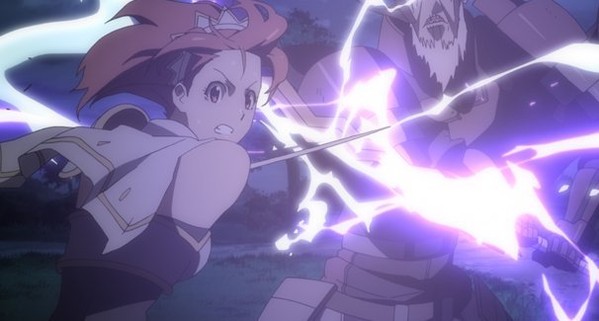 Luke Ainsworth can be seen as the other main character of The Sacred Blacksmith and is the actual blacksmith whom the series revolves around. Luke is a very private person who can be seen as insensitive to those around him due to his arrogant demeanor. He is an exceptional blacksmith who lives in the countryside away from the city that Cecily protects. He is the only blacksmith that is able to create katana in the region but is also able to forge a powerful magical katana in the middle of battle with the help of his assistant Lisa through a contract (spell). He sees Cecily as a pest as he constantly turns her request to forge a katana for her down.  He is very quick to comment on the fact she lacks skill as a fighter and is usually on the receiving end of her anger. Despite all of this however, Cecily begins to remind Luke of someone in his dark past which is explored as the series goes on.  Luke is an odd one to accept at first glance due to his attitude towards the other characters in the series. He can be seen as mean towards the other characters but eventually is fleshed out a bit thanks to being around Cecily, although he still feels out of place among the other characters.

Lisa is Luke’s assistant and lives with him in his house in the countryside. She is also his main assistant who helps him with his blacksmithing but also pretty much does everything for him. Lisa looks like a girl in her young teens and quickly becomes one of the most likable characters of the series with her adorable ways. She is always there to help Luke when he needs her but stands firmly with Cecily in any argument the two get into when she is around. There are a few odd things viewers will notice about Lisa, other than her ability to begin the contract with Luke to create the magical katanas and cannot remember ever being separated from Luke in her life. Her past is a mystery that is explored later in the series but is hinted at throughout many episodes as her ability is used again and again.

Rounding out the main characters is Aria. Aria may appear as a normal, albeit beautiful woman but she is actually one of the most powerful swords in existence known as a Demon Sword. Aria is the Sword of Wind and has the unique ability to change into human form despite the fact that most Demon Swords cannot do this. She has had many previous wielders who have used her to murder and kill thousands of men in the past but has fallen under the protection of Cecily. With Cecily’s beliefs the two form a strong bond and Aria allows Cecily to wield her power whenever she is in danger. Despite being a sword in human form Aria is quick to pick up on the romantic feelings that Cecily feels towards Luke and often teases her about this but retains her kind and caring personality always. 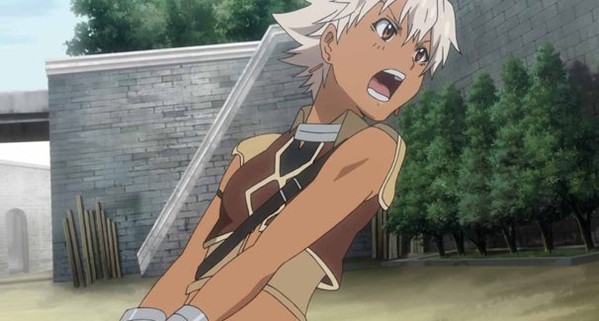 Some side characters that show up for their own personal story arc are Charlotte E Firosbisher and her three followers;  Margot, Penelope and Doris. Each of these girls wields a powerful Demon Sword of their own but only one holds a sword powerful enough to take human form. Charlotte is the illegitimate child of the Emperor and may appear as a spoiled princess initially but quickly develops into a warm character that is willing to work alongside Cecily. Her three followers are often the source of comedic relief as they grow angry anytime anyone says anything detrimental about Charlotte. Unfortunately these characters are given a rather abrupt ending and do not see much story development beyond their arc, instead being pushed out of the picture entirely and forgotten once it finished.

Overall:
The Sacred Blacksmith does indeed forge an interesting story with plenty of unique characters and unique plot points but the blade that came out of the forge is marked with imperfections. The pacing of the story is unfortunately not well handled and important plot holes are left wide open at the end of the last episode. There is a decent amount of fan service but nothing overly exaggerated and the action is certainly a highlight to the series. In the end The Sacred Blacksmith was an enjoyable watch with lots of comedy and action but can leave the viewer disappointed at the ending.

I give The Sacred Blacksmith